We consider matrices formed by a random N× N matrix drawn from the Gaussian Orthogonal Ensemble (or Gaussian Unitary Ensemble) plus a rank-one perturbation of strength θ, and focus on the largest eigenvalue, x, and the component, u, of the corresponding eigenvector in the direction associated to the rank-one perturbation. We obtain the large deviation principle governing the atypical joint fluctuations of x and u. Interestingly, for θ>1, in large deviations characterized by a small value of u, i.e. u<1-1/θ, the second-largest eigenvalue pops out from the Wigner semi-circle and the associated eigenvector orients in the direction corresponding to the rank-one perturbation. We generalize these results to the Wishart Ensemble, and we extend them to the first n eigenvalues and the associated eigenvectors. 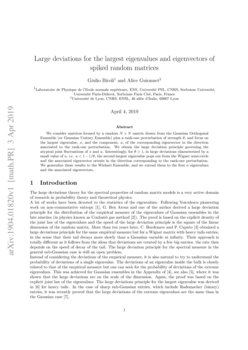 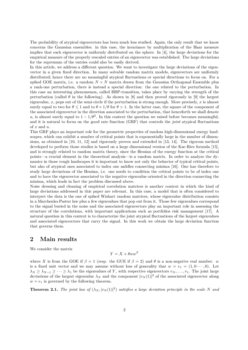 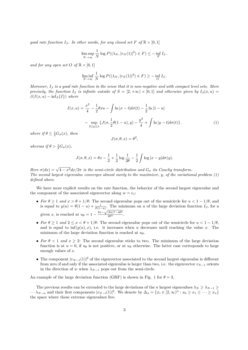 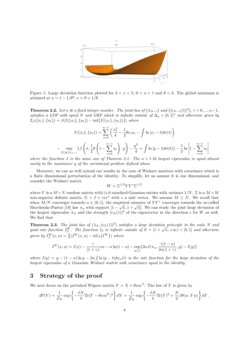 Largest Eigenvalues of the Conjugate Kernel of Single-Layered Neural Networks

This paper is concerned with the asymptotic distribution of the largest ...
Lucas Benigni, et al. ∙

In this study, we derive the exact distributions of eigenvalues of a sin...
Aya Shinozaki, et al. ∙

Eigenvector distribution in the critical regime of BBP transition

The large deviations theory for the spectral properties of random matrix models is a very active domain of research in probability theory and theoretical physics.

The probability of atypical eigenvectors has been much less studied. Again, the only result that we know concerns the Gaussian ensembles: in this case, the invariance by multiplication of the Haar measure implies that each eigenvector is uniformly distributed on the sphere. In

[4], the large deviations for the empirical measure of the properly rescaled entries of an eigenvector was established. The large deviations for the supremum of the entries could also be easily derived. In this article, we address a different question. We want to investigate the large deviations of the eigenvector in a given fixed direction. In many solvable random matrix models, eigenvectors are uniformly distributed; hence there are no meaningful atypical fluctuations or special directions to focus on. For a spiked GOE matrix, i.e. a random N×N matrix drawn from the Gaussian Orthogonal Ensemble plus a rank-one perturbation, there is instead a special direction: the one related to the perturbation. In this case an interesting phenomenon, called BBP-transition, takes place by varying the strength of the perturbation (called θ in the following). As shown in [8] and then proved rigorously in [9] the largest eigenvalue, x, pops out of the semi-circle if the perturbation is strong enough. More precisely, x is almost surely equal to two for θ≤1 and to θ+1/θ for θ>1. In the latter case, the square of the component of the associated eigenvector in the direction associated to the perturbation, that henceforth we shall denote u, is almost surely equal to 1−1/θ2. In this context the question we raised before becomes meaningful, and it is natural to focus on the good rate function (GRF) that controls the joint atypical fluctuations of x and u. This GRF plays an important role for the geometric properties of random high-dimensional energy landscapes, which can exhibit a number of critical points that is exponentially large in the number of dimensions, as obtained in [10, 11, 12] and rigorously proven and extended in [13, 14]. The rigorous method developed to perform those studies is based on a large dimensional version of the Kac-Rice formula [15], and is strongly related to random matrix theory, since the Hessian of the energy function at the critical points—a crucial element in the theoretical analysis—is a random matrix. In order to analyze the dynamics in those rough landscapes it is important to know not only the behavior of typical critical points, but also of atypical ones associated to index one saddles connecting minima [16]. One has therefore to study large deviations of the Hessian, i.e. one needs to condition the critical points to be of index one and to have the eigenvector associated to the negative eigenvalue oriented in the direction connecting the minima, which leads in fact the problem discussed above. Noise dressing and cleaning of empirical correlation matrices is another context in which the kind of large deviations addressed in this paper are relevant. In this case, a model that is often considered to interpret the data is the one of spiked Wishart random matrices, whose eigenvalue distribution consists in a Marchenko-Pastur law plus a few eigenvalues that pop out from it. Those few eigenvalues correspond to the signal buried in the noise and the associated eigenvectors play an important role in assessing the structure of the correlations, with important applications such as portfolios risk management [17]. A natural question in this context is to characterize the joint atypical fluctuations of the largest eigenvalues and associated eigenvectors that carry the signal. In this work we obtain the large deviation function that governs them.

We consider the matrix

w=e1=(1,0⋯,0). Let λN≥λN−1≥⋯≥λ1 be the eigenvalues of Y, with respective eigenvectors vN,…,v1. The joint large deviations of the largest eigenvalue λN and the component |vN(1)|2 of the associated eigenvector along w=e1 is governed by the following theorem.

The joint law of (λN,|vN(1)|2) satisfies a large deviation principle in the scale N and good rate function Iβ. In other words, for any closed set F of R×[0,1]

Moreover, Iβ is a good rate function in the sense that it is non-negative and with compact level sets. More precisely, the function Iβ is infinite outside of S=[2,+∞)×[0,1] and otherwise given by Iβ(x,u)=β(I(x,u)−infS{I}) where

Here σ(dx)=√4−x2dx/2π is the semi-circle distribution and Gσ its Cauchy transform. The second largest eigenvalue converges almost surely to the maximizer, y, of the variational problem (1) defined above.

We have more explicit results on the rate function, the behavior of the second largest eigenvalue and the component of the associated eigenvector along w=e1:

An example of the large deviation function (GRF) is shown in Fig. 1 for θ=3.

The previous results can be extended to the large deviations of the n largest eigenvalues λN≥λN−1≥⋯λN−n and their first components |vN−i(1)|2. We denote by Δn={xi∈[2,∞)n:x0≥x1≥⋯≥xn} the space where these extreme eigenvalues live.

where the function J is the same one of Theorem 2.1. The n+1-th largest eigenvalue is equal almost surely to the maximizer y of the variational problem defined above.

Moreover, we can as well extend our results in the case of Wishart matrices with covariance which is a finite dimensional perturbation of the identity. To simplify, let us assume it is one dimensional, and consider the Wishart matrix

1/N. Σ is a M×M non-negative definite matrix :Σ=I+γee∗ with e a unit vector. We assume M≤N. We recall that when M/N converges towards α∈(0,1], the empirical measure of YY∗ converges towards the so-called Marchenko-Pastur [18] law πα with support [1−√α,1+√α]. We can study the joint large deviation of the largest eigenvalue λN and the strength |vN(1)|2 of the eigenvector in the direction e for W as well. We find that

where I(y)=y−(1−α)lny−2α∫ln|y−t|dπα(t) is the rate function for the large deviation of the largest eigenvalue of a Gaussian Wishart matrix with covariance equal to the identity.

3 Strategy of the proof

We next focus on the pertubed Wigner matrix Y=X+θwwT. The law of Y is given by

Our main goal is to estimate the density of

PN when N is large and to apply Laplace’s method. We infer from concentration inequalities [19] that with ^μN−1=1N−1∑N−1i=1δλi

i.e. we can replace the empirical distribution ^μN−1 with its average. To estimate the other terms, we first observe that since (vi(1))1≤i≤N is uniformly distributed on the sphere, we can represent (vi(1))1≤i≤N as

with independent standard Gaussian variables gi,1≤i≤N, which are real when β=1 and complex when β=2. As a consequence, we see that the distribution UN of |vN(1)|2

Hence the main point of the proof is to estimate

Observe that (wi)1≤i≤N−1 is independent of |vN(1)|2 (as the computation of the joint law reveals). Hence

Recall the definition of spherical integrals:

where e is uniformly sampled on the sphere SN−1 with radius one. The asymptotics of

were studied in [20] where the following result was proved.

The limit J is defined as follows. For a compactly supported probability measure μ∈P(R) we define its Stieltjes transform Gμ by,

where supp(μ) denotes the support of μ. In the sequel, for any compactly supported probability measure μ, we denote by r(μ) the right edge of the support of μ. Then Gμ is a bijection from (r(μ),+∞) to (0,Gμ(r(μ)), with

In order to define the rate function, we now introduce, for any θ≥0, and λ≥r(μ),

In the case where μ=σ, the semi-circular law, then,

Remark that Theorem 2.1 implies the weak large deviation principle which states that for δ small enough,

where it is known that ∥X∥∞≤M with probability greater than 1−e−NcM2 [4]. We refer the reader to [22] for more details. Hence, we only need to prove the weak large deviation principle, that is estimate the probability that (λN,|vN(1)|2) is close to some (x,u).

But λN−1 satisfies a LDP under PxN−1 [4] with good rate function which is infinite above x and below 2, and otherwise given by

where C=inf{x24−∫ln|x−t|dσ(t)}. Hence we deduce by continuity of the limiting spherical integrals [23] that

and therefore, plugging (3),(5) in the above estimate, we deduce that the joint law of (λN,|vN(1)|2) is approximately given by

The law of Y is given by

Here we have denoted

7 Study of the rate function

We can therefore study the optimizer in u of H for a given x.