Generative Adversarial Networks (GANs) have shown great promise recently in image generation. Training GANs for language generation has proven to be more difficult, because of the non-differentiable nature of generating text with recurrent neural networks. Consequently, past work has either resorted to pre-training with maximum-likelihood or used convolutional networks for generation. In this work, we show that recurrent neural networks can be trained to generate text with GANs from scratch using curriculum learning, by slowly teaching the model to generate sequences of increasing and variable length. We empirically show that our approach vastly improves the quality of generated sequences compared to a convolutional baseline. 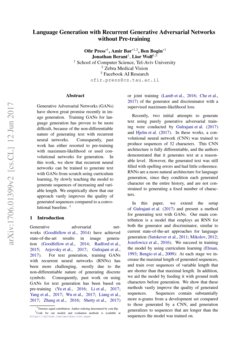 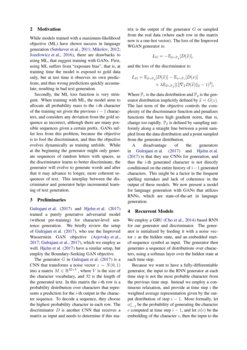 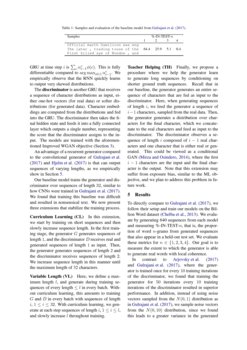 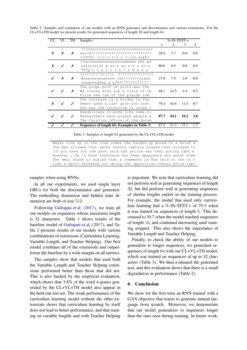 MaskGAN: Better Text Generation via Filling in the ______

GANS for Sequences of Discrete Elements with the Gumbel-softmax Distribution

. For text generation, training GANs with recurrent neural networks (RNNs) has been more challenging, mostly due to the non-differentiable nature of generating discrete symbols. Consequently, past work on using GANs for text generation has been based on pre-training

. In these works, a convolutional neural network (CNN) was trained to produce sequences of 32 characters. This CNN architecture is fully differentiable, and the authors demonstrated that it generates text at a reasonable level. However, the generated text was still filled with spelling errors and had little coherence. RNNs are a more natural architecture for language generation, since they condition each generated character on the entire history, and are not constrained to generating a fixed number of characters.

In this paper, we extend the setup of Gulrajani et al. (2017) and present a method for generating text with GANs. Our main contribution is a model that employs an RNN for both the generator and discriminator, similar to current state-of-the-art approaches for language generation (Sutskever et al., 2011; Mikolov, 2012; Jozefowicz et al., 2016). We succeed in training the model by using curriculum learning (Elman, 1993; Bengio et al., 2009; Ranzato et al., 2015)

: At each stage we increase the maximal length of generated sequences, and train over sequences of variable length that are shorter than that maximal length. In addition, we aid the model by feeding it with ground truth characters before generation. We show that these methods vastly improve the quality of generated sequences. Sequences contain substantially more n-grams from a development set compared to those generated by a CNN, and generation generalizes to sequences that are longer than the sequences the model was trained on.

While models trained with a maximum-likelihood objective (ML) have shown success in language generation (Sutskever et al., 2011; Mikolov, 2012; Jozefowicz et al., 2016), there are drawbacks to using ML, that suggest training with GANs. First, using ML suffers from “exposure bias”, that is, at training time the model is exposed to gold data only, but at test time it observes its own predictions, and thus wrong predictions quickly accumulate, resulting in bad text generation.

Secondly, the ML loss function is very stringent. When training with ML, the model aims to allocate all probability mass to the

i-th character of the training set given the previous i−1 characters, and considers any deviation from the gold sequence as incorrect, although there are many possible sequences given a certain prefix. GANs suffer less from this problem, because the objective is to fool the discriminator, and thus the objective evolves dynamically as training unfolds. While at the beginning the generator might only generate sequences of random letters with spaces, as the discriminator learns to better discriminate, the generator will evolve to generate words and after that it may advance to longer, more coherent sequences of text. This interplay between the discriminator and generator helps incremental learning of text generation.

is a CNN that transforms a noise vector

z∼N(0,1) into a matrix M∈R32×V, where V is the size of the character vocabulary, and 32 is the length of the generated text. In this matrix the i

i-th output in the character sequence. To decode a sequence, they choose the highest probability character in each row. The discriminator D is another CNN that receives a matrix as input and needs to determine if this matrix is the output of the generator G or sampled from the real data (where each row in the matrix now is a one-hot vector). The loss of the Improved WGAN generator is:

and the loss of the discriminator is:

A disadvantage of the generators in Gulrajani et al. (2017) and Hjelm et al. (2017) is that they use CNNs for generation, and thus the i-th generated character is not directly conditioned on the entire history of i−1 generated characters. This might be a factor in the frequent spelling mistakes and lack of coherence in the output of these models. We now present a model for language generation with GANs that utilizes RNNs, which are state-of-the-art in language generation.

We employ a GRU (Cho et al., 2014) based RNN for our generator and discriminator. The generator is initialized by feeding it with a noise vector z

as the hidden state, and an embedded start-of-sequence symbol as input. The generator then generates a sequence of distributions over characters, using a softmax layer over the hidden state at each time step.

. We empirically observe that the RNN quickly learns to output very skewed distributions.

The discriminator is another GRU that receives a sequence of character distributions as input, either one-hot vectors (for real data) or softer distributions (for generated data). Character embeddings are computed from the distributions and fed into the GRU. The discriminator then takes the final hidden state and feeds it into a fully connected layer which outputs a single number, representing the score that the discriminator assigns to the input. The models are trained with the aforementioned Improved WGAN objective (Section 3).

An advantage of a recurrent generator compared to the convolutional generator of Gulrajani et al. (2017) and Hjelm et al. (2017) is that can output sequences of varying lengths, as we empirically show in Section 5.

Our baseline model trains the generator and discriminator over sequences of length 32, similar to how CNNs were trained in Gulrajani et al. (2017). We found that training this baseline was difficult and resulted in nonsensical text. We now present three extensions that stabilize the training process.

To directly compare to Gulrajani et al. (2017), we follow their setup and train our models on the Billion Word dataset (Chelba et al., 2013). We evaluate by generating 640 sequences from each model and measuring %-IN-TEST-n, that is, the proportion of word n-grams from generated sequences that also appear in a held-out test set. We evaluate these metrics for n∈{1,2,3,4}. Our goal is to measure the extent to which the generator is able to generate real words with local coherence.

distribution, since we found this leads to a greater variance in the generated samples when using RNNs.

In all our experiments, we used single layer GRUs for both the discriminator and generator. The embedding dimension and hidden state dimension are both of size 512.

Following Gulrajani et al. (2017), we train all our models on sequences whose maximum length is 32 characters. Table 1 shows results of the baseline model of Gulrajani et al. (2017), and Table 2 presents results of our models with various combinations of extensions (Curriculum Learning, Variable Length, and Teacher Helping). Our best model combines all of the extensions and outperforms the baseline by a wide margin on all metrics.

Finally, to check the ability of our models to generalize to longer sequences, we generated sequences of length 64 with our CL+VL+TH model, which was trained on sequences of up to 32 characters (Table 3). We then evaluated the generated text, and this evaluation shows that there is a small degradation in performance (Table 2).

We show for the first time an RNN trained with a GAN objective that learns to generate natural language from scratch. Moreover, we demonstrate that our model generalizes to sequences longer than the ones seen during training. In future work, we plan to apply these models to tasks such as image captioning and translation, comparing them to models trained with maximum likelihood.