Deep Learning (DL) models are becoming larger, because the increase in model size might offer significant accuracy gain. To enable the training of large deep networks, data parallelism and model parallelism are two well-known approaches for parallel training. However, data parallelism does not help reduce memory footprint per device. In this work, we introduce Large deep 3D ConvNets with Automated Model Parallelism (LAMP) and investigate the impact of both input's and deep 3D ConvNets' size on segmentation accuracy. Through automated model parallelism, it is feasible to train large deep 3D ConvNets with a large input patch, even the whole image. Extensive experiments demonstrate that, facilitated by the automated model parallelism, the segmentation accuracy can be improved through increasing model size and input context size, and large input yields significant inference speedup compared with sliding window of small patches in the inference. Code is available[https://monai.io/research/lamp-automated-model-parallelism]. 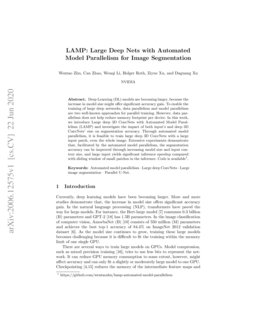 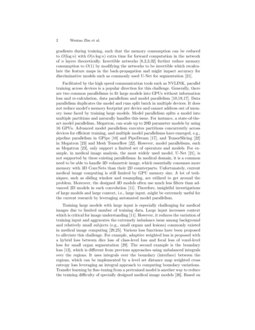 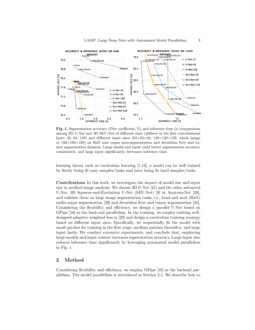 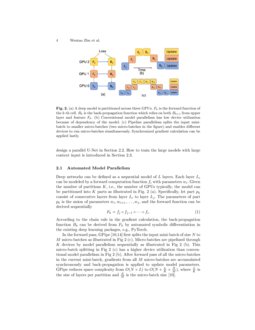 We report on an experimental investigation into opportunities for parall...
Bruce D'Ambrosio, et al. ∙

The size of Transformer models is growing at an unprecedented pace. It h...
Chaoyang He, et al. ∙

Currently, deep learning models have been becoming larger. More and more studies demonstrate that, the increase in model size offers significant accuracy gain. In the natural language processing (NLP), transformers have paved the way for large models. For instance, the Bert-large model

consumes 0.3 billion (B) parameters and GPT-2

has 1.5B parameters. In the image classification of computer vision, AmoebaNet (B)

consists of 550 million (M) parameters and achieves the best top-1 accuracy of 84.4% on ImageNet 2012 validation dataset

[6]. As the model size continues to grow, training these large models becomes challenging because it is difficult to fit the training within the memory limit of one single GPU.

There are several ways to train large models on GPUs. Model compression, such as mixed precision training [16], tries to use less bits to represent the network. It can reduce GPU memory consumption to some extent, however, might affect accuracy and can only fit a slightly or moderately large model to one GPU. Checkpointing [4, 15] reduces the memory of the intermediate feature maps and gradients during training, such that the memory consumption can be reduced to O(logn) with O(nlogn) extra time for forward computation in the network of n layers theoretically. Invertible networks [8, 2, 3, 32] further reduce memory consumption to O(1) by modifying the networks to be invertible which recalculate the feature maps in the back-propagation and might impact accuracy for discriminative models such as commonly used U-Net for segmentation [21].

[22]. However, model parallelisms, such as Megatron [23], only support a limited set of operators and models. For example, in medical image analysis, the most widely used model, U-Net [21], is not supported by these existing parallelisms. In medical domain, it is a common need to be able to handle 3D volumetric image, which essentially consumes more memory with 3D ConvNets than their 2D counterparts. Unfortunately, current medical image computing is still limited by GPU memory size. A lot of techniques, such as sliding window and resampling, are utilized to get around the problem. Moreover, the designed 3D models often use much less filters than advanced 2D models in each convolution [11]. Therefore, insightful investigations of large models and large context, i.e., large input, might be extremely useful for the current research by leveraging automated model parallelism.

Training large models with large input is especially challenging for medical images due to limited number of training data. Large input increases context which is critical for image understanding [11]. However, it reduces the variation of training input and aggravates the extremely imbalance issue among background and relatively small subjects (e.g., small organs and lesions) commonly existed in medical image computing [29, 25]

. Various loss functions have been proposed to alleviate this challenge. For example, adaptive weighted loss is proposed with a hybrid loss between dice loss of class-level loss and focal loss of voxel-level loss for small organ segmentation

, which is different from previous approaches using unbalanced integrals over the regions. It uses integrals over the boundary (interface) between the regions, which can be implemented by a level set distance map weighted cross entropy loss leveraging an integral approach to computing boundary variations. Transfer learning by fine-tuning from a pretrained model is another way to reduce the training difficulty of specially designed medical image models

[26]. Based on learning theory such as curriculum learning [1, 12], a model can be well trained by firstly being fit easy samples/tasks and later being fit hard samples/tasks.

In this work, we investigate the impact of model size and input size in medical image analysis. We choose 3D U-Net [21] and the other advanced U-Net, 3D Squeeze-and-Excitation U-Net (SEU-Net) [9] in AnatomyNet [29], and validate them on large image segmentation tasks, i.e., head and neck (HaN) multi-organ segmentation [29] and decathlon liver and tumor segmentation [24]. Considering the flexibility and efficiency, we design a parallel U-Net based on GPipe [10] as the back-end parallelism. In the training, we employ existing well-designed adaptive weighted loss in [29] and design a curriculum training strategy based on different input sizes. Specifically, we sequentially fit the model with small patches for training in the first stage, medium patches thereafter, and large input lastly. We conduct extensive experiments, and conclude that, employing large models and input context increases segmentation accuracy. Large input also reduces inference time significantly by leveraging automated model parallelism in Fig. 1.

Deep networks can be defined as a sequential model of L layers. Each layer Li can be modeled by a forward computation function fi with parameters wi. Given the number of partitions K, i.e., the number of GPUs typically, the model can be partitioned into K parts as illustrated in Fig. 2 (a). Specifically, let part pk consist of consecutive layers from layer Li to layer Lj. The parameters of part pk is the union of parameters wi,wi+1,…,wj, and the forward function can be derived sequentially

According to the chain rule in the gradient calculation, the back-propagation function

Bk can be derived from Fk

We employ the conventional U-Net [21], which can be divided into three parts: an encoder E with five blocks e1,e2,…,e5 from input sequentially, a decoder D with four blocks d5,d4,…,d1, and four skip connections s1,s2,…,s4. The U-Net can be formulated

where si is typically a concatenation along channel dimension. The input of encoder E is the image, and the input of decoder block d5 is the output of encoder. We can then add a softmax function after decoder D for segmentation.

The main challenge of pipeline-based parallel U-Net is the dependency of intermediate encoder in the skip connection si. GPipe requires that the model needs to be implemented in a sequential way. However, each ei,i=1,2,…,4, is used in both encoder and decoder, which affects automated partition in GPipe. We can remove the dependency and modify U-Net by duplicating the output of each encoder ei={ei,0,ei,1},i=1,2,…,4. Specifically, the sequential U-Net can be derived

The temporary variable ei,1 breaks the dependency in the skip connection and facilitates the automated partition in automated parallelism of GPipe. We can employ the existing GPipe algorithm to implement parallel U-Net based on the designed sequential U-Net.

Leveraging the powerful tool of parallel U-Net, we investigate the impact of model size and input context size. Although previous study demonstrates large input size increases segmentation accuracy because of large context [11], it also decreases the variation of training input and aggravates the extremely imbalance issue between background and the small subjects. From model size’s perspective, large model consists of more parameters which typically require more various data to fit. Therefore, designing a learning strategy is essential to fully exploit the power of large input with more context information.

Inspired by the learning theory, i.e. curriculum learning [1], we can fit easy data/task into the network first and let the network to solve hard task later. Learning from smaller patches is easier, because smaller patches can be sampled with less imbalance and the lower dimension of smaller patches consists of less structures to learn for structured tasks, e.g., image segmentation. In practice, we firstly sample small positive patches (size of 64×64×64) to train the model in the initial stage. In the second stage, we sample medium positive patches (size of 128×128×128) to train the model. Finally, we use the largest patch to train the model. In this way, we can fully train models with large input patches in a practical way.

The other dataset is 3D liver and tumor segmentation CT dataset from the medical segmentation decathlon [24]. We randomly split the dataset into 104 training images and 27 test images. We re-sample the CT images to 1×1×1 mm3 spacing. To focus on the liver region, we clip the voxel value within range [−21,89]

and linearly transform each 3D image into range

. In the training, we randomly flip and rotation 90 degrees in XY space with probability 0.1. We further add uniform random noise

In the training, for the largest input, we use batch size of one and RMSProp optimizer

with 300 epochs and learning rate of 1

We employ two networks, 3D U-Net and 3D SEU-Net, to investigate the impact of model size and input context size in table 1 and 2 on HaN dataset. With the increase of model size and input size, the segmentation accuracy increases consistently for both U-Net and SEU-Net. The SEU-Net-128 with whole image as input achieves better performance than AnatomyNet searching different network structures [29]. The reason for the accuracy improvement is that large input and model yield big context and learning capacity, respectively. We investigate the impact of large input on inference time by averaging three rounds of inferences in table 3. Using large input in the inference reduces the inference time significantly because it reduces the number of inference rounds. Results on liver and tumor segmentation task validate large input increases segmentation accuracy and reduces the inference time in table 4 and 5.

In this work, we try to investigate the impact of model size and input context size on two medical image segmentation tasks. To run large models and large input in the GPUs, we design a parallel U-Net with sequential modification based on an automated parallelism. Extensive results demonstrate that, 1) large model and input increases segmentation accuracy, 2) large input reduces inference time significantly. The Large deep networks with Automated Model Parallelism (LAMP) can be a useful tool for many medical image analysis tasks such as large image registration [30, 31], detection and neural architecture search.

Appendix 0.A Appendix: Design of LAMP

The figure 3 shows we reduce the dependency of long range skip-connection (Up) by separating it to two blocks (Bottom). Through the design of LAMP, the parallel U-Net achieves more parallel blocks, which lead to high throughput. We proof this in the next section.

Appendix 0.B Appendix: Proof for High Throughput of LAMP

We demonstrate the parallel U-Net with LAMP has higher throughput in Fig. 4 and Fig. 5.