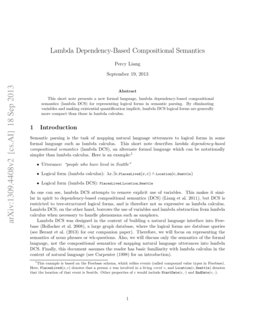 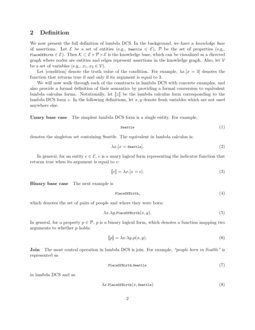 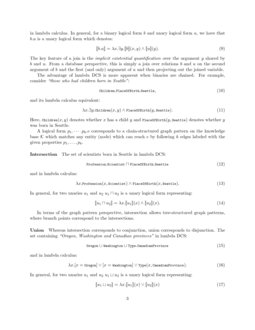 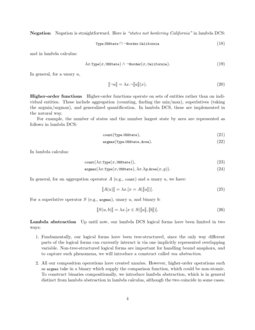 A CCG-based Compositional Semantics and Inference System for Comparatives

Logical Semantics and Commonsense Knowledge: Where Did we Go Wrong, and How to Go Forward, Again

We argue that logical semantics might have faltered due to its failure i...
Walid S. Saba, et al. ∙

This article contains ideas and their elaboration for quantifiers, which...
Alex Shkotin, et al. ∙

A Logical Semantics for PDDL+

Many language technology applications would benefit from the ability to ...
Federico Fancellu, et al. ∙

As one can see, lambda DCS attempts to remove explicit use of variables. This makes it similar in spirit to dependency-based compositional semantics (DCS) (Liang et al. 2011), but DCS is restricted to tree-structured logical forms, and is therefore not as expressive as lambda calculus. Lambda DCS, on the other hand, borrows the use of variables and lambda abstraction from lambda calculus when necessary to handle phenomena such as anaphora.

is the knowledge base, which can be visualized as a directed graph where nodes are entities and edges represent assertions in the knowledge graph. Also, let

Let [condition] denote the truth value of the condition. For example, λx.[x=3] denotes the function that returns true if and only if its argument is equal to 3.

We will now walk through each of the constructs in lambda DCS with concrete examples, and also provide a formal definition of their semantics by providing a formal conversion to equivalent lambda calculus forms. Notationally, let ⟦z⟧ be the lambda calculus form corresponding to the lambda DCS form z. In the following definitions, let x,y denote fresh variables which are not used anywhere else.

The simplest lambda DCS form is a single entity. For example,

denotes the singleton set containing Seattle. The equivalent in lambda calculus is:

In general, for an entity e∈E, e is a unary logical form representing the indicator function that returns true when its argument is equal to e:

The next example is

which denotes the set of pairs of people and where they were born:

In general, for a property p∈P, p is a binary logical form, which denotes a function mapping two arguments to whether p holds:

The most central operation in lambda DCS is join. For example, “people born in Seattle” is represented as

in lambda DCS and as

The key feature of a join is the implicit existential quantification over the argument y shared by b and u. From a database perspective, this is simply a join over relations b and u on the second argument of b and the first (and only) argument of u and then projecting out the joined variable.

The advantage of lambda DCS is more apparent when binaries are chained. For example, consider “those who had children born in Seattle”:

and its lambda calculus equivalent:

A logical form p1.⋯.pk.e corresponds to a chain-structured graph pattern on the knowledge base K which matches any entity (node) which can reach e by following k edges labeled with the given properties p1,…,pk.

The set of scientists born in Seattle in lambda DCS:

In general, for two unaries u1 and u2 u1⊓u2 is a unary logical form representing:

In general, for two unaries u1 and u2 u1⊔u2 is a unary logical form representing:

Negation is straightforward. Here is “states not bordering California” in lambda DCS:

In general, for a unary u,

Higher-order functions operate on sets of entities rather than on individual entities. These include aggregation (counting, finding the min/max), superlatives (taking the argmin/argmax), and generalized quantification. In lambda DCS, these are implemented in the natural way.

For example, the number of states and the number largest state by area are represented as follows in lambda DCS:

In general, for an aggregation operator A (e.g., count) and a unary u, we have:

For a superlative operator S (e.g., argmax), unary u, and binary b:

Up until now, our lambda DCS logical forms have been limited in two ways:

Let us start with an example of bound anaphora: “those who had a child who influenced them”. In lambda DCS, we use mu abstraction:

Here, the μx simply adds a constraint that the first argument of Children be bound to the second argument of Influenced. In lambda calculus, this expression is:

Let us consider a superlative with a compositional comparison function: “person who has the most children”. In lambda DCS, we use lambda abstraction to construct a new binary logical form denoting pairs of people and the number of children they have:

where we use the reverse operator ⟦R[b]⟧=λy.λx.⟦b⟧(x,y) switches the arguments of b.

In general, for a variable a∈V and a unary u, we define the conversion for variables, mu abstraction, and lambda abstraction as follows:

A prevailing theme in lambda DCS is that the construction of logical forms centers around sets (of entities or entity pairs), whereas in lambda calculus, construction centers around truth values. Lifting up to sets allows us to eliminate variables, treating them as implicitly existentially quantified. Indeed, looking back to the conversion function ⟦⋅⟧, they all have the form ⟦z⟧=λx.something. Of course, there are logical forms where lambda DCS would not offer much savings in reducing variables—for example, when many predicates operate on the same variables in a non-tree-structured manner. However, we have found that for logical forms derived from natural language, especially for querying databases, lambda DCS is a good choice.

The development of lambda DCS has been inspired by many other formalisms. As evident by name, lambda DCS is adapted from Dependency-Based Compositional Semantics (DCS) (Liang et al. 2011), which prominently features (i) tree-structured logical forms and (ii) default existential quantification, the latter being imported from Discourse Representation Theory (Kamp and Reyle 1993). There are two major differences between lambda DCS and DCS. First, lambda DCS revolves around unaries and binaries, which we found to be the right level of generality; DCS allowed arbitrary arities, and thus was a little too low-level. Second, we have omitted the mark-execute construct of DCS, which is an orthogonal direction for future exploration. We can think of mark-execute as more in the realm of constructing logical forms compositionally rather than their representation. We have focused on the latter here.

The syntax of lambda DCS and the tree-structured nature (without variables) is derived from the concept constructors in description logic (Baader 2003), but the marriage with variables and higher-order functions is specific to lambda DCS. Of course, description logic is designed for logical inference, which necessitates a simpler logic, whereas lambda DCS is designed for model checking (e.g., querying a database), and can therefore bear the additional complexity.

Given our application to querying graph databases, it is natural that there are some parallels between lambda DCS and graph query languages such as SPARQL (Harris and Seaborne 2011), to which we ultimately convert in order to execute the logical forms (Berant et al. 2013). Working with a graph database leads to thinking about logical forms as graph patterns, although this intuition is less helpful when we add higher-order operations.

In terms of expressivity, lambda DCS is clearly dominated by lambda calculus, as evident by our conversion from the former to the latter. From this perspective, lambda DCS is syntactic sugar. However, we believe that lambda DCS is more closely connected with the compositional structure of natural language and therefore can be quite convenient to work with.

We should also note that lambda calculus in formal semantics is really used for two purposes, which we’d like to dissect: The first purpose is to construct the logical form of a sentence compositionally, where lambda abstraction is merely used as a macro to piece bits of logical form together. The second purpose is to represent the final logical form, where lambda abstraction is needed to denote a function (e.g., the comparison function passed into argmax). Here, we have mainly focused on the latter representation issues. As for construction, we have so far used a very simple construction mechanism Berant et al. (2013), since we targeted the semantic parsing of short questions, which have limited compositional demands. In principle, lambda DCS logical forms could be constructed using lambda calculus (serving as a macro) in a CCG formalism. Analogously, lambda calculus has been used to build logical forms in Discourse Representation Theory (Muskens 1996). Down the road, we hope that working with lambda DCS can lead to new construction mechanisms suitable for complex sentences.