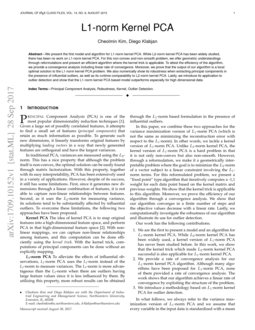 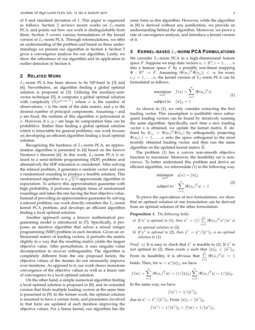 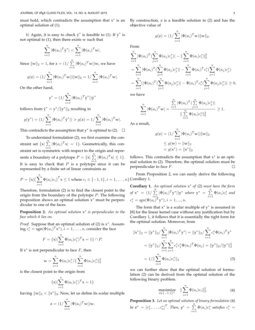 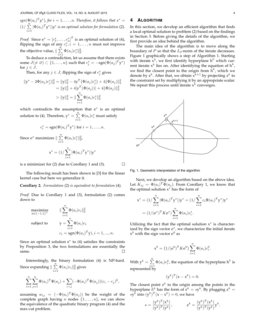 Principal Component Analysis (PCA) is one of the most popular dimensionality reduction techniques [1]. Given a large set of possibly correlated features, it attempts to find a small set of features (principal components

) that retain as much information as possible. To generate such new dimensions, it linearly transforms original features by multiplying

in a way that newly generated features are orthogonal and have the largest variances.

In traditional PCA, variances are measured using the L2-norm. This has a nice property that although the problem itself is non-convex, the optimal solution can be easily found through matrix factorization. With this property, together with its easy interpretability, PCA has been extensively used in a variety of applications. However, despite of its success, it still has some limitations. First, since it generates new dimensions through a linear combination of features, it is not able to capture non-linear relationships between features. Second, as it uses the L2-norm for measuring variance, its solutions tend to be substantially affected by influential outliers. To overcome these limitations, the following two approaches have been proposed.

Kernel PCA The idea of kernel PCA is to map original features into a high-dimensional feature space, and perform PCA in that high-dimensional feature space [2]. With non-linear mappings, we can capture non-linear relationships among features, and this computation can be done efficiently using the kernel trick. With the kernel trick, computations of principal components can be done without an explicitly mapping.

L1-norm PCA To alleviate the effects of influential observations, L1-norm PCA uses the L1-norm instead of the L2-norm to measure variances. The L1-norm is more advantageous than the L2-norm when there are outliers having large feature values since it is less influenced by them. By utilizing this property, more robust results can be obtained through the L1-norm based formulation in the presence of influential outliers.

In this paper, we combine these two approaches for the variance maximization version of L1-norm PCA (which is not the same as minimizing the reconstruction error with respect to the L1-norm). In other words, we tackle a kernel version of L1-norm PCA. Unlike L2-norm kernel PCA, the kernel version of L1-norm PCA is a hard problem in that it is not only non-convex but also non-smooth. However, through a reformulation, we make it a geometrically interpretable problem where the goal is to minimize the L2-norm of a vector subject to a linear constraint involving the L1-norm terms. For this reformulated problem, we present a ”fixed point” type algorithm that iteratively computes a -1,1 weight for each data point based on the kernel matrix and previous weights. We show that the kernel trick is applicable to this algorithm. Moreover, we prove the efficiency of our algorithm through a convergence analysis. We show that our algorithm converges in a finite number of steps and the objective values decrease with a linear rate. Lastly, we computationally investigate the robustness of our algorithm and illustrate its use for outlier detection.

Our work has the following contributions.

In what follows, we always refer to the variance maximization version of L1

-norm PCA and we assume that every variable in the input data is standardized with a mean of 0 and standard deviation of 1. This paper is organized as follows. Section

2 reviews recent works on L1-norm PCA, and points out how our work is distinguishable from them. Section 3 covers various formulations of the kernel version of L1-norm PCA. Through reformulations, we offer an understanding of the problem and based on these understandings we present our algorithm in Section 4. Section 5 gives a convergence analysis for our algorithm. Lastly, we show the robustness of our algorithm and its application to outlier detection in Section 6.

Recognizing the hardness of L1-norm PCA, an approximation algorithm is presented in [4] based on the known Nesterov’s theorem [6]. In this work, L1-norm PCA is relaxed to a semi-definite programming (SDP) problem and alternatively the SDP relaxation is considered. After solving the relaxed problem, it generates a random vector and uses a randomized rounding to produce a feasible solution. This randomized algorithm is a √2/π

. Specifically, it proposes an iterative algorithm that solves a mixed integer programming (MIP) problem in each iteration. Given an orthonormal matrix of loading vectors, it perturbs the matrix slightly in a way that the resulting matrix yields the largest objective value. After perturbation, it uses singular value decomposition to recover orthogonality. The algorithm is completely different from the one proposed herein, the objective values of the iterates do not necessarily improve over iterations. As opposed to it, our work shows monotone convergence of the objective values as well as a linear rate of convergence to a local optimal solution.

On the other hand, a simple numerical algorithm finding a local optimal solution is proposed in [8], and its extended version that finds multiple loading vectors at the same time is presented in [9]. In the former work, the optimal solution is assumed to have a certain form, and parameters involved in that form are updated at each iteration improving the objective values. For a linear kernel, our algorithm has the same form as this algorithm. However, while the algorithm in [8] is derived without any justification, we provide an understanding behind the algorithm. Moreover, we prove a rate of convergence analysis, and introduce a kernel version of it.

We consider L1-norm PCA in a high-dimensional feature space F. Suppose we map data vectors ai∈Rd, i=1,…,n into a feature space F by a possibly non-linear mapping Φ:Rd→F. Assuming |Φ(ai)TΦ(aj)|<∞ for every i,j=1,…,n, the kernel version of L1-norm PCA can be formulated as follows.

The problem (1) has a convex non-smooth objective function to maximize. Moreover, the feasibility set is non-convex. To better understand this problem and derive an efficient algorithm, we reformulate (1) in the following way.

In the same way, we have

must hold, which contradicts the assumption that x∗ is an optimal solution of (1).

follows from ^y∗=y∗/∥y∗∥2 resulting in

This contradicts the assumption that y∗ is optimal to (2). ∎

Therefore, formulation (2) is to find the closest point to the origin from the boundary of the polytope P. The following proposition shows an optimal solution x∗ must be perpendicular to one of the faces.

An optimal solution x∗ is perpendicular to the face which it lies on.

Suppose that an optimal solution of (2) is x∗. Assuming c∗i=sgn(Φ(ai)Tx∗),i=1,…,n, consider the face

If x∗ is not perpendicular to face F, then

is the closest point to the origin from

having ∥w∥2<∥x∗∥2. Now, let us define its scalar multiple

By construction, z is a feasible solution to (2) and has the objective value of

From Proposition 2, we can easily derive the following Corollary 1.

The form that x∗ is a scalar multiple of y∗ is assumed in [8] for the linear kernel case without any justification but by Corollary 1, it follows that it is essentially the right form for the optimal solution. Moreover, from

To deduce a contradiction, let us assume that there exists some J(≠∅)⊂{1,…,n} such that c∗j=−sgn(Φ(aj)Ty∗) for j∈J.

Then, for any j∈J, flipping the sign of c∗j gives

which contradicts the assumption that c∗ is an optimal solution to (4). Therefore, y∗=n∑i=1Φ(ai)c∗i must satisfy

The following result has been shown in [3] for the linear kernel case but here we generalize it.

Since an optimal solution c∗ to (4) satisfies the constraints by Proposition 3, the two formulations are essentially the same. ∎

Interestingly, the binary formulation (4) is NP-hard. Since expanding ∥n∑i=1Φ(ai)ci∥22 gives

assuming wij=(−Φ(ai)TΦ(aj)) be the weight of the complete graph having n nodes {1,…,n}, we can show the equivalence of the quadratic binary program (4) and the max-cut problem.

In this section, we develop an efficient algorithm that finds a local optimal solution to problem (2) based on the findings in Section 3. Before giving the details of the algorithm, we first provide an idea behind the algorithm.

The main idea of the algorithm is to move along the boundary of P so that the L2-norm of the iterate decreases. Figure 1 graphically shows a step of Algorithm 1. Starting with iterate xk

hk which current iterate xk lies on. After identifying the equation of hk, we find the closest point to the origin from hk, which we denote by zk. After that, we obtain xk+1 by projecting zk to the constraint set by multiplying it by an appropriate scalar. We repeat this process until iterate xk converges.

Next, we develop an algorithm based on the above idea. Let Kij=Φ(ai)TΦ(aj). From Corollary 1, we know that the optimal solution x∗ has the form of

With yk=n∑i=1Φ(ai)cki, the equation of the hyperplane hk is represented by

The closest point zk to the origin among the points in the hyperplane hk has the form of zk=syk. By plugging zk=syk into (yk)T(x−xk)=0, we have

we get the followings.

This implies that we only need to update ck at each iteration. From

we only require to compute

at each iteration. From

we get the following termination criteria:

After getting the final c∗ from Algorithm 1, we can compute principal scores without explicit mapping Φ(ai). For example, the principal component of ith observation can be computed by

Before proving the convergence of the algorithm, we first show that the sequence {∥xk∥2} is non-increasing.

The sequence {xk} converges in a finite number of steps.

Without loss of generality, let xl=xl+m. By Lemma 1, we have

forcing us to have ∥xl∥2=∥xl+1∥2=...=∥xl+m∥2. Now, by Lemma 2, xl=xl+1=...=xl+m must hold, which contradicts the assumption that the sequence {xk} does not converge. In other words, the algorithm stops at iteration l+1. Therefore, the sequence {xk} generated by Algorithm 1 converges in a finite number of steps. ∎

Next, we prove that the sequence {xk} generated by Algorithm 1 converges with a linear rate.

Let Algorithm 1 start from x0 and terminate with x∗ at iteration k∗+1. Then we have ∥xk∥2−∥x∗∥2≤ρk(∥x0∥2−∥x∗∥2) where ρ<1 for all k<k∗.