In this work, we study the λ-regularized A-optimal design problem and introduce the λ-regularized proportional volume sampling algorithm, generalized from [Nikolov, Singh, and Tantipongpipat, 2019], for this problem with the approximation guarantee that extends upon the previous work. In this problem, we are given vectors v_1,…,v_n∈ℝ^d in d dimensions, a budget k≤ n, and the regularizer parameter λ≥0, and the goal is to find a subset S⊆ [n] of size k that minimizes the trace of (∑_i∈ Sv_iv_i^⊤ + λ I_d)^-1 where I_d is the d× d identity matrix. The problem is motivated from optimal design in ridge regression, where one tries to minimize the expected squared error of the ridge regression predictor from the true coefficient in the underlying linear model. We introduce λ-regularized proportional volume sampling and give its polynomial-time implementation to solve this problem. We show its (1+ϵ/√(1+λ'))-approximation for k=Ω(d/ϵ+log 1/ϵ/ϵ^2) where λ' is proportional to λ, extending the previous bound in [Nikolov, Singh, and Tantipongpipat, 2019] to the case λ>0 and obtaining asymptotic optimality as λ→∞. 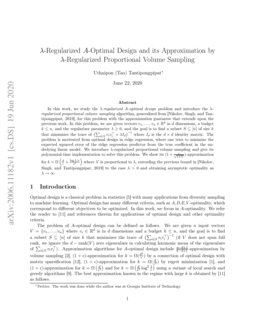 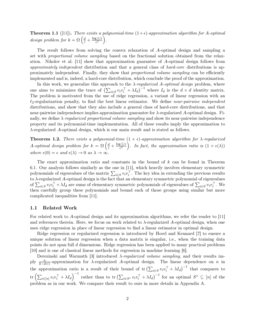 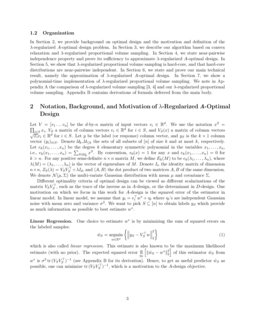 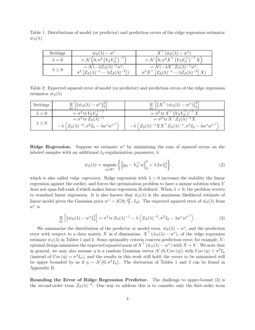 Optimal design is a classical problem in statistics [5]

with many applications from diversity sampling to machine learning. Optimal design has many different criteria, such as

A,D,E,V-optimality, which correspond to different objectives to be optimized. In this work, we focus in A-optimality. We refer the reader to [11] and references therein for applications of optimal design and other optimality criteria.

The problem of A-optimal design can be defined as follows. We are given n input vectors V={v1,…,vn} where vi∈Rd is in d dimensions and a budget k≤n, and the goal is to find a subset S⊆[n] of size k that minimizes the trace of (∑i∈Sviv⊤i)−1 (if V does not span full rank, we ignore the d−\rm rank(V)

The result follows from solving the convex relaxation of A-optimal design and sampling a set with proportional volume sampling based on the fractional solution obtained from the relaxation. Nikolov et al. [11] show that approximation guarantee of A-optimal design follows from approximately independent distribution and that a general class of hard-core distributions is approximately independent. Finally, they show that proportional volume sampling can be efficiently implemented and is, indeed, a hard-core distribution, which conclude the proof of the approximation.

In this work, we generalize this approach to the λ-regularized A-optimal design problem, where one aims to minimizes the trace of (∑i∈Sviv⊤i+λId)−1 where Id is the d×d

identity matrix. The problem is motivated from the use of ridge regression, a variant of linear regression with an

-regularization penalty, to find the best linear estimator. We define

For related work to A-optimal design and its approximation algorithms, we refer the reader to [11] and references therein. Here, we focus on work related to λ-regularized A-optimal design, when one uses ridge regression in place of linear regression to find a linear estimator in optimal design.

Ridge regression or regularized regression is introduced by Hoerl and Kennard [7] to ensure a unique solution of linear regression when a data matrix is singular, i.e., when the training data points do not span full d dimensions. Ridge regression has been applied to many practical problems [10] and is one of classical linear methods for regression in machine learning [6].

Let V=[v1…vn] be the d-by-n matrix of input vectors vi∈Rd. We use the notation xS=∏i∈Sxi, VS a matrix of column vectors vi∈Rd for i∈S, and VS(x) a matrix of column vectors √xivi∈Rd for i∈S. Let y be the label (or response) column vector, and yS is the k×1 column vector (yi)i∈S. Denote \altmathcalUk,\altmathcalU≤k the sets of all subsets of [n] of size k and at most k, respectively. Let ek(x1,…,xn) be the degree k elementary symmetric polynomial in the variables x1,…,xn, i.e., ek(x1,…,xn)=∑S∈\altmathcalUkxS. By convention, e0(x)=1 for any x and ek(x1,…,xn)=0 for k>n. For any positive semi-definite n×n matrix M, we define Ek(M) to be ek(λ1,…,λn), where λ(M)=(λ1,…,λn) is the vector of eigenvalues of M. Denote In the identity matrix of dimension n×n, ZS(λ)=VSV⊤S+λId, and ⟨A,B⟩ the dot product of two matrices A,B of the same dimension. We denote N(μ,Σ)

the multi-variate Gaussian distribution with mean

Different optimality criteria of optimal design can be viewed as different scalarizations of the matrix VSV⊤S, such as the trace of the inverse as in A-design, or the determinant in D-design. One motivation on which we focus in this work for A-design is the squared error of the estimator in linear model. In linear model, we assume that yi=v⊤iw∗+ηi where ηi

’s are independent Gaussian noise with mean zero and variance

σ2. We want to pick S⊆[n] to obtain labels yS which provide as much information as possible to best estimate w∗.

One choice to estimate w∗ is by minimizing the sum of squared errors on the labeled samples:

which is also called linear regression. This estimate is also known to be the maximum likelihood estimate (with no prior). The expected squared error of this estimator ^wS from w∗ is σ2tr(VSV⊤S)−1 (see Appendix B for its derivation). Hence, to get as useful predictor ^wS as possible, one can minimize tr(VSV⊤S)−1, which is a motivation to the A-design objective.

Suppose we estimate w∗ by minimizing the sum of squared errors on the labeled samples with an additional ℓ2-regularization parameter λ:

increases the stability the linear regression against the outlier, and forces the optimization problem to have a unique solution when

V does not span full-rank d which makes linear regression ill-defined. When λ=0, the problem reverts to standard linear regression. It is also known that ^wS(λ) is the maximum likelihood estimate of linear model given the Gaussian prior w∗∼N(0,σ2λ⋅Id). The expected squared error of ^wS(λ) from w∗ is

We summarize the distribution of the predictor or model error, ^wS(λ)−w∗, and the prediction error with respect to a data matrix X in d dimensions, X⊤(^wS(λ)−w∗), of the ridge regression estimate ^wS(λ) in Tables 1 and 2. Some optimality criteria concern prediction error; for example, V-optimal design minimizes the expected squared norm of X⊤(^wS(λ)−w∗) with X=V. We note that in general, we may also assume η is a random Gaussian vector N(0,Cov(η)) with Cov(η)⪯σ2In (instead of Cov(η)=σ2In), and the results in this work still hold; the errors to be minimized will be upper bounded by as if η∼N(0,σ2In). The derivation of Tables 1 and 2 can be found in Appendix B.

The challenge to upper-bound (3) is the second-order term ZS(λ)−2. One way to address this is to consider only the first-order term tr(ZS(λ)−1). For example, Derezinski and Warmuth [3] assume that λ≤σ2∥w∗∥22, which gives λw∗w∗⊤⪯σ2I, and then we have

The right-hand side of (4) now contains only the first-order term tr(ZS(λ)−1), which can be easier to optimize. For example, results in [3, 4] imply an approximation for the objective tr(ZS(λ)−1). To the best of our knowledge, it is an open question whether there is an approximation algorithm that directly bounds EηS[∥^wS(λ)−w∗∥22] without any assumption on λ.

The upper-bound σ2tr(ZS(λ)−1) of the expected squared predictor error in (4) is similar to the A-optimal design objective tr(VSV⊤S)−1 , and we follow Derezinski and Warmuth [3] in using it as an objective to be optimized. In particular, we define the λ-regularized A-optimal design problem as, given input vectors V=[v1…vn]∈Rd×n in d dimensions, positive integer k, and λ≥0, we find a subset S⊆[n] of size k to minimize

Hence, one can also define λ-regularized generalized ratio objective as

To solve λ-regularized A-optimal design, we solve the convex relaxation of the optimization problem, namely

where V(x):=[√x1v1…√xnvn], to get a fractional solution x∈Rn. Note that convexity follows from the convexity of function Ed−1(M)Ed(M) over the set of all PSD matrices M∈Rn×n. Then, we sample a set S by λ-regularized proportional volume sampling with hard-core measure μ, where the parameter z∈Rn of the measure μ depends on the fractional solution x. The summary of the algorithm is in Algorithm 1. We choose z in such a way to obtained the desired approximation result. The approximation and motivation to how we set z can be found in Section 6.

Let μ be a distribution on \altmathcalU∈{\altmathcalUk,\altmathcalU≤k}. Let x∈Rn+. We say μ is (c,α)-near-pairwise independent with respect to x if for all T,R⊆[n] each of size at most d,

We omit the phrase "with respect to x" when the context is clear. Before we prove the main result, we make some calculation which will be used later.

Let λ1,…,λd be eigenvalues of X. Then we have

which proves the first equality. Next, we have

by counting the number of each monomial in ei(λ). Noting that ei(λ)=Ei(X), we finish the proof. ∎

Now we are ready to state and prove the main result in this section.

Let x∈[0,1]n. Let μ be a distribution on \altmathcalU∈{\altmathcalUk,\altmathcalU≤k} that is (c,α)-near-pairwise independent. Then the λ-regularized proportional volume sampling μ′ with measure μ satisfies

where we apply Cauchy-Binet to the last equality. Next, we apply Lemma 4.2 to LHS of (15) to get

Therefore, by cross-multiplying the numerator and denominator, the ratio E\altmathcalS∼μ′[Ed−1(ZS(λ))Ed(ZS(λ))]Ed−1(V(x)V(x)⊤+αλI)Ed(V(x)V(x)⊤+αλI) equals to

For each fixed h,T,ℓ,R, we want to upper bound λd−1−h(αλ)d−ℓxRPrμ[\altmathcalS⊇T]λd−ℓ(αλ)d−1−hxTPrμ[\altmathcalS⊇R]. By the definition of near-pairwise independence (11),

In this section, we want to construct a distribution μ on \altmathcalU≤k and prove its (c,α)-near-pairwise-independence. Our proposed μ is hard-core with parameter z∈Rn defined by zi:=xiβ−xi (coordinate-wise) for some β∈(1,2] to be chosen later. With this choice of μ, we upper bound the ratio Pr\altmathcalS∼μ[\altmathcalS⊇T]Pr\altmathcalS∼μ[\altmathcalS⊇R] in terms of β. Later in Section 6, after getting an explicit approximation ratio in terms of β, we will optimize for β to get the desired approximation result to Algorithm 1.

Let x(R)=∑i∈Rxi. Then by Chernoff bound,

6 The Proof of the Main Result

The main aim of this section is prove the approximation guarantee of the λ-regularized proportional volume sampling algorithm (Algorithm 1) for λ-regularized A-optimal design. The main result is stated formally in Theorem 6.1.

The approximation guarantee of Algorithm 1 follows from (21) because x in Algorithm 1 is a convex solution to λ-regularized A-optimal design, so the objective achieved by x is at most the optimal value of the original problem.

We briefly outline the proof of Theorem 6.1 here, which combines results from previous sections. Lemma 5.1 shows that our constructed μ is (c,β)-near-pairwise independent for some c dependent on β. Theorem 4.3 converts (c,β)-near-pairwise independence to the (cβ)-approximation guarantee to βλ-regularized A-optimal design. However, this may be a gap between the optimums of βλ- and λ-regularized A-optimal design. As β increases, the gap is larger so that the approximation tightens even more (we quantify this gap formally in Claim 2). As a result, we want to pick β small enough to have a small (cβ)-approximation ratio but also big enough to exploit this gap. Choosing β that gives our desired approximation is done in the proof of Theorem 6.1.

Before proving the main theorem, Theorem 6.1, we first simplify the parameter c of (c,β)-near-pairwise independent μ that we constructed. The claim below shows that k=Ω(dϵ+log(1/ϵ)ϵ2) is a right condition to obtain c≤1+ϵ.

which, by solving the quadratic equation in √k, is further equivalent to