In this paper we consider the use of the space vs. time Kronecker product decomposition in the estimation of covariance matrices for spatio-temporal data. This decomposition imposes lower dimensional structure on the estimated covariance matrix, thus reducing the number of samples required for estimation. To allow a smooth tradeoff between the reduction in the number of parameters (to reduce estimation variance) and the accuracy of the covariance approximation (affecting estimation bias), we introduce a diagonally loaded modification of the sum of kronecker products representation [1]. We derive a Cramer-Rao bound (CRB) on the minimum attainable mean squared predictor coefficient estimation error for unbiased estimators of Kronecker structured covariance matrices. We illustrate the accuracy of the diagonally loaded Kronecker sum decomposition by applying it to video data of human activity. 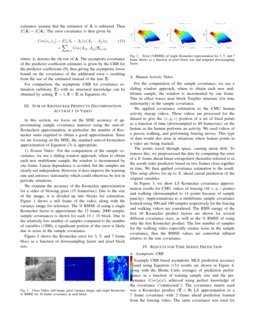 We consider covariance matrix estimation in a setting, where there are m...
Elias Raninen, et al. ∙

In this work we consider the problem of detecting anomalous spatio-tempo...
Kristjan Greenewald, et al. ∙

Efficiently updating a covariance matrix and its LDL decomposition

Space-Time Extension of the MEM Approach for Electromagnetic Neuroimaging

In this paper, we consider the policy evaluation problem in multi-agent ...
Xingang Guo, et al. ∙

where In denotes the N pixels or other features of interest in the nth video frame. We make the standard piecewise stationarity assumption that Σt can be approximated as unchanging over each consecutive set of T frames.

As NT can be very large, even for moderately large N and T

the number of degrees of freedom (

A natural non-sparse alternative is to introduce structure is by modeling the covariance matrix Σ as the Kronecker product of two smaller matrices, i.e.

[2]. This model lends itself to coordinate decompositions [3, 1, 4]. For spatio-temporal data, we consider the natural decomposition of space (features) vs. time (frames) [1, 4]. In this setting, the S matrix is the “spatial covariance” and T is the “time covariance.”

where r is the separation rank.

This allows for more accurate approximation of the covariance when it is not in Kronecker product form but most of its energy is in the first few Kronecker components. An algorithm for fitting the model (3) to a measured sample covariance matrix was introduced in [1]. The Kronecker sum model does not naturally accommodate additive noise since the diagonal elements (variances) must conform to the Kronecker structure.

In this paper, we extend the Kronecker sum model, and the PRLS algorithm of [1], by adding a structured diagonal matrix to (3). This model is called the Diagonally Loaded Kronecker Sum model and, although it has an additional N parameters, we show that it does significantly better at predicting video data. We also derive the asymptotic Cramér-Rao lower bound on the estimation MSE of the ML predictor coefficients using both standard covariance and Kronecker estimation.

The rest of this paper is organized as follows. Section II introduces the diagonally loaded Kronecker sum model and a LS algorithm for its estimation. We also derive the CRB based asymptotic predictor performance gain when estimating Σ using the model of (2). In section III we present results on the accuracy of the multiple Kronecker representation of real-world video spatio-temporal covariances. Section IV presents our comparative prediction performance results using CMU activity video data, and we conclude the paper in Section V.

of a vector with non-overlapping subvectors

x and y the ML predictor of y given x is

where Σyx and Σx are the appropriate submatrices of Σ [8].

Although the Kronecker structure of video space-time covariance matrices is strong, the diagonal elements of any covariance matrix are strongly affected by any uncorrelated noise in the system [8], which does not replicate across the matrix in a Kronecker fashion. Hence, for example, the Kronecker estimate will overestimate positive in-frame correlations.Since the diagonal elements of a covariance matrix are highly important for determining the inverse of the matrix and by extension the predictor coefficients, this can cause a significant loss of accuracy.

To correct this problem, we thus propose to approximate the covariance using the r+1-Kronecker model

Following rearrangement of R to form B as in [11], this becomes the problem of finding a rank-one (low rank for multiple Kroneckers) approximation to a matrix B where the intersections of a set of rows and columns are not included in the LS objective function [11].

For notational simplicity, multiply B by permutation matrices to put it in the form

where the don’t cares are now contained in the (T×N) B22. We also divide the permuted rank r approximation matrices t and s in the same way, that is where ti,si are the columns of t,s. As shown in [11], the vectors ti,si can be rearranged to form the Kronecker factors Ti,Si respectively. We thus have

2) Solve the (biconvex) weighted LS rank r approximation problem in Equation (7). We use the iterative method of alternating projections [12] over t and s, initializing using the unweighted SVD solution since the number of missing values is relatively small (NT out of N2T2).

4) Determine U, which must be diagonal. We set uii=max{0,Rii−~Rii}, where ~R=∑ri=1Ti⊗Si and the zero cutoff exists as it helps preserve positive semidefiniteness. Further additions to U can be added for regularization.

We found that prediction accuracy is typically better if the diagonally loaded LS approximation is applied to the sample correlation instead of the sample covariance.

PR is a permutation matrix described in [11], and θS,θT,PS,PT are such that vec{T}=PTθT,vec{S}=PSθS (allowing for imposition of certain types of structure).

The predictor coefficients are A=ΣyxΣx−1. Let a=vec{A}. Then the asymptotic CRB of a is

where J is the Jacobian of a with respect to vec{Σ}. The values of J for the portions of Σ not used in the predictor coefficients are trivially zero. For the Σyx portion,

For the Σx portion,

Now that the CRB has been derived for the predictor coefficients, it is possible to obtain the asymptotic reduction in accuracy of the Kronecker based predictor ^y relative to the infinite training sample predictor. Assume that x,y are independent of the training samples. Without loss of generality, assume E[x]=0. Define

Thus E[e]=0. Also, by independence, Cov[^y−y]=Cov[e]+Cov[y|x]. Since the CRB assumes an unbiased estimator, assume that the estimator of A is unbiased. Then E[^A]=E[A]. The error covariance is then given by

For comparison, the asymptotic CRB for covariance estimation (arbitrary Σ) with no structural knowledge can be obtained by setting T=1,S=Σ in Equation (8).

For the computation of the sample covariance, we use a sliding window approach, where to obtain each new multiframe sample, the window is incremented by one frame. Linear dependence is avoided, but the samples are clearly not independent. However, it does improve the learning rate and enforces stationarity which could otherwise be lost in periodic situations.

We examine the accuracy of the Kronecker approximation for a video of blowing grass (15 frames/sec). Due to the size of the image, it is divided up into blocks for estimation. Figure 1 shows a still frame of the video, along with the variance image for reference. The % RMSE of using a single Kronecker factor to approximate the 15 frame, 2000 sample, sample covariances is shown for each 10×10 block. Due to the relatively low number of samples compared to the number of variables (1500), a significant portion of this error is likely due to noise in the sample covariance.

Figure 2 shows the Kronecker error for 3, 5, and 7 frame blocs as a function of downsampling factor and pixel block size.

We applied covariance estimation to the CMU human activity mocap videos. These videos are processed for the dataset to give the (x,y,z) position of a set of fixed points as a function of time (downsampled to 40 frames/sec) on the human as the human performs an activity. We used videos of a person walking, and performing fencing moves. This type of data would also arise in situations where feature points in a video are being tracked.

The points travel through space, causing mean drift. To remove this, we preprocessed the data by computing the error of a K frame ahead linear extrapolator (hereafter referred to as the zeroth order predictor) based on two frames close together in time. We then applied covariance estimation to the result. This setup allows for up to K ahead causal prediction of the original variables.

In Figure 3, we show LS Kronecker covariance approximation results for CMU videos of fencing (44 x,y,z points) and walking (downsampled to 14 points because of sample paucity). Approximations to a multiframe sample covariance learned using 500 and 100 samples respectively for the fencing and walking videos are considered. The RMS energy of the first 10 Kronecker product factors are shown for several different covariance sizes, as well as the % RMSE of using only the first Kronecker product. The low number of samples for the walking video especially creates noise in the sample covariance, thus the RMSE values are somewhat inflated relative to the true covariance.

Figure 5 shows the RMSE results for forward prediction averaged over 100 consecutive frames in the CMU fencing video as a function of learning sample size. Prediction methods compared are the original predictor, the sample covariance (after L2 regularization [3]), the standard LS Kronecker (2), and the diagonally corrected Kronecker. Using the original predictor corresponds to using the mean (0) as the prediction, thus it can always be achieved using infinite regularization. In Figure 5, the covariance is learned on the samples immediately prior to location at which prediction is occurring.

An additional prediction task which may arise is forward prediction in the case that more recent history is available for some variables than for others. In the two part case we want

where t1≠t2∈[1,T], I=[I1I2]. The predictor (Equation (4)) thus incorporates both “forward” and “sideways” prediction. For forward only prediction the structure of the single Kronecker model results in pixel predictions that are weighted averages of only the corresponding pixel values in the previous frames [8] with weights only a function of T. In the partial prediction case this structure disappears resulting in the use of cross-pixel information. Since S is typically larger than T, this results in an increase in the number of parameters. In addition, as discussed earlier, when uncorrelated noise is present the standard Kronecker has a tendency to overestimate inter-pixel correlations. Since the covariances we use have rather poor conditioning (large correlations) we expect the predictions using the standard Kronecker estimate to degrade significantly even for large numbers of samples and that the diagonally corrected method will result in better performance.

For this experiment, we used the walking video from the CMU dataset. Figure 7 shows the RMSE averaged over 100 frames of predicting 2/3 of the points (1/3 are observed at all times) 5 frames ahead using a 20-frame covariance. Note the failure of the standard Kronecker as anticipated, while the diagonally corrected Kronecker has lower error in the low sample regime than the regularized sample covariance.

We considered the sum of Kronecker products representation for covariance matrices developed in [1], and examined its applicability to spatio-temporal covariance estimation, especially in video. It was found that a small sum (usually two) of Kronecker factors is a good approximation to the covariance of the CMU videos, and due to the reduction in the number of parameters gives improved low-sample estimation as compared to the standard sample covariance matrix.

We also proposed a diagonally loaded sum-of-Kronecker products representation, which resulted in improved prediction performance. As an example application, we used it for prediction of human motion patterns in the CMU videos. In addition to the significant potential computational improvement of using a single Kronecker factor, it was found that the representation allowed accurate prediction using significantly fewer training samples than needed using the sample covariance matrix.

To analyze this gain, we derived the CRB for the predictor coefficients and the optimal asymptotic predictor performance assuming an underlying Kronecker covariance as well as for the unstructured covariance case.

In certain cases the use of multiple Kronecker factors using the diagonally corrected method gave improved performance as the number of samples increased sufficiently, whereas the standard method gave worse performance. This allowed the small sum-of-Kroneckers representation to be competitive even for large numbers of samples.