Answering a question of Abbasi-Zadeh, Bansal, Guruganesh, Nikolov, Schwartz and Singh (2018), we prove the existence of a slowed-down sticky Brownian motion whose induced rounding for MAXCUT attains the Goemans--Williamson approximation ratio. This is an especially simple particular case of the general rounding framework of Krivine diffusions that we investigate elsewhere. 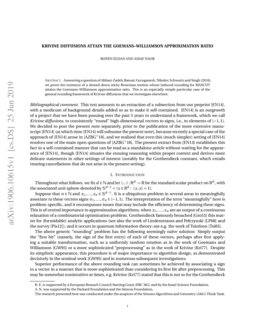 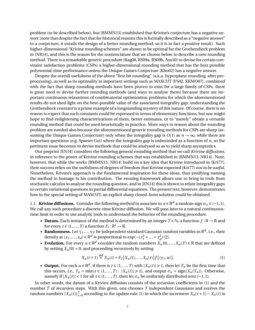 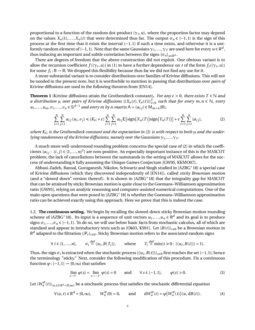 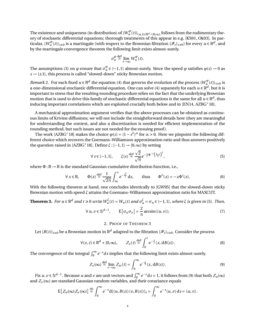 Throughout what follows, we fix d∈N and let ⟨⋅,⋅⟩:Rd→R be the standard scalar product on Rd, with the associated unit sphere denoted by Sd−1={x∈Rd: ⟨x,x⟩=1}.

Suppose that n∈N and x1,…,xn∈\SSd−1. It is a ubiquitous problem in several areas to meaningfully associate to these vectors signs \upsigma1,…,\upsigman∈{−1,1}. The interpretation of the term “meaningfully” here is problem-specific, and it encompasses issues that may include the efficiency of determining these signs. This is of central importance to approximation algorithms, when x1,…,xn

are an output of a continuous relaxation of a combinatorial optimization problem. Grothendieck famously broached

[Gro53] this matter for (formidable) analytic applications (see also the work of Lindenstrauss and Pełczynski [LP68] and the survey [Pis12]), and it occurs in quantum information theory; see e.g. the work of Tsirelson [Tsi85].

The above generic “rounding” problem has the following seemingly naïve solution: Simply output the “first bit” (namely, the sign of the first entry) of each of these vectors, perhaps after first applying a suitable transformation, such as a uniformly random rotation as in the work of Goemans and Williamson [GW95] or a more sophisticated “preprocessing” as in the work of Krivine [Kri77]. Despite its simplistic appearance, this procedure is of major importance to algorithm design, as demonstrated decisively in the seminal work [GW95] and in numerous subsequent investigations.

Superior performance of the above rounding task can sometimes be achieved by associating a sign to a vector in a manner that is more sophisticated than considering its first bit after preprocessing. This may be somewhat nonintuitive at times, e.g. Krivine [Kri77] stated that this is not so for the Grothendieck problem (to be described below), but [BMMN13] established that Krivine’s conjecture has a negative answer (note that despite the fact that for historical reasons this is formally described as a “negative answer” to a conjecture, it entails the design of a better rounding method, so it is in fact a positive result). Such higher-dimensional “Krivine rounding schemes” are shown to be optimal for the Grothendieck problem in [NR14], and this is the reason for the nomenclature that we choose below to describe a new rounding method. There is a remarkable generic procedure [Rag08, RS09a, RS09b, Aus10] to devise for certain constraint satisfaction problems (CSPs) a higher-dimensional rounding method that has the best possible polynomial-time performance unless the Unique Games Conjecture [Kho02] has a negative answer.

Despite the overall usefulness of the above “first bit rounding” (a.k.a. hyperplane rounding, after preprocessing), as well as its optimality in important settings such as MAXCUT

, combined with the fact that sharp rounding methods have been proven to exist for a large family of CSPs, there is great need to devise further rounding methods (and ways to analyse them) because there are important continuous relaxations of combinatorial optimization problems for which the aforementioned results do not shed light on the best-possible value of the associated integrality gap; understanding the Grothendieck constant is a prime example of a longstanding mystery of this nature. Of course, there is no reason to expect that such constants could be expressed in terms of elementary functions, but one might hope to find enlightening characterizations of them, better estimates, or to “merely” obtain a versatile rounding method that could be used heuristically in practice. More ways to reason about the rounding problem are needed also because the aforementioned generic rounding methods for CSPs are sharp (assuming the Unique Games Conjecture) only when the integrality gap is

O(1) as n→∞, while there are important questions (e.g. Sparset Cut) where the integrality gap is unbounded as a function of n, so the pertinent issue becomes to devise methods that could be analysed so as to yield sharp asymptotics.

Our preprint [EN14] considers the following general rounding method that we call Krivine diffusions, in reference to the power of Krivine rounding schemes that was established in [BMMN13, NR14]. Note, however, that while the works [BMMN13, NR14] build on a key idea that Krivine introduced in [Kri77]

, their success relies on the usefulness of degrees of freedom that Krivine expected

[Kri77] not to be useful. Nonetheless, Krivine’s approach is the fundamental inspiration for these ideas, thus justifying naming the method in homage to his contribution. The ensuing framework allows one to bring in tools from stochastic calculus to analyse the rounding question, and in [EN14]

this is shown to relate integrality gaps to certain variational questions in partial differential equations. The present text, however, demonstrates how in the special setting of MAXCUT, an explicit sharp closed-form solution could be obtained.

Consider the following method to associate to u∈Rd a random sign \upsigmau∈{−1,1}. We call any such procedure a discrete-time Krivine diffusion. We will pass later to a natural continuous-time limit in order to use analytic tools to understand the behavior of the rounding procedure.

In other words, the datum of a Krivine diffusion consists of the recursion coefficients in (1) and the number T of recursion steps. With this given, one chooses T independent Gaussians and evolves the random numbers {Xu(t)}Tt=0 according to the update rule (1) in which the increment Xu(t+1)−Xu(t) is proportional to a function of the random dot-product ⟨\upgammat,u⟩, where the proportion factor may depend on the values Xu(1),…,Xu(t) that were determined thus far. The output \upsigmau∈{−1,1} is the sign of this process at the first time that it exists the interval (−1,1) if such a time exists, and otherwise it is a uniformly random element of {−1,1}. Note that the same Gaussians \upgamma1,…,\upgammaT are used here for every u∈Rd, thus inducing an important and subtle correlation between the signs {\upsigmau}u∈Rd.

There are degrees of freedom that the above construction did not exploit. One obvious variant is to allow the recursion coefficient f(⟨\upgammat,u⟩) in (1) to have a further dependence on t of the form ft(⟨\upgammat,u⟩) for some ft:R→R. We dropped this flexibility because thus far we did not find any use for it.

where KG is the Grothendieck constant and the expectation in (2) is with respect to both \upmu and the underlying randomness of the Krivine diffusions, namely over the Gaussians \upgamma1,…,\upgammaT.

A much more well-understood rounding problem concerns the special case of (2) in which the coefficients {aij: (i,j)∈{1,…,n}2} are non-positive. An especially important instance of this is the MAXCUT problem; the lack of cancellations between the summands in the setting of MAXCUT allows for the success of understanding it fully assuming the Unique Games Conjecture [GW95, KKMO07].

Abbasi-Zadeh, Bansal, Guruganesh, Nikolov, Schwartz and Singh studied in [AZBG+18] a special case of Krivine diffusions (which they discovered independently of [EN14]), called sticky Brownian motion (and a “slowed down” version thereof). It is shown in [AZBG+18] that the integrality gap for MAXCUT that can be attained by sticky Brownian motion is quite close to the Goemans–Williamson approximation ratio [GW95], relying on analytic reasoning and computer-assisted numerical computations. One of the main open questions that were posed in [AZBG+18] is whether the Goemans–Williamson approximation ratio can be achieved exactly using this approach. Here we prove that this is indeed the case.

We begin by recalling the slowed-down sticky Brownian motion rounding scheme of [AZBG+18]. Its input is a sequence of unit vectors u1,…,un∈Rd and its goal is to produce signs \upsigma1,…,\upsigman∈{−1,1}. To do so, we will use below basic facts from stochastic calculus, all of which are standard and appear in introductory texts such as [Ok03, KS91]. Let {B(t)}t⩾0 be a Brownian motion in Rd adapted to the filtration {Ft}t⩾0. Sticky Brownian motion refers to the associated random signs

Thus, the sign \upsigmai is extracted when the stochastic process {⟨ui,B(t)⟩}t⩾0 first reaches the set {−1,1}; hence the terminology ”sticky.” Next, consider the following modification of this procedure. Fix a continuous function φ:[−1,1]→[0,∞) that satisfies

Let {Wφu(t)}(u,t)∈Rd×[0,∞) be a stochastic process that satisfies the stochastic differential equation

The existence and uniqueness (in distribution) of {Wφu(t)}(u,t)∈Rd×[0,∞) follows from the rudimentary theory of stochastic differential equations; thorough treatments of this appear in e.g. [KS91, Ok03]. In particular, {Wφu(t)}t⩾0 is a martingale (with respect to the Brownian filtration {Ft}t⩾0) for every u∈Rd, and by the martingale convergence theorem the following limit exists almost-surely.

The assumptions (3) on φ ensure that \upsigmaφu∈{−1,1} almost-surely. Since the speed φ satisfies φ(s)→0 as s→{±1}, this process is called “slowed-down” sticky Brownian motion.

For each fixed u∈Rd the equation (4) that governs the evolution of the process {Wφu(t)}\uptau⩾0 is a one-dimensional stochastic differential equation. One can solve (4) separately for each u∈Rd, but it is important to stress that the resulting rounding procedure relies on the fact that the underlying Brownian motion that is used to drive this family of stochastic differential equations is the same for all u∈Rd, thus inducing important correlations which are exploited crucially both below and in [EN14, AZBG+18].

A mechanical approximation argument verifies that the above processes can be obtained as continuous limits of Krivine diffusions; we will not include the straightforward details here (they are meaningful for understanding the context, and also a discretization is needed for efficient implementation of the rounding method, but such issues are not needed for the ensuing proof).

The work [AZBG+18] makes the choice φ(s)=(1−s2)\upalpha for \upalpha>0. Here we pinpoint the following different choice which recovers the Goemans–Williamson approximation ratio and thus answers positively the question raised in [AZBG+18]. Define ξ:[−1,1]→[0,∞) by setting

With the following theorem at hand, one concludes identically to [GW95] that the slowed-down sticky Brownian motion with speed ξ attains the Goemans–Williamson approximation ratio for MAXCUT.

Let {B(t)}t⩾0 be a Brownian motion in Rd adapted to the filtration {Ft}t⩾0. Consider the process

The convergence of the integral ∫∞0e−sds implies that the following limit exists almost-surely.

Fix u,v∈Sd−1. Because u and v are unit vectors and ∫∞0e−sds=1, it follows from (9) that both Zu(∞) and Zv(∞) are standard Gaussian random variables, and their covariance equals

Hence, by the original computation of Goemans and Wiliamson [GW95] (using elementary planar geometry), we have the following equality (Grothendieck’s identity [Gro53, LP68]) .

For every u∈Rd, consider the martingale that is defined by

By the martingale convergence theorem, we almost-surely have