We establish a scale separation of Kolmogorov width type between subspaces of a given Banach space under the condition that a sequence of linear maps converges much faster on one of the subspaces. The general technique is then applied to show that reproducing kernel Hilbert spaces are poor L^2-approximators for the class of two-layer neural networks in high dimension, and that two-layer networks with small path norm are poor approximators for certain Lipschitz functions, also in the L^2-topology. 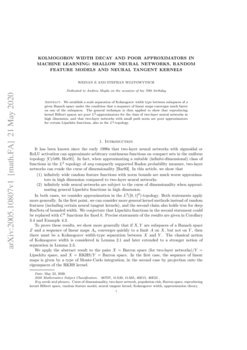 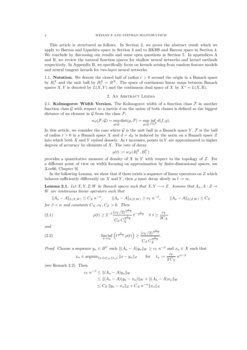 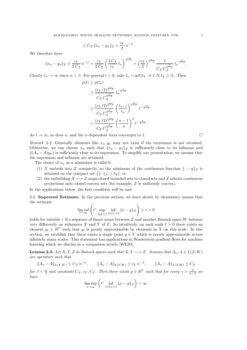 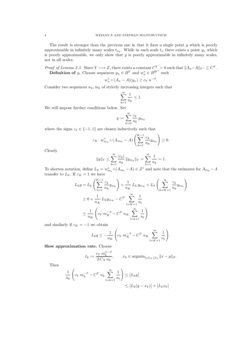 [Cyb89, Hor91]. In fact, when approximating a suitable (infinite-dimensional) class of functions in the L2 topology of any

In both cases, we consider approximation in the L2([0,1]d)-topology. Both statements apply more generally. In the first point, we can consider more general kernel methods instead of random features (including certain neural tangent kernels), and the second claim also holds true for deep ResNets of bounded width. We conjecture that Lipschitz functions in the second statement could be replaced with Ck functions for fixed k. Precise statements of the results are given in Corollary 3.4 and Example 4.3.

To prove these results, we show more generally that if X,Y are subspaces of a Banach space Z and a sequence of linear maps An converges quickly to a limit A on X, but not on Y, then there must be a Kolmogorov width-type separation between X and Y. The classical notion of Kolmogorov width is considered in Lemma 2.1 and later extended to a stronger notion of separation in Lemma 2.3.

We apply the abstract result to the pairs X= Barron space (for two-layer networks)/Y= Lipschitz space, and X= RKHS/Y=

Barron space. In the first case, the sequence of linear maps is given by a type of Monte-Carlo integration, in the second case by projection onto the eigenspaces of the RKHS kernel.

This article is structured as follows. In Section 2, we prove the abstract result which we apply to Barron and Lipschitz space in Section 3 and to RKHS and Barron space in Section 4. We conclude by discussing our results and some open questions in Section 5. In appendices A and B, we review the natural function spaces for shallow neural networks and kernel methods respectively. In Appendix B, we specifically focus on kernels arising from random feature models and neural tangent kernels for two-layer neural networks.

We denote the closed ball of radius r>0 around the origin in a Banach space by BXr and the unit ball by BX1=BX. The space of continuous linear maps between Banach spaces X,Y is denoted by L(X,Y) and the continuous dual space of X by X∗=L(X,R).

The Kolmogorov width of a function class F in another function class G with respect to a metric d on the union of both classes is defined as the biggest distance of an element in G from the class F:

In this article, we consider the case where G is the unit ball in a Banach space Y, F is the ball of radius t>0 in a Banach space X and d=dZ is induced by the norm on a Banach space Z into which both X and Y embed densely. As t increases, points in Y are approximated to higher degrees of accuracy by elements of X. The rate of decay

provides a quantitative measure of density of X in Y with respect to the topology of Z. For a different point of view on width focusing on approximation by finite-dimensional spaces, see [Lor66, Chapter 9].

In the following Lemma, we show that if there exists a sequence of linear operators on Z which behaves sufficiently differently on X and Y, then ρ must decay slowly as t→∞.

Let X,Y,Z,W be Banach spaces such that X,Y\xhookrightarrowZ. Assume that An,A:Z→W are continuous linear operators such that

The choice of xn as a minimizer is valid if

In the applications below, the first condition will be met.

In the previous section, we have shown by elementary means that the estimate

holds for suitable γ if a sequence of linear maps between Z and another Banach space W behaves very differently on subspaces X and Y of Z. So intuitively, on each scale t>0 there exists an element yt∈BY such that yt is poorly approximable by elements in X on this scale. In this section, we establish that there exists a single point y∈Y

which is poorly approximable across infinitely many scales. This statement has applications in Wasserstein gradient flows for machine learning which we discuss in a companion article

Let X,Y,Z be Banach spaces such that X,Y\xhookrightarrowZ. Assume that An,A∈L(Z,W) are operators such that

Since Y\xhookrightarrowZ, there exists a constant CY>0 such that ∥An−A∥Y∗≤CY.

Consider two sequences nk,mk of strictly increasing integers such that

We will impose further conditions below. Set

where the signs εk∈{−1,1} are chosen inductively such that

To shorten notation, define Lk=w∗mk∘(Amk−A)∈Z∗ and note that the estimates for Amk−A transfer to Lk. If εK=1 we have

and similarly if εK=−1 we obtain

Since tk was chosen precisely such that

For this lower bound to be meaningful, the first term in the bracket has to dominate the second term. We specify the scaling relationship between nk and mk as

In this definition, mk is not typically an integer unless 1α−β is an integer (or, to hold for a subsequence, rational). In the general case, we choose the integer ~mk closest to mk. To simplify the presentation, we proceed with the non-integer mk and note that the results are insensitive to perturbations of order 1.

In particular, note that tk→∞ as k→∞. In order for

for large enough k. Thus we can neglect the negative term on the left hand side of (2.3) at the price of a slightly smaller constant. Thus

Finally, we conclude that for all γ>βα−β we have

In this section, we apply Lemma 2.3 to the situation where general Lipschitz functions are approximated by functions in a space with much lower complexity. Examples include function spaces for infinitely wide neural networks with a single hidden layer and spaces for deep ResNets of bounded width. For simplicity, we first consider uniform approximation and then modify the ideas to also cover L2-approximation.

Consider the case where

We observe the following: If X

is the 1-Wasserstein distance between d-dimensional Lebesgue measure on the cube and the empirical measure generated by the random points – see [Vil08, Chapter 5] for further details on Wasserstein distances and the link between Lipschitz functions and optimal transport theory. The distance on Rd for which the Wasserstein transportation cost is computed is the same for which ϕ is 1-Lipschitz.

Empirical measures converge to the underlying distribution slowly in high dimension [FG15], by which we mean that

for some dimension-dependent constant d. Observe that also

where diam(Q) is a diameter of the d-dimensional unit cube with respect to the norm for which ϕ is 1-Lipschitz. Here we used that replacing ϕ by ϕ+c for c∈R does not change the difference of the two expectations, and that on the space of functions with ϕ(0)=0 the equivalence

holds. By ωd we denote the Lebesgue measure of the unit ball in Rd with respect to the correct norm.

For every n∈N we can choose n points x1,…,xn in Q such that

First, we prove the following. Claim: Let x1,…,xn be any collection of n points in Q. Then

Proof of claim: Choose ε>0 and consider the set

So any transport plan between Ld|Q and the empirical measure needs to transport mass ≥1−ωdεd by a distance of at least εn−1/d. We conclude that

The infimum is attained when

This concludes the proof of the claim.

Proof of the Lemma: Using the claim, any n points x1,…,xn such that

For any n, we fix such a collection of points xn1,…,xnn and define

Thus we can apply Lemma 2.3 with

There exists a 1-Lipschitz function ϕ on Q such that

Point evaluation functionals are no longer well defined if we choose Z=L2(Q). We therefore need to replace An by functionals of the type

for sample points Xni and find a balance between the radii εn shrinking too fast (causing the norms ∥An∥Z∗ to blow up) and εn shrinking too slowly (leading to better approximation properties on Lipschitz functions).

We interpret Q as the unit cube for function spaces, but as a d-dimensional flat torus when considering balls. Namely the ball Bε(x) in Q is to be understood as projection of the ball of radius ε>0 around [x] on Rd/Zd onto Q. This allows us to avoid boundary effects.

For every n∈N we can choose n points x1,…,xn in Q such that the estimates

L2-estimate. In all of the following, we rely on the interpretation of balls as periodic to avoid boundary effects. For a sample S=(X1,…,Xn) denote

is a dimension-dependent constant. Thus combining (3.1) and (3.2) we find that

This allows us to estimate