Modern non-autoregressive (NAR) speech recognition systems aim to accelerate the inference speed; however, they suffer from performance degradation compared with autoregressive (AR) models as well as the huge model size issue. We propose a novel knowledge transfer and distillation architecture that leverages knowledge from AR models to improve the NAR performance while reducing the model's size. Frame- and sequence-level objectives are well-designed for transfer learning. To further boost the performance of NAR, a beam search method on Mask-CTC is developed to enlarge the search space during the inference stage. Experiments show that the proposed NAR beam search relatively reduces CER by over 5 real-time-factor (RTF) increment. By knowledge transfer, the NAR student who has the same size as the AR teacher obtains relative CER reductions of 8/16 AISHELL-1 dev/test sets, and over 25 test-clean/other sets. Moreover, the  9x smaller NAR models achieve  25 relative CER/WER reductions on both AISHELL-1 and LibriSpeech benchmarks with the proposed knowledge transfer and distillation. 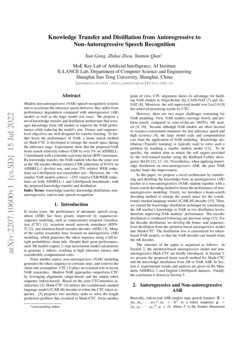 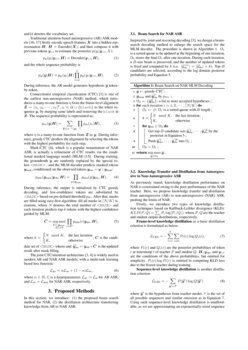 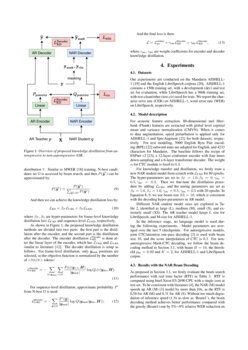 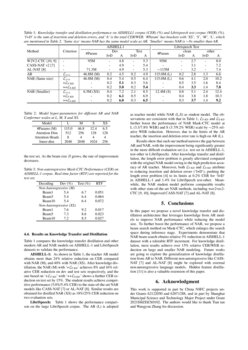 Listen Attentively, and Spell Once: Whole Sentence Generation via a Non-Autoregressive Architecture for Low-Latency Speech Recognition

In recent years, the performance of automatic speech recognition (ASR) has been greatly improved by sequence-to-sequence modeling, such as connectionist temporal classification (CTC)

. Many of the earlier researches have focused on autoregressive (AR) modeling, which generates the token sequence using a left-to-right probabilistic chain rule. Despite their great performance, such AR models require

. To be specific, the student aims to mimic the soft targets provided by the well-trained teacher using the Kullback-Leibler divergence (KLD)

[ghaz2019mask]. Then, we extend the knowledge distillation technique by transferring the AR teacher’s knowledge to NAR in two distillation levels, therefore improving NAR students’ performance. The encoder distillation is conducted following our previous setup [huang2018knowledgea]. For the decoder distillation, we develop the frame- and sequence-level distillation from the attention-based autoregressive model into Mask-CTC. The distillation loss is customized for token-based NAR models, so that the NAR decoder can benefit from the AR decoder.

The structure of the paper is organized as follows: In Section 2, the attention-based autoregressive model and non-autoregressive Mask-CTC are briefly introduced. In Section 3, we present the proposed beam search method for Mask-CTC and the knowledge distillation from AR to NAR ASR. In Section 4, experimental results and analysis are given on the Mandarin AISHELL-1 and English LibriSpeech datasets. Finally, the conclusion is drawn in Section 5.

Basically, end-to-end ASR models map speech features X=[x1,x2,⋯,xT]⊺,xt∈RF to a token sequence y=[y1,y2,⋯,yL]⊺,yl∈U, where F is the feature dimension and U denotes the vocabulary set.

into a hidden representation

H: H=Encoder(X), and then compose it with previous tokens y<l

to estimate the posterior

and the whole sequence probability is

Connectionist temporal classification (CTC) [graves2006ctc] is one of the earliest non-autoregressive (NAR) method, which introduces a many-to-one function η from the frame-level alignment Z=[z1,z2,⋯,zT]⊺,zt∈U∪{{% blank}} to the token sequence y, by merging same labels and removing the blank in Z. The sequence probability is represented as:

where η is a many-to-one function from Z to y. During inference, greedy CTC predicts the alignment by selecting the tokens with the highest probability for each step.

Mask-CTC [higuchi2020mask], which is a popular instantiation of NAR ASR, is actually a refinement of CTC results via the conditional masked language model (MLM) [ghaz2019mask]. During training, the groundtruth y are randomly replaced by the special token <MASK> , and the MLM decoder predicts masked tokens ymask, conditioned on the observed tokens yobs=y∖ymask:

During inference, the output is initialized by CTC greedy decoding, and low-confidence tokens are substituted by <MASK> based on pre-defined threshold pthr. After that, masks are filled using easy-first algorithm: fill all masks in ⌈N/K⌉ iterations, where N denotes the total number of <MASK> and each iteration predicts top-k tokens with the highest confidence guided by MLM:

where k={NmodK,the last iterationK,otherwise, C is the candidate set of <MASK> tokens and  ˆy′obs=yobs+^C  is the updated result after mask filling.

is widely used in modern AR and NAR ASR models, with a multi-task learning based loss function:

Latt=Lar for AR ASR, and Latt=Lmlm for NAR ASR, respectively.

In this section, we introduce: (1) the proposed beam search method for NAR, (2) the distillation architecture transferring knowledge from AR to NAR ASR.

Inspired by joint and rescoring decoding [hori2017joint], we design a beam-search decoding method to enlarge the search space for the MLM decoder. The procedure is shown in Algorithm 1. Ω1 is a sorted queue to be updated at the beginning of one iteration, Ω0 stores the final Ω1 after one iteration. During each iteration, a B-size beam is preserved, and the number of updated tokens is fixed and computed by k (i.e. |ˆyi+1obs|=|ˆyiobs|+k). Top-B

candidates are selected, according to the log domain posterior probability and Equation

Firstly, we introduce two types of knowledge distillation techniques based on Kullback-Leibler divergence (KLD): KLD(P,Q)=∑iPilog(Pi/Qi), where P,Q are the teacher and student output distributions, respectively.

where Pt(c) and Qt(c) are the posterior probabilities of token c at timestamp t of teacher P and student Q. H, yobs, and y<t are the conditions of the above probabilities, but omitted for simplicity. Pt(c)logPt(c) is omitted in computing KLD loss due to the frozen teacher during training.

where ˆyi is the hypotheses from teacher model, τ is the set of all possible sequences and similar omission as in Equation 7. Using such sequence-level knowledge distillation is unaffordable, as we are approximating an exponentially-sized sequence distribution τ . Similar to MWER [prabhavalkar2017minimum] training, N-best candidates set Ω is accessed by beam search, and then P(ˆyi) can be approximated by:

And then we can achieve the knowledge distillation loss by:

And the final loss is then:

where γenc,γdec are weight coefficients for encoder and decoder knowledge distillation.

For acoustic feature extraction, 80-dimensional mel filterbank (Fbank) features are extracted with global level cepstral mean and variance normalization (CMVN). When it comes to data augmentation, speed perturbation is applied only for AISHELL-1 and SpecAugment

[park2019specaugment] for both datasets, respectively. For text modeling, 5000 English Byte Pair encoding (BPE) [kudo2018sentencepiece] subword units are adopted for English, and 4233 characters for Mandarin. The baseline follows the recipe of ESPnet v2 [watanabe2018espnet], a 12-layer conformer encoder with four times down-sampling and a 6-layer transformer decoder. The weight α for CTC module is fixed to 0.3.

For knowledge transfer and distillation, we firstly train a new NAR student model from scratch with LF-KD

for 80 epochs. The hyper-parameters are set to

In the inference stage, no language model is used during the following experiments. Model parameters are averaged over the last 5 checkpoints. For autoregressive models, joint CTC/attention one-pass decoding [hori2017joint]

is used with beam size 10, and the score interpolation of CTC is 0.3. For non-autoregressive Mask-CTC decoding, we follow the beam decoding method in Section

4.3 Results with the NAR Beam Decoding

As proposed in Section 3.1, we firstly evaluate the beam search performance with real time factor (RTF) in Table 3. RTF is computed using Intel-Xeon E5-2690 CPU with a single core at test set. To be consistent with literature [higuchi2020mask], the NAR (M) model speeds up AR (M) [hori2017joint] model by more than 10x, as the RTF is 0.58 for AR (M) and 0.31 for AR (S). Without too much degradation of inference speed (1.5x as slow as ‘Beam1’), the beam decoding method achieves better performance compared with the greedy (Beam1) one by 5%∼9% relative WER reduction on the test set. As the beam size B grows, the rate of improvement decreases.

4.4 Results on Knowledge Transfer and Distillation

Table 1 compares the knowledge transfer distillation and other modern AR and NAR models on AISHELL-1 and LibriSpeech datasets to validate the performance.

AISHELL-1: As shown in Table 1, the teacher AR model obtains more than 24% relative reduction on CER compared with NAR (M), and 40% with NAR (XS). After knowledge distillation, the NAR (M) with ‘+LF-KD’ achieves 8% and 16% relative CER reduction on dev and test sets respectively, and the one based on ‘+LF-KD’ with ‘++LS-KD’ shows a further CER reduction on test set by 15%. The student results achieve competitive performance (5.0%/5.4% CER) to the state-of-the-art NAR models like CASS-NAT [fan2021improved] or AL-NAT [wang2022alignmentlearning]. Similar results are obtained for distilled NAR (XS) as 18%/25% CER reduction on two evaluation sets.

LibriSpeech: Table 1 shows the performance comparison on the large LibriSpeech corpus. The AR (L) is adopted as teacher model while NAR (L,S) as student model. The observations are consistent with that in Table 1, LF-KD and LS-KD further boost the performance of NAR Mask-CTC model at L (3.3/7.8% WER) and S (3.7/9.2% WER) scale by ∼25% relative WER reduction. However, due to the limits of the AR teacher, the insertion and deletion error rate is high on AR (L).

Results show that such our method narrows the gap between AR and NAR, with the improvement being significantly greater in the more difficult evaluation set (i.e. test set in AISHELL-1, test-other in LibriSpeech). After knowledge transfer and distillation, the length error problem is greatly alleviated compared with the original NAR model owing to the high prediction accuracy of AR teacher. Moreover, both LF-KD and LS-KD attribute to reducing insertion and deletion errors (‘I+D’), pushing the length error problem [higuchi2020mask] to its limits at 0.2% CER for ‘I+D’ in AISHELL-1 and 1.4% for LibriSpeech test-other. Meanwhile, the NAR student model performs comparable results with other state-of-the-art NAR methods, including wav2vec2-CTC [baevski_2020_wav2vec_20_framework, deng2022improving], Improved CASS-NAT [fan2021improved] and AL-NAT [wang2022alignmentlearning].

In this paper we propose a novel knowledge transfer and distillation architecture that leverages knowledge from AR models to improve NAR performance while reducing the model size. To further boost the performance of NAR, we propose a beam search method on Mask-CTC, which enlarges the search space during inference stage. Experiments demonstrate that NAR beam search obtains relative 5% reduction in AISHELL-1 dataset with a tolerable RTF increment. For knowledge distillation, most results achieve over 15% relative CER/WER reduction on large and smaller NAR modeling. Future works are going to explore the generalization of knowledge distillation from AR to NAR. Different non-autoregressive like CASS-NAT [fan2021improved] and AL-NAT [wang2022alignmentlearning]

[gou2021knowledge] is also a valuable extension of this paper.

This work is supported in part by China NSFC projects under Grants 62122050 and 62071288, and in part by Shanghai Municipal Science and Technology Major Project under Grant 2021SHZDZX0102. The authors would like to thank Tian tan and Wangyou Zhang for discussion.