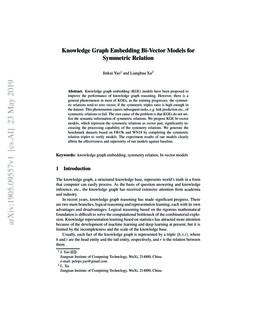 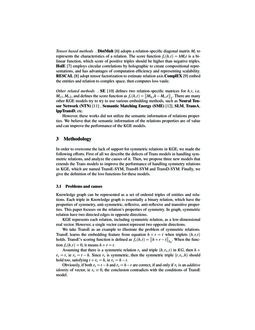 The knowledge graph, a structured knowledge base, represents world’s truth in a form that computer can easily process. As the basis of question answering and knowledge inference, etc., the knowledge graph has received extensive attention from academia and industry.

In recent years, knowledge graph reasoning has made significant progress. There are two main branches, logical reasoning and representation learning, each with its own advantages and disadvantages. Logical reasoning based on the rigorous mathematical foundation is difficult to solve the computational bottleneck of the combinatorial explosion. Knowledge representation learning based on statistics has attracted more attention because of the development of machine learning and deep learning at present, but it is limited by the incompleteness and the scale of the knowledge base.

Usually, each fact of the knowledge graph is represented by a triple (h,r,t), where h and t are the head entity and the tail entity, respectively, and r is the relation between them.

KGE aims to embed the entities and relations into low-dimensional real vectors, and then learns the representations of them. TransE [1] is the earliest KGE model and has derived a series of models called Trans series models or Trans models. Most of Trans models based on vector addition calculation, which are difficult to apply well in symmetric relations.

Two benchmark datasets, FB15k-SYM and WN18-SYM construced by us for running bi-vector models on them The experimental results show that our method can effectively improve the triple prediction accuracy of symmetry relations. The main contributions of this paper as follow.

, the first KGE model proposed, regards relation r as the translation from entity h to t. Entity t should be in the nearest neighborhood of h+r. The score function is defined as

Where Ln is usually as L1 norm or L2 norm. TransE can slove 1-1 relations effectively, but it is not suitable for handling 1-n, n-1 and n-n relations.

into the hyperplane which relation

Where Ln is usually as L2 norm. TransH is more accurate than TransE in terms of recognition rate of 1-n, n-1 and n-n relations.

Where Ln is usually as L2 norm.

. In addition to TransE(H,D) that we have already mentioned, translation based methods cover the following models. TransR [4] build entity and relation embedding independent spaces, in which, entities h,t∈Rk, and relation r∈Rd. A projection matrix Mr∈Rk×d has been set, and the score funcion is defined as fr(h,t)=∥∥Mrh+r−Mrt∥∥22. TransSparse [5] set two separate relation sparse matrices Mhr(θhr) and Mtr(θtr) to deal with the issue of sparse data. The score function is defined as ∥∥Mhr(θhr)h+r−Mtr(θtr)t∥∥Ln.TransF reduces the cost of calculation of relation projection by modeling subspaces of projection matrices, and the score function is defined as fr(h,t))=∥∥(∑si=1α(i)rU(i)+I)h+r+(∑si=1β(i)rV(i)+I)t∥∥Ln, where s∈R,U(i),V(i)∈Rde×dr, α(i)rU(i) and β(i)rV(i)+I)are the corresponding coefficients of U(i) and V(i).

. DistMult [6] adopts a relation-specific diagonal matrix Mr to represents the characteristics of a relation. The score function fr(h,t)=hMrt is a bilinear function, which score of positive triples should be higher than negative triples. HolE [7] employs circular correlations by holographic to create compositional representations, and has advantages of computation efficiency and representing scalability. RESCAL [8]

ComplEX [9] embed the entities and relation to complex space, then computes loss vaule.

In order to overcome the lack of support for symmetric relations in KGE, we made the following efforts. First of all we describe the defects of Trans models in handling symmetric relations, and analyze the causes of it. Then, we propose three new models that extends the Trans models to improve the performance of handling symmetry relations in KGE, which are named TransE-SYM, TransH-SYM and TransD-SYM. Finally, we give the definition of the loss functions for these models.

KGE represents each relation, including symmetric relation, as a low-dimensional real vector. However, a single vector cannot represent two opposite directions.

We take TransE as an example to illustrate the problem of symmetric relations. TransE learns the embedding feature from equation h+r=t when triplets (h,r,t) holds. TransE’s scoring function is defined as fr(h,t)=∥∥h+r−t∥∥Ln. When the function fr(h,t)=0, it means h+r=t.

Assuming that there is a symmetric relation rs and triple (h,rs,t) in KG, then h+rs=t, ie rs=t−h. Since rs is symmetric, then the symmetric triple (t,rs,h) should hold too, satisfying t+rs=h, ie rs=h−t.

Obviously, if both rs=t−h and rs=h−t are correct, if and only if rs is an additive identity of vector, ie rs≡→0, the conclusion contradicts with the conditions of TransE model.

Taking the symmetric relation spouse as an example, shown in figure1. When the fact (Trump,spouse,Melania) holds, the fact (Melania,spouse,Trump) holds too. let eTrump, eMelania and eMelania denote entities Melania, Trump and relation spouse, respectively. Then,

Aiming at these problems, bi-vector models for symmetric relation are presented in this study.

Different from most of KGE models, which represent entities and relations as single vector, we represent the symmetric relation rs as a bi-vector with two subvectors, r+s and r−s. Then, in each epoch of learning, the score functions of the two subvectors are calculated, and the better score is selected as the current result. Let frs(h,t) be the score function of the Trans series model, as show in Equation(7)

We have extended three different Trans models, which differ in their respective score functions. In TransE, score function is frs(h,t)=∥∥h+rs−t∥∥Ln, where Ln is L1 norm or L2 norm, and the score functions of subvectors are shown as Equation array(8),

frs(h,t) and rs should be substituted into the following loss function,

where λ>0 denotes the margin of hyperplane, and [x]+ denotes max(x,0). Similarly, the score function of the TransH model is shown in Equation array (10).

The score function of the TransH model is shown in Equation array (11).

The loss functions of them are calculated according to Equation (9).

In this study, we compared and analyzed the commonly used knowledge graph embedding benchmark data sets FB15k, FB15k-237, FB13, WN18, WN11 and WN18RR. FB15k, FB15k-237 and FB13 are extracted from Freebase[13], which is a large-scale common sense knowledge base provided the general facts of the world. Freebase was acquired by Google and is still under maintenance. WN18, WN11 and WN18R aextract from WordNet [14] and provide semantic knowledge of words.

We count the ratio of the symmetric relations in the data set shown in the table 1. It can be seen that the proportion of symmetric data of the WN18 and FB15k data set are relatively high.

The proportion of symmetric data for relation r is denoted as ζr by the paper. We regard r as symmetric relation When ζr exceeds the threshold111In this paper, the threshold is set to 0.5..

In order to simplify the problem, in this paper, symmetry is only judged by data distribution.We complement the missing symmetric triples in dataset of the symmetric relation. A more formal description is, if relation rs in knowledge graph KG is symmetric, for ∀(h,rs,t)∈KG, if (t,rs,h)∉KG and then KG=KG∪(t,r,h).

In order to show the superiority of our models, we compare the following benchmark KGE models.

projects h and t to the hyperplane where r located, to solve the relations of 1-n, n-1 and n-n.

uses the entity-relation matrix to obtain a more fine-grained distinction of realtion.

In order to verify the problem of the Trans models described in Section 3.1, We have designed the following experiments, the steps are as follows.

This paper introduces symmetry semantics into KGE models, and points out the defect of the state-of-the-art KGE models learning symmetric relations. Bi-vector models proposed by us can improve the situation of low recognition rate of symmetric relations in Trans models.