The problem of offline to online script conversion is a challenging and an ill-posed problem. The interest in offline to online conversion exists because there are a plethora of robust algorithms in online script literature which can not be used on offline scripts. In this paper, we propose a method, based on heuristics, to extract online script information from offline bitmap image. We show the performance of the proposed method on a real sample signature offline image, whose online information is known. 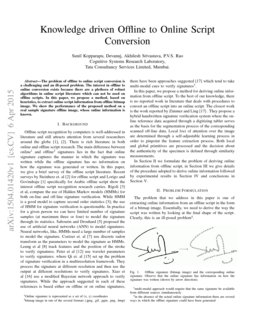 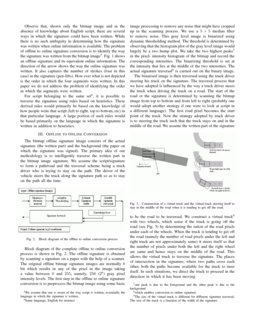 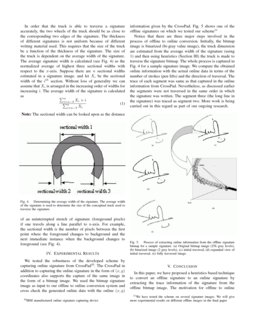 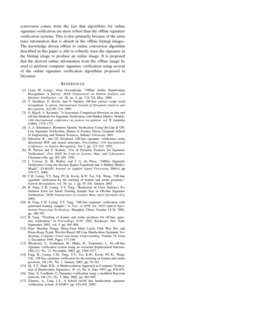 et al, compare the use of Hidden Markov models (HMMs) for both on-line and off-line signature verification. While HMM is a good model to capture second order statistics

[3]; the use of HMM for signature verification is questionable. In practice for a given person we can have limited number of signature samples (at maximum three or four) to model the signature through its statistics. Sabourin and Drouhard [5]

proposed the use of artificial neural networks (ANN) to model signatures. Neural networks, like, HMMs need a large number of samples to model the signature. Coetzer et. al

use a modified Bayesian network approach to verify signatures. While the approach suggested in each of these references is based either on offline or on online signatures, there have been approaches suggested

[17] which tend to take multi-modal cues to verify signatures333multi-modal approach would require that the same signature be available from different sources simultaneously.

In this paper, we propose a method for deriving online information from offline script. To the best of our knowledge, there is no reported work in literature that deals with procedures to convert an offline script into an online script. The closest work is the work reported by Zimmer and Ling [17]

. They propose a hybrid handwritten signature verification system where the on-line reference data acquired through a digitizing tablet serves as the basis for the segmentation process of the corresponding scanned off-line data. Local foci of attention over the image are determined through a self-adjustable learning process in order to pinpoint the feature extraction process. Both local and global primitives are processed and the decision about the authenticity of the specimen is defined through similarity measurements.

The problem that we address in this paper is one of extracting online information from an offline script in the form of a bitmap image. Essentially, we need to derive the way the script was written by looking at the final shape of the script. Clearly, this is an ill-posed problem444in the absence of the actual online signature information there are several ways in which the offline signature could have been generated.

For script belonging to the same set666Same language, English for instance, it is possible to traverse the signature using rules based on heuristics. These derived rules would primarily be based on the knowledge of how people write that script (left to right, top to bottom, etc) in that particular language. A large portion of such rules would be based primarily on the language in which the signature is written in addition to heuristics.

Block diagram of the complete offline to online conversion process is shown in Fig. 2. The offline signature is obtained by scanning a signature on a paper with the help of a scanner. The original offline bitmap signature images are normally 8 bit which results in any of the pixel in the image taking a value between 0 and 255, namely, 256 (28) gray pixel intensity levels. The first step in the offline to online signature conversion is to preprocess the bitmap image using some basic image processing to remove any noise that might have cropped up in the scanning process. We use a 5×5

median filter to remove noise. This gray level image is binarized using dynamic thresholding method. The threshold is determined by observing that the histogram plot of the gray level image would largely be a two hump plot. We take the two highest peaks

777one peak is due to the foreground and the other peak is due to the background in the pixel- intensity histogram of the bitmap and record the corresponding intensities. The binarizing threshold is set at the intensity that lies at the middle of the two intensities. The actual signature traversal888which enables conversion to online signature is carried out on the binary image.

The binarised image is then traversed using the truck driver steering his truck on the signature. The traversal process that we have adopted is influenced by the way a truck driver steers the truck when driving the truck on a road. The start of the road or the signature is determined by scanning the bitmap image from top to bottom and from left to right (probably one would adopt another strategy if one were to look at script in a different language). The first road pixel becomes the start point of the truck. Now the strategy adopted by truck driver is to steering the truck such that the truck stays on and in the middle of the road.

We assume the written part of the signature to be the road to be traversed. We construct a virtual truck999The size of the virtual truck is different for different signature traversal. The size of the truck is a function of the width of the signature. with two wheels, which sense if the truck is going off the road (see Fig. 3) by determining the ration of the road pixels under each of the wheels. When the truck is tending to get off the road (namely the number of road pixels under the left and right truck are not approximately same) it steers itself so that the number of pixels under both the left and the right wheel are same and hence stays on the middle of the road. This allows the virtual truck to traverse the signature. The places of intersection in the signature, where two paths cross each other, both the paths become available for the truck to steer itself. In such situations, we direct the truck to proceed in the direction in which it has been moving.

sectional widths estimated in a signature image. and let

Xi be the sectional width of the ith section. Without loss of generality we can assume that Xi is arranged in the increasing order of widths for increasing i. The average width of the signature is calculated as

We tested the robustness of the developed scheme by capturing online signature from CrossPad101010IBM manufactured online signature capturing device. The CrossPad in addition to capturing the online signature in the form of (x,y) coordinates also supports the capture of the same image in the form of a bitmap image. We used the bitmap signature image as input to our offline to online conversion system and cross check the generated online data with the online (x,y) information given by the CrossPad. Fig. 5 shows one of the offline signatures on which we tested our scheme111111We have tested the scheme on several signature images. We will give more experimental results on different offline images in the final paper

Notice that there are three major steps involved in the process of offline to online conversion. Initially, the bitmap image is binarized (bi-gray value image), the truck dimension are estimated from the average width of the signature (using 1) and then using heuristics (Section III) the truck is made to traverse the signature bitmap. The whole process is captured in Fig. 4 for a sample signature image. We compare the obtained online information with the actual online data in terms of the number of strokes (pen lifts) and the direction of traversal. The trace of each segment was same as that captured in the online information from CrossPad. Nevertheless, as discussed earlier the segments were not traversed in the same order in which the signature was written. The segment three (the long line in the signature) was traced as segment two. More work is being carried out in this regard as part of our ongoing research.