The learning of the region proposal in object detection using the deep neural networks (DNN) is divided into two tasks: binary classification and bounding box regression task. However, traditional RPN (Region Proposal Network) defines these two tasks as different problems, and they are trained independently. In this paper, we propose a new region proposal learning method that considers the bounding box offset's uncertainty in the objectness score. Our method redefines RPN to a problem of minimizing the KL-divergence, difference between the two probability distributions. We applied KL-RPN, which performs region proposal using KL-Divergence, to the existing two-stage object detection framework and showed that it can improve the performance of the existing method. Experiments show that it achieves 2.6 Faster R-CNN with VGG-16 and R-FCN with ResNet-101 backbone, respectively. 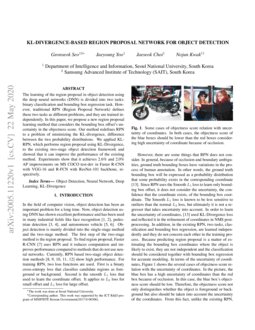 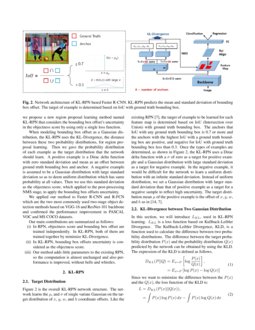 For training RPN, two loss functions are used. First is a binary cross-entropy loss that classifies candidate regions as foreground or background. Second is the smooth

L1 loss that used to learn the coordinate offset. It applies to L2 loss for small offset and L1 loss for large offset.

L2 loss, but ultimately it is not a regressor that takes uncertainty into account. In order to learn the uncertainty of coordinates, [9]

used KL-Divergence loss and reflected it in the refinement of coordinates in NMS post-processing. In addition, in the existing RPN, two tasks, classification and bounding box regression, are learned independently and they do not concern each other in the training process. Because predicting region proposal is a matter of estimating the bounding box coordinates where the object is likely to exist, they are not independent and the classification should be considered together with bounding box regression for accurate modeling. In terms of the uncertainty of coordinates, Figure

We applied our method to Faster R-CNN and R-FCN which are the two most commonly used two-stage object detection methods based on VGG-16 and ResNet-101 backbone and confirmed the performance improvement in PASCAL VOC and MS COCO datasets.

In this section, we will introduce LKL, used in KL-RPN learning. LKL

P(x) and the probability distribution Q(x) predicted by the network can be obtained by using the KLD. The expression of the KLD is defined as follows.

Since we want to minimize the difference between the P(x) and the Q(x), the loss function of the KLD is:

When P(x) is a negative sample, we regard it as Gaussian distribution with N(μ1=0,σ21=13). And We predicted the β=log(σ22) as [9] to prevent gradient exploitation of σ. Considering only the terms related to the gradient, we can rearrange the loss equation as follows.

As mentioned above, we regard the distribution of positive examples as a Dirac delta function with a standard deviation of zero as in [9].

Here, μ1 is the offset between the ground truth bounding box and anchor. Now we will discuss the KLD between the Dirac delta function and the Gaussian distribution. In equation (2), the probability exists only at x=μ1, the KLD is:

In here, the H(P(x)) is entropy of P(x). By leaving the term related to the gradient, the loss equation can be summarized as follows.

As described in Section 2.1, for each example, the target to be learned is determined based on IoU between ground truth bounding box and anchor. In each case, the loss function is described as follows.

After the RoIs through KL-RPN are detected, we pool the RoIs from KL-RPN and finally perform classification and regression on each RoIs as in [17, 2]. In this stage, the loss functions are Lcls and Lreg, respectively. The total loss equation for training the entire object detection network is:

Here, σ2 is the standard deviation that the network predicted and ϵ was set to 1e−12 to prevent division by zero. Following the section 2.2 and 2.3, the σ2 for the x, y, w, and h offsets will be close to zero for a positive example and close to σ1 for a negative example. Therefore, the lower σ2, the better positive sample can be considered. When the RoIs predicted by KL-RPN come out, the classification and regression of the second stage of the [17, 2] are performed by doing the NMS based on the objectness score in the order of bigger. In this part, training is performed in the same manner as in [17, 2].

We applied KL-RPN to Faster R-CNN and R-FCN, both of which are two-stage object detection method used RPN. [20] was used as the baseline of the experiment, and used VGG-16 [18] and ResNet-101 [8]

dataset were used for training. In all experiments, we used a PyTorch

Because of the divergence in the training process, Adam [11] was used as the optimizer with its parameters β1 and β2 being 0.9 and 0.999. In addition, the batch sizes are different for each reference experiment. Therefore, different settings were made, and the contents are shown in Table 1 and Table 2. We train the network on 4 Pascal X (Maxwell) GPUs. RoI-Align [7] is adopted in all experiments. The additional parameters of KL-RPN were initialized to N(0,0.00001)

. And no gradient clip in VGG-16 backbone. The first convolution layer in ResNet-101 are fixed while training. The rest of the experiment setting was conducted in the same manner as

3.2 Distribution of offset according to the objectness score

Table 1 and Table 2 are experiment results. In PASCAL VOC experiment, using KL-RPN increased the mAP, especially in the VGG-16 backbone. In MS COCO experiment, using KL-RPN with Faster R-CNN, there are 2.6 AP improvement in VGG16 and 0.2 AP improvement in ResNet-101. In addition, the detection performance is improved more on the large objects than the medium. Also, the performance is improved without significant change of parameters and inference time. With R-FCN, the results show that the AP increases 2% compared to the existing RPN, which shows a higher performance improvement than when applied to Faster R-CNN. When we apply our method to the fully convolution method of two-stage object detection, the effect is greater.

In this paper, we proposed the new region proposal method which defines region proposal problem as one task using KL-Divergence by considering bounding box offset’s uncertainty in the objectness score. The positive sample is considered a Dirac delta function and the negative sample is considered a Gaussian distribution so that the model with Gaussian distribution minimizes the KL-Divergence between them. By using KL-Divergence loss, the network has the advantage of predicting the standard deviation of the offset from the ground truth bounding box and use it as the objectness score. Experiments show that by applying KL-RPN in existing two-stage object detection, the performance is improved and proved that the existing RPN can be replaced successfully.