This research proposes the econophysics kinetic market model as an evolutionary algorithm's instance. The immediate results from this proposal is a new replacement rule for family competition genetic algorithms. It also represents a starting point to adding evolvable entities to kinetic market models. 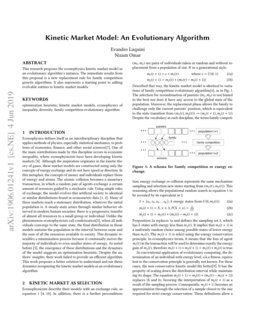 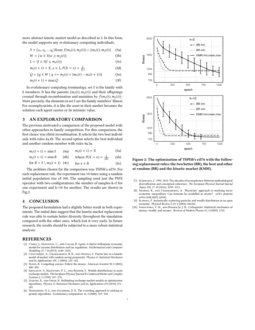 Econophysics defines itself as an interdisciplinary discipline that applies methods of physics, especially statistical mechanics, to problems of economics, finance, and other social sciences(schinckus20161996, ). One of the main contributions made by this discipline occurs in economic inequality, where econophysicists have been developing kinetic markets (sharma2016physicists, ). Although the inspiration originates in the kinetic theory of gases, these market models are constructed using only the concepts of energy exchange and do not have speed or direction. In this metaphor, the concepts of money and individuals replace those of energy and atoms. The atomic collision becomes a monetary transaction, in which a random pair of agents exchange a certain amount of resources guided by a stochastic rule. Using simple rules of exchange, the model evolves this artificial society to identical or similar distributions found in econometric data (chatterjee2004pareto, ; cerda2013lgem, ). Many of these markets reach a stationary distribution, whatever the initial population is. A steady-state arises through similar behavior observed in modern human societies: there is a progressive transfer of almost all resources to a small group or individual. Unlike the phenomenon econophysicists call condensation(hayes2002computing, ), when all individuals converge to the same state, the final distribution in those models sustains the population in the interval between none and the sum of all the resources available to society. This dynamic resembles a minimization process because it continually moves the majority of individuals to even smaller states of energy. As noted before (luquini2018rethinking, ), the emergence of these distributions and the dynamics of the model suggests an optimization heuristic. Despite the authors’ insights, their work failed to provide an efficient algorithm. This work proposes a better solution to understand and use those dynamics recognizing the kinetic market models as an evolutionary algorithm.

Econophysicists describe their models with an exchange rule, as equation 1 (ispolatov1998wealth, ; yakovenko2009colloquium, ). In addition, there is a further precondition: (mi,mj) are pairs of individuals taken at random and without replacement from a population of size N in a generational style.

Described that way, the kinetic market model is identical to variations of family competition evolutionary algorithm(mengshoel2008crowding, ), as in Fig. 1. The selection for recombination of parents (mi,mj) is not biased to the best nor does it have any access to the global state of the population. Moreover, the replacement phase allows the family to challenge only the current parents’ position, which is equivalent to the state transition from (mi(t),mj(t))→(mi(t+1),mj(t+1)).

Despite the vocabulary in each discipline, the terms family competition, energy exchange or collision represents the same mechanism: sampling and selection new states starting from (mi(t),mj(t)). This reasoning allows the populational random search in equation 1 to be revealed by its equivalent in 2.

Proposition 2a replaces 1a and defines the sampling set S, which has k states with energy less than mi(t). It implies that mi(t+1) is a uniformly random choice among possible states of lower energy than mi(t). The mj(t+1) is select using the energy conservation principle. In econophysics terms, it means that the loss of agent mi(t) in the transaction will be used to determine exactly the energy gain of mj(t), therefore mi(t+1)+mj(t+1)=mi(t)+mj(t) is true.

In conventional application of evolutionary computing, the determination of an individual with energy level, a.k.a fitness, equivalent to the conservation principle is generally not known. For these cases, the non-conservative kinetic model fits better

(slanina2004inelastically, ). It has the property of scaling down the distribution interval while maintaining its shape. The equation mj(t+1)≈mj(t)+(mi(t)−mi(t+1)) replaces 1b and 2c, favoring the interpretation of mj(t+1) as a result of the sampling process. Consequently, mj(t+1) becomes an approximation through the selection of a sample closest to the one required for strict energy conservation. These definitions allow a more abstract kinetic market model as described in 3. In this form, the model supports any evolutionary computing individuals.

In evolutionary computing terminology, set S is the family with k members. It has the parents {mi(t),mj(t)} and their offsprings created through recombination and mutation by f(mi(t),mj(t)) . More precisely, the elements in set S are the family members’ fitness. For econophysicists, it is like the asset in their market becomes the solution each agent carries or its intrinsic value.

The problem chosen for the comparison was TSPlib’s eil76. For each replacement rule, the experiment ran 10 times using a random initial population size of 100. The sampling used just the PMX operator with two configurations: the number of samples k=2 for one experiment and k=10 for another. The results are shown in Fig.2.

The proposed formulation had a slightly better result in both experiments. The initial data suggest that the kinetic market replacement rule was able to sustain better diversity throughout the simulation compared with the other ones, which lost it very early. In future research, the results should be subjected to a more robust statistical analysis.