We apply the method of moments to prove a recent conjecture of Haikin, Zamir and Gavish (2017) concerning the distribution of the singular values of random subensembles of Paley equiangular tight frames. Our analysis applies more generally to real equiangular tight frames of redundancy 2, and we suspect similar ideas will eventually produce more general results for arbitrary choices of redundancy. 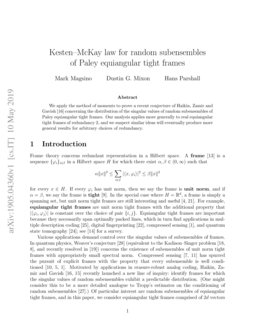 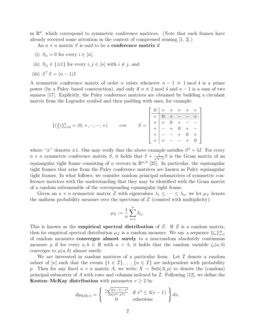 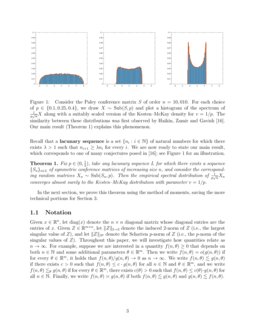 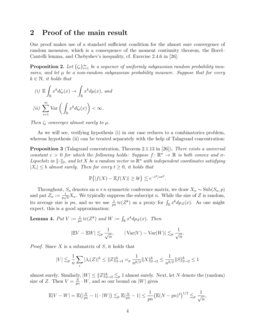 for every x∈H. If every φi has unit norm, then we say the frame is unit norm, and if α=β, we say the frame is tight [9]. In the special case where H=Rd, a frame is simply a spanning set, but unit norm tight frames are still interesting and useful [4, 21]. For example, equiangular tight frames are unit norm tight frames with the additional property that |⟨φi,φj⟩| is constant over the choice of pair {i,j}. Equiangular tight frames are important because they necessarily span optimally packed lines, which in turn find applications in multiple description coding [25], digital fingerprinting [22], compressed sensing [1], and quantum state tomography [24]; see [14] for a survey.

Various applications demand control over the singular values of subensembles of frames. In quantum physics, Weaver’s conjecture [28] (equivalent to the Kadison–Singer problem [18, 8], and recently resolved in [19]) concerns the existence of subensembles of unit norm tight frames with appropriately small spectral norm. Compressed sensing [7, 11] has spurred the pursuit of explicit frames with the property that every subensemble is well conditioned [10, 5, 1]. Motivated by applications in erasure-robust analog coding, Haikin, Zamir and Gavish [16, 15]

A symmetric conference matrix of order n exists whenever n−1≡1mod4 is a prime power (by a Paley–based construction), and only if n≡2mod4 and n−1 is a sum of two squares [17]

. Explicitly, the Paley conference matrices are obtained by building a circulant matrix from the Legendre symbol and then padding with ones, for example:

Given an n×n symmetric matrix Z

denote the uniform probability measure over the spectrum of

This is known as the empirical spectral distribution of Z. If Z

is a random matrix, then its empirical spectral distribution

μZ is a random measure. We say a sequence {ζi}∞i=1 of random measures converges almost surely to a non-random absolutely continuous measure μ if for every a,b∈R with a<b

, it holds that the random variable

We are interested in random matrices of a particular form. Let I denote a random subset of [n] such that the events {1∈I},…,{n∈I} are independent with probability p. Then for any fixed n×n matrix A, we write X∼Sub(A,p) to denote the (random) principal submatrix of A with rows and columns indexed by I. Following [12], we define the Kesten–McKay distribution with parameter v≥2 by

Recall that a lacunary sequence is a set {ni:i∈N} of natural numbers for which there exists λ>1 such that ni+1≥λni for every i. We are now ready to state our main result, which corresponds to one of many conjectures posed in [16]; see Figure 1 for an illustration.

Fix p∈(0,12), take any lacunary sequence L for which there exists a sequence {Sn}n∈L of symmetric conference matrices of increasing size n, and consider the corresponding random matrices Xn∼Sub(Sn,p). Then the empirical spectral distribution of 1p√nXn converges almost surely to the Kesten–McKay distribution with parameter v=1/p.

In the next section, we prove this theorem using the method of moments, saving the more technical portions for Section 3.

2 Proof of the main result

Our proof makes use of a standard sufficient condition for the almost sure convergence of random measures, which is a consequence of the moment continuity theorem, the Borel–Cantelli lemma, and Chebyshev’s inequality, cf. Exercise 2.4.6 in [26]:

As we will see, verifying hypothesis (i) in our case reduces to a combinatorics problem, whereas hypothesis (ii) can be treated separately with the help of Talagrand concentration:

There exists a universal constant c>0 for which the following holds: Suppose f:Rn→R is both convex and σ-Lipschitz in ∥⋅∥2, and let X be a random vector in Rn with independent coordinates satisfying |Xi|≤b almost surely. Then for every t≥0, it holds that

Throughout, Sn denotes an n×n symmetric conference matrix, we draw Xn∼Sub(Sn,p) and put Zn:=1p√nXn. We typically suppress the subscript n. While the size of Z is random, its average size is pn, and so we use 1pntr(Zk) as a proxy for ∫RxkdμZ(x). As one might expect, this is a good approximation:

Since X is a submatrix of S, it holds that

almost surely. Similarly, |W|≤∥Z∥k2→2≲p1 almost surely. Next, let N denote the (random) size of Z. Then V=Npn⋅W, and so our bound on |W| gives

where the last step applies the fact that N

has binomial distribution. This immediately implies the desired bound on

which completes the result. ∎

As such, to demonstrate hypothesis (i) from Proposition 2 in our case, it suffices to prove

The Kesten–McKay moments are implicitly computed in [20], and are naturally expressed in terms of entries of Catalan’s triangle:

Recalling that Z=1p√nX, then Proposition 5 gives that (1) is equivalent to

where B(n,k) denotes an entry of Borel’s triangle:

To compute these limits, we first find a convenient expression for 1nk/2+1Etr(Xk). To this end, recall that X is the submatrix of S with index set I, and let P denote the random n×n diagonal matrix such that Pii=1{i∈I}. Then

First, we introduce some additional notation. Taking inspiration from Bargmann invariants [3], it is convenient to write

With this, we define

Considering (3), it therefore holds that

As such, to demonstrate (2), it suffices to determine the limit of Vn(π) for every partition π of [k]. We start with a quick calculation:

The proof of Lemma 7 is rather technical (involving multiple rounds of induction), and so we save it for Section 3. In the meantime, we demonstrate how Lemma 7 can be applied to prove that the coefficients in (4) converge to the coefficients in (2). Recall that a Dyck path of semi-length n is a path in the plane from (0,0) to (2n,0) consisting of n steps along the vector (1,1), called up-steps, and n steps along the vector (1,−1), called down-steps, that never goes below the x-axis. We say a Dyck path is strict if none of the path’s interior vertices reside on the x-axis. Each (strict) Dyck path determines a sequence of 2n letters from {U,D} that represent up- and down-steps in the path; this sequence is known as a (strict) Dyck word. With these notions, we may prove the following result by leveraging the fact that Borel’s triangle counts so-called marked Dyck paths [6]; see Figure 2 for an illustration.

When t<k/2+1, the result follows from Lemma 6, and when k is odd, the k edges in each Gπ fail to partition into even simple cycles, and so the result follows from Lemma 7(i). Now suppose k is even and t≥k/2+1. For π∈EC(k,t), recall that the edges of Gπ are indexed by [k] and partitioned into simple even cycles. Define MD(π) to be the words w:[k]→{U,U′,D} such that for every simple cycle in Gπ with edges indexed by T⊆[k], the restriction w|T is a strict Dyck word with all but its first up-steps marked (here, U′ denotes a marked up-step). Note that strict Dyck words of semi-length s are in one-to-one correspondence with Dyck words of semi-length s−1, and so there are Cs−1 of them. As such, Lemma 7 implies that for every π∈Π(k,t), it holds that

Then equations (5) and (6) together give

where the last step applies Theorem 2 in [6]. ∎

At this point, we are in a position to verify hypothesis (i) from Proposition 2 in our case. For hypothesis (ii), we follow the approach suggested by Remark 2.4.5 in [26]

Define Y:=1p√nPSP, and observe that

Since Y commutes with P and YP=Y, the binomial theorem gives

and so rearranging gives

The following estimate holds for any choice of random variables {Xi}i∈[m]:

The lemma follows from applying this estimate to (7) by induction on k. ∎

Next, we establish the convexity and Lipschitz continuity required by Talagrand:

We adopt the shorthand notation Dx:=diag(x). First, f is convex since ∥⋅∥S2k satisfies the triangle inequality and t↦t2k is convex:

To compute a Lipschitz bound, we apply the factorization

where the last step follows from the fact that ∥FDx∥2→2≤2∥F∥2→2≤2√2, meaning u≤2√2n1/2k (and similarly for v). Next, we apply the reverse triangle inequality to get

which implies the result. ∎

Finally, we apply Talagrand concentration to obtain a variance bound:

Given the mapping f from Lemma 10, define ~f:Rn→R in terms of subgradients by

This is known as the smallest convex extension of f to Rn, and it is straightforward to verify that ~f is convex and (8kkn1−1/2k)-Lipschitz with ~f|R=f. Let B∈Rn have independent entries, each equal to 1 with probability p and 0 otherwise. Since B∈R almost surely, it holds that ~f(B) has the same distribution as ∥FP∥2kS2k, and we let E denote its expectation. By Talagrand concentration (Proposition 3), there exists c>0 such that

Combining with Lemma 9 then gives

We may now verify hypotheses (i) and (ii) from Proposition 2 in our case.

Put Zn:=1p√nXn and μ:=μKM(1/p). First, we modify the random measure μZn so that we may apply Proposition 2 to prove the result. Indeed, μZn fails to be a probability measure with probability (1−p)n, since μZn=0 when I=In is the empty set. To rectify this, we define

almost surely, and so the left-hand side inherits moments from the right-hand side.

To apply Proposition 2, we first observe that

As such, {ζn}n∈L satisfies hypothesis (i) from Proposition 2. Next, Lemma 11 establishes that Var(1pntr(Zkn))≲p,kn−1/k, and so Lemma 4 implies

As such, {ζn}n∈L also satisfies hypothesis (ii) from Proposition 2, and so ζn→μ almost surely, as desired. ∎

It remains to compute, for each π∈Π(k,t), the limit of

We begin with some basic properties of Δ.