We provide a CV-TMLE estimator for a kernel smoothed version of the cumulative distribution of the random variable giving the treatment effect or so-called blip for a randomly drawn individual. We must first assume the treatment effect or so-called blip distribution is continuous. We then derive the efficient influence curve of the kernel smoothed version of the blip CDF. Our CV-TMLE estimator is asymptotically efficient under two conditions, one of which involves a second order remainder term which, in this case, shows us that knowledge of the treatment mechanism does not guarantee a consistent estimate. The remainder term also teaches us exactly how well we need to estimate the nuisance parameters to guarantee asymptotic efficiency. Through simulations we verify theoretical properties of the estimator and show the importance of machine learning over conventional regression approaches to fitting the nuisance parameters. We also derive the bias and variance of the estimator, the orders of which are analogous to a kernel density estimator. This estimator opens up the possibility of developing methodology for optimal choice of the kernel and bandwidth to form confidence bounds for the CDF itself. 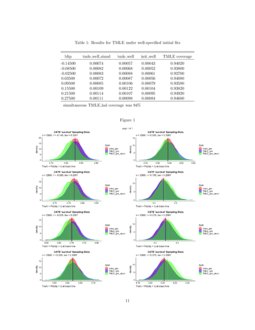 This paper analyzes the effect of a discrete treatment Z on a duration T...
Jad Beyhum, et al. ∙

The stratum-specific treatment effect or blip gillrobins2001 function is defined as random variable given by the average treatment effect for a randomly drawn stratum of confounders. Estimating the cumulative distribution function or CDF of the blip function therefore estimates the proportion of the population that has an average treatment effect at or below a given level. Because clinicians treat patients based on confounders, such is of interest as to evaluating treatment. However, we will see the blip CDF is not pathwise differentiable so we need to estimate a kernel-smoothed version, which can be of interest in and of itself. Such might also provide a pathway to forming confidence intervals for the blip CDF.

Much consideration has been given to the distribution of Y1−Y0, where Ya is the counterfactual outcome under the intervention to set treatment to a, as per the neyman-rubin potential outcomes framework neyman1923, rubin1974. Neyman, 1923, realized that even in estimating the mean of Y1−Y0, the impossibility of identifying the correlation of Y1,Y0

Y1 and Y0 are hard to verify. Cox, 1958 assumes a constant treatment effect for pre-defined subgroups, while Fisher, 1951 suggests one can essentially view the counterfactual Y1−Y0

by careful design. Heckman and Smith, 1998 estimate the quantiles of

Y1−Y0 via the assumption of quantiles being preserved from Y1 to Y0 given a strata of confounders. Without strong assumptions, using tail bounds frechet1951 to estimate the quantiles of Y1−Y0 via the marginals of Y1 and Y0 tends to leave too big of a measure of uncertainty to be useful heckman. Heckman also mentions that his analysis becomes much easier if Y1−Y0 remains fixed for a given stratum, i.e., Y1−Y0=E[Y1−Y0∣W], for which we aim to estimate the CDF.

Our full data, including unobserved measures, is assumed to be generated according to the following structural equations Wright, Strotz, Pearl:2000aa. We can assume a joint distribution, U=(UW,UA,UY)∼PU, an unknown distribution of unmeasured variables. X=(W,A,Y) are the measured variables. In the time ordering of occurrence we have W=fW(UW) where W

is a vector of confounders,

A=fA(UA,W), where A is a binary treatment and Y=fY(UY,W,A), where Y is the outcome, either binary or bounded continuous. We thusly define a distribution PU,X, via (U,X)∼PU,X.

is considered a semi-parametric model and we will incorporate such knowledge.

3 Parameter of Interest and Identification

First we define the potential outcome under the intervention to set the treatment to a as neyman1923 Ya=fY(UY,a,W). The blip function is then defined as bPUX(W)=EPUX[Y1|W]−EPUX[Y0|W]. Our parameter of interest is a mapping from MF to R2 defined by ΨF(PUX)=EPUXI(bPUX(W)≤t) or the CDF of the blip.

We will impose the randomization assumption Robins1986, Greenland1986, Ya⊥A|W as well as positivity, 0<EP[A=a∣W]<1 for all a and W. Defining bP(W)=EP[Y|A=1,W]−EP[Y|A=0,W] yields bPUX(W)=bP(W) and we can identify the parameter of interest as a mapping from the observed data model, M, to Rd via the

Ψ is not pathwise differentiable Vaart:2000aa so instead we consider the smoothed version of the parameter mapping, using kernel, k, with bandwidth, δ. Here we will suppress k in the notation for convenience:

NOTE: We assume throughout this paper, Pr(b(W)=x)=0 for all values, x. In other words, our blip distribution function is continuous.

4 Derivation of the Efficient Influence Curve of Ψδ,t(P)

The true data generating distribution, P, has density, p, which can be factorized as p(o)=pY(y|a,w)g(a|w)pW(w). We consider the one dimensional set of submodels that pass through P at ϵ=0 Vaart:2000aa {Pϵ s.t. pϵ=(1+ϵS)p|∫SdP=0,∫S2dP<∞}. The tangent space is the closure in L2 norm of the set of scores, S, or directions for the paths defined above. We write:

For a non-parametric model,

The efficient influence curve at a distribution, P, for the parameter mapping, Ψδ,t, is a function of the observed data, O∼P, notated as D⋆Ψδ,t(P)(O). Its variance gives the generalized Cramer-Rao lower bound for the variance of any regular asymptotically linear estimator of Ψδ,t Vaart:2000aa. For convenience we define the outcome model ¯Q(A,W)=EP[Y∣A,W] and the treatment mechanism as g(A∣W)=EP[A∣W]. We will simplify the notation for the blip here as well, leaving off the subscript for the distribution so that b(W)=EP[Y∣1,W]−EP[Y∣0,W]. As in van der Vaart, 2000, we define the pathwise derivative at P along score, S, as

We note to the reader, we imply a direction, S, when we write Pe, which has density p(1+ϵS), but generally leave it off the notation as understood.

As a note to the reader: Our parameter mapping does not depend on the treatment mechanism, g, and also TA⊥TY⊕TW which, means our efficient influence curve must therefore be in TY⊕TW for the nonparametric model. Therefore, our efficient influence curve will have two orthogonal components in TY and TW respectively. We have no component in TA, which is why we need not perform a TMLE update of the initial prediction, gn, of g0(A|W). Such also teaches us that for the semi-parametric model, where the treatment mechanism is known, the efficient influence function will remain the same.

Assume k is lipschitz and smooth on R. The efficient influence curve for the parameter, Ψt,δ, is given by

Define Φ(x)=1/(1+exp(x)). We also define bϵ=EPϵ[Y∣A=1,W]−EPϵ[Y∣A=1,W], where Pϵ is defined via its density, pϵ=(1+ϵS(o))p(o), and p is the density of P. S is the so-called score function in Hilbert Space, L20(P), the completion (under the L2 norm) of the space of mean 0 functions of finite variance. We remind the reader that since our model is nonparametric, the tangent space is L20(P) Vaart:2000aa. We will now compute the pathwise derivative functional on L20(P), writing it as an inner product (covariance in the Hilbert Space L2(P)), of the score, S, and the efficient influence curve, a unique element of the tangent space, L20(P). We notate the efficient influence curve as indexed by the distribution, P, and as a function of the observed data, O∼P: D∗(P)(O). By dominated convergence we have

Let’s now drop limϵ→01ϵ for now and use integration by parts to compute a part of the integrand in (5):

We can summarize as follows:

As previously stated, the second term disappears by easy choice of h.

We then compute the pathwise derivative along S at ϵ=0:

Thus we finally get:

And this is the efficient influence curve since the canonical gradient is the only gradient for a non-parametric model where the closure of the set of scores is all of L20(P).

We will employ the notation, Pnf(O) to be the empirical average of function, f(⋅), and Pf(O) to be EPf(O)

To perform the TMLE updating procedure, we may find an element of either a universal least favorable submodel (ulfm), a least favorable submodel (lfm), both defined in van der Laan and Gruber, 2016, or a canonical least favorable submodel clfm. Both clfm and ulfm use a single dimensional submodel where as the lfm is of dimension, d, and identical to a clfm if d=1. The ulfm has the advantage of not relying on iteration as explained in van der Laan and Gruber, 2016, but here we did not notice an appreciable difference in performance so we used the faster clfm procedure. To construct a clfm, ulfm or lfm, one needs to know the efficient influence curve, which is given by

where we estimate the CDF of blip at a given blip value, t, using kernel, k, and bandwidth δ blipCDFtech. The CV-TMLE algorithm by the author cvtmle simplifies the originally formulated CV-TMLE algorithm by Zheng and van der Laan, 2010 and, in this case, turns out to be the same estimator if we use a pooled regression to fit the fluctuation parameter. The TMLE updating procedure is implemented in the software packages blipCDF blipCDF and tmle3. Here we will provide for readers more familiar with TMLE, only the so-called clever covariate Laan:2006aa for Ψh,t, but the reader may consult Levy, 2018c for a detailed algorithm.

If we are simultaneously estimating d points, t1,t2,...,td on the CDF curve, we will have a d−dimensional clever covariate:

The TMLE procedure yields ¯Q∗n(A,W) and our estimator is then a plug-in, using the empirical distribution, QW,n:

where b∗n(Wi)=¯Q∗n(1,W)−¯Q∗n(0,W), the blip function estimate. For simultaneously estimating many points on the CDF of the blip, the TMLE procedure yields a common outcome model for all t-values, t1,t2,...,td, which has the advantage of preserving monotonicity.

By solving the efficient influence curve equation with our TMLE update, we can then write a second order expansion, Ψδ(P⋆n)−Ψδ(P0)=(Pn−P0)D⋆Ψδ(P⋆n)+R2(P⋆n,P0). We then arrive at the following three conditions (for fixed bandwidth, δ) that guarantee asymptotic efficiency for this estimator Laan:2006aa, Laan:2011aa, the first of which is not required for CV-TMLE Zheng:2010aa. Thus CV-TMLE is our preferred estimator, since it requires less conditions on our machine learning, enabling a more aggressive approach to fitting the treatment mechanism and the outcome model.

We refer the reader to Targeted Learning Appendix Laan:2011aa as well as Laan:2015aa,Laan:2015ab, Laan:2006aa for a more detailed look at the theory of TMLE. For convenience, we will summarize some of the main results for the reader.

Under the above conditions, these confidence bands will be as small as possible for any regular asymptotically linear estimator at significance level, 1−α, where Pr(|Z|≤zα)=α for Z standard normal and ˆσn(D⋆j(P⋆n))

is the sample standard deviation of

{D⋆j(P⋆n)(Oi)∣i∈1:n} Laan:2006aa. Note, that if the TMLE conditions hold for the initial estimate, P0n, then they will also hold for the updated model, P⋆n Laan:2015aa, thereby placing importance on our ensemble machine learning in constructing P0n. For simultaneous confidence intervals, we refer the reader to Levy, van der Laan et al., 2018, for the method which leverages the efficient influence curve approximation to form confidence bounds that simultaneously cover the parameter values at a given significance level. Such inference is as tight as possible and certainly tighter than a standard bonferroni correction bonferroni.

7 The Remainder Term for a TMLE Plug-in Estimator of Ψδ,t(P0)

We can divide the W space into disjoint parts and integrate:

Assuming F0 is lipschitz, we have as follows: