Approximating kernel functions with random features (RFs)has been a successful application of random projections for nonparametric estimation. However, performing random projections presents computational challenges for large-scale problems. Recently, a new optical hardware called Optical Processing Unit (OPU) has been developed for fast and energy-efficient computation of large-scale RFs in the analog domain. More specifically, the OPU performs the multiplication of input vectors by a large random matrix with complex-valued i.i.d. Gaussian entries, followed by the application of an element-wise squared absolute value operation - this last nonlinearity being intrinsic to the sensing process. In this paper, we show that this operation results in a dot-product kernel that has connections to the polynomial kernel, and we extend this computation to arbitrary powers of the feature map. Experiments demonstrate that the OPU kernel and its RF approximation achieve competitive performance in applications using kernel ridge regression and transfer learning for image classification. Crucially, thanks to the use of the OPU, these results are obtained with time and energy savings. 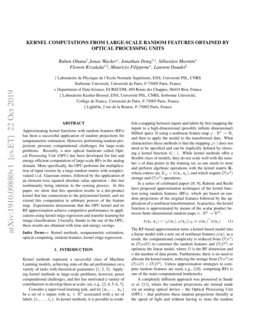 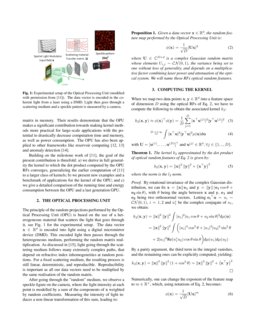 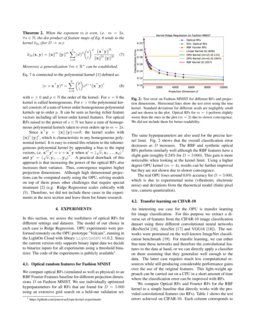 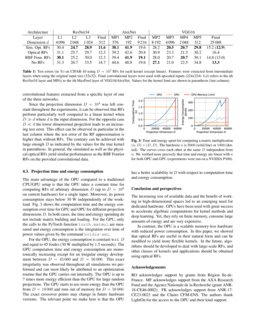 [1, 2, 3]. Applying kernel methods to large-scale problems, however, poses computational challenges, and this has motivated a variety of contributions to develop them at scale; see, e.g., [2, 4, 5, 6, 7].

{x1,…,xn} be a set of n inputs with xi∈Rd associated with a set of labels {t1,…,tn}. In kernel methods, it is possible to establish a mapping between inputs and labels by first mapping the inputs to a high-dimensional (possibly infinite dimensional) Hilbert space H using a nonlinear feature map φ:Rd→H, and then to apply the model to the transformed data. What characterizes these methods is that the mapping φ(⋅) does not need to be specified and can be implicitly defined by choosing a kernel function k(⋅,⋅). While kernel methods offer a flexible class of models, they do not scale well with the number n of data points in the training set, as one needs to store and perform algebraic operations with the kernel matrix K, whose entries are Kij=k(xi,xj), and which require O(n2) storage and O(n3) operations.

In a series of celebrated papers [8, 9], Rahimi and Recht have proposed approximation techniques of the kernel function using random features (RFs), which are based on random projections of the original features followed by the application of a nonlinear transformation. In practice, the kernel function is approximated by means of the scalar product between finite-dimensional random maps ϕ:Rd→RD:

The RF-based approximation turns a kernel-based model into a linear model with a new set of nonlinear features ϕ(x); as a result, the computational complexity is reduced from O(n3) to O(ndD) to construct the random features and O(D3) to optimize the linear model, where D is the RF dimension and n the number of data points. Furthermore, there is no need to allocate the kernel matrix, reducing the storage from O(n2) to O(nD)+O(D2). Unless approximation strategies to compute random features are used, e.g., [10], computing RFs is one of the main computational bottlenecks.

A completely different approach was pioneered in Saade et al. [11], where the random projections are instead made via an analog optical device – the Optical Processing Unit (OPU) – that performs these random projections literally at the speed of light and without having to store the random matrix in memory. Their results demonstrate that the OPU makes a significant contribution towards making kernel methods more practical for large-scale applications with the potential to drastically decrease computation time and memory, as well as power consumption. The OPU has also been applied to other frameworks like reservoir computing [12, 13]

Building on the milestone work of [11], the goal of the present contribution is threefold: a) we derive in full generality the kernel to which the dot product computed by the OPU RFs converges, generalizing the earlier computation of [11] to a larger class of kernels; b) we present new examples and a benchmark of applications for the kernel of the OPU; and c) we give a detailed comparison of the running time and energy consumption between the OPU and a last generation GPU.

The principle of the random projections performed by the Optical Processing Unit (OPU) is based on the use of a heterogeneous material that scatters the light that goes through it, see Fig. 1 for the experimental setup. The data vector x∈Rd is encoded into light using a digital micromirror device (DMD). This encoded light then passes through the heterogeneous medium, performing the random matrix multiplication. As discussed in [15], light going through the scattering medium follows many extremely complex paths, that depend on refractive index inhomogeneities at random positions. For a fixed scattering medium, the resulting process is still linear, deterministic, and reproducible. Reproducibility is important as all our data vectors need to be multiplied by the same realisation of the random matrix.

After going through the ”random” medium, we observe a speckle figure on the camera, where the light intensity at each point is modelled by a sum of the components of x

weighted by random coefficients. Measuring the intensity of light induces a non-linear transformation of this sum, leading to:

Given a data vector x∈Rd, the random feature map performed by the Optical Processing Unit is:

where U∈CD×d is a complex Gaussian random matrix whose elements Ui,j∼CN(0,1)

, the variance being set to one without loss of generality, and depends on a multiplicative factor combining laser power and attenuation of the optical system. We will name these RFs optical random features.

When we map two data points x,y∈Rd into a feature space of dimension D using the optical RFs of Eq. 2, we have to compute the following to obtain the associated kernel k2:

The kernel k2 approximated by the dot product of optical random features of Eq. 2 is given by:

where the norm is the l2 norm.

By rotational invariance of the complex Gaussian distribution, we can fix

By a parity argument, the third term in the integral vanishes, and the remaining ones can be explicitly computed, yielding:

Numerically, one can change the exponent of the feature map to m∈R+, which, using notations of Eq. 2, becomes:

Moreover, a generalization ∀m∈R+ can be established.

Eq. 7 is connected to the polynomial kernel [1] defined as:

Since x⊤y=∥x∥∥y∥cosθ, the kernel scales with ∥x∥i∥y∥i, which is characteristic to any homogeneous polynomial kernel. It is easy to extend this relation to the inhomogeneous polynomial kernel by appending a bias to the input vectors, i.e. x′⊤y′=ν+x⊤y when x′=(√ν,x1,...,xd)⊤ and y′=(√ν,y1,...,yd)⊤. A practical drawback of this approach is that increasing the power of the optical RFs also increases their variance. Thus, convergence requires higher projection dimensions. Although high dimensional projections can be computed easily using the OPU, solving models on top of them poses other challenges that require special treatment [2] (e.g. Ridge Regression scales cubically with D). Therefore, we did not include these cases in the experiments in the next section and leave them for future research.

In this section, we assess the usefulness of optical RFs for different settings and datasets. The model of our choice in each case is Ridge Regression. OPU experiments were performed remotely on the OPU prototype ”Vulcain”, running in the LightOn Cloud with library LightOnOPU

v1.0.2. Since the current version only supports binary input data we decide to binarize inputs for all experiments using a threshold binarizer. The code of the experiments is publicly available

on Fashion MNIST. We use individually optimized hyperparameters for all RFs that are found for

D=5000 using an extensive grid search on a held-out validation set. The same hyperparameters are also used for the precise kernel limit. Fig. 2 shows that the overall classification error decreases as D increases. The RBF and synthetic optical RFs perform similarly well although the RBF features have a slight gain (roughly 0.24% for D=5000). This gain is more noticeable when looking at the kernel limit. Using a higher degree OPU kernel (m=4), results can be further improved but they are not shown due to slower convergence.

The real OPU loses around 0.6% accuracy for D=5000, which is due to experimental noise (vibrations, electronic noise) and deviations from the theoretical model (finite pixel size, camera quantization).

). The networks were pretrained on the well-known ImageNet classification benchmark

. For transfer learning, we can either fine-tune these networks and therefore the convolutional features to the data at hand, or we can directly apply a classifier on them assuming that they generalize well enough to the data. The latter case requires much less computational resources while still producing considerable performance gains over the use of the original features. This light-weight approach can be carried out on a CPU in a short amount of time where the classification error can be improved with RFs.

We compare Optical RFs and Fourier RFs for the RBF kernel to a simple baseline that directly works with the provided convolutional features (no RFs). Table 1

shows the test errors achieved on CIFAR-10. Each column corresponds to convolutional features extracted from a specific layer of one of the three networks.

Since the projection dimension D=104 was left constant throughout the experiments, it can be observed that RFs perform particularly well compared to a linear kernel when D≫d where d is the input dimension. For the opposite case D≪d the lower dimensional projection leads to an increasing test error. This effect can be observed in particular in the last column where the test error of the RF approximation is higher than without RFs. The contrary can be achieved with large enough D as indicated by the values for the true kernel in parenthesis. In general, the simulated as well as the physical optical RFs yield similar performances as the RBF Fourier RFs on the provided convolutional data.

The main advantage of the OPU compared to a traditional CPU/GPU setup is that the OPU takes a constant time for computing RFs of arbitrary dimension D (up to D=106 on current hardware) for a single input. Moreover, its power consumption stays below 30 W independently of the workload. Fig. 3 shows the computation time and the energy consumption over time for GPU and OPU for different projection dimensions D

. In both cases, the time and energy spending do not include matrix building and loading. For the GPU, only the calls to the PyTorch function

torch.matmul are measured and energy consumption is the integration over time of power values given by the command nvidia-smi.

For the OPU, the energy consumption is constant w.r.t. D and equal to 45 Joules (30 W multiplied by 1.5 seconds). The GPU computation time and energy consumption are monotonically increasing except for an irregular energy development between D=45000 and D=56000. This exact irregularity was observed throughout all simulations we performed and can most likely be attributed to an optimization routine that the GPU carries out internally. The OPU is up to 7 times more energy efficient than the GPU for large random projections. The GPU starts to use more energy than the OPU from D=18000 and runs out of memory for D=58000. The exact crossover points may change in future hardware versions. The relevant point we make here is that the OPU has a better scalability in D with respect to computation time and energy consumption.

The increasing size of available data and the benefit of working in high-dimensional spaces led to an emerging need for dedicated hardware. GPUs have been used with great success to accelerate algebraic computations for kernel methods and deep learning. Yet, they rely on finite memory, consume large amounts of energy and are very expensive.

In contrast, the OPU is a scalable memory-less hardware with reduced power consumption. In this paper, we showed that optical RFs are useful in their natural form and can be modified to yield more flexible kernels. In the future, algorithms should be developed to deal with large-scale RFs, and other classes of kernels and applications should be obtained using optical RFs.