This paper concerns Kalman filtering when the measurements of the process are censored. The censored measurements are addressed by the Tobit model of Type I and are one-dimensional with two censoring limits, while the (hidden) state vectors are multidimensional. For this model, Bayesian estimates for the state vectors are provided through a recursive algorithm of Kalman filtering type. Experiments are presented to illustrate the effectiveness and applicability of the algorithm. The experiments show that the proposed method outperforms other filtering methodologies in minimizing the computational cost as well as the overall Root Mean Square Error (RMSE) for synthetic and real data sets. 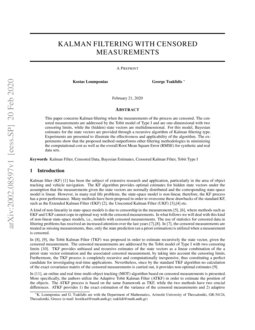 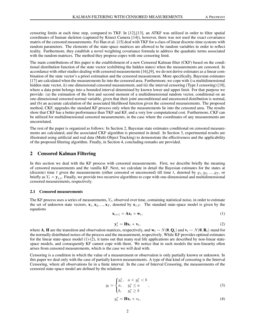 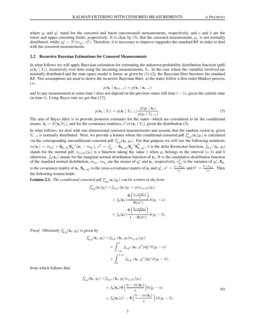 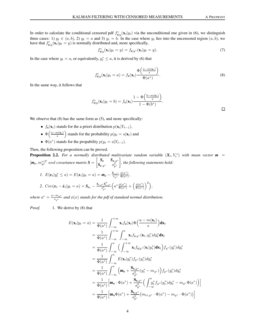 has been the subject of extensive research and application, particularly in the area of object tracking and vehicle navigation. The KF algorithm provides optimal estimates for hidden state vectors under the assumption that the measurements given the state vectors are normally distributed and the corresponding state-space model is linear. However, in many real life problems, the state-space model is non-linear, therefore, the KF process has a poor performance. Many methods have been proposed in order to overcome these drawbacks of the standard KF, such as the Extended Kalman Filter (EKF)

, an online and real time multi-object tracking (MOT) algorithm based on censored measurements is presented. More specifically, the authors utilize the Adaptive Tobit Kalman Filter (ATKF) in order to estimate the position of the objects. The ATKF process is based on the same framework as TKF, while the two methods have two crucial differences. ATKF provides 1) the exact estimation of the variance of the censored measurements and 2) adaptive censoring limits at each time step, compared to TKF. In

[12],[13], an ATKF was utilized in order to filter spatial coordinates of human skeleton (captured by Kinect Camera [14]), however, there was not used the exact covariance matrix of the censored measurements. Fei Han et al. [15]

deal with TKF for a class of linear discrete-time systems with random parameters. The elements of the state-space matrices are allowed to be random variables in order to reflect reality. Furthermore, they establish a novel weighting covariance formula to address the quadratic terms associated with the random matrices. The method they propose copes with one censoring limit.

, where a data point belongs into a bounded interval determined by known lower and upper limit. For that purpose we provide: (a) the estimation of the first and second moment of a multidimensional random vector, conditional on an one-dimensional censored normal variable, given that their joint unconditional and uncensored distribution is normal, and (b) an accurate calculation of the associated likelihood function given the censored measurements. The proposed method, CKF, upgrades the standard KF process only when the measurements lie into the censored area. The results show that CKF has a better performance than TKF and KF, and a very low computational cost. Furthermore, CKF can be utilized for multidimensional censored measurements, in the case where the coordinates of any measurements are uncorrelated.

The rest of the paper is organized as follows: In Section 2, Bayesian state estimates conditional on censored measurements are calculated, and the associated CKF algorithm is presented in detail. In Section 3, experimental results are illustrated using artificial and real data (Multi-Object Tracking) to demonstrate the effectiveness and the applicability of the proposed filtering algorithm. Finally, in Section 4, concluding remarks are provided.

The KF process uses a series of measurements, Yt, observed over time, containing statistical noise, in order to estimate the set of unknown state vectors, x1,x2,...,xT, denoted by x1:T. The standard state-space model is given by the equations

where A, H are the transition and observation matrices, respectively, and wt∼N(0,Qt) and vt∼N(0,Rt) stand for the normally distributed noises of the process and the measurement, respectively. While KF provides optimal estimates for the linear state-space model (1)-(2), it turns out that many real life applications are described by non-linear state-space models, and consequently KF cannot cope with them. We notice that in such models the non-linearity often arises from censored measurements, which is the case we will deal with.

p(xt∣Yt), recursively over time using the incoming measurements, Yt. In the case where the variables involved are normally distributed and the state-space model is linear, as given by (1)-(2), the Bayesian filter becomes the standard KF. Two assumptions are used to derive the recursive Bayesian filter: a) the states follow a first-order Markov process, i.e.,

and b) any measurement at some time t does not depend on the previous states (till time t−1), given the current state (at time t). Using Bayes rule we get that [17],

The aim of Bayes filter is to provide posterior estimates for the states -which are considered to be the conditional means- ^xt=E(xt|Yt), and for the covariance matrices, Cov(xt∣Yt), given the distribution (5).

In what follows, we deal with one-dimensional censored measurements and assume that the random vector xt given Yt−1 is normally distributed. Next, we provide a lemma where the conditional censored pdf fcx|y(xt|yt) is calculated via the corresponding unconditional censored pdf fcx,y(xt,yt). For that purpose we will use the following notations: m(xt)=my∗t+Sxt,y∗tS% −1xt(xt−mxt), s2=s2y∗t−Sxt,y∗tS−1xtSTxt,y∗t, δ is the delta Kronecker function, fx,y∗(xt,yt) stands for the normal pdf, u(a,b)(yt) is a function taking the value 1 when yt belongs to the interval (a,b) and 0 otherwise, fx(xt) stands for the marginal normal distribution function of xt, Φ

Obviously fcx,y(xt,yt) is given by

from which follows that

In order to calculate the conditional censored pdf fcx|y(xt|yt) via the unconditional one given in (6), we distinguish three cases: 1) yt∈(a,b), 2) yt=a and 3) yt=b. In the case where yt lies into the uncensored region (a,b), we have that fcx|y(xt|yt=y) is normally distributed and, more specifically,

In the case where yt=a, or equivalently, y∗t≤a, it is derived by (6) that

In the same way, it follows that

We observe that (8) has the same form as (5), and more specifically:

Then, the following proposition can be proved.

where a∗=a−my∗sy∗ and ϕ(x) stands for the pdf of standard normal distribution.

where mtr,y2∗ is the truncated second moment of y∗ in the interval (−∞,a) [19] and is given by

In the same way as presented in Proposition 2.2, it can be proved that:

We notice that the random vector (xt|yt=a) is not normally distributed; nevertheless, the normality could be accepted for various values of the censoring limit a and covariance matrix, Sx,y∗. More precisely, this normality condition can be accepted if the value of a is high enough while the correlation coefficient rx,y is low. To illustrate this statement, we consider the following example.

H0: (X|y=a)∼N(μ,σ2) cannot be rejected, while for very high values of rx,y the null hypothesis has to be rejected. Thus, for our example, if rxi,y≤0.75 , we can accept that the distribution function f(x|y=a) be approximated by a normal distribution with mean vector (11) and covariance matrix (15). We can get analogous results for the pdf f(x|y=b).

The standard KF process consists of two stages: a) the predict stage and b) the update stage. In the predict stage only the last state vector estimation is used, ^xt−1, in order to calculate the a priori estimation, ^x−t by (1). The state vector at time t−1 given the measurements up to time t−1, xt−1|Yt−1, is normally distributed, and then by (1), it is clear that xt|Yt−1 is normally distributed. In the censored KF process described by (3)-(4), xt−1|Yt−1 is not normally distributed (see Lemma 2.1) when the last measurement, yt−1, belongs into the uncensored area; nevertheless, as can be seen in Table 1, if the value of the corelation coefficient rxi,y is not high, it can be accepted that fcx|y(xt−1|yt−1=a) is (approximately) normal. Therefore, as in the vanilla KF process, the a priori state estimation and the corresponding covariance matrix of the error of the a priori estimation, P−t, are given by

At the next step the latent measurement, y∗t, is used in order to update ^xt−1. In the case that y∗t belongs into the uncensored region (a,b), we have that xt|Yt is normally distributed (see (7)). Therefore, the a posteriori estimation, ^xt, and the corresponding error covariance matrix, Pt, can be calculated by the standard KF process in optimal way (i.e., unbiased and minimum variance estimation are provided). Thus, the KF algorithm has to be updated for the case where the measurements are censored; to that end, we utilize Propositions 2.2 and 2.3.

In the same way, when yt=b, it is derived that,

The likelihood function of the censored normal distribution is given by