It is well known that the learning rate is the most important hyper-parameter on Deep Learning. Usually used learning rate schedule training neural networks. This paper puts forward a new method for learning rate schedule, named k-decay, which suitable for any derivable function to derived a new schedule function. On the new function control degree of decay by the new hyper-parameter k, while the original function is the special case at k = 1. This paper applied k-decay to polynomial function, cosine function and exponential function gives them the new function. In the paper, evaluate the k-decay method by the new polynomial function on CIFAR-10 and CIFAR-100 datasets with different neural networks (ResNet, Wide ResNet and DenseNet), the results improvements over the state-of-the-art results on most of them. Our experiments show that the performance of the model improves with the increase of k from 1. 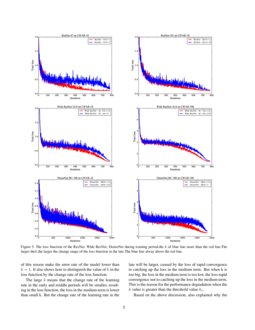 [devlin2018pretraining] and graph neural networks for graph [wu2019comprehensive, kipf2016semisupervised]. In these fields, deep neural networks have obtained unprecedented success, but it is far from enough. With the rapid development of technology, our model becomes more and more complex, need to consume more computer resources.So less computing resources obtain better models is our research purpose. on the one hand, develop an efficient neural network. For example, the architecture of the convolutional neural networks from VGG [simonyan2014convolutional] to resnet [he2016deep], from resnet to DenseNet [inproceedings] , its performance is improved and the calculation is less. on the other hand, find out an efficient optimization training neural networks. For example, replace the SGD with Momentum training higher performance model at the same time.

In deep neural networks update the parameters used by gradient descent algorithms. The formulated is

which w is the parameters, η is the learning rate, L

is the loss function. The

In Figure 1, the test error rate curve is used the polynomial decay function of different exponents as the learning rate schedule to training ResNet-20 (⎡⎢⎣1×1,643×3,641×1,256⎤⎥⎦) on CIFAR10 dataset. With the increase of N

, the change rate of the errors decreases in the late(the epoch at 180~200). The reason was that with the increase of

which k at 1,2,3,4,..n. The Δf(k,t) is the increment of Lk(t).It can be control and change the change rate of L(t) in the k-order. Solve the primitive function of Lk(t)′ as the new function L(t)′ for the learning rate schedule. You can see that the number of new functions at least k.

In Figure 2, shown test errors on CIFAR10 with ResNet-20 ([3×3,643×3,64]), used the new polynomial function based on k-decay, the errors decreases with the increase of k. The change rate of the errors increases with the increase of k in the late on the error curve, caused by the change rate of the learning rate increase with k on the new function in the late. The original function is the special case at k=1. It is proved that the change of the learning rate schedule based on the k-decay method be correct.

In recent years, find many studied optimization based on learning rate. On the one hand, used the better function of the learning rate schedule to role the global learning rate change with time in the optimal algorithm. For example, common use piecewise functions, polynomial function, stochastic gradient descent with restarts(SGDR)

[loshchilov2016sgdr], Cyclical Learning Rates(CLR) [conf/wacv/Smith17] , Hyperbolic-Tangent Decay(HTD) [conf/wacv/HsuehLW19] and so on. The SGDR used the cosine function combined with periodic function to improve the rate of convergence in accelerated gradient schemes. The CLR is also a periodic function, but its simple just between the maximum and minimum, and the maximum and minimum determination by "LR range test".The HTD just used the tanh function structure a new learning rate schedule. These schemes can improve good performance. And the difference with the k-decay method is that k-decay is a mathematical method, for any derivative function can be used,has wide applicability. Then the new function is still continuous, which mean no other parameters need to be set.

On the other hand, change initialization parameters based on the history of the gradient. For example, some adaptive learning rates algorithm:RMSprob [ruder2016overview], AdaDelta [journals/corr/abs-1212-5701], Adam [kingma2014adam]. These methods improve the stochastic gradient descent based on the momentum. It can be acceleration convergence and reduce the step of the learning rate. But it’s not a contradiction with learning rate schedule, they can be used together.

The polynomial decay function is

For convenience and consider the boundary conditions to let be ak−1=0,...,a2=0:

Now only need to find three parameters ak,a1 and a0.

Solution the k order of the equation 6:

That is constant but change with k. This function can be as a special solutions of the equation 6. Form a=k!ak=fk(t) to

Because the −tkTk is monotone decreasing function, used the −tkTk replace −tT.

The new exponential function is

The experiments evaluate our method by the new polynomial function9 on CIFAR-10 and CIFAR-100 datasets with different deep neural network architecture(ResNet [he2016deep] [he2016identity], Wide ResNet [zagoruyko2016wide] and DenseNet [inproceedings] ).Implementations of this model is the same as the original paper, except the learning rate schedule that using the new polynomial function(N=1) based on k-decay. And the value of the k at intervals of 0.5 form 1.The L0 is 0.1, Le is 0.001.

The k impact on performance. Figure 4 shown relation between error rate and the k value on different depths residual neural networks (ResNet-47, ResNet-101).Find that k begin with 1, the accuracy of the model increase. However, when k greater than threshold value kv , its performance will decrease.In ResNet-101, when k is greater than 4, The accuracy is smaller than before, but it is still better than k=1, the kv should be 4; in ResNet-47, the accuracy rate is very low when k>7, lower than k=1, the kv should be 7.

On the new polynomial decay function (N=1) of the k-decay has a certain range from k=1 to make the model the performance improved, and as k is greater than kv, this improvement will decrease or even disappear. The threshold is different for different models and different datasets, this requires some experience in the experiment.At the paper, recommended k value range was 1<k<3.

This paper proposed a new method adjustment the learning rate schedule for any derivable function based on their derivative of order k to production new function by k-decay. A case study of polynomial function used the k-decay method to derive a new function. And give the decay factor −tkTk based on k-decay. And introduce new hyper-parameter k to control the change rate of the learning rate in the new function. In the k-decay method, the k means that the derivative of order k, it change the change rate of the learning in k order and the change effect increase with the increase of k. The experiment shows the performance of the model also increases with the increase of k. This experiment k-decay method is effective. In the part of the discussion, discuss the k influences the performance and optimization process. In a way, it was also verified the performance of the model like loss, accuracy with the change rate of the learning rate. This is the basic reason for the k-decay method of success. You can see that there are too many solutions on the function 2 , only find a special solution for polynomial function, but is a better solution for that?It should be more.Hope this research will enlighten you to work in this direction.

The polynomial function of the k-decay to tensorflow and python