In the current work, we present a description of the system submitted to WMT 2018 News Translation Shared task. The system was created to translate news text from Finnish to English. The system used a Character Based Neural Machine Translation model to accomplish the given task. The current paper documents the preprocessing steps, the description of the submitted system and the results produced using the same. Our system garnered a BLEU score of 12.9. 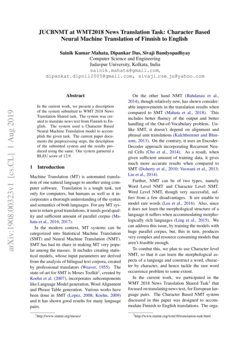 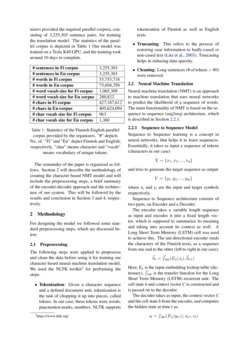 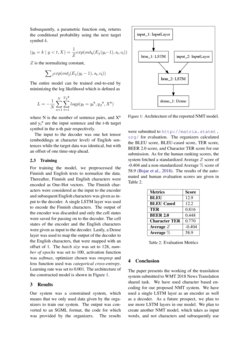 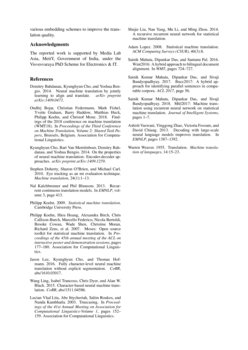 JUMT at WMT2019 News Translation Task: A Hybrid approach to Machine Translation for Lithuanian to English

In the current work, we present a description of the system submitted to...
Sainik Kumar Mahata, et al. ∙

In the current work, we explore the enrichment in the machine translatio...
Sainik Kumar Mahata, et al. ∙

We propose a system for contrapuntal music generation based on a Neural ...
Eric P. Nichols, et al. ∙

Machine Translation (MT) is automated translation of one natural language to another using computer software. Translation is a tough task, not only for computers, but humans as well as it incorporates a thorough understanding of the syntax and semantics of both languages. For any MT system to return good translations, it needs good quality and sufficient amount of parallel corpus Mahata et al. (2016, 2017).

In the modern context, MT systems can be categorized into Statistical Machine Translation (SMT) and Neural Machine Translation (NMT). SMT has had its share in making MT very popular among the masses. It includes creating statistical models, whose input parameters are derived from the analysis of bilingual text corpora, created by professional translators Weaver (1955). The state-of-art for SMT is Moses Toolkit111http://www.statmt.org/moses/, created by Koehn et al. (2007), incorporates subcomponents like Language Model generation, Word Alignment and Phrase Table generation. Various works have been done in SMT Lopez (2008); Koehn (2009) and it has shown good results for many language pairs.

On the other hand NMT Bahdanau et al. (2014), though relatively new, has shown considerable improvements in the translation results when compared to SMT Mahata et al. (2018). This includes better fluency of the output and better handling of the Out-of-Vocabulary problem. Unlike SMT, it doesn’t depend on alignment and phrasal unit translations Kalchbrenner and Blunsom (2013). On the contrary, it uses an Encoder-Decoder approach incorporating Recurrent Neural Cells Cho et al. (2014). As a result, when given sufficient amount of training data, it gives much more accurate results when compared to SMT Doherty et al. (2010); Vaswani et al. (2013); Liu et al. (2014).

Further, NMT can be of two types, namely Word Level NMT and Character Level NMT. Word Level NMT, though very successful, suffers from a few disadvantages. It are unable to model rare words Lee et al. (2016). Also, since it does not learn the morphological structure of a language it suffers when accommodating morphologically rich languages Ling et al. (2015). We can address this issue, by training the models with huge parallel corpus, but, this in turn, produces very complex and resource consuming models that aren’t feasible enough.

To combat this, we plan to use Character level NMT, so that it can learn the morphological aspects of a language and construct a word, character by character, and hence tackle the rare word occurrence problem to some extent.

In the current work, we participated in the WMT 2018 News Translation Shared Task222http://www.statmt.org/wmt18/translation-task.html that focused on translating news text, for European language pairs. The Character Based NMT system discussed in this paper was designed to accommodate Finnish to English translations. The organizers provided the required parallel corpora, consisting of 3,255,303 sentence pairs, for training the translation model. The statistics of the parallel corpus is depicted in Table 1 Our model was trained on a Tesla K40 GPU, and the training took around 10 days to complete.

The remainder of the paper is organized as follows. Section 2 will describe the methodology of creating the character based NMT model and will include the preprocessing steps, a brief summary of the encoder-decoder approach and the architecture of our system. This will be followed by the results and conclusion in Section 3 and 4, respectively.

For designing the model we followed some standard preprocessing steps, which are discussed below.

The following steps were applied to preprocess and clean the data before using it for training our character based neural machine translation model. We used the NLTK toolkit333https://www.nltk.org/ for performing the steps.

Sequence to Sequence learning is a concept in neural networks, that helps it to learn sequences. Essentially, it takes as input a sequence of tokens (characters in our case)

and tries to generate the target sequence as output

where xi and yi are the input and target symbols respectively.

Sequence to Sequence architecture consists of two parts, an Encoder and a Decoder.

The encoder takes a variable length sequence as input and encodes it into a fixed length vector, which is supposed to summarize its meaning and taking into account its context as well. A Long Short Term Memory (LSTM) cell was used to achieve this. The uni-directional encoder reads the characters of the Finnish texts, as a sequence from one end to the other (left to right in our case),

Here, Ex is the input embedding lookup table (dictionary), →fenc is the transfer function for the Long Short Term Memory (LSTM) recurrent unit. The cell state h and context vector C is constructed and is passed on to the decoder.

The decoder takes as input, the context vector C and the cell state h from the encoder, and computes the hidden state at time t as,

returns the conditional probability using the next target symbol

Z is the normalizing constant,

where N is the number of sentence pairs, and Xn and ytn are the input sentence and the t-th target symbol in the n-th pair respectively.

The input to the decoder was one hot tensor (embeddings at character level) of English sentences while the target data was identical, but with an offset of one time-step ahead.

was set to 100, activation function was

and loss function used was

categorical cross-entropy. Learning rate was set to 0.001. The architecture of the constructed model is shown in Figure 1.

Our system was a constrained system, which means that we only used data given by the organizers to train our system. The output was converted to an SGML format, the code for which was provided by the organizers. The results were submitted to http://matrix.statmt.org/ for evaluation. The organizers calculated the BLEU score, BLEU-cased score, TER score, BEER 2.0 score, and Character TER score for our submission. As for the human ranking scores, the system fetched a standardized Average Z score of -0.404 and a non-standardized Average % score of 58.9 Bojar et al. (2018). The results of the automated and human evaluation scores are given in Table 2.

The paper presents the working of the translation system submitted to WMT 2018 News Translation shared task. We have used character based encoding for our proposed NMT system. We have used a single LSTM layer as an encoder as well as a decoder. As a future prospect, we plan to use more LSTM layers in our model. We plan to create another NMT model, which takes as input words, and not characters and subsequently use various embedding schemes to improve the translation quality.

The reported work is supported by Media Lab Asia, MeitY, Government of India, under the Visvesvaraya PhD Scheme for Electronics & IT.