Journal ranking should depend on the level of aggregation

Journal ranking, that is, placing journals within their respective fields, is an important research evaluation tool. Several indices have been suggested for this purpose, typically on the basis of citation graph. We follow an axiomatic approach and find an impossibility theorem: any self-consistent ranking method, which satisfies a natural monotonicity property, should depend on the level of aggregation. Our result presents a trade-off between two axiomatic properties and reveals a dilemma of aggregation. 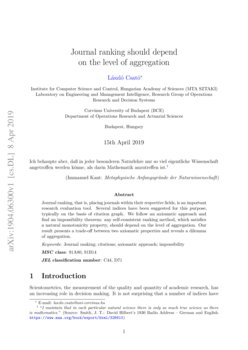 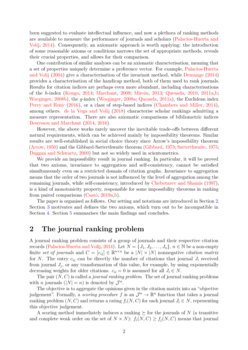 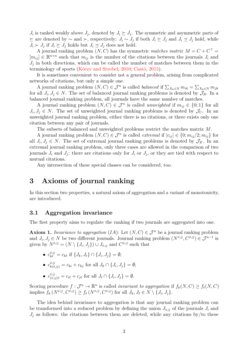 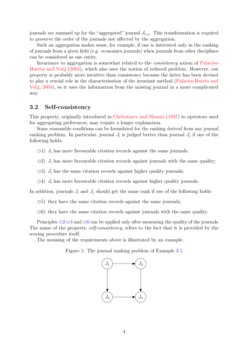 Disturbance of questionable publishing to academia

In this paper, we advocate the use of setwise contests for aggregating a...
Hugo Gilbert, et al. ∙

Despite the increasing use of citation-based metrics for research evalua...
Shuqi Xu, et al. ∙

Impact Factors and the Central Limit Theorem: Why Citation Averages Are Scale Dependent

Coping with the delineation of emerging fields: Nanoscience and Nanotechnology as a case study

Scientometrics, the measurement of the quality and quantity of academic research, plays an increasing role in the evaluation of researchers and research proposals. It is not surprising that a number of indices have been suggested to assess intellectual influence, and now a plethora of ranking methods are available to measure the performance of journals and scholars (Palacios-Huerta and Volij, 2014). Consequently, an axiomatic approach is worth applying: the introduction of some reasonable axioms or conditions narrows the set of appropriate methods, reveals their crucial properties, and allows for their comparison.

An important contribution of similar analyses can be an axiomatic characterisation, meaning that a set of properties uniquely determine a preference vector. For example,

Palacios-Huerta and Volij (2004) give a characterisation of the invariant method, while Demange (2014)

provides a characterisation of the handicap method, both of them used to rank journals. Results for citation indices are probably even more abundant, including characterisations of the

However, the above works seldom uncover the inevitable trade-offs between different natural requirements, which can be achieved mainly by impossibility theorems. Similar results are well-established in social choice theory since Arrow’s impossibility theorem (Arrow, 1950) and the Gibbard-Satterthwaite theorem (Gibbard, 1973; Satterthwaite, 1975; Duggan and Schwartz, 2000) but not so widely used in scientometrics.

We provide an impossibility result in journal ranking. In particular, it will be proved that two axioms, invariance to aggregation and self-consistency, cannot be satisfied simultaneously even on a substantially restricted domain of citation graphs. Invariance to aggregation means that the order of two journals is not influenced by the level of aggregation among the remaining journals, while self-consistency, introduced by Chebotarev and Shamis (1997), is a kind of monotonicity property, responsible for some impossibility theorems in ranking from paired comparisons (Csató, 2019a, b).

The paper is organised as follows. Our setting and notations are introduced in Section 2. Section 3 motivates and defines the two axioms, which turn out to be incompatible in Section 4. Section 5 summarises the main findings and concludes.

A journal ranking problem consists of a group of journals and their respective citation records (Palacios-Huerta and Volij, 2014). Let N={J1,J2,…,Jn}, n∈N be a non-empty finite set of journals and C=[cij]∈Rn×n be a |N|×|N| nonnegative citation matrix for N. The entry cij can be directly the number of citations that journal Ji received from journal Jj, or any transformation of this value, for example, by using exponentially decreasing weights for older citations. cii=0 is assumed for all Ji∈N.

The aim is to aggregate the opinions given in the citation matrix into an “objective judgement”. Formally, a scoring procedure f is a Jn→Rn function that takes a journal ranking problem (N,C) and returns a rating fi(N,C) for each journal Ji∈N, representing this objective judgement.

A scoring method immediately induces a ranking ⪰ for the journals of N (a transitive and complete weak order on the set of N×N): fi(N,C)≥fj(N,C) means that journal Ji is ranked weakly above Jj, denoted by Ji⪰Jj. The symmetric and asymmetric parts of ⪰ are denoted by ∼ and ≻, respectively: Ji∼Jj if both Ji⪰Jj and Ji⪯Jj hold, while Ji≻Jj if Ji⪰Jj holds but Ji⪯Jj does not hold.

A journal ranking problem (N,C) has the symmetric matches matrix M=C+C⊤=[mij]∈Rn×n such that mij is the number of the citations between the journals Ji and Jj in both directions, which can be called the number of matches between them in the terminology of sports (Kóczy and Strobel, 2010; Csató, 2015).

It is sometimes convenient to consider not a general problem, arising from complicated networks of citations, but only a simple one.

The subsets of balanced and unweighted problems restrict the matches matrix M.

Any intersection of these special classes can be considered, too.

In this section two properties, a natural axiom of aggregation and a variant of monotonicity, are introduced.

The first condition aims to regulate the ranking if two journals are aggregated into one.

The idea behind invariance to aggregation is that any journal ranking problem can be transformed into a reduced problem by defining the union Ji∪j of journals Ji and Jj as follows: all citations between them are deleted, while any citations by/to these journals are summed up for the “aggregated” journal Ji∪j. This transformation is required to preserve the order of the journals not affected by the aggregation.

Such an aggregation makes sense, for example, if one is interested only in the ranking of journals from a given field (e.g. economics journals) when journals from other disciplines can be considered as one entity.

Invariance to aggregation is somewhat related to the consistency axiom of Palacios-Huerta and Volij (2004), which also uses the notion of reduced problem. However, our property is probably more straightforward than consistency because the latter has been devised to play a crucial role in the characterisation of the invariant method (Palacios-Huerta and Volij, 2004), so it uses the information from the missing journal in a more complicated and unintuitive way.

This axiom, originally introduced in Chebotarev and Shamis (1997) to operators used for aggregating preferences, may require a longer explanation.

First, some reasonable conditions are formulated for the ranking derived from any journal ranking problem. In particular, journal Ji is judged better than journal Jj if one of the following holds:

In addition, journals Ji and Jj should get the same rank if one of the following holds:

Principles 2-4 and 2 can be applied only after measuring the quality of the journals. The name of the property, self-consistency, refers to the fact that it is provided by the scoring procedure itself.

The meaning of the requirements above is illustrated by an example.

This is shown in Figure 1 where a directed edge from node Ji to Jj indicates that journal Ji has received a citation from journal Jj.

Self-consistency has the following implications for the journal ranking problem presented in Example 3.1:

To conclude, self-consistency demands the ranking to be J1≻(J2∼J3)≻J4 in Example 3.1.

It is clear that self-consistency does not guarantee the uniqueness of the ranking in general (Csató, 2019a).

Now we turn to the mathematical formulation of this axiom.

Journals of the competitor set Si are called the competitors of Ji. Note that |Si|=|Sj| for all Ji,Jj∈N if and only if the ranking problem is balanced.

The sum of journal ranking problems has a number of reasonable interpretations. For instance, they can reflect the citations from different years, or by authors from different countries.

Finally, we are able to introduce conditions 1-2 with mathematical formulas.

In a nutshell, self-consistency implies that if journal Ji does not show worse performance than journal Jj on the basis of the citation matrix, then it is not ranked lower, in addition, it is ranked strictly higher when it becomes clearly better.

4 The incompatibility of the two axioms

In the following, it will be proved that no scoring procedure can meet axioms IA and SC.

Let (N,C)∈J4B∩J4U∩J4E and (N3∪4,C3∪4)∈J3B∪J3U∩J3E be the journal ranking problems with the citation matrices

Journal ranking problem (N3∪4,C3∪4) is obtained by uniting journals 3 and 4.

This is shown in Figure 2 where a directed edge from node Ji to Jj indicates that journal Ji has received a citation from journal Jj, and an undirected edge between the nodes means that the two journals are tied by mutual citations.

There exists no scoring procedure that is invariant to aggregation and self-consistent.

The contradiction of the two properties can be proved by Example 4.1. Take first the journal ranking problem (N,C), which has the competitor sets S1=S4={J2,J3} and S2=S3={J1,J4}. Assume for contradiction the existence of a scoring procedure f:Jn→Rn satisfying invariance to aggregation and self-consistency.

Self-consistency has several implications for the scoring procedure f as follows:

Since Example 4.1 contains balanced, unweighted, and extremal journal ranking problems, there is few hope to avoid the impossibility of Theorem 4.1 by plausible domain restrictions.

IA and SC are logically independent axioms because there exist scoring procedures that satisfy one of the two properties: the least squares method is self-consistent (Chebotarev and Shamis, 1998, Theorem 5), and the flat scoring procedure, which gives fi(N,C)=0 for all i∈N and (N,C)∈Jn, is invariant to aggregation.

We have shown an impossibility theorem in journal ranking: a reasonable method cannot be invariant to the aggregation of journals, even in the case of a substantially restricted domain of citation graphs. As a consequence, the choice of the set of journals to be compared is an important aspect of every empirical study which aims to measure intellectual influence.

It is clear that our axiomatic analysis has a number of limitations as it is able to consider indices from only one point of view (Glänzel and Moed, 2013). For example, the citation graph is assumed to be known, that is, the issue of choosing an adequate time window is neglected. In addition, this paper has not addressed several important problems of scientometrics such as the comparability of distant research areas, or the proper treatment of different types of publications.

Nevertheless, the derivation of similar impossibility results may contribute to a better understanding of the inevitable trade-offs between various properties, and it means a natural subject of further studies besides axiomatic characterisations.

We are grateful to György Molnár and Dóra Gréta Petróczy for inspiration.

The research was supported by OTKA grant K 111797 and by the MTA Premium Postdoctoral Research Program.