Recently, state-of-the-art results have been achieved in semantic segmentation using fully convolutional networks (FCNs). Most of these networks employ encoder-decoder style architecture similar to U-Net and are trained with images and the corresponding segmentation maps as a pixel-wise classification task. Such frameworks only exploit class information by using the ground truth segmentation maps. In this paper, we propose a multi-task learning framework with the main aim of exploiting structural and spatial information along with the class information. We modify the decoder part of the FCN to exploit class information and the structural information as well. We intend to do this while also keeping the parameters of the network as low as possible. We obtain the structural information using either of the two ways: i) using the contour map and ii) using the distance map, both of which can be obtained from ground truth segmentation maps with no additional annotation costs. We also explore different ways in which distance maps can be computed and study the effects of different distance maps on the segmentation performance. We also experiment extensively on two different medical image segmentation applications: i.e i) using color fundus images for optic disc and cup segmentation and ii) using endoscopic images for polyp segmentation. Through our experiments, we report results comparable to, and in some cases performing better than the current state-of-the-art architectures and with an order of 2x reduction in the number of parameters. 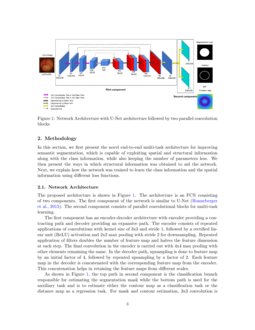 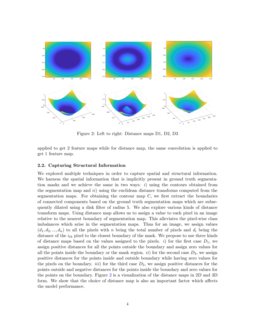 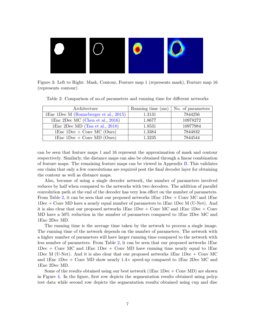 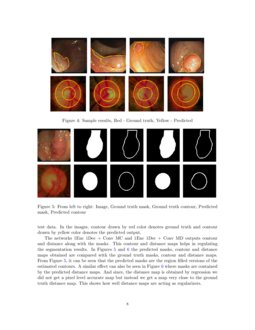 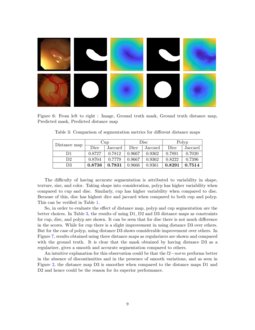 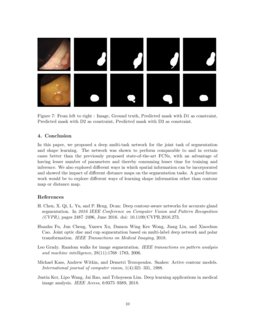 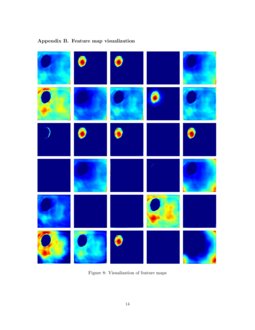 In this paper, we consider the problem of automatically segmenting neuro...
Jianxu Chen, et al. ∙

Image segmentation is the process of delineating regions of interest in an image, which is one of the primary tasks in medical imaging. Identifying these regions provides numerous applications in the medical domain. Some of the applications include: segmentation of glands in histology images which is an indicator of cancer severity, segmentation of optic cup and disc in retinal fundus images which is used in glaucoma screening, segmentation of lung nodules in chest computed tomography which aids physicians in differentiating malignant lesions from benign lesions, and segmentation of polyp in colonoscopy images which helps in diagnosing cancer in its early stages [Litjens et al.(2017)Litjens, Kooi, Bejnordi, Setio, Ciompi, Ghafoorian, van der Laak, van Ginneken, and Sánchez].

Traditional approaches in image segmentation include active contours [Kass et al.(1988)Kass, Witkin, and Terzopoulos], normalized cuts [Shi and Malik(2000)] and random walk [Grady(2006)]. Recently, fully convolutional networks (FCNs) such as U-Net [Ronneberger et al.(2015)Ronneberger, Fischer, and Brox] have been shown to be highly suitable for the task of semantic segmentation of medical images for almost all modalities [Ker et al.(2018)Ker, Wang, Rao, and Lim] and have been shown to achieve better results than the traditional methods. The current trend in the research using U-Net mainly revolves around two approaches: i) the first approach focuses on modifying the U-Net architecture by adding residual, dense and multi-scale blocks [Yu et al.(2017)Yu, Chen, Dou, Qin, and Heng, Shankaranarayana et al.(2017)Shankaranarayana, Ram, Mitra, and Sivaprakasam], ii)

the second approach focuses on modifying the loss functions by adding dice, jaccard coefficients to normal cross-entropy while fixing U-Net as the base network

. These approaches have provided a significant improvement in segmentation. However, medical images require segmentations to be of greater precision. One of the reasons for segmentation to be of poor precision is that the region of interests usually occupy a small area in medical images, resulting in severe foreground-background class imbalance, which leads to imprecise segmentation. Also, the network lacks the knowledge of an object’s shape because of spatial information being lost in encoder through max-pooling which results in irregular segmentation. Recently multiple works

[Sarker et al.(2018)Sarker, Rashwan, Akram, Banu, Saleh, Singh, Chowdhury, Abdulwahab, Romani, Radeva, and Puig, Yan et al.(2018)Yan, Yang, and Cheng], have addressed these issues. But such networks are not capable of explicitly learning the spatial information. To this end, we propose a novel architecture which is capable of learning both class and spatial information explicitly through a joint learning framework. There are two related works which are of our interest: 1) The network DCAN proposed by [Chen et al.(2016)Chen, Qi, Yu, and Heng] provided better segmentation results with help of contours. 2) The network proposed by [Tan et al.(2018)Tan, Zhao, Yan, Li, Metaxas, and Zhan] showed improvement over DCAN with the help of distance maps. Both these methods propose the use of FCNs with the architecture having single encoder block and two decoder blocks, where one of the decoders is dedicated for segmentation task and the other is dedicated for the auxiliary task. But the networks proposed have complicated architectures and have large number of parameters, leading to longer training time and inference time, while also requiring more compute resources.

In this paper, as the main contribution, we propose a minimalistic deep network for the task of joint shape learning and segmentation. The proposed architecture consists of significantly fewer parameters while maintaining the performance and in many cases even outperforming the previous methods. We also explore numerous ways in which the spatial information can be incorporated and study their effects on the performance. We conduct multiple experiments for two different kinds of medical images- for optic disc and cup segmentation from retinal color fundus images and polyp segmentation from endoscopic images and report state of the art results.

The proposed architecture is shown in Figure 1. The architecture is an FCN consisting of two components. The first component of the network is similar to U-Net [Ronneberger et al.(2015)Ronneberger, Fischer, and Brox]. The second component consists of parallel convolutional blocks for multi-task learning.

The first component has an encoder-decoder architecture with encoder providing a contracting path and decoder providing an expansive path. The encoder consists of repeated applications of convolutions with kernel size of 3x3 and stride 1, followed by a rectified linear unit (ReLU) activation and 2x2 max pooling with stride 2 for downsampling. Repeated application of filters doubles the number of feature map and halves the feature dimension at each step. The final convolution in the encoder is carried out with 4x4 max pooling with other elements remaining the same. In the decoder path, upsampling is done to feature map by an initial factor of 4, followed by repeated upsampling by a factor of 2. Each feature map in the decoder is concatenated with the corresponding feature map from the encoder. This concatenation helps in retaining the feature maps from different scales.

, the top path in second component is the classification branch responsible for estimating the segmentation mask while the bottom path is used for the auxiliary task and is to estimate either the contour map as a classification task or the distance map as a regression task. For mask and contour estimation, 3x3 convolution is applied to get 2 feature maps while for distance map, the same convolution is applied to get 1 feature map.

Lmask is from equation 2 and Ldistance denotes the pixel-wise mean square error. ^D(x) is the estimated distance map after sigmoid activation function while D(x) is the ground-truth.

We use ORIGA dataset [Zhang et al.(2010)Zhang, Yin, Liu, Wong, Tan, Lee, Cheng, and Wong] for the task of optic disc and cup segmentation. The dataset contains 650 color fundus images along with the pixelwise annotations for the optic disc and the cup. We obtain the final segmentation map by thresholding the output probabilities similar to the work in [Fu et al.(2018)Fu, Cheng, Xu, Wong, Liu, and Cao]. We then fit an ellipse on the segmentation outputs for both cup and disc. We also use Polyp segmentation dataset from MICCAI 2018 Gastrointestinal Image ANalysis (GIANA) [Vázquez et al.(2017)Vázquez, Bernal, Sánchez, Fernández-Esparrach, López, Romero, Drozdzal, and Courville] for evaluating the models because polyp has large variations in terms of shape. The dataset consists of 912 images with ground truth masks. The dataset is randomized and split into 70% for training and 30% for testing. The images are center-cropped to square dimensions and resized to 256×256 before usage.

The models are implemented in PyTorch

. Each model is trained for 150 epochs with Adam optimizer, with a learning rate to 1e-4 and batch size of 4. All experimentations are conducted with NVIDIA GeForce GTX 1060 with 6GB vRAM.

The metrics used for evaluating the performance of the network include Jaccard and Dice. The explanation of Jaccard and Dice can be found in Appendix A. Some denotations used in this section are Encoder (Enc), Decoder (Dec), Mask (M), Contour (C), Distance (D) and Parallel convolution block after U-Net (Conv). The results of the proposed networks (1Enc 1Dec + Conv MC and 1Enc 1Dec + Conv MD) are compared with the following combinations of networks and loss functions.

From Table 1 it can be seen that the network 1Enc 2Dec MC and 1Enc 1Dec + Conv MC have similar results for cup, disc and polyp segmentation. Likewise, the network 1Enc 2Dec MD and 1Enc 1Dec + Conv MD have nearly equal results for the cup, disc and polyp segmentation. This shows that having a single decoder with two convolution paths achieves equivalent results to the network with two parallel decoders. This observation indicates that a single decoder in itself is sufficient to reconstruct features of mask, contour and distance from the encoder representation. This reasoning can be supported by visualizing the 32 decoder feature maps obtained before parallel convolution blocks. From Figure 3, it can be seen that feature maps 1 and 16 represent the approximation of mask and contour respectively. Similarly, the distance maps can also be obtained through a linear combination of feature maps. The remaining feature maps can be viewed in Appendix B. This validates our claim that only a few convolutions are required post the final decoder layer for obtaining the contour as well as distance maps.

So, in order to evaluate the effect of distance map, polyp and cup segmentation are the better choices. In Table 3, the results of using D1, D2 and D3 distance maps as constraints for cup, disc, and polyp are shown. It can be seen that for disc there is not much difference in the scores. While for cup there is a slight improvement in using distance D3 over others. But for the case of polyp, using distance D3 shows considerable improvement over others. In Figure 7, results obtained using three distance maps as regularizers are shown and compared with the ground truth. It is clear that the mask obtained by having distance D3 as a regularizer, gives a smooth and accurate segmentation compared to others.

An intuitive explanation for this observation could be that the l2−norm performs better in the absence of discontinuities and in the presence of smooth variations, and as seen in Figure 2, the distance map D3 is smoother when compared to the distance maps D1 and D2 and hence could be the reason for its superior performance.

In this paper, we proposed a deep multi-task network for the joint task of segmentation and shape learning. The network was shown to perform comparable to and in certain cases better than the previously proposed state-of-the-art FCNs, with an advantage of having lesser number of parameters and thereby consuming lesser time for training and inference. We also explored different ways in which spatial information can be incorporated and showed the impact of different distance maps on the segmentation tasks. A good future work would be to explore different ways of learning shape information other than contour map or distance map.

where A corresponds to the output of the method and B to the actual ground truth. DICE similarity score is a statistic also used for comparing the similarity of two samples. It is calculated as follows:

where X and Y correspond, respectively, to the output of the method and the ground truth image.