Millimeter wave (mmWave) is an attractive candidate for high-speed wireless communication in the future. However, due to the propagation characteristics of mmWave, beam alignment becomes a key challenge in mobile environments. In this paper, we develop a joint 3D recursive beam and channel tracking algorithm that can achieve low tracking error. We discuss the special challenges in optimazing the beamforming matrix of 3D tracking. A general asymptotically optimal beamforming matrix is given to obtain the minimum Cramer-Rao lower bound (CRLB) of beam and channel tracking. The beamforming matrix can be used in different channel environments when antenna number is large enough. In static scenarios, three theorems are developed to prove that the algorithm converges to the minimum CRLB. Simulation results show that our algorithm outperforms several existing algorithms. 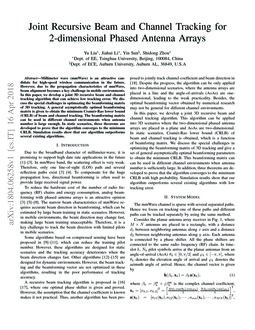 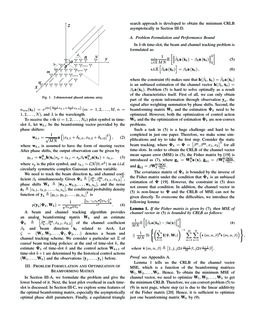 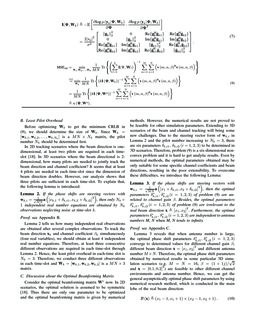 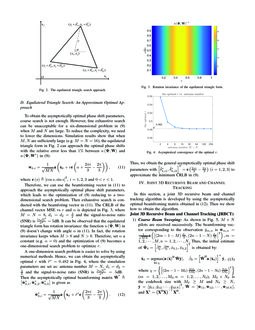 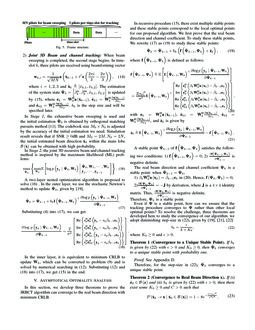 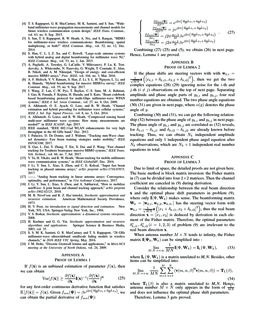 In this paper, we discuss the design of a sliding-correlator channel sou...
Bharath Keshavamurthy, et al. ∙

Beamforming for mmWave communications is well-studied in the PHY based o...
Yavuz Yaman, et al. ∙

High-speed trains (HSTs) are being widely deployed around the world. To ...
Jun-Bo Wang, et al. ∙

Due to the low hardware cost and energy consumption, analog beamforming is often used in mmWave mobile communications to provide large array gains [1, 2]. However, the beam steered by analog beamforming has small angular spreads. Slight misalignment can cause severe energy loss. Accurate alignment can be achieved by beam training at the expense of large pilot overhead in static or quasi-static scenarios. Nevertheless, this price is unacceptable in fast-moving environments. Therefore, efficient beam tracking is important for serving fast mobility users in mmWave communication.

Some beam tracking methods has been proposed [3, 4, 5]

, utilizing historical observations and estimations to obtain current estimate. Despite this, the analog beamforming vectors are not optimized in those tracking algorithms, resulting in a waste of transmission energy. A beam tracking algorithm is proposed in

[6], trying to optimize the analog beamforming vectors, assuming the channel coefficient is known. In [7], the authors start to jointly track the channel coefficient and beam direction with optimal analog beamforming vectors. The theorems of convergence and optimality are established for joint tracking. However, all these algorithms are based on uniform linear array (ULA) antennas, which can only support one-dimensional (1D) beam tracking. While in several mobile scenarios, e.g., unmanned aerial vehicle (UAV) scenarios [8], the beam may also come from different horizontal and vertical directions. Hence, we need to dynamically track the two-dimensional (2D) beam direction with 2D phased antenna arrays.

In this paper, we design a joint beam and channel tracking algorithm for 2D phased antenna arrays to handle the problem above. The main contributions and results are summarized as follows:

We consider a mmWave receiver equipped with a planar phased antenna array111Note that tracking is needed at both the transmitter and receiver. However, considering the transmitter-receiver reciprocity, the beam and channel tracking of both sides have similar designs. Hence, we focus on beam and channel tracking on the receiver side., as shown in Fig. 1. The planar array consists of M×N antenna elements that are placed in a rectangular area, with a distance d1 (d2) between neighboring antenna elements along x-axis (y-axis)222To obtain different resolutions in horizontal direction and vertical direction, the antenna numbers along different directions may not be the same, i.e., M≠N [9]. To suppress sidelobe, the antennas may be unequally spaced, i.e., d1≠d2 [10].. The antenna elements are connected to the same RF chain through different phase shifters. The system is time-slotted. To estimate and track the direction of the incoming beam, the transmitter sends q pre-determined pilot symbols sp in each time slot, where |sp|2=Ep is the transmit power of each pilot symbol.

In mmWave channels, only a few paths exist due to the weak scattering effect [1]. Because the angle spread is small and the mmWave system is usually configured with a large number of antennas, the interaction between multi-paths is relatively weak. In other words, the incoming beam paths are usually sparse in space, making it possible to track each path independently [11]. Hence, we focus on the method for tracking one path. Different paths can be tracked separately by using the same method.

In time-slot k, the direction of the incoming beam path is denoted by (θk,φk), where θk∈[0,π/2] is the elevation angle of arrival (AoA) and φk∈[−π,π) is the azimuth AoA. The channel vector of this path is

where βk=βrek+jβimk is the complex channel coefficient, xk=[xk,1,xk,2]T=[Md1cos(θk)cos(φk)λ,Nd2cos(θk)sin(φk)λ]T is the direction parameter vector determined by (θk,φk),

Let wk,i be the analog beamforming vector for receiving the i-th (i=1,⋯,q) pilot symbol in time-slot k, given by

where ˜Δk,i is the direction parameter offset corresponding to wk,i. After phase shifting and combining, the observation at the baseband output of RF chain is given by

as the noise vector. Then the conditional probability density function of the observation vector

Let ζ=(W1,W2,…,^ψ1,^ψ2,…) denote a beam and channel tracking scheme. We consider a particular set Ξ of causal beam tracking policies: in time-slot k, the analog beamforming matrix Wk and estimate ^ψk are based on the previously used analog beamforming matrix W1,⋯,Wk−1 and historical observations y1,⋯,yk−1. Hence, in k-th time-slot, the beam and channel tracking problem is formulated as:

where the constraint (7) ensures that ^hk≜^βka(^xk)

is an unbiased estimation of the channel vector

hk=βka(xk) and the constraints (1)-(4) ensure the steering vector form of analog beamforming vectors.

) is difficult to solve optimally due to several reasons: (i) it is a constrained partially observed Markov decision process (C-POMDP) that is usually quite difficult to solve. (ii) The analog beamforming matrix

Wk and the estimate ^ψk need to be optimized. However, both the optimization of Wk and ^ψk are non-convex problems.

Before giving some theoretical results of problem (6), we will first study the pilot overhead needed for beam and channel tracking in 2D phased antenna arrays.

Iii-B How Many Pilots Are Needed?

When tracking the channel parameters jointly, four real variables (i.e., the real part βrek and imaginary part βimk of channel coefficient βk and the two direction parameters xk,1,xk,2) need to be estimated. Then the following lemma is proposed to help determine the smallest q:

If the analog beamforming vectors are steering vectors, i.e., wk,i=1√MNa(x+Δk,i), then at least q observations are needed to estimate q+1 real variables in time-slot k.

Lemma 1 tells us at least three observations are required in each time-slot to estimate four real variables. Hence, the smallest pilot number in each time-slot is q=3, i.e., the analog beamforming matrix Wk=[wk,1,wk,2,wk,3].

The huge challenge to solve problem (6) optimally makes it hard to complete in just one paper. Therefore, we perform some theoretical analysis for static scenarios as the first step in this paper.

The MSE of channel vector in (6) is lower bounded as follows:

where Δ∗1,Δ∗2,Δ∗3 denote the optimal direction parameter offsets. Hence, let W∗1=W∗2=⋯W∗k=W∗ and we can obtain the minimum CRLB by (III-C).

Let us consider the optimal analog beamforming matrix W∗. In (III-C), three 2D direction parameter offsets need to be optimized. It is hard to get analytical results for such a six-dimensional non-convex problem. Numerical search is a feasible way to handle the problem. However, these optimal offsets may be related to some system parameters, e.g., channel coefficient β, direction parameter vector x and antenna array size M,N. Once these system parameters change, numerical search has to be re-conducted, leading to high complexity. To overcome this challenge, we explore the properties of Δ∗1,Δ∗2,Δ∗3 and obtain the following lemma:

1) Δ∗1,Δ∗2,Δ∗3 are invariant to the channel coefficient β;

2) Δ∗1,Δ∗2,Δ∗3 are invariant to the direction parameter vector x;

By numerical search in the main lobe of the direction parameter vector:

we can obtain the asymptotically optimal direction parameter offsets ˜Δ∗1,˜Δ∗2,˜Δ∗3 in TABLE I and Fig. 2.

With these offsets, a general way to generate the asymptotically optimal analog beamforming matrix ˜W∗k=[~w∗k,1,~w∗k,2,~w∗k,3] is obtained to achieve the minimum CRLB as below:

The proposed tracking algorithm is similar to that in [7]. The main difference is that we need M×N pilots to estimate the initial direction parameter offsets and three analog beamforming vectors to track the time-varying beam direction. Joint Beam and Channel Tracking:

where f(^ψk−1,ψk) is defined as follows:

and ^zk is given by

The channel parameter ψk is a stable point: when ^ψk−1=ψk,

In static scenarios, where , the corresponding theorems are developed to study the convergence of our algorithm. We adopt the diminishing step-size in (20), given by [14, 15, 16]

If bk is given by (20) with ϵ>0 and K0≥0, then ^ψk converges to a unique stable point with probability one.

Therefore, for the general step-size in (20), ^ψk converges to a unique stable point.

At the coarse beam sweeping stage of our proposed algorithm, the initial estimation ^x0 within main lobe B(x) in (12) can be obtained with high probability. Under the condition ^x0∈B(x), Theorem 2 tells us the probability of ^xk→x is related to |sp|2ϵ2σ2. Hence, we can reduce the step-size and increase the transmit SNR |sp|2σ2 to make sure that ^xk→x with probability one.

Theorem 3 tells us ϵ should not be too large or too small. By Theorem 3, if ϵ=1, then we achieve the minimum CRLB asymptotically with high probability.

[18] and the joint beam and channel tracking algorithm in [7] (using two pilots to track each dimension of the 2D beam direction). In each time-slot, three pilots are transmitted for all the algorithms to ensure fairness. When adopting the joint beam and channel tracking algorithm by using four pilots, we use a buffer to store the received pilots and update the estimate when receiving four new pilots. Based on the model in Section II, the parameters are set as: M=N=8, the antenna spacing d1=d2=λ2, the codebook size M0=2M,N0=2N, the pilot symbol sp = 1, and the transmit SNR=|sp|2σ2=0dB.

indicates that the channel vector MSE of our proposed algorithm approaches the minimum CRLB quickly and achieves much lower tracking error than other algorithms.

In dynamic scenarios, the AoA (θ,ϕ) as defined in Section II is modeled as a random walk process, i.e., θk+1=θk+Δθ, ϕk+1=ϕk+Δϕ; Δθ,Δϕ∼CN(0,δ2). The initial AoA values are chosen evenly and randomly in θ0∈[0,π2], ϕ0∈[−π,π). The channel coefficient is modeled as Rician fading with a K-factor κ=15dB, according to the channel model in [19]. As for the step-size bk, we adopt the constant step-size. Numerical results show that when bk=0.7, the joint beam and channel tracking algorithm can track beams with higher velocity. Therefore, the step-size is set as a constant bk=0.7. Fig. 6

indicates the proposed algorithm can achieve higher tracking accuracy than the other four algorithms. In addition, if we set a tolerance error et, e.g., et=0.2, then our algorithm can support higher angular velocities.

In this paper, we have developed a joint beam and channel tracking algorithm for 2D phased antenna arrays. A general sequence of optimal analog beamforming parameters is obtained to achieve the minimum CRLB. The work is a first step to beam and channel tracking with 2D phased antenna arrays. In our future work, we will focus on the following aspects: i) establishing the corresponding theorems in dynamic scenarios; ii) jointly tracking multiple paths; iii) tracking at both the transmitter and receiver.

Since the effect of noise can be reduced to zero by multiple observations, we ignore the observation noise in the proof for the sake of simplicity.

If the analog beamforming vectors are steering vectors, i.e., wk,i=1√MNa(x+Δk,i), where Δk,i=[δk,i1,δk,i2]T denotes the i-th direction parameter offset, then we get the complex observation equation for the i-th observation:

Then the relationship between the phase angles of two different observations yk,i and yk,j(i≠j) is given by

where δk,i1−δk,j1 and δk,i2−δk,j2 are determined by the direction parameter offsets and unrelated to the channel parameter vector ψk.

Appendix B Proof of Lemma 2

where I(x) is the corresponding Fisher information matrix.

The partial derivative of hmn(ψ) is given as follows:

Lemma 3 is proved in three steps:

Step 1: We prove that Δ∗1,Δ∗2,Δ∗3 are unrelated to channel coefficient β.

The basic method is block matrix inversion: the Fisher information matrix in (9) is divided into four 2×2 matrices as follows: