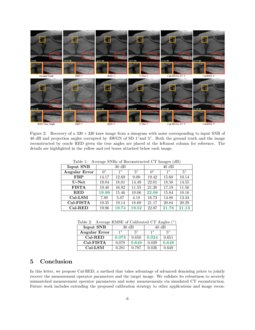 The reconstruction of an unknown image x from a set of noisy measurements y is crucial in imaging inverse problems such as tomography [1, 2], phase retrieval [3, 4], and compressive sensing [5, 6]. When solving such ill-posed inverse problems, a widely used approach is to regularize the solution by using an image prior, such as the Tikhonov regularization [7] or total variation regularization (TV) [8].

Traditional image reconstruction methods assume accurate knowledge of the measurement operator characterizing the imaging system. In some cases, however, this operator is not known to sufficient accuracy, and can be modelled as depending on some parameters θ that have to be calibrated to obtain an accurate characterization of the imaging system. For example, calibration is essential in computerized tomography (CT) [9] when there is uncertainty in the projection angles used in data collection. In such settings, it is common to either manually calibrate the imaging system by using a known phantom [10, 11, 12, 13] or embed a calibration step into the reconstruction method [14, 15, 16].

There has been considerable recent interest in plug-and-play priors (PnP) [17] and regularization by denoising (RED) [18], as frameworks for exploiting image denoisers as priors for image reconstruction. These methods achieve state-of-the-art performance in a variety of imaging applications by integrating advanced denoisers that are not necessarily expressible in the form of a regularization function [19, 20, 21, 22, 23, 24, 25, 26, 27, 28, 29]. However, current PnP/RED algorithms assume exact knowledge of the measurement operator, limiting their ability to solve problems involving parametric uncertainties in the data acquisition.

We propose a new calibrated RED (Cal-RED) method that integrates an automatic parameter calibration procedure within the RED reconstruction. Each iteration of Cal-RED performs a θ-update step, followed by a traditional x-update step, leading to the joint recovery of the unknown image x and parameters θ. One of the key benefits of Cal-RED is that it can leverage powerful deep denoisers, such as DnCNN [30], for regularizing the inverse problem. We validate Cal-RED on CT by showing its ability to: (a) reduce the root mean squared error (RMSE) of the projection angles from 5\lx@math@degree to 0.65\lx@math@degree; and (b) improve the imaging signal to noise ratio (SNR) from 10.16 dB (uncalibrated) to 21.13 dB (calibrated), with only a 0.95 dB gap relative to the oracle RED that knows the true angles. Note that while our focus in this letter is on RED, our calibration strategy is also fully compatible with PnP.

Consider the imaging problem specified by the linear model

and the nonsmooth TV regularizer h(x)=τ||Dx||1, where τ>0 is the regularization parameter and D is the image gradient [8]. Alternating direction method of multipliers (ADMM) [31] and fast iterative shrinkage/thresholding algorithm (FISTA) [32] are two common optimization algorithms that address the nonsmoothness of h in image reconstruction via the proximal operator

which can be interpreted as a

maximum a prior probability (MAP)

Deep learning has recently gained popularity for solving imaging inverse problems. An extensive review of deep learning in this context can be found in [33, 34, 35]. Instead of explicitly defining an optimization problem, the traditional deep-learning approach is based on training an existing network architecture, such as UNet [36], to invert the measurement operator by exploiting the natural redundancies in the imaging data [37, 38]

. It is common to first bring the measurements to the image domain and train the network to map the corresponding low-quality images to their clean target versions via supervised learning

RED is a recently introduced image recovery framework [18, 29] that seeks an images x∗ that satisfy

where ∇gθ denotes the gradient of the data-fidelity term using the true calibration parameters θ, τ is the regularization parameter, Dσ is a denoiser for the input noise level σ>0. RED thus computes an equilibrium point that balances the data fidelity against the fixed points of the denoiser. When the denoiser is locally homogeneous and has a symmetric Jacobian [29], the term τ(x−Dσ(x)) corresponds to the gradient of the regularization function

RED has been extensively applied in computational imaging, including in image restoration [28], phase retrieval [27], and tomographic imaging [1]. Later works have developed scalable variants of RED [26, 39] and further replace the AWGN denoising with a general artifact-removal operator [40].

The target-free calibration of the measurement operator has been an emerging topic in recent years. For CT scanners with slightly misaligned projection angles, existing calibration methods include entropy-based correction [41], frequency-based correction [42], and a technique that combined gradient descent and multi-range testing [14]. A popular method to calibrate projection angles of Cryo-EM is called projection-matching [43, 44], which relies on a prior estimate of the density map of the unknown single particle. It seeks the angle of every projection by pairing it with a clean template of the projection of the estimated density map from a known angle. Malhotraz et al. [16]

propose a three-step pipeline for Cryo-EM to recover the projection angles and the target density map in sequence: (a) denoise the projections by the Principal Component Analysis technique, (b) estimate the angles through iterative coordinate gradient descent, and (c) reconstruct the density map by

filtered back-projection (FBP). The key contribution of this paper is the investigation of the calibration problem in the context of PnP/RED algorithms, which has not been done in the prior work.

The proposed Cal-RED algorithm is summarized in Algorithm 1. It alternates between the updates of θ and x. We initialize θ with their corresponding nominal values, ^θ, which are assumed to be known from the design of the imaging system. We additionally initialize the image x with a direct inversion from measurements y, which for CT reduces to the traditional FBP [9].

For the θ-optimization, as shown in lines 5-7 in Algorithm 1, we minimize the objective function

by performing the gradient descent

In Equation 7, we consider the Tikhonov penalty as the prior for θ. The partial derivative ∂gθ(x,θ)/∂θ is calculated by automatic differentiation [45].

We update x by following the RED framework, as shown in lines 9-11 of Algorithm 1. For the denoising prior Dσ, we choose a 17-layer DnCNN architecture in which all the convolution filters are of size 3×3 and every feature map has 64 channels. Note that Cal-RED does not modify the x update step of RED, which implies that the θ-update step of Cal-RED could also be integrated within PnP or other variants of RED, such as BC-RED [39].

When qk=1 for all k, the algorithms reverts to the usual gradient method without acceleration. In Algorithm 1, the variables s and u store the intermediate values used for acceleration of x and θ, respectively.

In this section, we validate the performance of Cal-RED on simulated parallel-beam CT reconstruction, where the 2D target x is rotated around an axis to acquire projections from different angles and form a sinogram. We assume that the CT machine is designed to project from nominal angles ^θ, an array of 90 projection angles that are evenly-distributed on a half circle. However, due to alignment errors, the CT machine actually projects from θ, another array of 90 angles that is assumed to be the result of corrupting ^θ

by an unknown AWGN vector with standard deviation (SD) of 1° and 5°, respectively. In our experiments, we synthesize the sinograms by using the ground-truth

θ and further corrupt these sinograms by AWGN corresponding to the input SNR of 40 dB and 30 dB, respectively.

We quantify the image quality by using SNR (dB)

and the angular error by RMSE

All numerical results are averaged over six medical knee images discretized to the size of 320×320 pixels. Note that the measurement operator Hθ in this case corresponds to the Radon transform.

We compare Cal-RED with several baseline methods, including RED, U-Net, FISTA and the traditional least-square method (LSM). For both Cal-RED and RED, we train DnCNN denoisers for AWGN removal at three noise levels σ∈{5,10,15} and pick the one that achieves the best performance for evaluation. We generate the training data for U-Net by filtered-back-projecting the sinogram using the mismatched angles ^θ. We train an individual U-Net for each combination of {30dB,40dB}×{0\lx@math@degree,1\lx@math@degree,5\lx@math@degree}. In order to better demonstrate the benefit of using deep denoising prior, we run FISTA with the TV regularizer for comparison. We also incorporate the θ-update step into both FISTA and LSM to construct the angle-calibrating FISTA (Cal-FISTA) and the angle-calibrating LSM (Cal-LSM), respectively.

Figure 1 illustrates the convergence of Cal-RED in terms of both image SNR and angular RMSE. In the cases where θ is severely mismatched, Cal-RED is able to reduce the angular RMSE by a factor of more than 7 — from 5°to around 0.65°; moreover, Cal-RED can achieve a good reconstruction comparable to that of RED using the true θ with respect to SNR. Table 1 and Table 2 summarize the numerical results under different combinations of input sinogram SNR and angular error. It is worth noting that Cal-RED and Cal-FISTA significantly outperform RED and FISTA, respectively, which highlights the effectiveness of the θ-update step. Despite being designed for the angle calibration purpose, when Cal-RED is applied to a problem without calibration errors, it achieves an SNR only 0.03 dB less than that of the original RED. When the input SNR is 30 dB, the angles recovered by Cal-RED and Cal-FISTA are far more accurate than those recovered by Cal-LSM, which demonstrates how denoising priors can also contribute to measurement operator calibration.

Figure 2 compares the visual results of FBP, U-Net, Cal-FISTA, Cal-RED, and RED. Both the reconstructions of FBP and uncalibrated RED suffer from obvious line artifacts, which demonstrates their vulnerability to a mismatched measurement operator. Although Cal-FISTA achieves an SNR close to that of Cal-RED, its reconstruction contains visible blocking artifacts. The U-Net removes most of the artifacts that are contained in the FBP reconstruction, but it also has an undesirable effect of oversmoothing small features. While the traditional deep learning alone fails to balance the preservation of features and the removal of artifacts, deep denoising priors like DnCNN help Cal-RED to reconstruct high-resolution images with minimal artifacts. For this particular image, when the projection angles are corrupted by AWGN of SD 5°, Cal-RED is able to achieve a remarkable SNR of 21.40 dB, while uncalibrated RED only achieves SNR of 10.01 dB.

In this letter, we propose Cal-RED, a method that takes advantage of advanced denoising priors to jointly recover the measurement operator parameters and the target image. We validate its robustness to severely mismatched measurement operator parameters and noisy measurements via simulated CT reconstruction. Future work includes extending the proposed calibration strategy to other applications and image reconstruction frameworks.

Research presented in this article was supported by the Laboratory Directed Research and Development program of Los Alamos National Laboratory under project number 20200061DR.