A celebrated analogy between prime factorizations of integers and cycle decompositions of permutations is explored here. Asymptotic formulas characterizing semismooth numbers (possessing at most several large factors) carry over to random permutations. We offer a survey of practical methods for computing relevant probabilities of a bivariate or trivariate flavor. 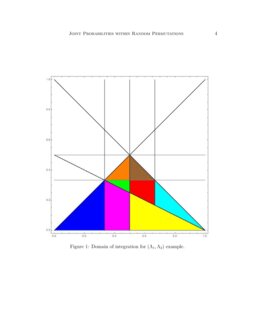 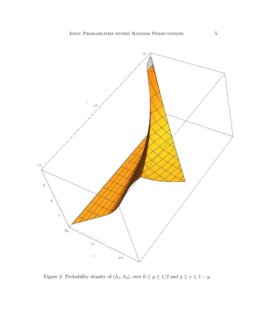 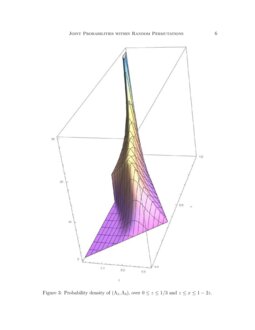 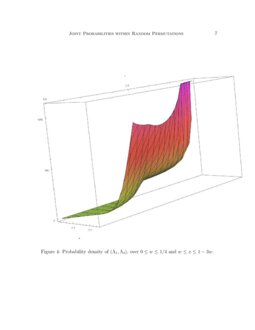 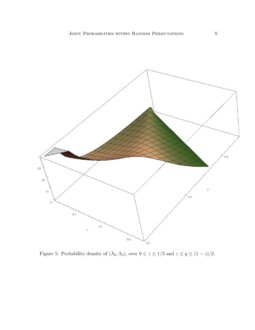 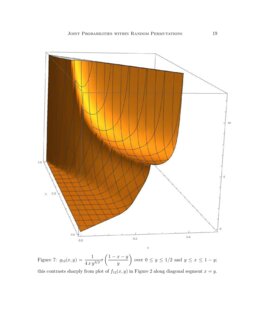 Stability of Sampling for CUR Decompositions

Survey schemes for stochastic gradient descent with applications to M-estimation

In certain situations that shall be undoubtedly more and more common in ...
Stephan Clémençon, et al. ∙

Difficulties presented by the numerical integration of f12(x,y) are evident in Figure 2.  The surface appears to touch the xy-plane only when y=0; its prominent ridge occurs along the line y=(1−x)/2 because (1−x−y)/y=1 corresponds to a unique point of nondifferentiability for ξ↦ρ(ξ); its remaining boundary hovers over the broken line y=min{x,1−x}, everywhere finite except in the vicinity of x=0.

Complications are compounded for the three other densities (which are, in themselves, approximations).  Figure 3 contains a plot of

The surface appears to touch the xz-plane when z=0 and 0<x<1/2 simultaneously, as well as everywhere along the broken line z=min{x,(1−x)/2}.

Figure 4 contains a plot of

The (precipitously rising) surface appears to touch the xw-plane only when w=0 and 0<x<1/2 simultaneously; its remaining boundary hovers over the broken line w=min{x,(1−x)/3}, everywhere finite except in the vicinity of x=0. The vertical scale is more expansive here than for the other plots.

Figure 5 contains a plot of

The (fairly undulating) surface appears to touch the yz-plane only when z=1−2y.  Unlike the other densities, a singularity here occurs at (y,z)=(0,0).

be the exponential integral.  Upon normalization, the hthmoment of the rth longest cycle length is [10, 11, 12]

(in this paper, rank r=1,2,3 or 4; height h=1 or 2).  The cross-correlation between rth longest and sth longest cycle lengths is

discussed a remarkable heuristic model, based on random bisection, that simplifies the computation of joint probabilities involving

Λ1 and Λ2.  In the same paper, they rigorously proved that asymptotic predictions emanating from the model are valid.  Subsequent researchers extended the work to Λ1 and Λ3, to Λ1 and Λ4, and to Λ2 and Λ3.  We shall not enter into details of the model nor its absolute confirmation, preferring instead to dwell on numerical results and certain relative verifications.

Note the slight change from earlier – writing Λ2 before Λ1 – a convention we adopt so as to be consistent with the literature.  Let J1(a,b)=I0(a)+I1(a,b).  Return now to the example from the introduction.  Evaluating

is less numerically problematic than evaluating

The advantages of using the Bach & Peralta formulation will become more apparent as we move forward (incidently, their G is the same as our J1).

A verification of J1(a,b) is as follows:

by the Second Fundamental Theorem of Calculus, hence

as anticipated by Billingsley [5].  An interpretation of I1(a,b) is helpful:

i.e., the probability that exactly one cycle has length in the interval (an, bn] and all others have length ≤an.  We have, for instance,

A verification of J2(a,b) is as follows:

by symmetry; thus by Leibniz’s Rule,

as was to be shown.  An interpretation of I2(a,b) is helpful:

i.e., the probability that exactly two cycles have length in the interval (an, bn] and all others have length ≤an.

We omit details of the verification of J3(a,b), except to mention the start point

i.e., the probability that exactly three cycles have length in the interval (an, bn] and all others have length ≤an.

under the additional condition a+b+c≤1.  If we were to suppose that this condition is unnecessary and set c=1, then by definition of ρ2, we would have

where K1 is similar (but not identical) to I2:

On the one hand, our supposition is evidently false.  In the following, we compare provisional theoretical values (eight digits of precision) against simulated values (just two digits):

On the other hand, a verification of L1(a,b) is as follows:

as was to be shown.  If a correction term of the form φ(a)+ψ(b) could be incorporated into K1(a,b), rendering it suitably smaller, then the above argument would still go through.  Determining such expressions φ(a), ψ(b) is an open problem.

under the additional condition α+β+γ+δ≤1.  Such a formula might eventually assist in calculating

We leave this task for others.  Accuracy can be improved by including a subordinate term – we have studied only main terms of asymptotic expansions – this fact was mentioned in [21], citing [19], but for proofs one must refer to [20].  It is striking that so much of this material remains unpublished (seemingly abandoned but thankfully preserved in doctoral dissertations; see [22, 23] for more).

An odd confession is necessary at this point and it is almost surely overdue.  The multivariate probabilities discussed here were originally conceived not in the context of

n-permutations as n→∞, but instead in the difficult realm of integers ≤N (prime factorizations with cryptographic applications) as N→∞.  Knuth & Trabb Pardo [3, 24, 25] were the first to tenuously observe this analogy.  Lloyd [26, 27] reflected, “They do not explain the coincidence… No isomorphism of the problems is established”.  Early in his article, Tao [28] wrote how a certain calculation doesn’t offer understanding for “why there is such a link”, but later gave what he called a “satisfying conceptual (as opposed to computational) explanation”.  After decades of waiting, the fog has apparently lifted.

A counterpart of Billingsley’s f1234:

is applicable to the study of connected components in random mappings [6, 8].  Let Λ1 and Λ2 denote the largest and second-largest such components. We use similar notation, but different techniques (because not as much is known about σ as about ρ.)  For example,

Call this probability Q.  The analog here of what we called A in the introduction is

and the analog of we called 1−A−B is

and should lead in due course to a formula for σ2, generalizing σ1=σ.

Given a random n-permutation, let Sr denote the length of the rth shortest cycle (0 if the permutation has no rth cycle) and Cℓ denote the number of cycles of length ℓ.  Since, as n→∞, the distribution of Cℓ approaches Poisson(1/ℓ) and C1, C2, C3, … become asymptotically independent [29], we can calculate corresponding probabilities for Sr.  For example,

It is understood that these are limiting quantities as n→∞.  As another example,

I am grateful to Michael Rogers, Josef Meixner, Nicholas Pippenger, Eran Tromer, John Kingman, Andrew Barbour, Ross Maller and Joseph Blitzstein for helpful discussions.  The creators of Mathematica, as well as administrators of the MIT Engaging Cluster, earn my gratitude every day.  Interest in this subject has, for me, spanned many years [30, 31].  A sequel to this paper will be released soon [32].