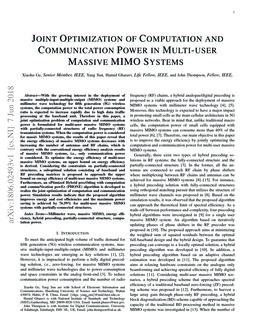 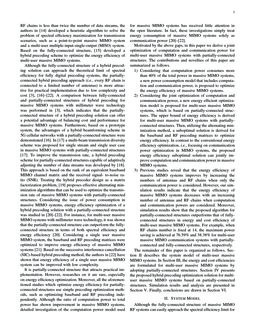 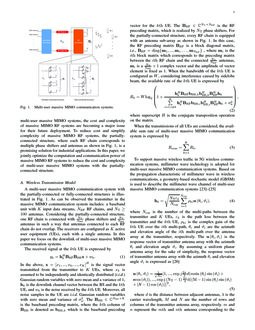 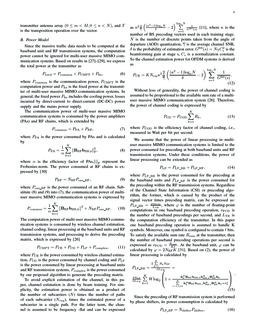 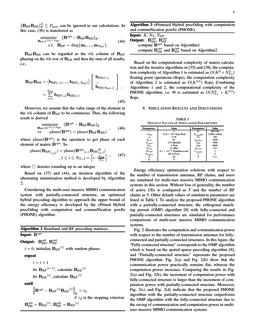 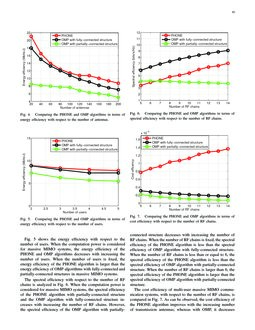 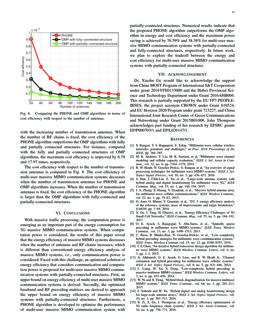 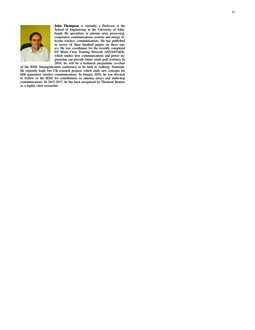 To meet the anticipated high volume of traffic demand for fifth generation (5G) wireless communication systems, massive multiple-input-multiple-output (MIMO) and millimeter wave technologies are emerging as key solutions [1, 2]. However, it is impractical to perform a fully digital precoding solution, i.e., zero-forcing, for massive MIMO systems and millimeter wave technologies due to power consumption and space constraints in the analog front-end [3]. To reduce communication power consumption and the number of radio frequency (RF) chains, a hybrid analogue/digital precoding is proposed as a viable approach for the deployment of massive MIMO systems with millimeter wave technology [4, 5]. Moreover, this technology is expected to have a major impact in promoting small cells as the main cellular architecture in 5G wireless networks. Bear in mind that, unlike traditional macro cells, the computation power of small cells equipped with massive MIMO systems can consume more than 40% of the total power [6, 7]. Therefore, our main objective in this paper is to improve the energy efficiency by jointly optimizing the computation and communication power for multi-user massive MIMO systems.

Generally, there exist two types of hybrid precoding solutions in RF systems: the fully-connected structure and the partially-connected structure [3]. In the former, all the antennas are connected to each RF chain by phase shifters where multiplexing between RF chains and antennas can be achieved for massive MIMO systems [8, 9, 10, 11, 12, 13, 14, 15]. For instance, a hybrid precoding solution with fully-connected structures using orthogonal matching pursuit that utilizes the structure of millimeter wave channels was proposed in [8]. Based on the simulation results, it was observed that the proposed algorithm can approach the theoretical limit of spectral efficiency. As a trade-off between performance and complexity, four precoding hybrid algorithms were investigated in [9] for a single user massive MIMO system. An algorithm based on iteratively updating phases of phase shifters in the RF precoder was proposed in [10]. The proposed approach aims at minimizing the weighted sum of squared residuals between the optimal full-baseband design and the hybrid design. To guarantee that precoding can converge to a locally optimal solution, a hybrid precoding algorithm was developed in [10]

. In addition, a hybrid precoding algorithm based on an adaptive channel estimation was developed in

[11]. The proposed algorithm aims at relaxing hardware constraints on the analogue only beamforming and achieving spectral efficiency of fully digital solutions [11]. Considering multi-user massive MIMO scenarios, a hybrid precoding scheme that approaches spectral efficiency of a traditional baseband zero-forcing (ZF) precoding scheme was proposed in [12]. Furthermore, to harvest a large array gain through phase-only RF precoding, a hybrid block diagonalization (BD) scheme capable of approaching the capacity of the traditional BD processing method in massive MIMO systems was investigated in [13]. When the number of RF chains is less than twice the number of data streams, the authors in [14]

developed a heuristic algorithm to solve the problem of spectral efficiency maximization for transmission scenarios, such as a point-to-point massive MIMO system and a multi-user multiple-input-single-output (MISO) system. Based on the fully-connected structure,

It is partially-connected structure that attracts practical implementation. However, researches on it are rare, especially on energy efficiency optimization. Moreover, all the aforementioned studies which optimize energy efficiency for partially-connected structures use simple precoding optimization methods, such as optimizing baseband and RF precoding independently. Although the ratio of computation power to total power has shown improvement in massive MIMO systems, detailed investigation of the computation power model used for massive MIMO systems has received little attention in the open literature. In fact, these investigations simply treat energy consumption of massive MIMO systems solely as communication power [20, 21, 22].

Motivated by the above gaps, in this paper we derive a joint optimization of computation and communication power for multi-user massive MIMO systems with partially-connected structures. The contributions and novelties of this paper are summarized as follows.

The received signal at the kth UE is expressed by

is the signal vector transmitted from the transmitter to

K UEs, where xk is assumed to be independently and identically distributed (i.i.d.

) Gaussian random variables with zero mean and a variance of 1,

hk is the downlink channel vector between the BS and the kth UE, and wk is the noise received by the kth UE. Moreover, all noise samples in the UE are i.i.d. Gaussian random variables with zero mean and variance of σ2n. The BBB∈CNRF×K is the baseband precoding matrix, where the kth column of BBB is denoted as bBB,k which is the baseband precoding vector for the kth UE. The BRF∈CNT×NRF is the RF precoding matrix, which is realized by NT phase shifters. For the partially-connected structure, every RF chain is equipped with an antenna sub-array as shown in Fig. 1. In this case, the RF precoding matrix BRF is a block diagonal matrix, i.e., BRF=diag{m1,...,mi,…,mNRF} , where mi is the ith block matrix which corresponds to the precoding matrix between the ith RF chain and the connected NTNRF antennas, mi is a NTNRF×1 complex vector and the amplitude of vector element is fixed as 1. When the bandwidth of the kth UE is configured as W, considering interference caused by sidelobe beam, the available rate of the kth UE is expressed by

where superscript H is the conjugate transposition operation on the matrix.

When the transmissions of all UEs are considered, the available sum rate of multi-user massive MIMO communication system is expressed by

Since the massive traffic data needs to be computed at the baseband unit and RF transmission systems, the computation power cannot be ignored for multi-user massive MIMO communication systems. Based on results in [27, 28, 29], we express the total power at the transmitter as

The communication power of multi-user massive MIMO communication systems is consumed by the power amplifiers (PAs) and RF chains, which is extended by

where α is the efficiency factor of PAs,∥∥F represent the Frobenius-norm. The power consumed at RF chains is expressed by [30]

where Pone_RF is the power consumed of an RF chain. Substitute (8) and (9) into (7), the communication power of multi-user massive MIMO communication systems is expressed by

The computation power of multi-user massive MIMO communication systems is consumed by wireless channel estimation, channel coding, linear processing at the baseband units and RF transmission systems, and processing to derive the precoding matrix, which is expressed by [26]

is the probability of estimation error.

GBS(s)=NTC2s is the beamforming gain at stage s, Cs is a normalization constant. So the channel estimation power for OFDM systems is derived as

where PCOD is the efficiency factor of channel coding, i.e., measured in Watt per bit per second.

Since the precoding of RF transmission system is performed by phase shifters, its power consumption is calculated by

The power to run the precoding algorithm can be calculated by

where Θ denotes the complexity of the proposed algorithm, LTR denotes the transmitter efficiency and Ccmplx denotes a constant factor.

Furthermore, substituting (19) and (10) into (6), the total power of the transmitter is given by

Considering computation and communication power consumption, next we focus on optimizing the energy efficiency of multi-user massive MIMO communication systems for partially-connected structures by optimizing the hybrid precoding matrices of baseband and RF systems. This optimization problem is formed by

where ηEE is the energy efficiency, and Pmax is the maximum transmission power. ∥BRFBBB∥2F≤Pmax is the maximum transmission power constraint. Since RF precoding is performed by phase shifters, only the signal phases change. For the partially-connected structure of RF transmission systems, the element amplitude of complex vector: mi is fixed as 1. We should point out that when (3) and (20) are substituted into (21), the optimization problem of energy efficiency is a non-concave optimization problem.

where Ctotal is the total cost, which is comprised of power consumption cost: Cpower and the hardware cost: Chardware in communication systems. Without loss of generality, the total cost is calculated by

Taking into consideration the complexity and non-concave properties of the optimization problem in (21), it is difficult to directly solve the baseband and RF precoding matrices. Therefore, we first derive the upper bound on the energy efficiency and then propose a suboptimal solution with joint optimized baseband and RF precoding matrices that can approach the upper bound.

Theorem 1 (Upper bound of energy efficiency): When the joint precoding matrix B is a stationary matrix and the value of B satisfies the following result:

Since the right expression of (35) can be formulated as ATA, the left expression of (35) is a Hermitian symmetric positive semidefinite matrix. Hence, (¯ηEE)b(i)k(B(i))H(X−b(i)k)≥0 is satisfied for all values of b(i)k. By starting from any b(i)k and moving to X, ¯ηEE(B(i)) is a non-decreasing function. When a fully-digital precoding matrix is configured as a stationary point, the result of [32] proves that the energy efficiency optimization function of MIMO systems can be converged to an upper bound. When the fully-digital precoding matrix b is assumed as a stationary point(based on the result of [32]), the upper bounds of ¯ηEE(B(i)) can be computed. Consequently, ¯ηEE(B(i)) is a convergent function and the upper bound of energy efficiency is achieved for multi-user massive MIMO communication systems.

Based on the result in [19], (37) is a nonconvex quadratically constrained quadratic program (QCQP). Let xc=vec(BBB), boptc=vec(Bopt) and ζc=IK⊗BRF, where xc, boptc and ζc are complex vectors, and vec() denotes vectorization. To transfer (37) into a real QCQP, let t2=1 and

As a consequence, (37) becomes a real QCQP as follows

where x(n) denotes the nth value of x.

When a standard convex algorithm, such as the interior point algorithm [36] is performed for (43), an optimized solution Xopt is solved. Since the constraint condition: rank(X)=1 is removed in (43), the solution of (43), i.e., Tr(TXopt) is the lower bound of (42).