In this paper, we consider the design of joint resource blocks (RBs) and power allocation for dual-mode base stations operating over millimeter wave (mmW) band and microwave (μW) band. The resource allocation design aims to minimize the system energy consumption while taking into account the channel state information, maximum delay, load, and different types of user applications (UAs). To facilitate the design, we first propose a group-based algorithm to assign UAs to multiple groups. Within each group, low-power UAs, which often appear in short distance and experience less obstacles, are inclined to be served over mmW band. The allocation problem over mmW band can be solved by a greedy algorithm. Over μW band, we propose an estimation-optimal-descent algorithm. The rate of each UA at all RBs is estimated to initialize the allocation. Then, we keep altering RB's ownership until any altering makes power increases. Simulation results show that our proposed algorithm offers an excellent tradeoff between low energy consumption and fair transmission. 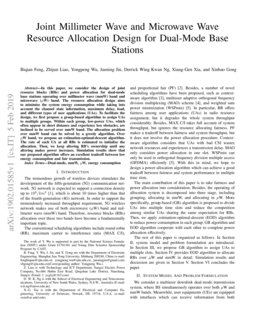 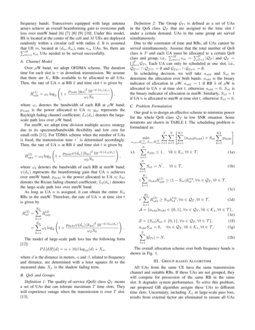 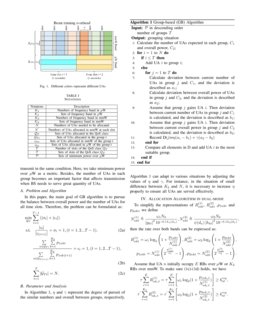 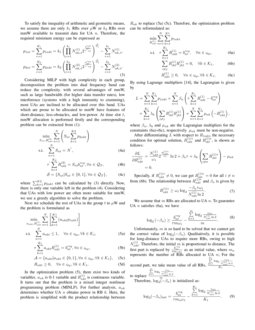 The tremendous growth of wireless devices stimulates the development of the fifth-generation (5G) communication network. 5G network is expected to support a connection density up to 106/km2 [1], which is about 10 times higher than that of the fourth-generation (4G) network. In order to support the tremendously increased throughput requirement, 5G wireless network makes use of both microwave (μW) band and millimeter wave (mmW) band. Therefore, resource blocks (RBs) allocation over these two bands have become a fundamentally important topic.

The conventional scheduling algorithms include round robin (RR), maximum carrier to interference ratio (MAX C/I), and proportional fair (PF) [2]. Besides, a number of novel scheduling algorithms have been proposed, such as context-aware algorithm [3], multiuser adaptive orthogonal frequency division multiplexing (MAO) scheme [4], and weighted sum power minimization (WSPmin) [5]. In particular, RR offers fairness among user applications (UAs) in radio resource assignment, but it degrades the whole system throughput considerably. Besides, MAX C/I takes full account of system throughput, but ignores the resource allocating fairness. PF makes a tradeoff between fairness and system throughput, but it does not involve the power allocation procedure. Context-aware algorithm considers that UAs with bad CSI wastes network resources and experiences a transmission delay. MAO only considers power allocation in one slot. WSPmin can only be used in orthogonal frequency division multiple access (OFDMA) efficiently [5]. With this in mind, we hope to design a power allocation algorithm which can achieve a good tradeoff between fairness and system performance in multiple time slots.

The main contribution of this paper is to take fairness and power allocation into consideration. Besides, the operating of allocation system is decomposed into three stage, including grouping, allocating in mmW, and allocating in μW. More specifically, group-based (GB) algorithm is proposed to divide UAs into multiple time slots and reduce the competition among similar UAs sharing the same expectation for RBs. Then, we apply estimation-optimal-descent (EOD) algorithm to reduce power consumption in each group. GB algorithm and EOD algorithm cooperate with each other to complete power allocation effectively.

The rest of this paper is organized as follows. In Section II, system model and problem formulation are introduced. In Section III, we propose GB algorithm to assign UAs to multiple slots. Section IV provides EOD algorithm to allocate RBs over μW and mmW in detail. Simulation results and discussion are given in Section V. Section VI concludes the paper.

We consider a multiuser downlink dual-mode transmission system, where BS simultaneously operates over both μW and mmW bands. Meanwhile, user equipments (UEs) are equipped with interfaces which can receive information from both frequency bands. Transceivers equipped with large antenna arrays achieve an overall beamforming gain to overcome path loss over mmW band [6][7][8][9][10]. Under this model, BS is located at the center of the cell and M UEs are deployed randomly within a circular cell with radius d. It is assumed that UE m, located at (dm,θm), runs κm UAs. So, there are ∑Mm=1κm UAs needed to be served successfully.

Over μW band, we adopt OFDMA scheme. The duration time for each slot is τ in downlink transmission. We assume that there are K1 RBs available to be allocated to all UAs. Then, the rate of UA n at RB k and time slot t is given by

where ω1 denotes the bandwidth of each RB at μW band; p1nkt is the power allocated to UA n; gkt represents the Rayleigh fading channel coefficient; L1(dn) denotes the large-scale path loss over μW band.

For mmW, we adopt time division multiple access strategy due to its spectrum/bandwidth flexibility and low cost for small cells [11]. For TDMA scheme when the number of UAs is fixed, the transmission time τ′ is determined accordingly. Then, the rate of UA n at RB k and time slot t is given by

As long as UA n is assigned, it can obtain the entire K2 RBs in the mmW. Therefore, the rate of UA n at time slot t is given by

The model of large-scale path loss has the following form [12]:

where d is the distance in meters, α and β, related to frequency and distance, are determined with a least squares fit to the measured data. Xσ is the shadow fading term.

The quality-of-service (QoS) class QT means a set of UAs that can tolerate maximum T time slots. They will experience outage when the transmission is over T slot. [13].

The Group GTt is defined as a set of UAs in the QoS class QT that are assigned to the time slot t under a certain demand. UAs in the same group are served simultaneously.

Due to the constraint of time and RBs, all UAs cannot be served simultaneously. Assume that the total number of QoS class is P and each UA must be allocated to a certain QoS class and group, i.e., ∑Mm=1κm=∑PT=1|QT| and QT=⋃Tt=1GTt. Each UA can only be scheduled at one slot, i.e., QT(1)∩QT(2)=∅ and GTt(1)∩GTt(2)=∅.

Our goal is to design an effective scheme to minimize power for the whole QoS class QT in low SNR situation. Some notations are shown in TABLE I. The scheduling problem is formulated as:

The overall allocation scheme over both frequency bands is shown in Fig. 1.

All UAs from the same UE have the same transmission channel and suitable RBs. If these UAs are not grouped, they will compete for possession of the same RB in the same slot. It degrades system performance. To solve this problem, our proposed GB algorithm assigns these UAs to different time slots. Uncertainty, including Xσ in large-scale pass loss, results from external factor are eliminated to ensure all UAs transmit in the same condition. Here, we take minimum power over μW as a metric. Besides, the number of UAs in each group becomes an important factor that affects transmission when BS needs to serve great quantity of UAs.

In this paper, the main goal of GB algorithm is to pursue the balance between overall power and the number of UAs for all time slots. Therefore, the problem can be formulated as:

In Algorithm 1, η and γ represent the degree of pursuit of the similar numbers and overall between groups, respectively. Algorithm 1 can adapt to various situations by adjusting the values of η and γ. For instance, in the situation of small difference between K2 and N, it is necessary to increase η properly to ensure all UAs are served effectively.

then the rate over both bands can be expressed as:

Assume that UA n initially occupy E RBs over μW or K2 RBs over mmW. To make sure (1c)-(1d) holds, we have

To satisfy the inequality of arithmetic and geometric means, we assume there are only

k1 RBs over μW or k2 RBs over mmW available to transmit data for UA n. Therefore, the required minimum energy can be expressed as

Considering MILP with high complexity in each group, decomposition the problem into dual frequency band can reduce the complexity. with several advantages of mmW, such as large bandwidth (for higher data transfer rates), low interference (systems with a high immunity to cramming), most UAs are inclined to be allocated over this band. UAs which are prone to be allocated to mmW have features of short-distance, less-obstacles, and low-power. At time slot t, mmW allocation is performed firstly and the corresponding problem can be extracted from (1):

where ∑K2k=1p2nkt can be calculated by (3) directly. Now, there is only one variable left in the problem (4). Considering that UAs with low power are often more suitable for mmW, we use a greedy algorithm to solve the problem.

In the optimization problem (5), there exist two kinds of variables. ank is 0-1 variable and R(1)nkt is continuous variable. It turns out that the problem is a mixed integer nonlinear programming problem (MINLP). For further analysis, ank determines whether UA n obtains power in RB k. Here, the problem is simplified with the product relationship between Rnk to replace (5a) (5c). Therefore, the optimization problem can be reformulated as:

By using Lagrange multipliers [14], the Lagrangian is given by

After differentiating L with respect to R1nkt, the necessary condition for optimal solution, R(1)∗nkt and R(1)∗ikt, is shown as follows:

We assume that m RBs are allocated to UA n. To guarantee UA n satisfies (6a), we have

Unfortunately, m is so hard to be solved that we cannot get the correct value of log2(−βn). Qualitatively, it is possible for long-distance UAs to require more RBs, owing to high N(1)nkt. Therefore, the initial m is proportional to distance. The first part is replaced by breqntτmnω1 as an initial value, where mn represents the number of RBs allocated to UA n; For the second part, we take mean value of all RBs, K1∑k=1log2τω1N(1)nktln2K1, to replace m∑k=1log2τω1N(1)nktln2m.

Therefore, log2(−βn) is initialized as:

is determined, the problem in (5) becomes a 0-1 integer linear programming (0-1 ILP) problem, which can be formulated as:

Increasing log2(−βn) with the step of Δ until feasible region of (10) is nonempty, we have

Similarly, UA n2 owns sets of RBs J′m2={kJ1,kJ2,⋯,kJm2,kIm1}. Normally, the inequality of arithmetic and geometric means holds and the variation of power is given by

According to (12)-(14), it is easy to obtain the matrix A recording gain and loss at each RB. So, any change of power at each RB, resulting from ownership transferring, can be obtained by adding elements in A. And the largest reduction at each RB is stored in matrix B. At every iterate, we choose which RB’s ownership should be transferred according to B.

In this section, we evaluate the performance of our proposed GB-EOD algorithm scheme in a multiuser downlink dual-mode transmission system by comparing it with context-aware algorithm. As in [3], we assume BS is located at the center of the small cell as (0, 0). Besides, M

UEs are assumed to be uniformly distributed within 5-200 meters away from BS. Each UE runs

V-a Power vs Number of UEs

Fig. 2 compares the performance of context-aware algorithm and GB-EOD algorithm. Under the premise of fixed power allocated to mmW in both algorithm, we compare the power required over μW band. It shows that low power is required in GB-EOD algorithm. It is reasonable because GB-EOD scheme in the same power can serve more UAs with proper power allocation, thus reduce the transmitting pressure on the other band. It is similar with fixed power over μW.

V-B Power vs Number of UAs allocated over mmW

In this paper, multiuser downlink dual-mode system has been studied to minimize the power. Before allocated in dual-mode, UAs are divided into multiple groups for the propose of decreasing competition. In each group, all UAs must transmit successfully to ensure fairness. Over mmW band, we take a greedy algorithm to select short-distance and low-power UAs to perform efficiently. Over μW band, we estimate βn by KKT conditions and take low-complexity algorithm to reduce power. Considering the performance of system, GB-EOD algorithm implements a pretty tradeoff between fairness and low power.