We study joint estimation of the inverse temperature and magnetization parameters (β,B) of an Ising model with a non-negative coupling matrix A_n of size n× n, given one sample from the Ising model. We give a general bound on the rate of consistency of the bi-variate pseudolikelihood estimator. Using this, we show that estimation at rate n^-1/2 is always possible if A_n is the adjacency matrix of a bounded degree graph. If A_n is the scaled adjacency matrix of a graph whose average degree goes to +∞, the situation is a bit more delicate. In this case estimation at rate n^-1/2 is still possible if the graph is not regular (in an asymptotic sense). Finally, we show that consistent estimation of both parameters is impossible if the graph is Erdös-Renyi with parameter p>0 free of n, thus confirming that estimation is harder on approximately regular graphs with large degree. 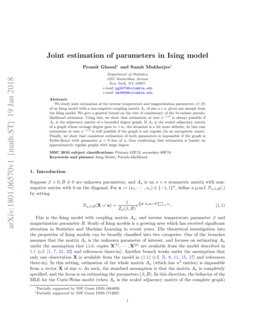 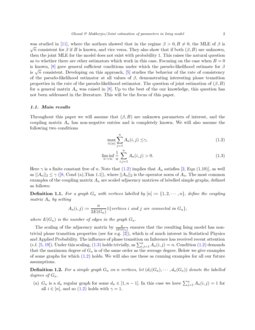 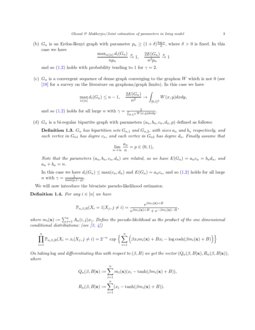 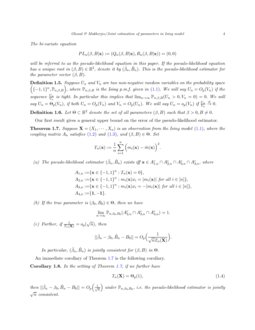 Spectral Analysis of the Adjacency Matrix of Random Geometric Graphs

The hardcore model on a graph G with parameter λ>0 is a probability meas...
Bhaswar B. Bhattacharya, et al. ∙

Spectral Planting and the Hardness of Refuting Cuts, Colorability, and Communities in Random Graphs

We study the problem of efficiently refuting the k-colorability of a gra...
Afonso S. Bandeira, et al. ∙

This is the Ising model with coupling matrix An, and inverse temperature parameter β and magnetization parameter B

. Study of Ising models is a growing area which has received significant attention in Statistics and Machine Learning in recent years. The theoretical investigation into the properties of Ising models can be broadly classified into two categories. One of the branches assumes that the matrix

entries) is impossible from a vector

X of size n. As such, the standard assumption is that the matrix An is completely specified, and the focus is on estimating the parameters (β,B). In this direction, the behavior of the MLE for the Curie-Weiss model (when An is the scaled adjacency matrix of the complete graph) was studied in [11], where the authors showed that in the regime β>0,B≠0, the MLE of β is √n consistent for β if B is known, and vice versa. They also show that if both (β,B)

are unknown, then the joint MLE for the model does not exist with probability 1. This raises the natural question as to whether there are other estimators which work in this case. Focusing on the case when

, demonstrating interesting phase transition properties in the rate of the pseudo-likelihood estimator. The question of joint estimation of

(β,B) for a general matrix An was raised in [8]. Up to the best of the our knowledge, this question has not been addressed in the literature. This will be the focus of this paper.

Throughout this paper we will assume that (β,B) are unknown parameters of interest, and the coupling matrix An has non-negative entries and is completely known. We will also assume the following two conditions

For a graph Gn with vertices labelled by [n]:={1,2,⋯,n}, define the coupling matrix An by setting

where E(Gn) is the number of edges in the graph Gn.

The scaling of the adjacency matrix by n2E(Gn) ensures that the resulting Ising model has non-trivial phase transition properties (see for e.g. [2]), which is of much interest in Statistical Physics and Applied Probability. The influence of phase transition on Inference has received recent attention (c.f. [5, 19]). Under this scaling, (1.3) holds trivially, as ∑ni,j=1An(i,j)=n. Condition (1.2) demands that the maximum degree of Gn is of the same order as the average degree. Below we give examples of some graphs for which (1.2) holds. We will also use these as running examples for all our future assumptions.

For a simple graph Gn on n vertices, let (d1(Gn),⋯,dn(Gn)) denote the labelled degrees of Gn.

We will now introduce the bivariate pseudo-likelihood estimator.

where mi(x):=∑nj=1An(i,j)xj. Define the pseudo-likelihood as the product of the one dimensional conditional distributions: (see [3, 4])

On taking log and differentiating this with respect to (β,B) we get the vector (Qn(β,B|x),Rn(β,B|x)), where

are two non-negative random variables on the probability space

Our first result gives a general upper bound on the error of the pseudo-likelihood estimator.

An immediate corollary of Theorem 1.7 is the following corollary.

In the setting of Theorem 1.7, if we further have

Corollary 1.8 shows that (1.4) is a sufficient condition for √n consistency of the pseudo-likelihood estimate. Note that condition (1.4) is an implicit condition, and it is not clear when this will hold. We will now give an exact characterization for (1.4) in terms of the matrix An for “mean field” matrices, introduced in the following definition.

We say that a sequence of matrices {An}n≥1 satisfies the mean field condition, if we have

Condition 1.5 was first introduced in [2] to study the limiting behavior of normalizing constant of Ising and Potts models. In particular, if An(i,j)=n2E(Gn)Gn(i,j), where Gn is the adjacency matrix of a graph, then (1.5) holds iff E(Gn)≫n. Indeed, this is because

Given the coupling matrix An, let Rn(i):=∑nj=1An(i,j) denote the ith row sum of An.

Our next result now gives a simple sufficient condition for joint √n consistency of the pseudo-likelihood estimator.

This raises the natural question as to what happens for regular graphs. The following theorem addresses this question by showing that whenever the coupling matrix An is mean field and asymptotically regular, the random variable Tn(X) is op(1).

Theorem 1.12 along with the upper bound of Theorem 1.7 together suggest that √n consistency may not be attained by the pseudo-likelihood estimator for asymptotically regular graphs with degree going to +∞. The following theorem confirms this conjecture for the special case when Gn is an Erdös-Renyi graph with parameter p>0, free of n.

It was pointed out in [11] that the MLE for (β,B) doesn’t exist for the Curie Weiss model. The above Theorem extends this by showing that consistent estimates do not exist when the underlying graph is Erdös-Renyi. Note that if we set p=1 in the Erdös-Renyi model we get a complete graph on n vertices, which corresponds to the Curie-Weiss model. We conjecture that there are no √n consistent estimates for both parameters whenever the graph sequence is regular with degree going to +∞.

If the average degree of a graph sequence does not go to +∞, joint estimation of both parameters at rate √n is always possible, as shown in the following theorem.

Suppose X=(X1,⋯,Xn) is an observation from the Ising model (1.1), where the coupling matrix An satisfies (1.2) and

Note that (1.2) and (1.8) together imply (1.3). To see how (1.8) captures sparse graphs, recall that for any graph with adjacency matrix Gn and An(i,j):=n2E(Gn)Gn(i,j) we have ∑ni,j=1An(i,j)2=n24E(Gn). Thus if (1.8) holds, then we must have E(Gn)=O(n), which says that the graph sequence is sparse. In particular Theorem 1.15 shows √n consistency when the underlying graph Gn has a uniformly bounded degree sequence, irrespective of whether Gn is regular or not.

To complete the picture, we show that if one of the two parameters are known, then the pseudo-likelihood estimator for the other parameter is √n consistent, for all (β,B)∈Θ. Thus joint estimation is indeed a much harder problem than estimation of the individual parameters. The proof of this proposition appears in the appendix.

1.2 Interpretation of results for graphs

Even though all our results apply for general matrices with non-negative entries, the most interesting examples for our theorems are the cases when An is the scaled adjacency matrix of a simple graph Gn as in Definition 1.1. Also the conditions take a simpler form. This subsection describes all our results in this special case. Recall that (d1(Gn),⋯,dn(Gn)) are the degrees of Gn, and let ¯d(Gn) denote the average degree. Also assume that (β,B)∈Θ, as has been the case throughout the paper. Finally note that (1.2) is equivalent to maxi∈[n]di(Gn)=O(¯d(Gn)), which we will assume throughout this subsection.

Figure 1 gives a gist of the above discussion on a summary tree.

Our results demonstrate a dichotomy in the joint √n-consistency of (β,B) based on whether the coupling matrix is approximately regular or not. In what follows, we address this dichotomy using simulation. At first, we fix 30 different values of the pair (β,B) on the line m=tanh(mβ+B) for m=0.3. Next, we draw two random d-regular graphs G1 and G2 with d=4 and d=50, with n=100 nodes. For each value of (β,B), we generate a sample from the Ising model with scaled adjacency matrices for the graphs G1 and G2. On each of those 30 different samples, we estimate (β,B) by solving the bivariate pseudolikelihood equation. We repeat the same experiment with number of nodes n=200, and random d-regular graphs (d=4,50). In Figure 2, we plot the corresponding pseudolikelihood estimates of (β,B) for n=100 and n=200 respectively. In both the figures, plots of the estimates for the case d=4 (resp. d=50) are colored in green (resp. red). Notice that the fit in the case when d=4 is more prominent in comparison to the case when d=50.

We thankfully acknowledge helpful discussions with Bhaswar B. Bhattyacharya and Sourav Chatterjee at various stages of this work.

The following Lemma is a collection of estimates to be used throughout the rest of this paper.

We also need the following lemma for proving Theorem 1.7 and Propositon 1.16. The proof of the lemma is deferred to the appendix.