A simple scheme for joint direction of arrival (DOA) and array manifold estimation for a MIMO array system is proposed, where only two transmit antennas are calibrated initially. It first obtains a set of initial DOA results by employing a rotational invariance property between two sets of received data, and then more accurate DOA and array manifold estimation is obtained through a local searching algorithm with several iterations. No strict half wavelength spacing is required for the uncalibrated antennas to avoid the spatial aliasing problem. 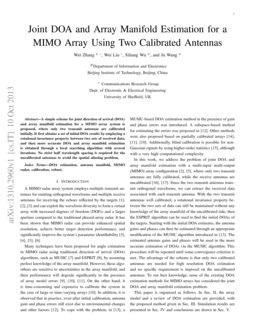 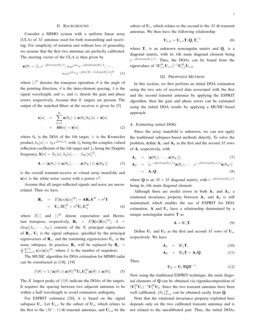 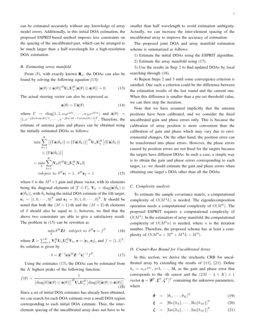 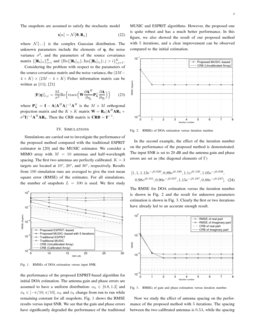 and can exploit the waveform diversity to form a virtual array with increased degrees of freedom (DOFs) and a larger aperture compared to the traditional phased-array radar. It has been shown that MIMO radar can provide enhanced spatial resolution, achieve better target detection performance, and significantly improve the system’s parameter identifiability

Many techniques have been proposed for angle estimation in MIMO radar using traditional direction of arrival (DOA) algorithms, such as MUSIC [7] and ESPRIT [8], by assuming perfect knowledge of the array manifold. However, these algorithms are sensitive to uncertainties in the array manifold, and their performance will degrade significantly in the presence of array model errors [9, 10, 11]. On the other hand, it is time-consuming and expensive to calibrate the system in the case of large or time-varying arrays [10]. In addition, it is observed that in practice, even after initial calibration, antenna gain and phase errors still exist due to environmental changes and other factors [12]. To cope with the problem, in [13], a MUSIC-based DOA estimation method in the presence of gain and phase errors was introduced. A subspace-based method for estimating the errors was proposed in [12]. Other methods were also proposed based on partially calibrated arrays [14, 11, 10]. Additionally, blind calibration is possible for non-Gaussian signals by using higher-order statistics [15], although with a very high computational complexity.

In this work, we address the problem of joint DOA and array manifold estimation with a multi-input multi-output (MIMO) array configuration [2, 5], where only two transmit antennas are fully calibrated, while the receive antennas are uncalibrated [16, 17]. Since the two transmit antennas transmit orthogonal waveforms, we can extract the received data associated with each transmit antenna. With the two transmit antennas well calibrated, a rotational invariance property between the two sets of data can still be maintained without any knowledge of the array manifold of the uncalibrated side; then the ESPRIT algorithm can be used to find the initial DOAs of the targets. Starting with the initial DOA estimates, the antenna gains and phases can then be estimated through an appropriate modification of the MUSIC algorithm introduced in [13]. The estimated antenna gains and phases will be used in the more accurate estimation of DOAs via the MUSIC algorithm. This procedure will be repeated until some convergence criterion is met. The advantage of the scheme is that only two calibrated antennas are needed for high resolution DOA estimation and no specific requirement is imposed on the uncalibrated antennas. To our best knowledge, none of the existing DOA estimation methods for MIMO arrays has considered the joint DOA and array manifold estimation problem.

This paper is organized as follows. In Sec. II, the array model and a review of DOA estimation are provided, with the proposed method given in Sec. III. Simulation results are presented in Sec. IV and conclusions are drawn in Sec. V.

antennas used for both transmitting and receiving. For simplicity of notation and without loss of generality, we assume that the first two antennas are perfectly calibrated. The steering vector of the ULA is then given by

where [⋅]T denotes the transpose operation, θ is the angle of the pointing direction, d is the inter-element spacing, λ is the signal wavelength, and αi and ϕi denote the gain and phase errors, respectively. Assume that K targets are present. The output of the matched filters at the receiver is given by [5]

is the overall transmit-receive or virtual array manifold, and n[n]

is the white noise vector with a power

Assume that all target-reflected signals and noise are uncorrelated. Then we have

where E[⋅] and [⋅]H denote expectation and Hermitian transpose, respectively, Rb=E[b[n]b[n]H], Λ=diag{λ1,⋯,λK} consists of the K

is the signal subspace, specified by the principal eigenvectors of

Rx, and the remaining eigenvectors Un is the noise subspace. In practice, Rx will be replaced by ^Rx=1L∑Ln=1x[n]x[n]H, where L is the number of snapshots.

The MUSIC algorithm for DOA estimation for MIMO radar can be constructed as [18, 19]

The K largest peaks of f(θ) indicate the DOAs of the targets. It requires the spacing between two adjacent antennas to be within a half wavelength to avoid estimation ambiguity.

where Te is an unknown nonsingular matrix and Qe is a diagonal matrix, with its kth main diagonal element being e−j2πdsin(θk)/λ. Thus, the DOAs can be found from the eigenvalues of (UHs,1Us,1)−1UHs,1Us,2.

In this section, we first perform an initial DOA estimation using the two sets of received data associated with the first and the second transmit antennas by applying the ESPRIT algorithm, then the gain and phase errors can be estimated using the initial DOA results by applying a MUSIC-based approach.

Since the array manifold is unknown, we can not apply the traditional subspace-based methods directly. To solve the problem, define A1 and A2 as the first and the second M rows of A, respectively, with

where Q is an M×M diagonal matrix, with e−j2πdsin(θk)/λ being its kth main diagonal element.

Although there are model errors in both A1 and A2, a rotational invariance property between A1 and A2 is still maintained, which enables the use of ESPRIT for DOA estimation. A and Us have a relationship determined by a unique nonsingular matrix T as

Define U1 and U2 as the first and second M rows of Us, respectively. We have

Now using the traditional ESPRIT technique, the main diagonal elements of Q can be obtained via eigendecomposition of (UH1U1)−1UH1U2. Since the two transmit antennas have been well calibrated, {θk}Kk=1 can be obtained easily from Q.

Note that the rotational invariance property exploited here depends only on the two calibrated transmit antennas and is not related to the uncalibrated part. Thus, the initial DOAs can be estimated accurately without any knowledge of array model errors. Additionally, in this initial DOA estimation, the proposed ESPRIT-based method imposes less constraints on the spacing of the uncalibrated part, which can be arranged to be much larger than a half-wavelength for a high-resolution DOA estimation.

From (5), with exactly known Rx, the DOAs can also be found by solving the following equation [13]:

The actual steering vector can also be expressed as

Using the estimates (17), the DOAs can be estimated from the K highest peaks of the following function:

Since a set of initial DOA estimates has already been obtained, we can search for each DOA estimate over a small DOA region corresponding to each initial DOA estimate. Thus, the inter-element spacing of the uncalibrated array does not have to be smaller than half wavelength to avoid estimation ambiguity. Actually, we can increase the inter-element spacing of the uncalibrated array to improve the accuracy of estimation.

The proposed joint DOA and array manifold estimation scheme is summarized as follows:

3) Use the results in Step 2 to find updated DOAs by local searching through (18).

4) Repeat Steps 2 and 3 until some convergence criterion is satisfied. One such a criterion could be the difference between the estimation results of the last round and the current one. When this difference is smaller than a pre-set threshold value, we can then stop the iteration.

In this section, we derive the stochastic CRB for uncalibrated array by extending the results of [11, 21]. Define hi=αiejϕi, i=3, ⋯, M, as the gain and phase error that corresponds to the ith sensor and the (2M−4+K)×1 vector η=[θT,ξT,ζT]T containing the unknown parameters, where

The snapshots are assumed to satisfy the stochastic model

is the complex Gaussian distribution. The unknown parameters include the elements of

Considering the problem with respect to the parameters of the source covariance matrix and the noise variance, the (2M−4+K)×(2M−4+K) Fisher information matrix can be written as [11, 21]

Simulations are carried out to investigate the performance of the proposed method compared with the traditional ESPRIT estimator in [20] and the MUSIC estimator. We consider a MIMO array with M=10 antennas and half-wavelength spacing. The first two antennas are perfectly calibrated. K=3 targets are located at 10∘, 20∘, and 30∘, respectively. Results from 100 simulation runs are averaged to give the root mean square error (RMSE) of the estimates. For all simulations, the number of snapshots L=100 is used.

We first study the performance of the proposed ESPRIT-based algorithm for initial DOA estimation. The antenna gain and phase errors are assumed to have a uniform distribution:

αk∈[0.8,1.2] and ϕk∈[−π/10,π/10]. αk and ϕk change from run to run while remaining constant for all snapshots. Fig. 1 shows the RMSE results versus input SNR. We see that the gain and phase errors have significantly degraded the performance of the traditional MUSIC and ESPRIT algorithms. However, the proposed one is quite robust and has a much better performance. In this figure, we also showed the result of our proposed method with 5 iterations, and a clear improvement can be observed compared to the initial estimation.

In the second example, the effect of the iteration number on the performance of the proposed method is demonstrated. The input SNR is set to 20 dB and the antenna gain and phase errors are set as (the diagonal elements of Γ)

Now we study the effect of antenna spacing on the performance of the proposed method with 5 iterations. The spacing between the two calibrated antennas is 0.5λ, while the spacing between the uncalibrated antennas is set to 2λ for the proposed method, and 0.5λ for the other methods. The other parameters remain the same as in Example 1. The results are shown in Fig. 4. We can see that the proposed ESPRIT-based initial estimation has achieved a higher accuracy compared to Fig. 1, and the performance of the proposed method is much better than the corresponding result of Example 1 and significantly outperforms the other considered algorithms.

A joint DOA and array manifold estimation scheme for a MIMO array system has been proposed, where only two antennas at the transmit side are initially calibrated, while the remaining part of the system is completely uncalibrated. By exploiting the rotational invariance property between two sets of received data associated with the two calibrated antennas, the ESPRIT algorithm is first employed to give a set of initial DOA estimation results, which is then used by the following MUSIC-based algorithm for the joint estimation. Additionally, the proposed scheme does not require the adjacent antenna spacing in the uncalibrated part to be within a half wavelength, which provides further improvement to the estimation.