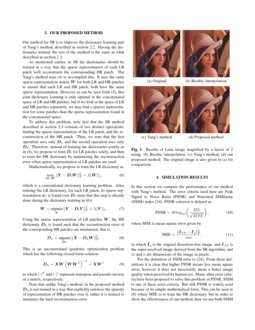 Super-resolution is the problem of reconstructing a high resolution111In this article by resolution we mean spatial resolution. image from one or several low resolution images [1]. It has many potential applications like enhancing the image quality of low-cost imaging sensors (e.g., cell phone cameras) and increasing the resolution of standard definition (SD) movies to display them on high definition (HD) TVs, to name a few.

Prior to SR methods, the usual way to increase resolution of images was to use simple interpolation-based methods such as bilinear, bicubic and more recently the resampling method described in

[2] among many others. However all these methods suffer from blurring high-frequency details of the image especially for large upscaling factors (the amount by which the resolution of image is increased in each dimension). Thus, over the last few years, a large number of SR algorithms have been proposed [3]

. These methods can be classified into two categories: multi-image SR, and single-image SR.

Since the seminal work by Tsai and Huang [4] in 1984, many multi-image SR techniques were proposed [5, 6, 7, 8]. In the conventional SR problem, multiple images of the same scene with subpixel motion are required to generate the HR image. However the performance of these SR methods are only acceptable for small upscaling factors (usually smaller than 2). As the upscaling factor increases, the SR problem becomes severely ill-conditioned and a large number of LR images are needed to recover the HR image with acceptable quality.

To address this problem, example-based SR techniques were developed which require only a single LR image as input [9]. In these methods, an external training database is used to learn the correspondence between manifolds of LR and HR image patches. In some approaches, instead of using an external database, the patches extracted from the LR image itself across different resolutions are used [10]. In [9] Freeman et al. used a Markov network model for super-resolution. Inspired by the ideas in locally linear embedding (LLE) [11], the authors of [12]

used the similarity between manifolds of HR patches and LR patches to estimate HR image patches. Motivated by results of compressive sensing

The rest of this paper is organized as follows. In section 2, Yang’s method for super-resolution via sparse representation is reviewed. In section 3, a flaw in Yang’s method is discussed, and our method to solve this problem is presented. Finally, section 4 is devoted to simulation results.

2 review of super-resolution via sparse representation

yi) and {xi}Ni=1 be the set of corresponding HR patches. In SR using sparse representation, the problem is to train two dictionaries Dl and Dh for the set of LR patches (or a feature of these patches) and HR patches respectively, such that for any LR patch yi, its sparse representation wi over Dl, reconstructs the corresponding HR patch xi using Dh: xi≈Dhwi  [15]. Towards this end, first the dictionary learning problem is briefly reviewed in section  2.1. Then the dictionary learning method for SR proposed in [15] is studied in section  2.2. Finally in section  2.3, it is shown how these trained dictionaries can be used to perform SR on a LR image.

Given a set of signals {xi}Ni=1, dictionary learning is the problem of finding a wide matrix D over which the signals have sparse representation  [19]. This problem is highly related to subspace identification [20]. However, sparsity helps us to turn the subspace recovery to a well-defined problem. This approach has attracted lot of attentions in the last decade and found diverse applications [21, 22, 23]. If we denote the sparse representation of xi over D by wi, the dictionary learning problem can be formulated as

in which the ∥⋅∥0 is the l0-norm which is the number of nonzero components of a vector and ϵ is a small constant which determines the maximum tolerable error in sparse representations. Replacing the l0-norm by l1-norm, Yang et al. in [15] used the following formulation for sparse coding instead of (1)

By defining X≜[x1 ⋯ xN] and W≜[w1 ⋯ wN], it can be rewritten in matrix form as

in which ∥⋅∥F stands for the Frobenius norm. (2) and (1) are not equivalent, but closely related. (2) can be interpreted as minimizing the representation error of signals over the dictionary, while forcing these representations to be sparse by adding a l1-regularization to the error. Therefore λ can be used as a parameter that balances the sparsity and the error; a larger λ results in sparser representations with larger errors.

The key point here is that they have used the same matrix W for sparse representation of both LR and HR patches to make sure that their representation is the same over the dictionaries Dl and Dh. If we define the concatenated space of HR and LR patches:

then joint dictionary training (4) can also be written equivalently as

After training the two dictionaries Dl and Dh, the input LR image can be super-resolved using the following steps:

To address this problem, note first that the SR method described in section 2.3 consists of two distinct operations: finding the sparse representation of the LR patch, and the reconstruction of the HR patch. Then, we note that the first operation uses only Dl, and the second operation uses only Dh. Therefore, instead of training the dictionaries jointly as in (4), we propose to train Dl for LR patches solely, and then to train the HR dictionary by minimizing the reconstruction error when sparse representation of LR patches are used.

Mathematically, we propose to train the LR dictionary as

which is a conventional dictionary learning problem. After training the LR dictionary, for each LR patch, its sparse representation wi is found over Dl (note that this step is already done during the dictionary training in (6))

Using the sparse representation of LR patches W, the HR dictionary Dh is found such that the reconstruction error of the corresponding HR patches are minimized, that is,

This is an unconstrained quadratic optimization problem which has the following closed-form solution:

in which (⋅)T and (⋅)† represent transpose and pseudo-inverse of a matrix, respectively.

Note that unlike Yang’s method, in the proposed method Dh is not trained in a way that explicitly enforces the sparsity of representation of HR patches over it, rather it is trained to minimize the final reconstruction error.

In this section we compare the performance of our method with Yang’s method. The error criteria used here are Peak Signal to Noise Ratio (PSNR) and Structural SIMilarity (SSIM) index [24]. PSNR criterion is defined as

where MSE is mean square error given by

in which Ig is the original distortion-free image, and ISR is the super-resolved image derived from the SR algorithm, and m and n are dimensions of the image in pixels.

For the definition of SSIM refer to [24]. From these definitions it is clear that higher PSNR means less mean square error, however it does not necessarily mean a better image quality when perceived by human eye. Many other error criteria have been proposed to solve this problem of PSNR. SSIM is one of these error criteria. But still PSNR is widely used because of its simple mathematical form. This can be seen in (8

) where MSE is to train the HR dictionary, but in order to show the effectiveness of our method, here we use both SSIM and PSNR to compare images produced by our method with Yang’s method.

To make a fair comparison, the same set of 80000 training data patches sampled randomly from natural images is used to train dictionaries for both Yang’s and our method. The size of LR patches is 5×5 and they are magnified by a factor of 2, i.e. the size of generated HR image patches is 10×10. The LR patches extracted from the input image have a 4 pixel overlap. Dictionary size is fixed at 1024, and λ=0.15 is used for both methods as in [15].

In Fig. 1, simulation results of Yang’s method and proposed method on Lena image can be seen. The original image and the image magnified using bicubic interpolation are also given as references. The PSNRs of these images are 32.79dB, 34.73dB and 34.86dB for bicubic interpolation, Yang’s method and ours respectively. It is clear that the quality of images magnified by SR is much better than the image magnified by bicubic interpolation and the details are more visible, which has resulted in sharper images. But the difference between image (c) and image (d) is not noticeable visually, although the PSNR of image (d) which is super-resolved by our method is about 0.1dB higher.

The SSIMs in Table 1 also confirm that our method is performing better than Yang’s method. The images super-resolved by the proposed method have on average a higher SSIM than images recovered by Yang’s method. Since SSIM is much more consistent with the image quality as it is perceived by human eye compared to PSNR, higher SSIM of images recovered by our method suggests that they also have better visual quality.

In this paper, we presented a new dictionary learning algorithm for example-based SR. The dictionaries were trained from a set of sample LR and HR image patches in order to minimize the final reconstruction error. Simulation results on real images showed the effectiveness of our algorithm in super-resolving images with less error compared to Yang’s method. The average PSNR and average SSIM of images produced by our method were higher than images recovered by Yang’s method. In future, we can extend this work by training the HR dictionary using a better error criterion instead of PSNR. One of the advantages of our method is that training of Dh is separated from Dl in (6) and (8). We can use another error criterion that better represents the image quality like SSIM in (8) without making the training of Dl more complex. Changing the error criterion in each of Yang’s methods will make the optimizations in their algorithms much more complex.