This work is devoted to solve the problem of estimating the carrier frequency offset, phase offset, amplitude, and SNR between two mmWave transceivers. The Cramér-Rao Lower Bound (CRLB) for the different parameters is provided first, as well as the condition for the CRLB to exist, known as Regularity Condition. Thereafter, the problem of finding suitable estimators for the parameters is adressed, for which the proposed solution is the Maximum Likelihood estimator (ML). 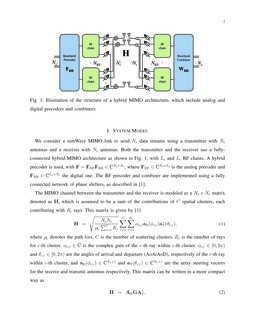 Wireless backhaul is considered to be the key part of the future wireles...
Ye Xue, et al. ∙

The performance of a modulation classifier is highly sensitive to channe...
Onur Ozdemir, et al. ∙

We consider a mmWave MIMO link to send Ns data streams using a transmitter with Nt antennas and a receiver with Nr antennas. Both the transmitter and the receiver use a fully-connected hybrid MIMO architecture as shown in Fig. 1, with Lr and Lt RF chains. A hybrid precoder is used, with F=FRFFBB∈CNt×Ns, where FRF∈CNt×Lt is the analog precoder and FBB∈CLt×Ns the digital one. The RF precoder and combiner are implemented using a fully connected network of phase shifters, as described in [1].

The MIMO channel between the transmitter and the receiver is modeled as a Nr×Nt matrix denoted as H, which is assumed to be a sum of the contributions of C spatial clusters, each contributing with Rc rays. This matrix is given by [1]

where ρL denotes the path loss, C is the number of scattering clusters, Rc is the number of rays for c-th cluster, αc,r∈C is the complex gain of the r-th ray within c-th cluster, ϕc,r∈[0,2π) and θc,r∈[0,2π) are the angles of arrival and departure (AoA/AoD), respectively of the r-th ray within c-th cluster, and aR(ϕc,r)∈CNr×1 and aT(θc,r)∈CNt×1 are the array steering vectors for the receive and transmit antennas respectively. This matrix can be written in a more compact way as

where G∈C∑Cc=1Rc×∑Cc=1Rc is diagonal with non-zero complex entries, and AR∈CNr×∑Cc=1Rc and AT∈CNt×∑Cc=1Rc contain the receive and transmit array steering vectors aR(ϕc,r) and aT(θc,r), respectively. Hd can be approximated using the extended virtual channel representation [mmWavetutorial] as

where Gv∈CGr×Gt is a sparse matrix which contains the path gains of the quantized spatial frequencies in the non zero elements. The dictionary matrices ~AT and ~AR contain the transmitter and receiver array response vectors evaluated on grids of sizes Gt and Gr. Assuming that the receiver applies a hybrid combiner , with WRF∈CNr×Lr the analog combiner, and WBB∈CLr×Ns the baseband combiner, the received signal at discrete time instant n can be written as

We consider that the training sequence can be expressed as s[n]=qt[n], with q∈CLt×1 a spatial filter consisting of normalized QPSK symbols. Let us define α≜D−∗wW∗HFq, α=[α1ejβ1α2ejβ2…αLrejβLr]T and Ωn=ej2πΔfnILr, where Dw∈CLr×Lr is the Cholesky factor of Cw=W∗W, i.e., Cw=D∗wDw. Then, if we stack the N samples of the received signal in (4) we obtain the signal model

such that r∼N(M(α,Δf)t,σ2IMLr). Then, the vector of parameters to be estimated is ξ=[α1…αLrβ1…βLrΔfσ2]T.

Furthermore, the average Signal to Noise Ratio at digital level can be defined as well. Let us define Λ∈CLr×Lr as Λ=diag{α1ejβ1,α2ejβ2,…,αLrejβLr}. Therefore, if the SNR at baseband level is denoted as SNR, it can be written as

which is just the average of the post-combining γi at each RF chain.

For the CRLB to exist, the regularity condition must be fulfilled by the probability density function (pdf) of the data. This condition states

The pdf of the vector r is written as

and the log-likelihood function (LLF) as

Before computing the gradient of the LLF, it is important to note that

since the term inside brackets is also purely imaginary.

Thus, since the regularity condition holds, the CRLB is to be found in the next section.

Since the model for the received signal is Gaussian, the Slepian-Bangs formula can be used to find the elements in the Fisher Information Matrix. This formula is given by [2]

Thus, the elements in the FIM can be found as

The partial derivative of M(α,Δf) is given by

being ei∈RLr a vector of zeros with a single one in the i-th position. Therefore,

For the phase offset parameter,

Then, the Fisher Information for βi yields

For the carrier frequency offset parameter,

For the noise variance,

For the non-diagonal elements in the FIM, it can be checked that all of them are zero-valued except for

Then, the FIM is found to be

Finally, upon inverting the block diagonal matrix F(ξ), the CRLB for the parameters is given by

Finally, the SNR in the i-th RF chain can be distinguished from the average of the individual SNRs of the different signals involved in the problem. If the SNR of the i-th signal is denoted by γi, then

for which, according to the Transformed Parameters Property, the CRLB can be found to be

The last formulas provide a clear insight on how the estimation of γi actually works. For lower values of γi, the CRLB is dominated by the term growing linearly with the parameter, whereas for higher values the CRLB is dominated by the second term, making the estimation of the parameter much harder. The same happens for SNR^, although it actually depends on the different γi for the different streams.

Henceforth, our effort is focused on searching for suitable estimators of these parameters. Owing to the non-linear dependence between the data and the parameters, an efficient estimator cannot be found, in general. The practical approach to follow is to seek the ML estimators for these parameters, for which the next subsection is devoted.

which involves a joint maximization over 2(Lr+1) scalar variables. This problem can be solved in four different steps by splitting the original problem into four interconnected optimization problems.

Iv-a MLE for the Phase Offset

Recall that the LLF is given by

such that the term that depends on βi is the second variable inside brackets. Therefore, the value ^βi that maximizes the function above is found from

The first derivative of the function to maximize yields

Now the following result can be applied.

Lemma. Given two complex numbers, z1, z2, the imaginary part of their product is defined as

Therefore, setting the previous derivative to zero allows us to obtain

which can be interpreted as a matched-filtering operation with the training sequence s[n] after the carrier frequency offset has been corrected. Notice that the ML estimator of βi requires the knowledge of the true value Δf. Since it is impossible to know the exact value of Δf, the ML estimator of Δf is to be substituted in (47) instead, such that the final estimator can be applied in a practical scenario.

Iv-B MLE for the Amplitude

In this subsection we provide a closed-form expression for the amplitude parameters, which have already been denoted as αi. By inspection of the LLF

it can be seen that the terms that depend on this parameter are the two last within brackets. Therefore, the problem of finding αi is formalized as

Taking the first derivative of the objective function yields

From (51), it is clear that the statistic ^αi depends on Δf and βi, similarly as with the estimator of βi. Therefore, the estimators of these parameters are to be substituted in (51) to find the ML estimator.

In this subsection we will find the ML estimator of the carrier frequency offset. In (48), the only term that depends on Δf is the second one. Therefore, the problem of finding the ML estimator for this parameter can be stated as

We can express the objective function in (52) as

in which the statistics ^αi and ^βi are to be substituted. These are given by

where the statistic ^αi follows from substituting (54) into (51). Therefore, (54) and (55) can be substituted into (53) to yield the value of Δf that maximizes the objective function. This can be written as

Accordingly, the ML estimator for the carrier frequency offset can be understood as the bin corresponding to the maximum of the sum of the squared-periodograms of the received signals, after a temporal matched filter. Since the periodogram is defined as the Fourier Transform of the autocorrelation, it is necessary to find its maximum numerically, by using the Fast - Fourier Transform (FFT).

The FFT yields a sampled version of the DTFT, such that there is no guarantee that the carrier frequency offset falls within a specfic integer bin of the FFT. Thus, the three largest points in the FFT can be found and parabolic interpolation can be performed thereafter. The motivation behind this approach is trying to find the real maximum of the function. The actual maximum is not generally found, but an accurate estimate can be found, instead.

This subsection is meant to explaining how parabolic interpolation can be applied to obtain a better estimate of the carrier frequency offset. In general, assume that the shape of the Energy Spectral Density (ESD) of the received stochastic process is the one pictured in Figure 2. Then, the equation of a parabola is given by

where p is the interpolated peak location (in FFT bins). At the three nearest samples, the images of the parabola at these points are

Then, expressing the three samples in terms of the interpolating parabola, it is found that

Therefore, the interpolated peak location in bins is given by

such that the amplitude at that bin is

where fs is the sampling frequency in Hertz and N is the number of points in the FFT.

Iv-E MLE for the Noise Variance

This subsection is devoted to find the MLE for the noise variance parameter, σ2. Recalling the Log-Likelihood Function

the MLE for the noise variance can be easily found from

The condition for the derivative to vanish is that

where ˆM(α,Δf) is the estimate of the matrix M(α,Δf) that models how the signal energy is transferred from the transmitter to the receiver. The estimate ˆM(α,Δf) is computed using the ML estimators of the previous parameters.

Iv-F MLE for the Signal to Noise Ratio

This last subsection is devoted to provide the ML estimator for the SNR metric. To find this statistic, the following property of ML estimation can be applied [2].

Invariance Property of the MLE: The MLE of the parameter α=g(ξ), where the pdf p(x;ξ) is parameterized by ξ, is given by

This nice property allows us to find the MLE for SNR=α2iσ2, which is simply

where ^αi and ˆσ2 are the MLEs for αi and σ2 provided in the previous subsections. As a summary, the ML estimators for the parameters are

To assess the performance of the different estimators, some results are presented hereafter. In the simulations, a range from −15 dB to 10 dB has been considered for SNR, which is a typical range in millimeter wave communications. The amplitude parameters are generated from a U[0,1] distribution. The phase-offsets are generated from a U(0,2π) and the carrier frequency offset is generated as U[−1/2,1/2]. The number of antennas is set to Nt=32 and Nr=32, and the number of RF chains employed at both transmitter and receiver are set to Lt=4 and Lr=4. The training sequence t[n], 0≤n≤N−1 contains normalized QPSK symbols, with N=64 time-domain samples. The results have been averaged over NMC=1000 Monte Carlo realizations.