A fundamental primitive in distributed computing is Reliable Message Transmission (RMT), which refers to the task of correctly sending a message from a party (or player) to another, in a network where some intermediate relays might be controlled by an adversary. We address the problem under the realistic assumption that the topological knowledge of players is restricted to a certain subgraph and specifically study the role of local information exchange in the feasibility of RMT. We employ the General Adversary model of Hirt and Maurer and the recently introduced Partial Knowledge Model which subsume all known models for the adversary and local knowledge respectively. Tight feasibility conditions, naturally involving the network topology, the adversary and the local knowledge of players, are presented. 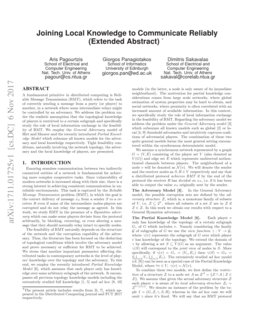 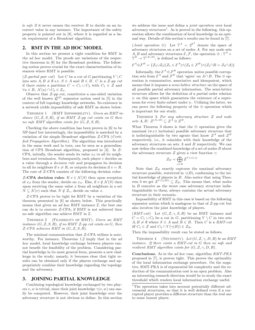 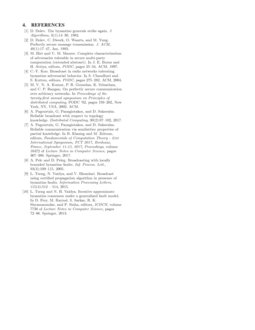 In this paper, we provide a rigorous characterization of consensus solva...
Thomas Nowak, et al. ∙

The Communication Cost of Information Spreading in Dynamic Networks

Consensus is a most fundamental task in distributed computing. This pape...
Ami Paz, et al. ∙

When showing your hand pays off: Announcing strategic intentions in Colonel Blotto games

Given a monocular video of a soccer match, this paper presents a computa...
Adrià Arbués-Sangüesa, et al. ∙

Ensuring seamless communication between two indirectly connected entities of a network is fundamental for achieving more complex cooperative tasks. Since vulnerability of modern networks is increased along with their size, there is a strong interest in achieving consistent communication in unreliable environments. This task is captured by the Reliable Message Transmission problem (RMT), in which the goal is the correct delivery of message xS from a sender S to a receiver R even if some of the intermediate nodes-players are corrupted and do not relay the message as agreed. In this work, we study RMT in the presence of a Byzantine adversary which can make some players deviate from the protocol arbitrarily, by blocking, rerouting, or even altering a message that they should normally relay intact to specific nodes.

The feasibility of RMT naturally depends on the structure of the network and the corruption capability of the adversary. Thus, the literature has been focused on the deduction of topological conditions which involve the adversary model and prove necessary or sufficient for RMT to be achieved. We stress that another important parameter affecting distributed tasks in contemporary networks is the level of players’ knowledge over the topology and the adversary. To this end, we employ the recently introduced Partial Knowledge Model [6], which assumes that each player only has knowledge over some arbitrary subgraph of the network. It encompasses all previous topology knowledge models including the extensively studied full knowledge [1, 5] and ad hoc [8, 10]

models (in the latter, a node is only aware of its immediate neighborhood). The motivation for partial knowledge considerations comes from large scale networks, where global estimation of system properties may be hard to obtain, and social networks, where proximity is often correlated with an increased amount of available information. In this context, we specifically study the role of local information exchange in the feasibility of RMT. Regarding the adversary model we address the problem under the

General Adversary model [3] which subsumes all known models such as global [2] or local [4, 9] threshold adversaries and intuitively captures coalitions of adversarial players. The combination of these two quite general models forms the most general setting encountered within the synchronous deterministic model.

We assume a synchronous network represented by a graph G=(V,E) consisting of the player set V (also denoted as V(G)) and edge set E which represents undirected authenticated channels between players. The neighborhood of a node v will be denoted as N(v). We will denote the sender and the receiver nodes as S,R∈V respectively and say that a distributed protocol achieves RMT if by the end of the protocol the receiver R has decided on xS, i.e. if it has been able to output the value xS originally sent by the sender.

The Adversary Model [3]. In the General Adversary model, the possible corruption sets are defined by the adversary structure Z, which is, a monotone family of subsets of V, i.e. Z⊆2V, where all subsets of a set Z are in Z if Z∈Z. In this work we obtain our results with respect to a General Byzantine adversary.

The Partial Knowledge Model [6]. Each player v only has knowledge of the topology of a certain subgraph Gv of G which includes v. Namely considering the family G of subgraphs of G we use the view function γ:V→G, where γ(v) represents the subgraph of G over which player v has knowledge of the topology. We extend the domain of γ by allowing a set S⊆V(G) as an argument. The value γ(S) will correspond to the joint view of nodes in S. More specifically, if γ(v)=Gv=(Vv,Ev) then γ(S)=GS=(⋃v∈SVv,⋃v∈SEv). The extensively studied ad hoc model (cf. [8]) can be seen as a special case of the Partial Knowledge Model, where ∀v∈V, γ(v)=N(v).

To combine these two models, we first define the restriction of a structure Z to a node set A as ZA={Z∩A∣Z∈Z}. We assume that given the actual adversary structure Z each player v is aware of its local adversary structure Zv=ZV(γ(v)). We denote an instance of the problem by the tuple I=(G,Z,γ,S,R), whereas in the ad hoc case we will omit γ since it’s fixed. We will say that an RMT protocol is safe if it never causes the receiver R to decide on an incorrect value in any instance. The importance of the safety property is pointed out in [8], where it is regarded as a basic requirement of a Broadcast algorithm.

2 RMT in the ad hoc model

In this section we present a tight condition for RMT in the ad hoc model. The proofs are variations of the respective theorems in [6] for the Broadcast problem. The following notion proves crucial for the exact characterization of instances where RMT is possible.

Observe that Z-pp cut, constitutes a one-sided variation of the well known Q(2) separator notion used in [5] in the context of full topology knowledge networks. Its existence in a network yields impossibility of safe RMT as shown below.

Given an RMT instance (G,Z,S,R), if an RMT Z-pp cut exists on G then no safe RMT algorithm exists for (G,Z,S,R).

Checking the above condition has been proven in [6] to be NP-hard but interestingly, the impossibility is matched by a variation of the simple Broadcast algorithm Z-CPA (Certified Propagation Algorithm). The algorithm was introduced in the same work and in turn, can be seen as a generalization of CPA Broadcast algorithm, proposed in [4]. In Z-CPA, initially, the sender sends its value xS to all its neighbors and terminates. Subsequently, each player v decides on a value through a decision rule and propagates its decision to all its neighbors if v≠R, or outputs its decision if v=R. The core of Z-CPA consists of the following decision rules:

Z-CPA proves to be tight for RMT by a variation of the theorem presented in [6] as shown below. This practically means that given an ad hoc RMT instance I, the best one can do is to execute Z-CPA; if RMT is not achieved then no safe algorithm can achieve RMT in I.

The minimal communication that Z-CPA utilizes is noteworthy. For instance, Theorems 1,2 imply that in the ad hoc model, local knowledge exchange between players cannot benefit the feasibility of the problem. Considering partial knowledge in its most general form, presents a new challenge in the study; namely, it becomes clear that tight results can be obtained only if the players exchange and appropriately combine their knowledge regarding the topology and the adversary.

Combining topological knowledge exchanged by two players v,w is trivial, since their joint knowledge γ(v,w) can easily be computed. However, their joint knowledge over the adversary structure is not obvious to define. In this section we address the issue and define a joint operation over local adversary structures111The operation takes into account potentially different adversarial structures, so that it is well defined even if a corrupted player provides a different structure than the real one to some honest player.. As is proved in the following, this operation allows the combination of local knowledge in an optimal way. Details of this section’s results can be found in [7].

Informally, the EA⊕FB operation unites possible corruption sets from EA and FB that ‘agree’ on A∩B. The ⊕ operation is commutative, associative and idempotent, which means that it imposes a semi-lattice structure on the space of all possible partial adversary information. The semi-lattice structure allows for the definition of a partial order relation ≽ on this space which guarantees the existence of a supremum for every finite subset under ≽. Utilizing the latter, we can prove the following property of the ⊕ operation which is important for our study.

For any adversary structure Z and node sets A,B: Z(A∪B)⊆ZA⊕ZB.

Impossibility of RMT in this case is based on the following separator notion which is analogous to that of Z-pp cut but also involves the joint knowledge of players.

Then the impossibility result can be stated as follows.

Let (G,Z,γ,D,R) be an RMT instance. If there exists a RMT-cut in G then no safe and resilient RMT algorithm exists for (G,Z,γ,D,R).

Conclusions. As in the ad hoc case, algorithm RMT-PKA proposed in [7], is proven tight. This proves the optimality of the local information exchange procedure. On the negative, RMT-PKA is of exponential bit complexity and the reduction of the communication cost is an open problem. Also an interesting research direction would be to study the exact threshold which renders local information exchange useful.