Jacobi polynomials and design theory I 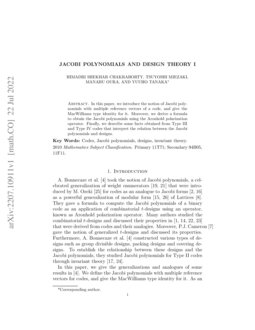 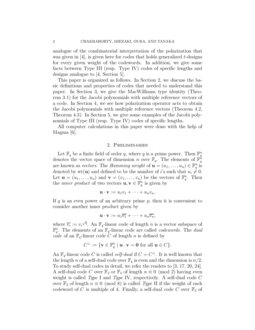 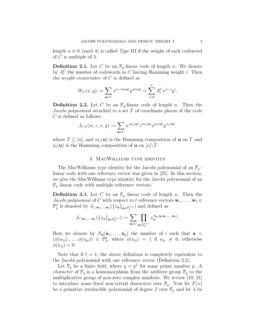 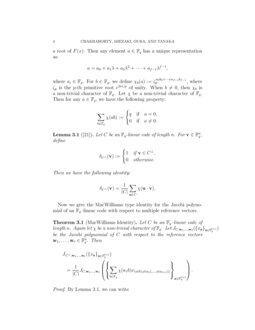 In this work, we introduce the harmonic generalization of the m-tuple we...
Thomas Britz, et al. ∙

In this memorial tribute to Joe Gillis, who taught us that Special Funct...
Shalosh B. Ekhad, et al. ∙

In this paper we construct planar polynomials of the type f_A,B(x)=x(x^q...
Daniele Bartoli, et al. ∙

The generation of fractals and study of the dynamics of polynomials is o...
Suman Joshi, et al. ∙

A Formula for Type III Sums of Squares

A Cartesian Bicategory of Polynomial Functors in Homotopy Type Theory

A. Bonnecaze et al. [4] took the notion of Jacobi polynomials, a celebrated generalization of weight enumerators [20, 22] that were introduced by M. Ozeki [26] for codes as an analogue to Jacobi forms [2, 16] as a powerful generalization of modular form [15, 27] of Lattices [8]. They gave a formula to compute the Jacobi polynomials of a binary code as an application of combinatorial t-designs using an operator, known as Aronhold polarization operator. Many authors studied the combinatorial t-designs and discussed their properties in [1, 14, 23, 24] that were derived from codes and their analogies. Moreover, P.J. Cameron [7] gave the notion of generalized t-designs and discussed its properties. Furthermore, A. Bonnecaze et al. [4] constructed various types of designs such as group divisible designs, packing designs and covering designs. To establish the relationship between these designs and the Jacobi polynomials, they studied Jacobi polynomials for Type II codes through invariant theory [17, 25].

In this paper, we give the generalizations and analogues of some results in [4]. We define the Jacobi polynomials with multiple reference vectors for codes, and give the MacWilliams type identity for it. As an analogue of the combinatorial interpretation of the polarization that was given in [4], is given here for codes that holds generalized t-designs for every given weight of the codewords. In addition, we study some Type III (resp. Type IV) codes of specific lengths, and determine the polynomials that generate the space of Jacobi polynomials for a Type III (resp. Type IV) code with respect to reference vectors of a particular length. Moreover, we observe from the examples that the number of blocks of a packing (resp. covering) design correspond to the coefficients in Jacobi polynomials.

All computer calculations in this paper were done with the help of Magma [6].

Let Fq be a finite field of order q, where q is a prime power. Then Fnq denotes the vector space of dimension n over Fq. The elements of Fnq are known as vectors. The Hamming weight of u=(u1,…,un)∈Fnq is denoted by wt(u) and defined to be the number of i’s such that ui≠0. Let u=(u1,…,un) and v=(v1,…,vn) be the vectors of Fnq. Then the inner product of two vectors u,v∈Fnq is given by

If q is an even power of an arbitrary prime p, then it is convenient to consider another inner product given by

Let C be an Fq-linear code of length n. We denote by ACi the number of codewords in C having Hamming weight i. Then the weight enumerator of C is defined as

Let C be an Fq-linear code of length n. Then the Jacobi polynomial attached to a set T of coordinate places of the code C is defined as follows:

Let C be an Fq–linear code of length n. Then the Jacobi polynomial of C with respect to ℓ reference vectors w1,…,wℓ∈Fnq is denoted by JC,w1,…,wℓ({xa}a∈Fℓ+12) and defined as

Note that if ℓ=1, the above definition is completely equivalent to the Jacobi polynomial with one reference vector (Definition 2.2).

Let Fq be a finite field, where q=pf for some prime number p. A character of Fq is a homomorphism from the additive group Fq to the multiplicative group of non-zero complex numbers. We review [10, 22] to introduce some fixed non-trivial characters over Fq. Now let F(x) be a primitive irreducible polynomial of degree f over Fp and let λ be a root of F(x). Then any element a∈Fq has a unique representation as:

Let C be an Fq-linear code of length n. For v∈Fnq, define

Then we have the following identity:

Now we give the MacWilliams type identity for the Jacobi polynomial of an Fq–linear code with respect to multiple reference vectors.

Let C be an Fq–linear code of length n. Again let χ be a non-trivial character of Fq. Let JC,w1,…,wℓ({xa}a∈Fℓ+12) be the Jacobi polynomial of C with respect to the reference vectors w1,…,wℓ∈Fnq. Then

Hence the proof is completed. ∎

Bonnecaze et al. introduced an operator called polarization operator in [4], and using this operator, they gave a formula to evaluate the Jacobi polynomial of a binary code from the weight enumerator of the code. In this section, we give a generalized form of the polarization operation, and present an application of this operator in the evaluation of the Jacobi polynomial of a non-binary code associated to the multiple reference vectors.

Note that in the case when k=(k) and v=(v), this is precisely the definition of a combinatorial t-(v,k,λ) design or a t-design (in short). We can construct the generalized t-designs from codes as follows.

Again for any positive integer k, let k=(k1,…,kℓ) such that ∑ℓi=1ki=k. Let C be an Fq–linear code of length n. Then

From the above discussion we have the following result. We omit the proof of the theorem since it follows from the above definitions.

Let C be an Fq-linear code of length n. Then the code C−i obtained from C by puncturing at coordinate place i. Now from [22] we have the following lemma.

Let C be a code of length n. Then

If C is generalized t-homogeneous and contains no codeword of weight ≤t then for t=(t1,…,tℓ) such that t1+⋯+tℓ=t we have

Let dj<tj. Then we have

The converse implication follows from the proof of Theorem 4.2. ∎

First, let us recall [4] for the definitions of various types of designs. A design with parameters t-(v,k,(λa11,…,λaNN)) is a collection of k-element subsets called blocks of a v-element set (the varieties) and a partition of the set of all t-tuples into N groups such that every t-set belonging to the ith group (comprising ai such t-sets) is contained in exactly λi blocks. Notice that for N=1 the design coincide with a t-design. A packing (resp. covering) design with parameters t-(v,k,λ) is a design with maxi(λi)=λ (resp. mini(λi)=λ). The maximum (resp. minimum) number of blocks of a packing (resp. covering) design denoted by Dλ(v,k,t) (resp. Cλ(v,k,t)).

A. Bonnecaze et al. [4] showed that the bivariate Molien series plays an important role to describe the relation between the Jacobi polynomials of codes and designs such as group divisible designs, packing (resp. covering) designs. To compute all the invariant polynomials of G

explicitly, it is convenient to classify the invariants by their degrees. We denote the homogeneous part of degree

In the following examples, we study two types of codes over Fq; Type III and Type IV, that hold t-designs with parameters t-(v,k,λ), and we would like to give an upper (resp. lower) bound of Dλ(v,k,t) (resp. Cλ(v,k,t)) of a packing (resp. covering) design corresponding to the parameters. To do so, firstly, we compute the homogeneous part f[d] of f(u,v) corresponding to a code of length d. The coefficients of f[d] determine the number of polynomials that are needed to generate the space of Jacobi polynomials corresponding to the reference sets with a particular cardinality. The number of those Jacobi polynomials determines the number of λ’s of t-(n,k,λa11,…,λaNN). Finally, the coefficient of the term xn−kyk in the weight enumerator of the code obtains the upper (resp. lower) bound of Dλ(v,k,t) (resp. Cλ(v,k,t)). Note that a packing (resp. covering) design is a simple design.

The MacWilliams identity and the modulo 3 congruence condition yield that the weight enumerator of a Type III code remains invariant under the action of group G3 of order 48 which is generated by the following two matrices:

For the case of the group G3, we get from the Magma computations that the denominator of f(u,v) is in the form of d(u)d(v), where

The space of Jacobi polynomials JCIII8,T with |T|=2 may be generated by the two polynomials

Combining these two equations, we obtain 2-designs with parameters

The space of Jacobi polynomials JCIII8,T with |T|=3 may be generated by the two polynomials

which gives packing and covering designs

Since CIII12 holds 5-design, we observe that

The space of Jacobi polynomials JCIII12,T with |T|=6 is generated by the two polynomials