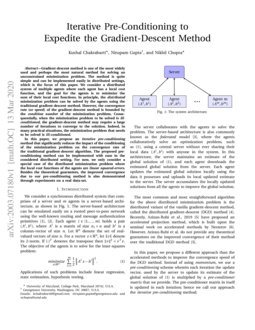 We consider a synchronous system that comprises of a server and m machines, as shown in Fig. 1. Each machine i∈{1,…,m} holds a pair (Ai,bi), where Ai is a matrix of size ni×n and bi

is a column-vector of size

n. Let Rn denote the set of real-valued vectors of size n. For a vector v∈Rn, let ∥v∥ denote its 2-norm. If (⋅)T denotes the transpose then ∥v∥2=vTv.

The objective of the server is to solve for the least-squares problem:

As the server does not know the values of Ai’s and bi’s, it must collaborate with the machines to solve the problem.

The DGD method is an iterative algorithm, in which the server maintains an estimate for a point of minimum of (

1), denoted by x∗, and updates it iteratively by collaborating with the machines as follows. For each iteration t=0,1,…, let x(t) denote the estimate of x∗ at the beginning of iteration t. The initial value x(0) is chosen arbitrarily. In each iteration t, the server broadcasts x(t) to all the machines. Each machine i computes the gradient of the function (1/2)∥∥Aix−bi∥∥2 at x=x(t), denoted by gi(t), and sends it to the server. Note that

Upon receiving the gradients {gi(t)|i=1,…,m} from all the machines, the server updates x(t) to x(t+1) using step-size of constant value δ as follows:

To be able to present the contribution of this paper, we first briefly review the convergence of the DGD method described above.

Let A=[(A1)T,…,(Am)T]T denote the matrix obtained by stacking matrices Ai’s vertically. So, matrix A is of size (∑mi=1ni)×n. If matrix A is full-column rank then we know that there exists δ for which there is a positive value ρ<1 such that [fessler2008image],

The value ρ is commonly referred as the convergence rate. Smaller ρ implies higher convergence speed, and vice-versa. If we let λ and γ

denote the largest and smallest eigenvalues of

ATA, then it is known that [fessler2008image]

The ratio λ/γ is also commonly referred as the condition number of matrix ATA which we denote by κ(ATA) [fessler2008image].

It is possible, however, to improve the convergence rate of DGD beyond (4) by proper pre-conditioning of the gradients in (3), described as follows. Let K, referred as the pre-conditioner, be a square matrix of size n×n. The server now updates its estimate as follows:

If the matrix product KA is positive definite then convergence of (5) can be made linear by choosing δ appropriately, and the smallest possible convergence rate for (5) is given by [fessler2008image]

The pre-conditioner K(t) can be computed in a distributed manner by the master for each iteration t, as is presented in Section II. We show that the iterative process (7) converges faster to the optimum point w∗ than the original DGD algorithm (3). In the experiments, we have also observed that the convergence speed of our proposed algorithm compares favourably to the accelerated projection-based consensus (APC) method proposed in [azizan2019distributed].

In this section, we present our distributed pre-conditioning technique that provably improves the convergence speed of the distributed gradient descent method (3) for solving the distributed least squares problem (1).

To be able to present our pre-conditioning technique, we introduce the following notation.

The pre-conditioned DGD method is described below in Algorithm 1. Note that α,δ are positive valued parameters in the algorithm.

To be able to present the convergence of Algorithm 1, we introduce the following notation.

We make the following assumption. Assumption 1: Assume that the matrix ATA is full rank. Let, λ and γ denote the smallest and largest eigenvalue of ATA, respectively.

If Assumption 1 holds and β>0, then K∗ATA is positive definite, and the largest and the smallest eigenvalues of K∗ATA are λλ+β and γγ+β, respectively.

Proof of Proposition 1 is deferred to Appendix B.

As shown in the next proposition, the smallest and the largest Eigenvalues of K∗ATA has direct influence on the convergence speed of Algorithm 1.

Proof of Proposition 2 is deferred to Appendix C.

According to Proposition 2, the error bound for estimate x(t) evolves with t and after a finite time the rate of convergence is bounded by a constant of value less than 1.

Let the estimate of the optimum point computed by Algorithm 1 and DGD be denoted by x1(t) and x2(t), respectively, after t iterations. Define, z1(t)=x1(t)−x∗ and z2(t)=x2(t)−x∗. For i=1,2, we denote the upper bound on relative error by Ei(t) which is given as follows.

In the following theorem, we present a formal comparison between the convergence speed of Algorithm 1 and the original DGD method (3).

Consider Algorithm 1 and the DGD algorithm (3) with identical initial estimate x(0)∈Rn. If Assumption 1 holds, then there exists τ>0 such that E1(t)<E2(t) for all t>τ.

Proof of Theorem 1 is deferred to Appendix D.

Theorem 1 implies that if the server executes both Algorithm 1 and the original DGD algorithm using the same initial estimate x(0) of x∗, then after a certain number of iterations the upper bound on the distance between the estimates generated by Algorithm 1 is smaller than the original DGD.

In this section, we present the experimental results to verify the obtained theoretical convergence guarantees of Algorithm 1. The matrix A is loaded from one of the real data-sets in SuiteSparse Matrix Collection111https://sparse.tamu.edu.

Example 1. The matrix A is a real symmetric positive definite matrix from the benchmark dataset “bcsstm07” which is part of a structural problem. The dimension of A is 420×420 and its condition number is 7.61∗103. We generate the vector b by setting b=Ax∗ where x∗ is n=420 dimensional vector of one’s. Since A is positive definite, (1) has a unique solution x∗. We split the data (A,b) among m=10 machines, so that ni=42, i=1,…,10.

We apply Algorithm 1 to solve the aforementioned optimization problem. It can be seen that, the speed of the algorithm depends on the parametric choices of β,α,δ (ref. Fig. 1(a)). Also, the algorithm converges to x∗ irrespective of the initial choice of the entries in x(0) and K(−1) (ref. Fig. 1(b)).

The experimental results have been compared with the conventional distributed gradient descent (DGD) [yuan2016convergence] method and the accelerated projection-based consensus (APC) [azizan2019distributed] method (ref. Fig. 3 & 4). We could not find any existing preconditioning technique for the distributed least squares problem (1) in the literature to compare with. We compare the time needed by these three algorithms to reach a relative estimation error (defined as ∥x(t)−x∗∥∥x∗∥) of 10−4. The tuning parameter β has been set at 10 for Algorithm 1. Rest of the algorithm parameters have been set such that the respective algorithms will have their smallest possible convergence rates. Specifically, (α∗=3.17∗10−7,δ∗=1.97) for Algorithm 1, (γ∗=1.08,η∗=12.03) for APC and δ∗=3.17∗10−7 for DGD. We found that, Algorithm 1 and APC respectively need 34.73 and 34.64 seconds to reach relative estimation error 10−4, while DGD takes 247.39 seconds to attain relative error 2.02. The recorded times are average over five runs of the corresponding algorithms. Note that, evaluating the optimal tuning parameters for any of these algorithms requires knowledge about the smallest and largest Eigenvalues of ATA. Clearly, Algorithm 1 performs much faster than DGD and has speed of convergence similar to APC. However, we have formally shown Algorithm 1 to be faster than the DGD algorithm, unlike the APC algorithm which has only been speculated to perform faster.

We notice that, the error norm ∥x(t)−x∗∥ for Algorithm 1 is less than that of DGD from an approximate iteration index t=300 onward (ref. Fig. 2(b)). Since x(0) is same for both of the algorithms, this observation is in agreement with the claim in Theorem 1. In case of the optimal algorithm parameters, APC is faster than Algorithm 1 up to a certain time, 29.32 seconds where the relative error is approximately 4∗10−4, but after that Algorithm 1 decreases faster (ref. Fig. 3(b)).

In this paper, we proposed an algorithm that distributively solves linear least-squares minimization problems over a server-machine network architecture. The novelty of the proposed method lies in incorporating a time-varying pre-conditioning technique into the classical distributed gradient descent method in such a way that has been theoretically shown to boost convergence speed. The computation of the pre-conditioner is done at the server level without requiring any access to the data. In practice, we test the algorithm on a real data-set and get much better performance compared to the classical distributed gradient algorithm regarding the time needed for convergence to the true solution. Although an existing accelerated algorithm performs similar to the proposed method on this problem regarding the speed of convergence, it is not guaranteed theoretically. We, however, has formally shown the proposed algorithm to converge faster than the distributed gradient method.

Consider the Eigen decomposition ATA=UΣUT, where U

is the Eigenvector matrix of

ATA and Λ is a diagonal matrix with the Eigenvalues of ATA in the diagonal. Since K∗:=(ATA+βI)−1 and the identity matrix can be written as I=UUT, we have

where λk>0 are the Eigenvalues of the positive definite matrix ATA. Since ddλk(λkλk+β)>0, the claim follows.

Using (2) and observing that ATA=∑mi=1(Ai)TAi, dynamics (10) can be rewritten as

Then with the largest and the smallest Eigenvalues of K∗ATA obtained in Proposition 1, the claim follows.

where c1>0 depends only on (ρ∗,σ0,ρ∗K,τ) and independent of t. The inequality on the right hand side follows from the first statement in Proposition 2. For DGD, we have ∀t≥0,