Sparse reconstruction approaches using the re-weighted l1-penalty have been shown, both empirically and theoretically, to provide a significant improvement in recovering sparse signals in comparison to the l1-relaxation. However, numerical optimization of such penalties involves solving problems with l1-norms in the objective many times. Using the direct link of reweighted l1-penalties to the concave log-regularizer for sparsity, we derive a simple prox-like algorithm for the log-regularized formulation. The proximal splitting step of the algorithm has a closed form solution, and we call the algorithm 'log-thresholding' in analogy to soft thresholding for the l1-penalty. We establish convergence results, and demonstrate that log-thresholding provides more accurate sparse reconstructions compared to both soft and hard thresholding. Furthermore, the approach can be directly extended to optimization over matrices with penalty for rank (i.e. the nuclear norm penalty and its re-weigthed version), where we suggest a singular-value log-thresholding approach. 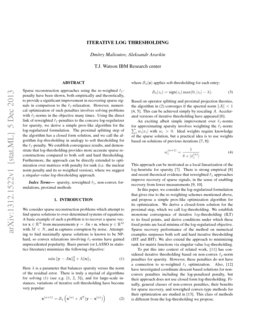 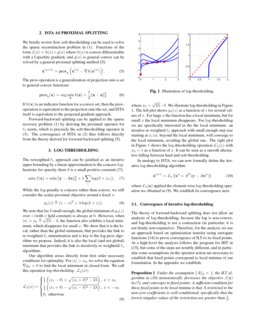 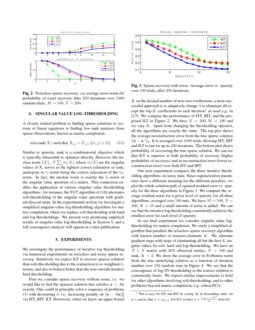 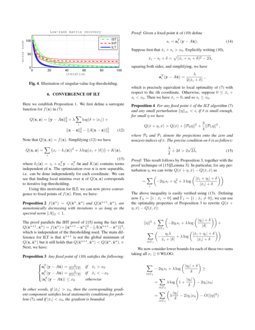 We consider sparse reconstruction problems which attempt to find sparse solutions to over-determined systems of equations. A basic example of such a problem is to recover a sparse vector

x∈RN from measurements y=Ax+n, where y∈RM with M<N, and n captures corruption by noise. Attempting to find maximally sparse solutions is known to be NP-hard, so convex relaxations involving ℓ1-norms have gained unprecedented popularity. Basis pursuit (or LASSO in statistics literature) minimizes the following objective:

Here λ is a parameter that balances sparsity versus the norm of the residual error. There is truly a myriad of algorithms for solving (1) (see e.g. [1, 2, 3]), and for large-scale instances, variations of iterative soft thresholding have become very popular:

Based on operator splitting and proximal projection theories, the algorithm in (2) converges if the spectral norm ∥A∥<1 [4, 5]. This can be achieved simply by rescaling A. Accelerated versions of iterative thresholding have appeared [6].

An exciting albeit simple improvement over ℓ1-norms for approximating sparsity involves weighting the ℓ1-norm: ∑iwi|xi| with wi>0. Ideal weights require knowledge of the sparse solution, but a practical idea is to use weights based on solutions of previous iterations [7, 8]:

[7]. There is strong empirical [8] and recent theoreical evidence that reweighted ℓ1 approaches improve recovery of sparse signals, in the sense of enabling recovery from fewer measurements [9, 10].

In this paper, we consider the log-regularized formulation that gives rise to the re-weighting schemes mentioned above, and propose a simple prox-like optimization algorithm for its optimization. We derive a closed-form solution for the proximal step, which we call log-thresholding. We establish monotone convergence of iterative log-thresholding (ILT) to its fixed points, and derive conditions under which these fixed points are local minima of the log-regularized objective. Sparse recovery performance of the method on numerical examples surpasses both soft and hard iterative thresholding (IST and IHT). We also extend the approach to minimizing rank for matrix functions via singular value log-thresholding.

To put this into context of related work, [11] has considered iterative thresholding based on non-convex ℓp-norm penalties for sparsity. However, these penalties do not have a connection to re-weighted ℓ1 optimization. Also, [12] have investigated coordinate descent based solutions for non-convex penalties including the log-penalized penalty, but their approach does not use closed form log-thresholding. Finally, general classes of non-convex penalties, their benefits for sparse recovery, and reweighed convex-type methods for their optimization are studied in [13]. This class of methods is different from the log-thresholding we propose.

We briefly review how soft-thresholding can be used to solve the sparse reconstruction problem in (1). Functions of the form f(x)=h(x)+g(x) where h(x) is convex differentiable with a Lipschitz gradient, and g(x) is general convex can be solved by a general proximal splitting method [5]:

The prox-operation is a generalization of projection onto a set to general convex functions:

The reweighted-ℓ1 approach can be justified as an iterative upper bounding by a linear approximation to the concave log-heuristic for sparsity (here δ is a small positive constant) [7]:

While the log-penalty is concave rather than convex, we still consider the scalar proximal objective around a fixed x:

We note that for δ small enough, the global minimum of gλ(z) over z (with x held constant) is always at 0. However, when |x|>x0≜√2λ−δ, the function also exhibits a local minimum, which disappears for small x. We show that it is the local, rather than the global minimum, that provides the link to re-weighted ℓ1 minimization and is key to the log-prox algorithm we propose. Indeed, it is also the local (and not global) minimum that provides the link to iteratively re-weighteld ℓ1 algorithms.

Our algorithm arises directly from first order necessary conditions for optimality. For |x|>x0, we solve the equation ∇gλ=0 to find the local minimum in closed-form. We call this operation log-thresholding , Lλ(x):

In analogy to ISTA, we can now formally define the iterative log-thresholding algorithm:

where Lλ(z) applied the element-wise log-thresholding operation we obtained in (9). We establish its convergence next.

The theory of forward-backward splitting does not allow an analysis of log-thresholding, because the log is non-convex, and log-thresholding is not a contraction (in particular, it is not firmly non-expansive). Therefore, for the analysis we use an approach based on optimization transfer using surrogate functions [14] to prove convergence of ILT to its fixed points. At a high-level the analysis follows the program for IHT in [15], but some of the steps are notably different, and in particular some assumptions on the operator action are necessary to establish that fixed points correspond to local minima of our formulation. In the appendix we establish:

Under the assumption ∥A∥2<1, the ILT algorithm in (10) monotonically decreases the objective f(x) in (7), and converges to fixed points. A sufficient condition for these fixed points to be local minima is that A restricted to the non-zero coefficients is well-conditioned, specifically that the lowest singular values of the restriction are greater than 12.

We investigate the performance of iterative log thresholding via numerical experiments on noiseless and noisy sparse recovery. Intuitively we expect ILT to recover sparser solution than soft-thresholding due to the connection to re-weighted-ℓ1 norms, and also to behave better than the non-smooth iterative hard thresholding.

First we consider sparse recovery without noise, i.e. we would like to find the sparsest solution that satisfies y=Ax exactly. One could in principle solve a sequence of problems (1) with decreasing λ, i.e. increasing penalty on ∥y−Ax∥22 via IST, IHT, ILT. Howeveer, when we know an upper bound K on the desired number of non-zero coefficients, a more successful approach is to adaptively change λ to eliminate all except the top-K coefficients in each iteration111 This is easy for IST and IHT by sorting |x| in descending order: let s=sort|x| then λ=sK+1. For ILT we have λ=(xK+1+δ)24 from (9). as used e.g. in [17]. We compare the performance of IST, IHT, and the proposed ILT in Figure 2. We have N=200,M=100 and we vary K. Apart from changing the thresholding operator, all the algorithms are exactly the same. The top plot shows the average reconstruction error from the true sparse solution ∥^x−x∗∥2. It is averaged over 1000 trials allowing IST, IHT and ILT to run for up-to 250 iterations. The bottom plot shows probability of recovering the true sparse solution. We can see that ILT is superior in both probability of recovery (higher probability of recovery) and in reconstruction error (lower reconstruction error) over both IST and IHT.

Our next experiment compares the three iterative thresholding algorithms on noisy data. Since regularization parameters have a different meaning for the different penalties, we plot the whole solution path of squared residual error vs. sparsity for the three algorithms in Figure 3. We compute the average residual norm for a given level of sparsity for all three algorithms, averaged over 100 runs. We have M=100,N=200, K=10 and a small amount of noise is added. We can see that the iterative log thresholding consistently achieves the smallest error for each level of sparsity.

In our final experiment we consider singular value log-thresholding for matrix completion. We study a simplified algorithm that parallels the noiseless sparse recovery algorithm with known number of nonzero-elements K. We alternate gradient steps with steps of eliminating all but the first K singular values by soft, hard and log-thresholding. We have an N×N matrix with 30% observed entries, N=100 and rank, K=2. We show the average error in Frobenius norm from the true underlying solution as a function of iteration number over 100 random runs in Figure 4. We see that the convergence of log-SV-thresholding to the correct solution is consistently faster. We expect similar improvements to hold for other algorithms involving soft-thresholding, and to other problems beyond matrix completion, e.g. robust PCA.

Here we establish Proposition 1. We first define a surrogate function for f(x) in (7):

where ki(z)=zi+aTiy−aTiAz and K(z) contains terms independent of x. The optimization over x is now separable, i.e. can be done independently for each coordinate. We can see that finding local minima over x of Q(x,z) corresponds to iterative log-thresholding.

Using this motivation for ILT, we can now prove convergence to fixed points of f(x). First, we have:

Any fixed point of (10) satisfies the following:

In other words, if |¯xi|>x0, then the corresponding gradient component satisfies local stationarity conditions for problem (7), and if |¯xi|<x0, the gradient is bounded.

squaring both sides, and simplifying, we have

which is precisely equivalent to local optimality of (7) with respect to the ith coordinate. Otherwise, suppose 0≤¯xi+si<x0. Then we have ¯xi=0, and so si≤x0.

For any fixed point ¯x of the ILT algorithm (7) and any small perturbation ∥η∥∞<ϵ, if δ is small enough, for small η we have

where P0 and P1 denote the projections onto the zero and nonzero indices of ¯x. The precise condition on δ is as follows:

Proof: This result follows by Proposition 3, together with the proof technique of [15][Lemma 3]. In particular, for any perturbation η, we can write Q(¯x+η,¯x)−Q(¯x,¯x) as

We now consider lower bounds for each of these two sums taking all xi≥0 WLOG:

Given that (15) holds, the quantity on the last line is positive for η small enough. For Γ1, we have

ILT converges to its fixed points if ∥A∥2<1. Moreover, if the singular values of the restriction of A to the Γ1 columns are greater than 12, these fixed points must be the local minima of (7).

The result follows from the proof technique of [15][Theorem 3]; in particular the sums ∑N−1n=1∥xn+1−xn∥2 are monotonically increasing and bounded, so the iterates {xi} must converge. Finally, we have

This quantity is non-negative provided that the singular values of the restriction of A to Γ1 are greater than 12.