We present an iterative coupling scheme for the numerical approximation of the mixed hyperbolic-parabolic system of fully dynamic poroelasticity. We prove its convergence in the Banach space setting for an abstract semi-discretization in time that allows the application of the family of diagonally implicit Runge-Kutta methods. Recasting the semi-discrete solution as the minimizer of a properly defined energy functional, the proof of convergence uses its alternating minimization. The scheme is closely related to the undrained split for the quasi-static Biot system. 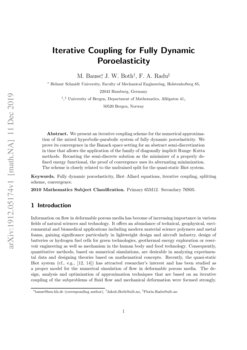 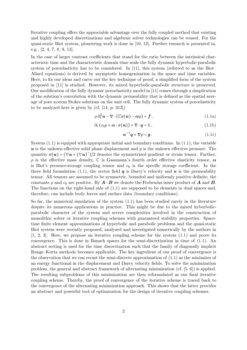 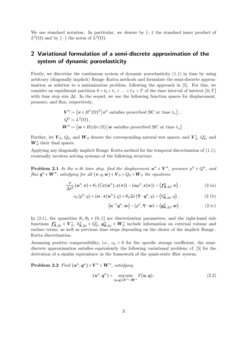 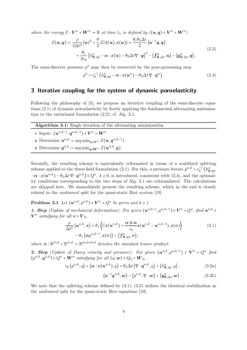 Information on flow in deformable porous media has become of increasing importance in various fields of natural sciences and technology. It offers an abundance of technical, geophysical, environmental and biomedical applications including modern material science polymers and metal foams, gaining significance particularly in lightweight design and aircraft industry, design of batteries or hydrogen fuel cells for green technologies, geothermal energy exploration or reservoir engineering as well as mechanism in the human body and food technology. Consequently, quantitative methods, based on numerical simulations, are desirable in analyzing experimental data and designing theories based on mathematical concepts. Recently, the quasi-static Biot system (cf., e.g., [12, 14]) has attracted researcher’s interest and has been studied as a proper model for the numerical simulation of flow in deformable porous media. The design, analysis and optimization of approximation techniques that are based on an iterative coupling of the subproblems of fluid flow and mechanical deformation were focused strongly. Iterative coupling offers the appreciable advantage over the fully coupled method that existing and highly developed discretizations and algebraic solver technologies can be reused. For the quasi-static Biot system, pioneering work is done in [10, 12]. Further research is presented in, e.g., [2, 4, 7, 8, 9, 13].

In the case of larger contrast coefficients that stand for the ratio between the intrinsical characteristic time and the characteristic domain time scale the fully dynamic hyperbolic-parabolic system of poroelasticity has to be considered. In [11], this system (referred to as the Biot–Allard equations) is derived by asymptotic homogenization in the space and time variables. Here, to fix our ideas and carve out the key technique of proof, a simplified form of the system proposed in [11] is studied. However, its mixed hyperbolic-parabolic structure is preserved. Our modification of the fully dynamic poroelasticity model in [11] comes through a simplication of the solution’s convolution with the dynamic permeability that is defined as the spatial average of pore system Stokes solutions on the unit cell. The fully dynamic system of poroelasticity to be analyzed here is given by (cf. [14, p. 313])

q is Darcy’s velocity and κ is the permeability tensor. All tensors are assumed to be symmetric, bounded and uniformly positive definite, the constants ρ and c0 are positive. By A:B we denote the Frobenius inner product of A and B. The functions on the right-hand side of (1.1) are supposed to be elements in dual spaces and, therefore, can include body forces and surface data (boundary conditions).

So far, the numerical simulation of the system (1.1) has been studied rarely in the literature despite its numerous applications in practice. This might be due to the mixed hyberbolic-parabolic character of the system and severe complexities involved in the construction of monolithic solver or iterative coupling schemes with guaranteed stability properties. Space-time finite element approximations of hyperbolic and parabolic problems and the quasi-static Biot system were recently proposed, analyzed and investigated numerically by the authors in [1, 2, 3]. Here, we propose an iterative coupling scheme for the system (1.1) and prove its convergence. This is done in Banach spaces for the semi-discretization in time of (1.1). An abstract setting is used for the time discretization such that the family of diagonally implicit Runge–Kutta methods becomes applicable. The key ingredient of our proof of convergence is the observation that we can recast the semi-discrete approximation of (1.1) as the minimizer of an energy functional in the displacement and Darcy velocity fields. To solve the minimization problem, the general and abstract framework of alternating minimization (cf. [5, 6]) is applied. The resulting subproblems of this minimization are then reformulated as our final iterative coupling scheme. Thereby, the proof of convergence of the iterative scheme is traced back to the convergence of the alternating minimization approach. This shows that the latter provides an abstract and powerful tool of optimization for the design of iterative coupling schemes.

We use standard notation. In particular, we denote by ⟨⋅,⋅⟩ the standard inner product of L2(Ω) and by ∥⋅∥ the norm of L2(Ω).

Firstly, we discretize the continuous system of dynamic poroelasticity (1.1) in time by using arbitrary (diagonally implicit) Runge–Kutta methods and formulate the semi-discrete approximation as solution to a minimization problem, following the approach in [5]. For this, we consider an equidistant partition 0=t0<t1<…<tN=T of the time interval of interest [0,T] with time step size Δt. In the sequel, we use the following function spaces for displacement, pressure, and flux, respectively,

Applying any diagonally implicit Runge–Kutta method for the temporal discretization of (1.1), eventually involves solving systems of the following structure.

In the n-th time step, find the displacement un∈Vn, pressure pn∈Qn, and flux qn∈Wn, satisfying for all (v,q,w)∈V0×Q0×W0 the equations

In (2.1), the quantities θ1,θ2∈(0,1] are discretization parameters, and the right-hand side functions fnθ,Δt∈V⋆0, hnθ,Δt∈Q⋆0, gnθ,Δt∈W⋆0 include information on external volume and surface terms, as well as previous time steps depending on the choice of the implicit Runge–Kutta discretization.

Assuming positive compressibility, i.e., c0>0 for the specific storage coefficient, the semi-discrete approximation satisfies equivalently the following variational problem; cf. [5] for the derivation of a similar equivalence in the framework of the quasi-static Biot system.

3 Iterative coupling for the system of dynamic poroelasticity

Following the philosophy of [5], we propose an iterative coupling of the semi-discrete equations (2.1) of dynamic poroelasticity by firstly applying the fundamental alternating minimization to the variational formulation (2.2); cf. Alg. 1.

Secondly, the resulting scheme is equivalently reformated in terms of a stabilized splitting scheme applied to the three-field formulation (2.1). For this, a pressure iterate pn,k=c−10(hnθ,Δt −α:ε(un,k)−θ2Δt∇⋅qn,k)∈Qn, k≥0, is introduced, consistent with (2.4), and the optimality conditions corresponding to the two steps of Alg. 1 are reformulated. The calculations are skipped here. We immediately present the resulting scheme, which in the end is closely related to the undrained split for the quasi-static Biot system [10].

We note that the splitting scheme defined by (3.1), (3.2) utilizes the identical stabilization as the undrained split for the quasi-static Biot equations [10].

4 Convergence of the iterative coupling scheme

The identification of the undrained split approach (3.1), (3.2) as the application of the alternating minimization, cf. Alg. 1, to the variational problem (2.2) yields the basis for a simple convergence analysis. For this, we utilize the following abstract convergence result, that is rewritten here in terms of the specific formulation of Alg. 1.

Theorem 4.1 (Convergence of the alternating minimization [6])

for all (v,w)∈V0×W0. Furthermore, assume that the energy functional E of (2.3) satisfies the following conditions:

Let (un,qn)∈Vn×Wn denote the solution to (2.2), and let (un,k,qn,k) denote the corresponding approximation defined by Alg. 1. Then, for all k≥1 it follows that

A simple application of Theorem 4.1 now yields the main result of the work, namely the global linear convergence of the undrained split (3.1), (3.2).

Next, we define a norm |⋅|m on V0 by considering the partial second functional derivative of E with respect to the displacement field,

Similarly, we define a norm |⋅|f on W0 by means of

It directly follows that E is strongly convex wrt. |⋅| with modulus σ=1, and the partial functional derivatives DuE and DqE are uniformly Lipschitz continuous wrt. |⋅|m and |⋅|f with Lipschitz constants Lm=1 and Lf=1, respectively.

By the Hölder inequality we deduce that

Hence, it follows that

On the other hand, applying the triangle inequality and Young’s inequality, and balancing the arising constants properly yields that

Together with (4.3), we also conclude that

The convergence of the sequence of pressures {pn,k}k follows now immediately by a standard inf-sup argument.

The final convergence rate in Corollary 4.2 coincides with the one for the undrained split applied to the quasi-static Biot equations for an homogeneous and isotropic bulk; cf. [12]. In that case, the Biot tensor α reduces to αI for some constant α∈(0,1], and C is defined by the Lamé parameters, such that α:C−1:α=α2Kdr, where Kdr is the drained bulk modulus.