Tensor principal component analysis (TPCA) is a multi-linear extension of principal component analysis which converts a set of correlated measurements into several principal components. In this paper, we propose a new robust TPCA method to extract the princi- pal components of the multi-way data based on tensor singular value decomposition. The tensor is split into a number of blocks of the same size. The low rank component of each block tensor is extracted using iterative tensor singular value thresholding method. The prin- cipal components of the multi-way data are the concatenation of all the low rank components of all the block tensors. We give the block tensor incoherence conditions to guarantee the successful decom- position. This factorization has similar optimality properties to that of low rank matrix derived from singular value decomposition. Ex- perimentally, we demonstrate its effectiveness in two applications, including motion separation for surveillance videos and illumination normalization for face images. 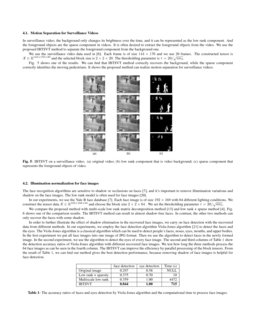 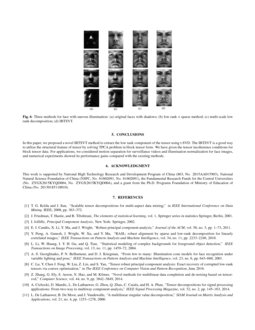 The high-dimensional data, also referred to as tensors, arise naturally in a number of scenarios, including image and video processing, and data mining

The robust PCA (RPCA), as an extension of PCA, is an effective method in matrix decomposition problems [4]. Suppose we have a matrix X∈Rn1×n2 , which can be decomposed as X=L0+S0, where L0 is the low rank component of the matrix and S0 is the sparse component. The RPCA method has been applied to image alignment [5], surveillance video processing [6], illumination normalization for face images [7]

. In most applications, the RPCA method should flatten or vectorize the tensor data so as to solve the problem in the matrix. It doesn’t use the structural feature of the data effectively since the information loss involves in the operation of matricization.

Tensor robust principal component analysis (TRPCA) has been studied in [8, 9] based on the tensor singular value decomposition (t-SVD). The advantage of t-SVD over the existing methods such as canonical polyadic decomposition (CPD) [10] and Tucker decomposition [11] is that the resulting analysis is very close to that of matrix analysis [12]. Similarly, suppose we are given a tensor X∈Rn1×n2×n3 and it can be decomposed into low rank component and sparse component. We can write it as

where L0 denotes the low rank component, and S0 is the sparse component of the tensor. Fig. 1 is the illustration for TRPCA. In [8] the problem (1) is transformed to the convex optimization model:

is the tensor nuclear norm (see section 2 for the definition),

∥S0∥1 denotes the ℓ1-norm. In the paper [9] the problem (1) is transformed to another convex optimization model as:

where ∥S0∥1,1,2 is defined as Σi,j∥S0(i,j,:)∥F. The two methods solve the tensor decomposition problem based on the t-SVD.

The low rank and sparse matrix decomposition has been improved by the [13]. The main idea is incorporating multi-scale structures with low rank methods. The additional multi-scale structures can obtain a more accurate representation than conventional low rank methods. Inspired by this work, we notice that the sparse component in matrix is block-distributed in some applications, e.g. shadow and motion in videos. For these images we find it is more effective to extract the low rank components in a another smaller scale of image data. Here we try to extract low rank components in block tensor data that is stacked by small scale of image data. And when we decompose the tensor data into many small blocks, it is easy to extract the principal component in some blocks that have few sparse components. We model our tensor data as the concatenation of block tensors instead of solving the RPCA problem as a whole big tensor. Fig. 2 is the illustration of concatenation of block tensors.

Based on the above motivation, we decompose the whole tensor into concatenation of blocks of the same size, then we extract low rank component of each block by minimizing the tubal rank of each block tensor. Fig. 3 is the illustration of our method. And we get low rank component of the whole tensor by concatenating all the low rank components of the block tensors. The proposed method can be used to some conventional image processing problems, including motion separation for surveillance videos (Section 4.1) and illumination normalization for face images (Section 4.2). The results of numerical experiments demonstrate that our method outperforms the existing methods in term of accuracy.

In this section, we describe the notations and definitions used throughout the paper briefly [14, 15, 16, 17].

A. For a compact notation we will use ^A = fft (A,[],3) to denote the FFT along the third dimension. In the same way, we can also compute A from ^A using the inverse FFT (IFFT).

where ∙ denotes the circular convolution between two tubes of same size.

Definition 2.4 (orthogonal tensor) [14] A tensor Q is orthogonal if it satisfies

Definition 2.5 (f-diagonal tensor) [14] A tensor is called f-diagonal if each of its frontal slices is a diagonal matrix.

Definition 2.7 (tensor multi-rank and tubal rank) [9] The tensor multi-rank of A∈R\emphn1×\emphn2×\emphn3 is a vector r∈R\emphn3 with its i-th entry as the rank of the i-th frontal slice of ^A, i. e. \emphri=rank(^A(:,:,i)). The tensor tubal rank, denoted by rankt(A), is defined as the number of nonzero singular tubes of S, where S is from A=U∗S∗VT, i. e.

Definition 2.9 (standard tensor basis) [12] The column basis, denoted as ˚ei, is a tensor of size \emphn×1×\emphn3 with its (i,1,1)-th entry equaling to 1 and the rest equaling to 0. Naturally its transpose ˚eTi is called row basis.

We decompose the whole tensor which satisfies the incoherence conditions into many small blocks of the same size. And the third dimension of the block size should be the same as the third dimension of the tensor. That is to say, given an input tensor X∈R\emphn1×\emphn2×\emphn3 and its corresponding block size, we propose a multi-block tensor modeling that models the tensor data X as the concatenation of block tensors. And each block tensor can be decomposed into two components, i.e. Xp=Lp+Sp, p=1,⋯,P, where Lp and Sp denote the low rank component and sparse component of block tensor Xp respectively.

As observed in RPCA, the low rank and sparse decomposition is impossible in some cases [4]. Similarly, we are not able to identify the low rank component and sparse component if the tensor is of both low rank and sparsity. Similar to the tensor incoherence conditions [8], we assume the block tensor data Lp in each block satisfies some block tensor incoherence conditions to guarantee successful low rank component extraction.

The incoherence condition guarantees that for small values of μ, the singular vectors are not sparse. Then the tensor Lp∈R\emphn×\emphn×\emphn3 can be decomposed into low rank component and sparse component.

After we extract the low rank component L=L1⊞L2⊞⋯⊞LP, where ⊞ denotes concatenation operation, we can get the sparse component of the tensor by computing the S=X−L. See Algorithm 2 in details.

for every block. This value is for denoising problem in images or videos, where the noise is uniformly distributed. But for different applications, it should be different from

1/√nn3. Because in these applications, the sparse component in data is not uniformly distributed, such as shadow in face images and motion in surveillance videos.

In this section, we conduct numerical results to show the performance of the method. We apply IBTSVT method on two different real datasets that are conventionally used in low rank model: motion separation for surveillance videos (Section 4.1) and illumination normalization for face images (Section 4.2).

Fig. 5 shows one of the results. We can find that IBTSVT method correctly recovers the background, while the sparse component correctly identifies the moving pedestrians. It shows the proposed method can realize motion separation for surveillance videos.

[7], and it’s important to remove illumination variations and shadow on the face images. The low rank model is often used for face images [20].

We compare the proposed method with multi-scale low rank matrix decomposition method [13] and low rank + sparse method [4]. Fig. 6 shows one of the comparison results. The IBTSVT method can result in almost shadow-free faces. In contrast, the other two methods can only recover the faces with some shadow.

In this paper, we proposed a novel IBTSVT method to extract the low rank component of the tensor using t-SVD. The IBTSVT is a good way to utilize the structural feature of tensor by solving TPCA problem in block tensor form. We have given the tensor incoherence conditions for block tensor data. For applications, we considered motion separation for surveillance videos and illumination normalization for face images, and numerical experiments showed its performance gains compared with the existing methods.