Due to big data analysis ability, machine learning (ML) algorithms are becoming popular for several applications in autonomous vehicles. However, ML algorithms possessinherent security vulnerabilities which increase the demand for robust ML algorithms. Recently, various groups have demonstrated how vulnerabilities in ML can be exploited to perform several security attacks for confidence reduction and random/targeted misclassification, by using the data manipulation techniques. These traditional data manipulation techniques, especially during the training stage, introduce the random visual noise. However, such visual noise can be detected during the attack or testing through noise detection/filtering or human-in-the-loop. In this paper, we propose a novel methodology to automatically generate an "imperceptible attack" by exploiting the back-propagation property of trained deep neural networks (DNNs). Unlike state-of-the-art inference attacks, our methodology does not require any knowledge of the training data set during the attack image generation. To illustrate the effectiveness of the proposed methodology, we present a case study for traffic sign detection in an autonomous driving use case. We deploy the state-of-the-art VGGNet DNN trained for German Traffic Sign Recognition Benchmarks (GTSRB) datasets. Our experimental results show that the generated attacks are imperceptible in both subjective tests (i.e., visual perception) and objective tests (i.e., without any noticeable change in the correlation and structural similarity index) but still performs successful misclassification attacks. 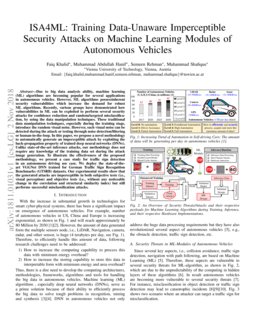 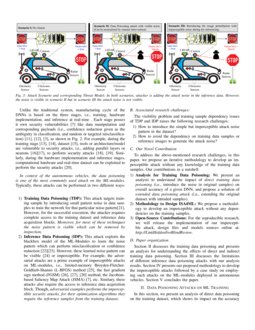 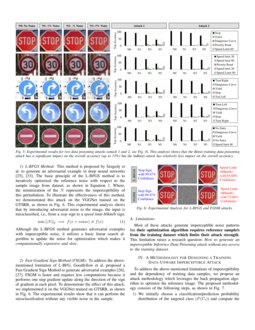 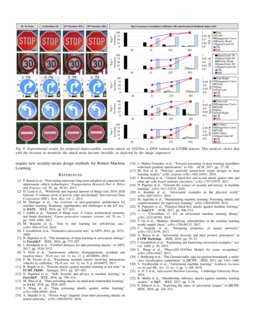 Artificial intelligence (AI) has been a topic of major research for many...
Ibrahim Yilmaz, et al. ∙

With the increase in substantial growth in technologies for smart cyber-physical systems, there has been a significant impact on emergence of autonomous vehicles. For example, number of autonomous vehicles in US, China and Europe is increasing exponential, as shown in Fig. 1 and will reach approximately be 80 Million by 2030 [1][2]. However, the amount of data generated form the multiple sensors node, i.e., LiDAR, Navigation, camera, radar, and other sensor, is huge (4 terabytes per day, see Fig. 1). Therefore, to efficiently handle this amount of data, following research challenges need to be addressed:

Thus, there is a dire need to develop the computing architectures, methodologies, frameworks, algorithms and tools for handling the big data in autonomous vehicles. Machine learning (ML) algorithms , especially deep neural networks (DNNs), serve as a prime solution because of their ability to efficiently process the big data to solve tough problems in recognition, mining and synthesis [3][4]. DNN in autonomous vehicles not only address the huge data processing requirements but they have also revolutionized several aspect of autonomous vehicles [5], e.g., the obstacle detection, traffic sign detection, etc.

Since several key aspects, i.e., collision avoidance, traffic sign detection, navigation with path following, are based on Machine Learning (ML) [5]. Therefore, these aspects are vulnerable to several security threats for ML-algorithm, as shown in Fig. 2, which are due to the unpredictability of the computing in hidden layers of these algorithms [6]. In result autonomous vehicles are becoming more vulnerable to several security threats [7]. For instance, misclassification in object detection or traffic sign detection may lead to catastrophic incidents [8][9][10]. Fig. 3 shows two scenario where an attacker can target a traffic sign for misclassification.

Unlike the traditional system, manufacturing cycle of the DNNs is based on the three stages, i.e., training, hardware implementation, and inference at real-time . Each stage posses it own security vulnerabilities [7] like data manipulation and corresponding payloads (i.e., confidence reduction given as the ambiguity in classification, and random or targeted misclassification) [11, 12, 3], as shown in Fig. 2. For example, during the training stage [13, 14], dataset [15]

In context of the autonomous vehicles, the data poisoning is one of the most commonly used attack on the ML-modules. Typically, these attacks can be performed in two different ways:

To address the above-mentioned research challenges, in this paper, we propose an iterative methodology to develop an imperceptible attack without any knowledge of the training data samples. Our contributions in a nutshell:

For this analysis, we use the following experimental setup:

In this section, we analyze the impact of direct and the modified data poisoning attacks under the assumptions mentioned in experimental setup. We make the following observations from this analysis:

Though, the training data poisoning attacks are effective, they posses the following limitations:

In the development/manufacturing cycle of ML-driven systems, like the traditional systems, the inference stages of ML algorithms come with security vulnerabilities, i.e., manipulation of data acquisition block, communication channels and side-channel analysis to manipulate the inference data [30][31]. Remote cyber-attacks and side-channel attacks come with high computational costs and are therefore less frequently used [22][32]. Therefore, to design/implement the Inference Data Poisoning (IDP) attacks, we need to consider the following challenges:

To address these research challenges, several imperceptible IDPs have been proposed. However, adversarial examples are one of the most effective IDP attacks. Therefore, in this section, we analyze and discuss some of the adversarial examples, i.e, Broyden–Fletcher–Goldfarb–Shanno (L-BFGS) and Fast Gradient Sign Method (FSGM).

This method is proposed by Szegedy et al. to generate an adversarial example in deep neural networks [25, 33]. The basic principle of the L-BFGS method is to iteratively optimized the reference noise with respect to the sample image from dataset, as shown in Equation 1. Where, the minimization of the N represents the imperceptibility of this perturbation. To illustrate the effectiveness of this method, we demonstrated this attack on the VGGNet trained on the GTSRB, as shown in Fig. 6. This experimental analysis shows that by introducing adversarial noise to the image, the input is missclassified, i.e., from a stop sign to a speed limit 60km/h sign.

Although the L-BFGS method generates adversarial examples with imperceptible noise, it utilizes a basic linear search algorithm to update the noise for optimization which makes it computationally expensive and slow.

To address the above-mentioned limitation of L-BFG, Goodfellow et al. proposed a Fast Gradient Sign Method to generate adversarial examples [26, 27]. FSGM is faster and requires less computations because it performs one step gradient update along the direction of the sign of gradient at each pixel. To demonstrate the effect of this attack, we implemented it on the VGGNet trained on GTSRB, as shown in Fig. 6. The experimental results show that it can perform the missclassifcation without any visible noise in the sample.

Iv A Methodology for Designing a Training Data-Unware Imperceptible Attack

To address the above-mentioned limitations of imperceptibility and the dependency of training data samples, we propose an attack methodology which leverages the back propagation algorithm to optimize the reference image. The proposed methodology consists of the following steps, as shown in Fig. 7.

To demonstrate the effectiveness of the proposed methodology, we implemented this methodology on the VGGNet trained for the GTDRB. The experimental results in Fig. 8 show how the imperceptibility is removed with respect to iterations. In this analysis, we identify the following key observations:

In this paper, we proposed a novel training-data unaware methodology to automatically generate an imperceptible adversarial attack by exploiting the back-propagation property of trained deep neural networks (DNN). We successfully demonstrated the attack on an advanced deep neural network, VGGNet, deployed in autonomous driving use case for traffic sign detection. The VGGNet is trained for the German Traffic Sign Recognition Benchmarks (GTSRB) datasets. Our experiments showed that the generated attacks goes unnoticeable in both subjective and objective tests, with close to 100% correlation and structural similarity index w.r.t. the clean input image. We will make all of our design and attack files open-source. Our study shows that such attacks can be very powerful and would require new security-aware design methods for Robust Machine Learning.