Is 'Unsupervised Learning' a Misconceived Term? 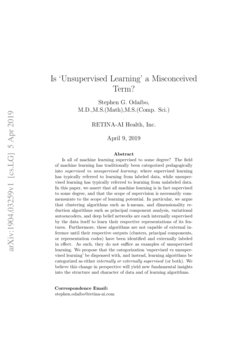 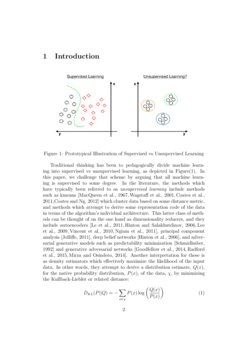 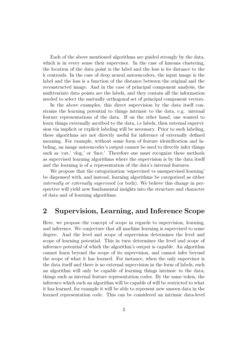 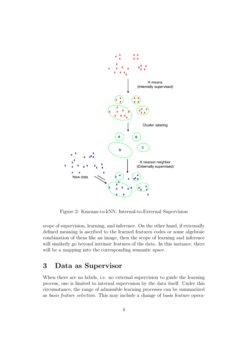 The Next Big Thing(s) in Unsupervised Machine Learning: Five Lessons from Infant Learning

After a surge in popularity of supervised Deep Learning, the desire to r...
Lorijn Zaadnoordijk, et al. ∙

Machine Learning for Neuroimaging with Scikit-Learn

Traditional thinking has been to pedagogically divide machine learning into supervised vs unsupervised learning, as depicted in Figure(1). In this paper, we challenge that scheme by arguing that all machine learning is supervised to some degree. In the literature, the methods which have typically been referred to as unsupervised learning include methods such as kmeans[MacQueen et al., 1967, Wagstaff et al., 2001, Coates et al., 2011, Coates and Ng, 2012] which cluster data based on some distance metric, and methods which attempt to derive some representation code of the data in terms of the algorithm’s individual architecture. This latter class of methods can be thought of on the one hand as dimensionality reducers, and they include autoencoders[Le et al., 2011, Hinton and Salakhutdinov, 2006, Lee et al., 2009, Vincent et al., 2010, Ngiam et al., 2011], principal component analysis[Jolliffe, 2011], deep belief networks[Hinton et al., 2006], and adversarial generative models such as predictability minimization[Schmidhuber, 1992] and generative adversarial networks[Goodfellow et al., 2014, Radford et al., 2015, Mirza and Osindero, 2014]

. Another interpretation for these is as density estimators which effectively maximize the likelihood of the input data. In other words, they attempt to derive a distribution estimate,

, for the native probability distribution,

P(x), of the data, χ, by minimizing the Kullback-Liebler or related distance:

Each of the above mentioned algorithms are guided strongly by the data, which is in every sense their supervisor. In the case of kmeans clustering, the location of the data point is the label and the loss is its distance to the k centroids. In the case of deep neural autoencoders, the input image is the label and the loss is a function of the distance between the original and the reconstructed image. And in the case of principal component analysis, the multivariate data points are the labels, and they contain all the information needed to select the mutually orthogonal set of principal component vectors.

In the above examples, this direct supervision by the data itself constrains the learning potential to things intrinsic to the data, e.g. internal feature representations of the data. If on the other hand, one wanted to learn things externally ascribed to the data, i.e labels, then external supervision via implicit or explicit labeling will be necessary. Prior to such labeling, these algorithms are not directly useful for inference of externally defined meaning. For example, without some form of feature identification and labeling, an image autoencoder’s output cannot be used to directly infer things such as ‘cat,’ ‘dog,’ or ‘face.’ Therefore one must recognize these methods as supervised learning algorithms where the supervision is by the data itself and the learning is of a representation of the data’s internal features.

We propose that the categorization ‘supervised vs unsupervised learning’ be dispensed with, and instead, learning algorithms be categorized as either internally or externally supervised (or both). We believe this change in perspective will yield new fundamental insights into the structure and character of data and of learning algorithms.

Here, we propose the concept of scope in regards to supervision, learning, and inference. We conjecture that all machine learning is supervised to some degree. And the level and scope of supervision determines the level and scope of learning potential. This in turn determines the level and scope of inference potential of which the algorithm’s output is capable. An algorithm cannot learn beyond the scope of its supervision, and cannot infer beyond the scope of what it has learned. For instance, when the only supervisor is the data itself and there is no external supervision in the form of labels, such an algorithm will only be capable of learning things intrinsic to the data; things such as internal feature representation codes. By the same token, the inference which such an algorithm will be capable of will be restricted to what it has learned, for example it will be able to represent new unseen data in the learned representation code. This can be considered an intrinsic data-level scope of supervision, learning, and inference. On the other hand, if externally defined meaning is ascribed to the learned features codes or some algebraic combination of them like an image, then the scope of learning and inference will similarly go beyond intrinsic features of the data. In this instance, there will be a mapping into the corresponding semantic space.

. This may include a change of basis feature operation; or a reduction in span, i.e. a dimensionality reduction. The entire range of data-supervised examples such as kmeans clustering, principal component analysis, autoencoding, deep belief nets, and generative adversarial nets can all be described as basis feature selection operations. The possible inference in this case is essentially limited to expressing new data in the learned feature basis.

Generative adversarial networks (GANs) are an interesting example of an algorithm that is surprisingly externally supervised, but have often been called ‘unsupervised’[Radford et al., 2015]

The entire process of training a GAN is guided by the algorithm designer’s knowledge and labeling of the training data as real and the generator’s output as synthesized.

No algorithms in existence are truly unsupervised. Instead, the scope of supervision of algorithms determine the learning potential, which in turn determines the inference potential of resulting trained model. We found that most algorithms that have been termed ‘unsupervised’ in the literature are supervised by the data, i.e. they they are internally supervised. The learning potential of such data-level scope algorithms is to determine a ‘basis’ feature set to represent the data. The specific mechanisms of data-level scope supervision varied between algorithms, but each presented the data as the standard against which the resulting basis feature set was evaluated.

An algorithm can be termed unsupervised if it is able to learn outside of the scope of its supervision. We however conjecture that this is impossible. For instance, while there is a representation for face, dog, cat, or any other visual object in terms of any appropriately deep neural network architecture, one does not have semblance of intelligence till the representations are mapped to meaning. In other words, one can not make useful and meaningful inference until the derived basis features are mapped to meaningful objects such as ‘face’, ‘cat’, and ‘dog’. This is labeling and makes it an externally supervised problem.

Neural networks learn so many more features that we can currently track or be aware of. For instance, in a standard convolutional neural network image classification problem, our labels are based on certain salient discriminative features, yet the network may utilize other and more (or less) features for discrimination. This makes it clear that the designation of supervision type is based on the intended task. For instance, assigning class labels in an image classification problem suffices to designate the algorithm as ‘supervised’ regardless of how exactly the neural network makes its determination, which may be via a feature different from the label. By the same token, when the task is to find an internal representation of a dataset, then presenting the algorithm with a representative sample of that dataset clearly qualifies as supervision, and in this work we have termed such supervision internal. This is in contrast to external supervision in which the internal ‘basis’ feature are mapped to an external label.

In contrast to previous thinking which categorized supervision as either present (supervised) or absent (unsupervised); in this work, we have argued that supervision is always present in learning algorithms and is either internal, external, or both. We have also pointed out how the scope of supervision determines the scope of learning potential, which in turn determines the scope of inference potential. We anticipate that this change in perspective will yield new fundamental insights into the structure and character of data and of learning algorithms.

I initially posted this idea on Linkedin on Friday March 29th 2019, where it generated good discussion. I’m thankful to discussion participants such as Emml Asimadi, Adebayo Aderibigbe, Idris Azeez, Busayo Coker, Oden Vangelis, and Busayo Olukunle amongst others.