Is There an Analog of Nesterov Acceleration for MCMC?

We formulate gradient-based Markov chain Monte Carlo (MCMC) sampling as optimization on the space of probability measures, with Kullback-Leibler (KL) divergence as the objective function. We show that an underdamped form of the Langevin algorithm perform accelerated gradient descent in this metric. To characterize the convergence of the algorithm, we construct a Lyapunov functional and exploit hypocoercivity of the underdamped Langevin algorithm. As an application, we show that accelerated rates can be obtained for a class of nonconvex functions with the Langevin algorithm. 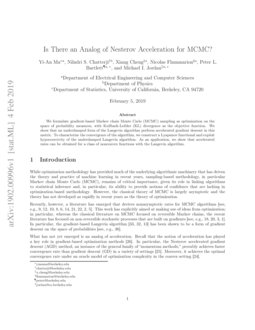 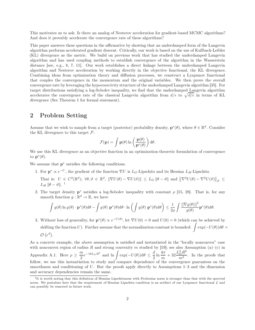 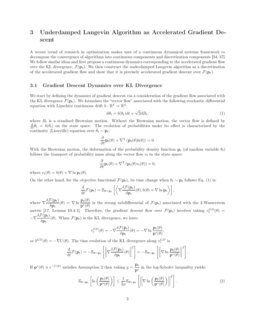 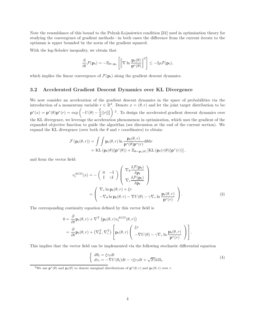 Markov chain Monte Carlo (MCMC) is widely regarded as one of the most im...
Junpeng Lao, et al. ∙

The Wang-Landau Algorithm as Stochastic Optimization and its Acceleration

We show that the Wang-Landau algorithm can be formulated as a stochastic...
Chenguang Dai, et al. ∙

On the robustness of gradient-based MCMC algorithms

We analyse the tension between robustness and efficiency for Markov chai...
Samuel Livingstone, et al. ∙

We propose an accelerated-gradient-based MCMC method. It relies on a mod...
Ruilin Li, et al. ∙

While optimization methodology has provided much of the underlying algorithmic machinery that has driven the theory and practice of machine learning in recent years, sampling-based methodology, in particular Markov chain Monte Carlo (MCMC), remains of critical importance, given its role in linking algorithms to statistical inference and, in particular, its ability to provide notions of confidence that are lacking in optimization-based methodology. However, the classical theory of MCMC is largely asymptotic and the theory has not developed as rapidly in recent years as the theory of optimization.

Recently, however, a literature has emerged that derives nonasymptotic rates for MCMC algorithms [see, e.g., 9, 12, 10, 8, 6, 14, 21, 22, 2, 5]. This work has explicitly aimed at making use of ideas from optimization; in particular, whereas the classical literature on MCMC focused on reversible Markov chains, the recent literature has focused on non-reversible stochastic processes that are built on gradients [see, e.g., 18, 20, 3, 1]. In particular, the gradient-based Langevin algorithm [33, 32, 13] has been shown to be a form of gradient descent on the space of probabilities [see, e.g., 36].

What has not yet emerged is an analog of acceleration. Recall that the notion of acceleration has played a key role in gradient-based optimization methods [26]. In particular, the Nesterov accelerated gradient descent (AGD) method, an instance of the general family of “momentum methods,” provably achieves faster convergence rate than gradient descent (GD) in a variety of settings [25]. Moreover, it achieves the optimal convergence rate under an oracle model of optimization complexity in the convex setting [24].

This motivates us to ask: Is there an analog of Nesterov acceleration for gradient-based MCMC algorithms? And does it provably accelerate the convergence rate of these algorithms?

Assume that we wish to sample from a target (posterior) probability density,

p∗(θ), where θ∈Rd. Consider the KL divergence to this target F:

We use this KL divergence as an objective function in an optimization-theoretic formulation of convergence to p∗(θ).

We assume that p∗ satisfies the following conditions.

As a concrete example, the above assumption is satisfied and instantiated in the “locally nonconvex” case with nonconvex region of radius R and strong convexity m studied by [19]; see also Assumption 1–3 in Appendix A.1. Here ρ≥m2e−16LGR2 and ln∫exp(−U(θ))dθ≤d2ln4πm+32L3GR2m2. In the proofs that follow, we use this instantiation to study and compare dependence of the convergence guarantees on the smoothness and conditioning of U. But the proofs apply directly to Assumptions 1–3 and the dimension and accuracy dependencies remain the same.

. We formulate the “vector flow” associated with the following stochastic differential equation with Lipschitz continuous drift

where Bt is a standard Brownian motion. Without the Brownian motion, the vector flow is defined by ddt¯θt=b(¯θt) on the state space. The evolution of probabilities under its effect is characterized by the continuity (Liouville) equation over ¯θt∼¯pt:

With the Brownian motion, the deformation of the probability density function

θt) follows the transport of probability mass along the vector flow vt in the state space:

On the other hand, for the objective functional F(pt), its time change when θt∼pt follows Eq. (1) is:

where ∇δF(pt)δpt(θ)=∇lnpt(θ)p∗(θ) is the strong subdifferential of F(pt) associated with the 2-Wasserstein metric [17, Lemma 10.4.1]. Therefore, the gradient descent flow over F(pt) involves taking vGDt(θ)=−∇δF(pt)δpt(θ). When F(pt) is the KL divergence, we have:

or bGD(θ)=−∇U(θ). The time evolution of the KL divergence along vGDt is

If p∗(θ)∝e−U(θ) satisfies Assumption 2 then taking g=ptp∗ in the log-Sobolev inequality yields:

Note the resemblance of this bound to the Polyak-Łojasiewicz condition [31] used in optimization theory for studying the convergence of gradient methods—in both cases the difference from the current iterate to the optimum is upper bounded by the norm of the gradient squared.

With the log-Sobolev inequality, we obtain that

which implies the linear convergence of F(pt) along the gradient descent dynamics.

We now consider an acceleration of the gradient descent dynamics in the space of probabilities via the introduction of a momentum variable r∈Rd. Denote x=(θ,r) and let the joint target distribution to be: p∗(x)=p∗(θ)p∗(r)=exp(−U(θ)−ξ2||r||22) 222We use p∗(θ) and pt(θ) to denote marginal distributions of p∗(θ,r) and pt(θ,r) over r.. To design the accelerated gradient descent dynamics over the KL divergence, we leverage the acceleration phenomenon in optimization, which uses the gradient of the expanded objective function to guide the algorithm (see discussion at the end of the current section). We expand the KL divergence (over both the θ and r coordinates) to obtain:

and form the vector field:

The corresponding continuity equation defined by this vector field is

If we only consider the time derivative of the KL divergence, F(pt),

This does not directly provide a linear convergence rate over time. To quantify the convergence rate for this accelerated gradient descent dynamics with KL divergence objective, we design a Lyapunov functional:

where D(pt)=F(pt)=Ept[lnptp∗] is a measurement of how close pt and p∗ are. Here we take the positive definite matrix S=1ρ(2 Id×d1/2 Id×d1/2 Id×d2 Id×d). This form is inspired by the finite dimensional accelerated gradient descent dynamics of [37] and a line of work on hypocoercive diffusion operators [35, 4].

The time evolution of the Lyapunov functional L with respect to the continuous time vector flow vAGDt is:

Since S is positive definite,

Using Assumption 2 and the log-Sobolev inequality in Eq. (2), we directly obtain:

which implies the linear convergence of the continuous process.

AGD has an exact correspondence with the above derivation. For the accelerated gradient descent dynamics for optimization problems defined on a Euclidean space, the original objective function is also expanded to be H(x)=U(θ)+ξ2||r||22 and its dynamics follows the vector field:

To quantify convergence for the strongly convex objective U, we take a Lyapunov function [37] of the form l(x)=H(θ)+⟨∇TxDh(x),S∇xDh(x)⟩, where Dh(x)=12∥θ−θ∗∥2+12∥r∥2 is the squared distance from (θ,r) to the optimum of H, (θ∗,0), and S is a positive definite matrix scaling inversely with the strong convexity parameter m.

Following [8], we design an underdamped Langevin algorithm by discretizing the dynamics of Eq. (4) for τ∈[tn,tn+1] in the following fashion (denote xn=xtn=(θtn,rtn) and define ν=τ−tn):

[8] provide explicit formulas for xτ given xn which we state in Appendix A.2

for completeness. We also take the hyperparameters

The discretized vector field is

It can be observed that this is a higher order discretization scheme for θ than the Euler-Maruyama method.

Other discretization schemes correspond to different choices of ^vτ.

4 Convergence of the Underdamped Langevin Algorithm

From Fig. 1, we see that the underdamped Langevin algorithm, Eq. (17), has a similar profile to accelerated gradient descent; it uses oscillatory behavior to greatly increases the convergence speed. In this section, we explicitly prove that the convergence of the underdamped Langevin algorithm is of order O(√d/ϵ) in terms of KL divergence. Consider the KL divergence from pt(θ) to p∗(θ) as the target functional to minimize:

Assume p∗(θ)∝e−U(θ) satisfies Assumptions 1–3. Then if we run the underdamped Langevin algorithm (17) with initial condition θ0∼N(0,1LGI) for:

If we further assume that function U is locally nonconvex with radius R and global strong convexity m (Assumption 1–3), we obtain explicit dependence of convergence rate on other constants:

To prove convergence of the underdamped Langevin algorithm, we examine its instantaneous change within each step and integrate it. First consider the time evolution of p(xτ|xn) following the discretized vector flow ^vAGDτ for τ∈[tn,tn+1]:

Just like convergence of the continuous process (see Sec. 3.2), we use the same Lyapunov functional, Eq. (6), to characterize convergence of the underdamped Langevin algorithm: . Along the underdamped Langevin algorithm, instantaneous change of the Lyapunov functional L follows the overall vector flow ^vAGDt. It is composed of convergence with the continuous vector flow vAGDt and the discretization error ^vAGDt−vAGDt:

We analyze them separately and combine the analyses to obtain the overall convergence time.

4.1 Convergence of the Continuous Process

We first use Proposition 1 to quantify convergence of L with respect to the continuous vector flow vAGDτ (where MC is defined in Eq. (7)):

The two terms on the right hand side of Eq. (12) are both less than or equal to zero. We will use the first term to cancel the higher order terms in the discretization error and use the second term to drive the convergence of the process (by way of the log-Sobolev inequality).

For the discretization error, we calculate its contribution to dL/dt in the following Proposition 2.

For τ−tn≤18LG, the time evolution of the Lyapunov functional L with respect to the discretization error ^vAGDτ−vAGDτ is:

We first use Young’s inequality to bound the first type of terms:

The main difficulty is in bounding the term

This is the object of the following lemma.

Therefore, we can bound the overall discretization error as: