IPC: A Benchmark Data Set for Learning with Graph-Structured Data

Benchmark data sets are an indispensable ingredient of the evaluation of graph-based machine learning methods. We release a new data set, compiled from International Planning Competitions (IPC), for benchmarking graph classification, regression, and related tasks. Apart from the graph construction (based on AI planning problems) that is interesting in its own right, the data set possesses distinctly different characteristics from popularly used benchmarks. The data set, named IPC, consists of two self-contained versions, grounded and lifted, both including graphs of large and skewedly distributed sizes, posing substantial challenges for the computation of graph models such as graph kernels and graph neural networks. The graphs in this data set are directed and the lifted version is acyclic, offering the opportunity of benchmarking specialized models for directed (acyclic) structures. Moreover, the graph generator and the labeling are computer programmed; thus, the data set may be extended easily if a larger scale is desired. The data set is accessible from <https://github.com/IBM/IPC-graph-data>. 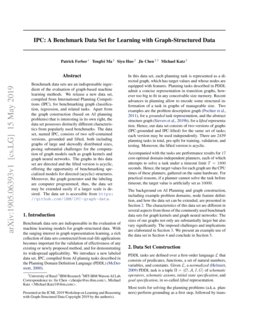 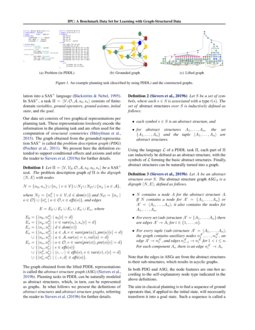 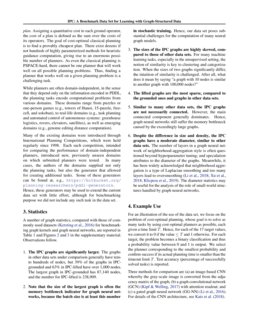 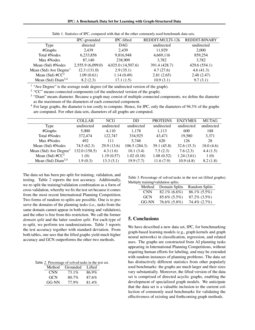 On directed analogues of expander and hyperfinite graph sequences

In recent years there has been a rapid increase in classification method...
Sergei Ivanov, et al. ∙

TUDataset: A collection of benchmark datasets for learning with graphs

Recently, there has been an increasing interest in (supervised) learning...
Christopher Morris, et al. ∙

A Framework for Implementing Machine Learning on Omics Data

We performed a massive evaluation of neural networks with architectures ...
Romuald A. Janik, et al. ∙

Benchmark data sets are indispensable in the evaluation of machine learning models for graph-structured data. With the surging interest in graph representation learning, a rich collection of data sets constructed from real-life applications becomes important for the validation of effectiveness of any existing or newly proposed method, and for demonstrating its widespread applicability. We introduce a new labeled data set, IPC, compiled from AI plannig tasks described in the Planning Domain Definition Language (PDDL) (McDermott, 2000).

In this data set, each planning task is represented as a directed graph, which has target values and whose nodes are equipped with features. Planning tasks described in PDDL admit a concise representation in transition graphs, however too big to fit in any conceivable size memory. Recent advances in planning allow to encode some structural information of a task in graphs of manageable size. Two examples are the problem description graph (Pochter et al., 2011), for a grounded task representation, and the abstract structure graph (Sievers et al., 2019b), for a lifted representation. Hence, our data set consists of two versions of graphs (IPC-grounded and IPC-lifted) for the same set of tasks; each version may be used independently. There are 2439 planning tasks in total, pre-split for training, validation, and testing. Moreover, the lifted version is acyclic.

Accompanied with the tasks are performance results for 17 cost-optimal domain-independent planners, each of which attempts to solve a task under a timeout limit T=1800 seconds. Hence, the target values for each graph are the CPU times of these planners, gathered on the same hardware. For practical reasons, if a planner cannot solve the task before timeout, the target value is artificially set as 10000.

The background on AI Planning and graph construction, including example problem domains, node feature definition, and how the data set can be extended, are presented in Section 2. The characteristics of this data set are different in several aspects from those of the commonly used benchmark data sets for graph kernels and graph neural networks: The sizes of our graphs not only are substantially larger but also vary significantly. The imposed challenges and implications are elaborated in Section 3. We present an example use of the data set in Section 4 and conclude in Section 5.

PDDL tasks are defined over a first-order language L that consists of predicates, functions, a set of natural numbers, variables, and constants. Given L, a normalized (Helmert, 2009) PDDL task is a tuple Π=⟨O,A,I,G⟩ of schematic operators, schematic axioms, initial state specification, and goal specification, in so-called lifted representation.

Most tools for solving the planning problems (a.k.a. planners) perform grounding as a first step, followed by translation into a SAS+ language (Bäckström & Nebel, 1995). In SAS+, a task Π=⟨V,O,A,s0,s⋆⟩ consists of finite-domain variables, ground operators, ground axioms, initial state, and the goal.

Our data set consists of two graphical representations per planning task. These representations losslessly encode the information in the planning task and are often used for the computation of structural symmetries (Shleyfman et al., 2015). The graph obtained from the grounded representation SAS+ is called the problem description graph (PDG) (Pochter et al., 2011). We present here the definition extended to support conditional effects and axioms and refer the reader to Sievers et al. (2019a) for further details.

Let Π=⟨V,Vd,O,A,sd,s0,s⋆⟩ be a SAS+ task. The problem description graph of Π is the digraph ⟨N,E⟩ with nodes

Let S be a set of symbols, where each s∈S is associated with a type t(s). The set of abstract structures over S is inductively defined as follows:

Note that the edges in ASGs are from the abstract structures to their sub-structures, which results in acyclic graphs.

In both PDG and ASG, the node features are one-hot according to the self-explanatory node type indicated in the above definitions.

The aim in classical planning is to find a sequence of ground operators that, if applied to the initial state, will necessarily transform it into a goal state. Such a sequence is called a plan

. Assigning a quantitative cost to each ground operator, the cost of a plan is defined as the sum over the costs of its operators. The goal of cost-optimal classical planning is to find a provably cheapest plan. There exist dozens if not hundreds of highly parameterized methods for heuristic guidance computation, giving rise to an enormous possible number of planners. As even the classical planning is PSPACE-hard, there cannot be one planner that will work well on all possible planning problems. Thus, finding a planner that works well on a given planning problem is a challenging task.

While planners are often domain-independent, in the sense that they depend only on the information encoded in PDDL, the planning tasks encode computational problems from various domains. These domains range from puzzles or one-person games (e.g., towers of Hanoi, 15-puzzle, freecell, and sokoban), to real-life domains (e.g., task planning and automated control of autonomous systems: greenhouse logistics, rovers, elevators, satellites), as well as emerging domains (e.g., genome editing distance computation).

Many of the existing domains were introduced through International Planning Competitions, which were held regularly since 1998. Each such competition, intended for comparing the performance of domain-independent planners, introduced new, previously unseen domains on which submitted planners were tested. In many cases, the authors of the domains supplied not only the planning tasks, but also the generator that allowed for creating additional tasks. Some of these generators can be found at, e.g., https://bitbucket.org/planning-researchers/pddl-generators. Hence, these generators may be used to extend the current data set with little effort, although for benchmarking purpose we did not include any such task in the data set.

A number of graph statistics, compared with those of commonly used datasets (Kersting et al., 2016) for benchmarking graph kernels and graph neural networks, are reported in Table 1 and Figures 2 and 3 in the supplementary material. Observations follow.

For an illustration of the use of the data set, we focus on the problem of cost-optimal planning, whose goal is to solve as many tasks by using cost-optimal planners as possible, each given a time limit T. Hence, for each of the 17 target values, we convert it to 0 if the value ≤T

and 1 otherwise. For each target, the problem becomes a binary classification and thus a probability value between 0 and 1 is output. We select the planner corresponding to the smallest probability and confirm success if its actual planning time is smaller than the timeout limit

Three methods for comparison are (a) an image-based CNN whereby the gray-scale image is converted from the adjacency matrix of the graph; (b) a graph convolutional network (GCN) (Kipf & Welling, 2017) with attention readout; and (c) a gated graph neural network (GG-NN) (Li et al., 2016). For details of the CNN architecture, see Katz et al. (2018).

The data set has been pre-split for training, validation, and testing. Table 2 reports the test accuracy. Additionally, we re-split the training/validation combination as a form of cross validation, whereby we fix the test set because it comes from the most recent International Planning Competition. Two forms of random re-splits are possible. One is to preserve the domains of the planning tasks (i.e., tasks from the same domain cannot appear in both training and validation), and the other is free from this restriction. We call the former domain split and the latter random split. For each type of re-split, we perform ten randomizations. Table 3

reports the test accuracy together with standard deviation. From both tables, one sees that the lifted graphs yield much higher accuracy and GCN outperforms the other two methods.

We have described a new data set, IPC, for benchmarking graph-based learning models (e.g., graph kernels and graph neural networks) in classification, regression, and related uses. The graphs are constructed from AI planning tasks appearing in International Planning Competitions, without requiring human efforts for labeling, and may be extended with random instances of planning problems. The data set has distinctively different statistics from other popularly used benchmarks: the graphs are much larger and their sizes vary substantially. Moreover, the lifted version of the data set is comprised of directed acyclic graphs, enabling the development of specialized graph models. We anticipate that the data set is a valuable inclusion to the current collection of commonly used benchmarks for validating the effectiveness of existing and forthcoming graph methods.