It is a challenging research endeavor to infer causal relationships in multivariate observational time-series. Such data may be represented by graphs, where nodes represent time-series, and edges directed causal influence scores between them. If the number of nodes exceeds the number of temporal observations, conventional methods, such as standard Granger causality, are of limited value, because estimating free parameters of time-series predictors lead to underdetermined problems. A typical example for this situation is functional Magnetic Resonance Imaging (fMRI), where the number of nodal observations is large, usually ranging from 10^2 to 10^5 time-series, while the number of temporal observations is low, usually less than 10^3. Hence, innovative approaches are required to address the challenges arising from such data sets. Recently, we have proposed the large-scale Extended Granger Causality (lsXGC) algorithm, which is based on augmenting a dimensionality-reduced representation of the system's state-space by supplementing data from the conditional source time-series taken from the original input space. Here, we apply lsXGC on synthetic fMRI data with known ground truth and compare its performance to state-of-the-art methods by leveraging the benefits of information-theoretic approaches. Our results suggest that the proposed lsXGC method significantly outperforms existing methods, both in diagnostic accuracy with Area Under the Receiver Operating Characteristic (AUROC = 0.849 vs. [0.727, 0.762] for competing methods, p<10^-8), and computation time (3.4 sec vs. [9.7, 4.8 × 10^3] sec for competing methods) benchmarks, demonstrating the potential of lsXGC for analyzing large-scale networks in neuroimaging studies of the human brain. 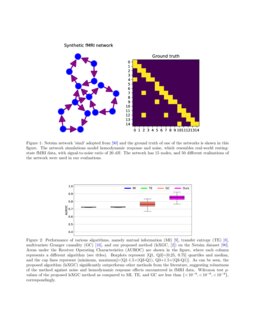 To gain insight into complex systems it is a key challenge to infer nonl...
Axel Wismüller, et al. ∙

It has been shown in the literature that marijuana use is associated wit...
M. Ali Vosoughi, et al. ∙

Causal discovery, beyond the inference of a network as a collection of c...
M. Ali Vosoughi, et al. ∙

We consider the problem of inferring the functional connectivity of a la...
Antoine Messager, et al. ∙

For studying the underlying pathophysiology of neurological and psychiatric disease, functional connectivity among various cortical regions has been identified as an important research subject [Norman et al. [43]]. By providing images with sufficiently high spatial resolution and the hemodynamic response dynamics over a temporal axis, fMRI studies have demonstrated a tremendous potential to serve as a biomarker for neurologic and psychiatric disease [Wismüller and Vosoughi [80], Chockanathan et al. [15], Abidin et al. [3], DSouza et al. [20]]. Currently, most of the diagnosis in brain-related disorders relies on clinical symptom evaluations, such as based on neuropsychological testing. However, there is a need for more objective biomarkers. To this end, more recently, studies have investigated, if such diagnostic information can be extracted non-invasively from brain activity data. Despite promising results, there is scope for improvement, specifically with regards to using more meaningful connectivity analysis approaches [Dadi et al. [16]].

Here, biomarkers from brain imaging using resting-state functional MRI (rs-fMRI) can be derived using Multi-Voxel Pattern Analysis (MVPA) techniques [DSouza et al. [19]]. MVPA is a machine-learning framework that extracts differences in patterns of brain connectivity for discriminating between connectivity profiles of individuals with neurological disorders and healthy individuals. Results of such studies demonstrate that clinically meaningful information can be learned from fMRI data. However, the simple conventional approach of using cross-correlation between time-series does not measure directed connectivity. Hence, more relevant information in the fMRI data may be captured by more sophisticated connectivity measures which retain information about the direction of interdependence between time-series.

Various methods have been proposed to obtain such directional relationships in multivariate time-series data, including transfer entropy [Schreiber [49]] and mutual information [Kraskov et al. [24]]. However, in high-dimensional systems, estimating the system’s underlying density function becomes computationally expensive [Mozaffari and Yilmaz [37]]. Under the Gaussian assumption, transfer entropy is equivalent to Granger causality [Barnett et al. [9]]. However, the computation of multivariate Granger causality for short time series in large-scale problems is challenging [Vosoughi and Wismüller [53], Wismüller et al. [69], Wismüller and Vosoughi [79], Wismüller et al. [70], Wismüller and Vosoughi [80]]. Addressing this challenge, we recently proposed large-scale Extended Granger Causality (lsXGC), which is a method that combines the advantages of dimensionality reduction with the augmentation of a conditional source time-series adopted from the original space. The lsXGC method uses predictive time-series modeling for estimating directed causal relationships among fMRI time-series [Wismüller and Vosoughi [80]], which makes it a suitable method to quantify the uncertainty associated with the stochastic process. This work extends our previous investigation on lsXGC and evaluates its ability to accurately recovering directional information from synthetic rs-fMRI data with known ground truth (GT). Specifically, we compare the performance of lsXGC to conventional multivariate Granger causality (GC) [Granger [21]], mutual information (MI) [Kraskov et al. [24]], and transfer entropy (TE) [Schreiber [49]]. Based on extensive simulations, we investigate the performance of lsXGC at correctly unveiling the underlying dynamics of the synthetic fMRI dataset, even at a significantly lower computational expense when compared to competing methods. Our results qualify lsXGC as a promising candidate for serving as a potential biomarker for brain disease in clinical fMRI studies.

This work is embedded in our group’s endeavor to expedite artificial intelligence in biomedical imaging by means of advanced pattern recognition and machine learning methods for computational radiology and radiomics, e.g., [

Large-scale Extended Granger Causality (lsXGC) has been developed based on 1) the principle of original Granger causality, which quantifies the causal influence of time-series xs on time-series xt by quantifying the amount of improvement in the prediction of xt in presence of xs. 2) the idea of dimension reduction, which resolves the problem of the tackling a under-determined system, which is frequently faced in fMRI analysis, since the number of acquired temporal samples usually is not sufficient for estimating the model parameters [Vosoughi and Wismüller [56], Wismüller et al. [68]].

Consider the ensemble of time-series X∈RN×T, where N is the number of time-series (Regions Of Interest – ROIs) and T the number of temporal samples. Let X=(x1,x2,…,xN)T be the whole multidimensional system and xi∈R1×T a single time-series with i=1,2,…,N, where xi=(xi(1),xi(2),…,xi(T)). In order to overcome the under-determined problem, first X will be decomposed into its first p

Following this, we locally predict X at each time sample t, i.e. X(t)∈RN×1 by calculating an estimate ^Xxs(t)

. To this end, we fit an affine model based on a vector of

and a constant bias vector

Now ^X∖xs(t), which is the prediction of X(t) without the information of xs, will be estimated. The estimation processes is identical to the previous one, with the only difference being that we have to remove the augmented time-series xs and its corresponding column in the PCA coefficient matrix W.

The computation of a lsXGC index is based on comparing the variance of the prediction errors obtained with and without consideration of xs. The lsXGC index fxs→xt , which indicates the influence of xs on xt, can be calculated by the following equation:

Quantitative evaluation of lsXGC and competing algorithms was performed on semi-realistic data of rs-fMRI brain recordings [Smith et al. [50], Löwe et al. [26]], in which noise and the hemodynamic response were included in the data generation process. These data were adopted from Netsim [Smith et al. [50]], and the network ’sim3’ with N=15

was used in our simulations. The hemodynamic responses were generated to model the time-delayed interactions among different brain regions, and, as a result, a smooth signal was generated that resembles recorded fMRI brain signals with an inherent signal-to-noise ratio (SNR) of 20

dB. The advantage of the simulated fMRI is that the ground truth (GT) for network connectivity is known, which is not available for real fMRI datasets. The graph and GT are shown in Fig. 1. Hence, the test results can be used to quantitatively compare different algorithms in the presence of noise hemodynamic response condition, which is not possible for real-world datasets. In line with the literature, we use the Area Under the Receiver Operating Characteristic (AUROC) as a comparison metric. Here, the task is to infer the underlying connectivity between 15 brain regions across 50 network simulation instances.

Results are shown in Fig. 2 and Table. 1. In Fig. 2, the AUROC of the proposed lsXGC algorithm significantly outperforms the competing methods, affirming its ability at accurately detecting the underlying directed network connectivity structure in simulated fMRI signals under conditions of noise and smoothing based on hemodynamic response, resembling the real-world situation. Simulation time and diagnostic accuracy results are listed in Table. 1.

This paper investigates a novel method, large-scale Extended Granger Causality (lsXGC), for discovering relations in high-dimensional dynamical systems involving observational data. The lsXGC method addresses the curse of dimensionality in large-scale dynamic systems by combining dimensionality reduction with data augmentation, namely by augmenting data from the conditional source time-series in the original input space onto a dimensionally reduced state-space representation of the multidimensional time-series system, thus improving prediction quality in a Granger causality setting. Here, we focus on numerical results for learning meaningful representations from synthetic resting-state fMRI data, although there may be a wide scope of other application domains, ranging from neuroscience to climatology and finance. Our results suggest competitive performance of the proposed method in comparison to other widely used techniques from the literature, namely conventional Granger causality, transfer entropy, and mutual information. Most importantly, our method infers network connectivity at a significantly lower computational expense, while accurately identifying causal representations from multidimensional time-series data. We conclude that lsXGC exhibits important advantages over competing methods from the existing literature for inferring directed causal network connectivity in large-scale systems with limited observational data. Specifically, our results suggest that lsXGC may qualify as a promising candidate for serving as a potential biomarker for brain disease in clinical fMRI studies.

This research was partially funded by the American College of Radiology (ACR) Innovation Award “AI-PROBE: A Novel Prospective Randomized Clinical Trial Approach for Investigating the Clinical Usefulness of Artificial Intelligence in Radiology” (PI: Axel Wismüller) and an Ernest J. Del Monte Institute for Neuroscience Award from the Harry T. Mangurian Jr. Foundation (PI: Axel Wismüller). This work was conducted as a Practice Quality Improvement (PQI) project related to American Board of Radiology (ABR) Maintenance of Certificate (MOC) for A.W.