Several audio-visual speech recognition models have been recently proposed which aim to improve the robustness over audio-only models in the present of noise. However, almost all of them ignore the impact of the Lombard effect, i.e., the change in speaking style in noisy environments which aims to make speech more intelligible and affects both the acoustic characteristics of speech and the lip movements. In this paper, we investigate the impact of the Lombard effect in audio-visual speech recognition. To the best of our knowledge, this is the first work which does so using end-to-end deep architectures and presents results on unseen speakers. Our results show that properly modelling Lombard speech is always beneficial. Even if a relatively small amount of Lombard speech is added to the training set then the performance in a real scenario, where noisy Lombard speech is present, can be significantly improved. We also show that the standard approach followed in the literature, where a model is trained and tested on noisy plain speech, provides a correct estimate of the video-only performance and slightly underestimates the audio-visual performance. In case of audio-only approaches, performance is overestimated for SNRs higher than -3dB and underestimated for lower SNRs. 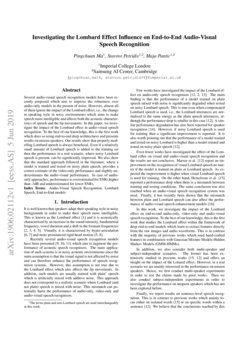 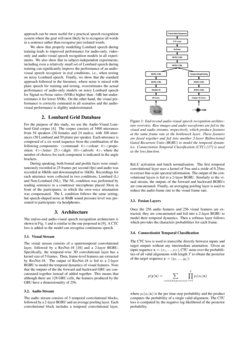 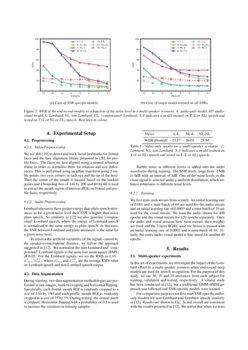 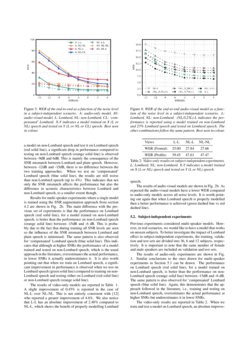 Reverberation from audio reflecting off surfaces and objects in the envi...
Changan Chen, et al. ∙

It is well known that speakers adapt their speaking style in noisy backgrounds in order to make their speech more intelligible. This is known as the Lombard effect [1] and it is acoustically characterised by an increase in the sound intensity, fundamental frequency, vowel duration and a shift in the formant frequencies [2, 3, 4, 5]. Visually, it is characterised by hyper-articulation [6, 7] and more pronounced rigid-head motion [5, 8].

Recently several audio-visual speech recognition models have been presented [9, 10, 11, petridis2018audio] which aim to augment the performance of acoustic speech recognisers. The main application of such systems is in noisy acoustic environments since the main assumption is that the visual signal is not affected by noise and can therefore enhance the performance of speech recognition systems. However, this assumption is not true due to the Lombard effect which also affects the lip movements. In addition, such models are usually trained with plain111The terms plain and non-Lombard speech are used interchangeably in this work. speech which is artificially mixed with additive noise. This approach does not correspond to a realistic scenario where Lombard (and not plain) speech is mixed with noise. This mismatch can potentially harm the performance of audio-only, video-only and audio-visual speech recognisers.

Few works have investigated the impact of the Lombard effect on audio-only speech recognition [12, 2, 13]. The main finding is that the performance of a model trained on plain speech mixed with noise is significantly degraded when tested on noisy Lombard speech. This is true even when compensated Lombard speech is used, i.e., the Lombard utterances are normalised to the same energy as the plain speech utterances, although the performance drop is smaller in this case [12]. A similar performance degradation has also been reported for speaker recognition [14]. However, if noisy Lombard speech is used for training then a significant improvement is reported. It is also worth pointing out that the performance of a model trained and tested on noisy Lombard is higher than a model trained and tested on noisy plain speech [12].

In this work, we investigate the impact of the Lombard effect on end-to-end audio-only, video-only and audio-visual speech recognition. To the best of our knowledge, this is the first work that studies the Lombard effect within the framework of deep end-to-end models which learn to extract features directly from the raw images and audio waveforms. This is in contrast with the majority of previous works which used hand-crafted features in combination with Gaussian Mixture Models-Hidden Markov Models (GMM-HMMs).

In addition, we also consider both multi-speaker and subject-independent scenarios. The former has been extensively studied in previous works [15, 12] and offers an insight on the impact of the Lombard effect. However, in a real scenario we are mainly interested in the performance on unseen speakers. Hence, we first conduct multi-speaker experiments in order to test the claims made by prior works. Then we also conduct subject-independent experiments in order to investigate the performance on unseen speakers which has not been explored before. This is of particular interest since it is known that the degree of the Lombard effect is highly speaker dependent [2, 12].

Finally, we report results on sentence-level speech recognition. This is in contrast to previous works which mainly focus either on isolated words [15] or on specific words within a sentence [12]. We believe that the conclusions reached by this approach can be more useful for a practical speech recognition system where the goal will most likely be to recognise all words in a sentence rather than recognise just isolated words.

For the purpose of this study, we use the Audio-Visual Lombard Gird corpus [4]. The corpus consists of 5400 utterances from 54 speakers (30 females and 24 males), with 100 utterances (50 Lombard and 50 plain) per speaker. Each utterance is composed of a six word sequence from the combination of the following components: <command: 4><colour: 4><preposition: 4><letter: 25><digit: 10><adverb: 4>, where the number of choices for each component is indicated in the angle brackets.

During speaking, both frontal and profile faces were simultaneously recorded at 25 frames per second (fps) and audio was recorded at 48kHz and downsampled to 16kHz. Recordings for each utterance were collected in two conditions, Lombard (L) and Non-Lombard (NL). The NL condition was performed by reading sentences to a condenser microphone placed 30cm in front of the participants, in which the own-voice attenuation was compensated. The L condition follows the same setting, but speech-shaped noise at 80dB sound pressure level was presented to participants via headphones.

The end-to-end audio-visual speech recognition architecture is shown in Fig. 1 and is similar to the one proposed in [9]. A CTC loss is added so the model can recognise continuous speech.

The visual stream consists of a spatiotemporal convolutional layer, followed by a ResNet-18 [18] and a 2-layer BGRU. Specifically, the temporal-wise 3D convolutional layer has a kernel size of 5 frames. Then, frame-level features are extracted by ResNet-18. The output of ResNet-18 is fed to a 2-layer BGRU to model the temporal dynamics of visual features. Note that the outputs of the forward and backward GRU are concatenated together instead of added together. This means that although there are 128 GRU cells, the features produced by the GRU have a dimensionality of 256.

Once the 256 audio features and 256 visual features are extracted, they are concatenated and fed into a 2-layer BGRU to model their temporal dynamics. Then a softmax layer follows which provides the characters probabilities for each frame.

The CTC loss is used to transcribe directly between inputs and target outputs without any intermediate annotation. Given an input sequence

x=(x1,...,xT), CTC sums over the probabilities of all valid alignments with length T to obtain the posterior of the target sequence y=(y1,...,yL):

is the per time-step probability and the product computes the probability of a single valid alignment. The CTC loss is computed by the negative log likelihood of the posterior probability.

We use dlib [19] to detect and track facial landmarks for frontal faces and the face alignment library proposed in [20] for profile faces. The faces are first aligned using a neutral reference frame in order to normalise them for rotation and size differences. This is performed using an affine transform using 5 stable points, two eyes corners in each eye and the tip of the nose. Then the centre of the mouth is located based on the tracked points and a bounding box of 140 by 200 and 80 by 60 is used to extract the mouth region of interest (ROI) on frontal and profile faces, respectively.

To remove the artificial variability of the signals caused by the speaker-to-microphone distance, we follow the approach suggested in [12]. We normalise the non-Lombard and ‘compensated’ Lombard signals to the same root mean square (RMS) of 0.05. For the Lombard signals, we set the RMS to 0.05⋅¯xLrms/¯xNLrms, where ¯xLrms and ¯xNLrms are the average RMS value on Lombard speech and non-Lombard speech corpus.

Babble noise at different levels is added into the audio waveforms during training. The SNR levels range from -15dB to 6dB with an interval of 3dB. One of the noise levels or the clean signal is selected under a uniform distribution, which enhance robustness to different noise levels.

In this set of experiments, we investigate the impact of the Lombard effect in a multi-speaker scenario when end-to-end deep models are used for speech recognition. For the purpose of this study, we use 30, 10 and 10 utterances from each subject for training, validation and testing, respectively. A similar study has been conducted in [12], but a traditional GMM-HMM approach was followed and SNR-specific models were trained.

The results of video-only models are reported in Table  1. A slight improvement of 0.45% is reported in the case of NL-L over NL-NL. This is not entirely consistent with [12] who reported a greater improvement of 4.6%. We also notice that L-L has an absolute improvement of 2.48% compared to NL-L, which shows the benefit of properly modelling Lombard speech.

The results of audio-visual models are shown in Fig. 1(b). As expected the audio-visual models have a lower WER compared to audio-only models across all noise levels. It is worth pointing out again that when Lombard speech is properly modelled then a better performance is achieved (green dashed line vs red dashed line).

Previous experiments considered multi-speaker models. However, in real scenarios, we would like to have a model that works on unseen subjects. To better investigate the impact of Lombard effect in subject-independent experiments, the training, validation and test sets are divided into 36, 6 and 12 subjects, respectively. It is important to note that the same number of female and male speakers are included on validation and test sets.

The video-only results are reported in Table 2. When we train and test a model on Lombard speech, an absolute improvement of 2.84% and 8.16% is observed in frontal faces and profile faces, respectively, over the NL-L scenario. The performance of NL-L is very similar to NL-NL which reveals that the approach followed in the literature (NL-NL) provides a correct estimate of the actual performance (NL-L). We also notice that the performance on profile faces is much worse due to less information being available as well as inaccurate tracking in profile videos.

We gratefully acknowledge the support of NVIDIA Corporation with the donation of the Titan V GPU used for this research. The work of Pingchuan Ma has been funded by the Honda Research Institute.