Recently adversarial attacks on automatic speaker verification (ASV) systems attracted widespread attention as they pose severe threats to ASV systems. However, methods to defend against such attacks are limited. Existing approaches mainly focus on retraining ASV systems with adversarial data augmentation. Also, countermeasure robustness against different attack settings are insufficiently investigated. Orthogonal to prior approaches, this work proposes to defend ASV systems against adversarial attacks with a separate detection network, rather than augmenting adversarial data into ASV training. A VGG-like binary classification detector is introduced and demonstrated to be effective on detecting adversarial samples. To investigate detector robustness in a realistic defense scenario where unseen attack settings exist, we analyze various attack settings and observe that the detector is robust (6.27% EER_det degradation in the worst case) against unseen substitute ASV systems, but it has weak robustness (50.37% EER_det degradation in the worst case) against unseen perturbation methods. The weak robustness against unseen perturbation methods shows a direction for developing stronger countermeasures. 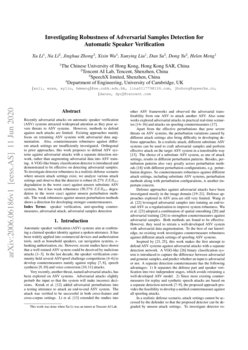 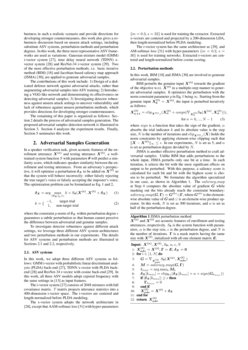 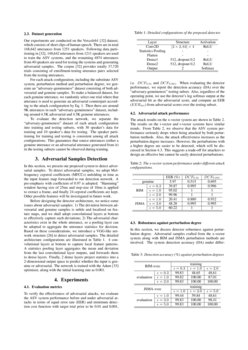 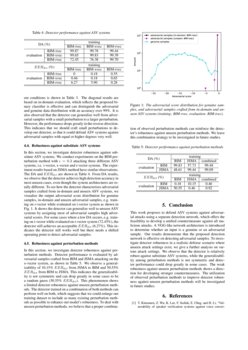 Improving the Adversarial Robustness for Speaker Verification by Self-Supervised Learning

On the Detection of Adaptive Adversarial Attacks in Speaker Verification Systems

Very recently, another threat, named adversarial attacks, has been explored on ASV systems. Adversarial attacks slightly perturb the input so that the system will make incorrect decisions. Kreuk et al. [kreuk2018fooling] added adversarial perturbations into a testing utterance to attack an end-to-end ASV system. The attack was verified to be successful in both cross-feature and cross-corpus settings. Li et al. [li2020adversarial] extended the studies into other ASV frameworks and observed the adversarial transferability from one ASV to attack another ASV. Also some works explored adversarial attacks in practical real-time scenarios [chen2019real, li2020practical, xie2020real] and attacks on spoofing countermeasures [liu2019adversarial].

Defense approaches against adversarial attacks have been investigated mostly in the image domain [song2017pixeldefend, xu2017feature, gong2017adversarial]. Defense approaches explored in ASV area are still very limited. Wang et al. [wang2019adversarial] leveraged adversarial samples into training an end-to-end ASV as a regularization to improve system robustness. Wu et al. [wu2020defense] adopted a combination of spatial smoothing [xu2017feature] and adversarial training [goodfellow2014explaining] to strengthen countermeasures against adversarial samples. Both methods are found to be effective. However, they need to retrain a well-developed ASV system with adversarial data augmentation. To the best of our knowledge, no existing work investigates countermeasure robustness against different attack settings of spoofing ASV systems.

Inspired by [gong2017adversarial, samizade2019adversarial], this work makes the first attempt to defend ASV systems against adversarial attacks with a separate detection network. A VGG-like [nagrani2020voxceleb] binary classification system is introduced to capture the difference between adversarial and genuine samples, and predict whether an input is adversarial or not. A separate detection countermeasure has the following advantages: 1) It separates the defense part and speaker verification into two independent stages, which avoids retraining a well-developed ASV model. 2) Since most existing countermeasures for replay and synthetic speech attacks are based on a separate detection network [williams2019speech, cai2019dku, hanilcci2015classifiers], the proposed approach provides the feasibility to develop a unified countermeasure against all spoofing attacks.

In a realistic defense scenario, attack settings cannot be accessed by the defender so that the proposed detector can be degraded by unseen attack settings. To investigate detector robustness in such a realistic scenario and provide directions for developing stronger countermeasures, this work also gives a robustness discussion based on unseen attack settings, including substitute ASV systems, perturbation methods and perturbation degrees. In this work, the three most representative ASV frameworks are used as variations: Gaussian mixture model (GMM) i-vector system

The contributions of this work include: 1) Design of a dedicated defense network against adversarial attacks, rather than augmenting adversarial samples into ASV training; 2) Introducing a VGG-like network and demonstrating its effectiveness on detecting adversarial samples; 3) Investigating detector robustness against unseen attack settings to uncover vulnerability and lack of robustness against unseen perturbation methods, which provides directions for developing stronger countermeasures.

The remaining of this paper is organized as follows: Section 2 details the process of adversarial samples generation. The proposed adversarial samples detection network is illustrated in Section 3. Section 4 analyzes the experiment results. Finally, Section 5 summaries this work.

In a speaker verification task, given acoustic features of the enrollment utterance X(e) and testing utterance X(t), a well-trained system function S with parameters θ will predict a similarity score, which indicates speaker similarity between the enrollment and testing utterances. From an adversary’s perspective, it will optimize a perturbation δX to be added on X(t) so that the system will behave incorrectly: either falsely rejecting the true target’s voice or falsely accepting the imposter’s voice. The optimization problem can be formulated as Eq. 1 and 2,

where the constraint p-norm of δX within perturbation degree ϵ guarantees a subtle perturbation so that human cannot perceive the difference between adversarial and genuine samples.

The i-vector system [dehak2010front] consists of 2048 mixtures with full covariance matrix. T matrix projects utterance statistics into a 400-dimension i-vector space. The i-vectors are centered and length-normalized before PLDA modeling.

The x-vector system adopts the network architecture in [snyder2018x], except that AAM-softmax loss [xiang2019margin] with hyper-parameters {m=0.3, s=32} is used for training the extractor. Extracted x-vectors are centered and projected by a 200-dimension LDA, then length-normalized before PLDA modeling.

The r-vector system has the same architecture as [zeinali2019but], and AM-softmax loss [xiang2019margin] with hyper-parameters {m=0.2, s=30} is used for training networks. Extracted r-vectors are centered and length-normalized before cosine scoring.

BIM perturbs the genuine input X(t) towards the gradient of the objective w.r.t. X(t) in a multiple-step manner to generate adversarial samples. It optimizes the perturbation with the norm constraint parameter p in Eq. 1 being ∞. Starting from the genuine input X(t)0=X(t), the input is perturbed iteratively as follows:

where sign is a function that takes the sign of the gradient, α absorbs the trial indicator k and its absolute value is the step size, N is the number of iterations and clipX(t),ϵ(X) holds the norm constraints by applying element-wise clipping such that ∥X−X(t)∥∞≤ϵ. In our experiments, N is set as 5, and α is set as perturbation degree devided by N.

JSMA is another effective perturbation method to craft adversarial samples. Unlike BIM that adds perturbations to the whole input, JSMA perturbs only one bit at a time. In each iteration, it selects the bit with the most significant effects on output to be perturbed. With this purpose, a saliency score is calculated for each bit and bit with the highest score is chosen to be perturbed. We formulate the algorithm specialized in our case, as shown in Algorithm 1. The saliency_map at Step 4 computes the absolute value of gradient G while masking out the bits already reach the constraint boundary: saliency_map(G,Γ)=Gabs⊙Γ, where Gabs is the element-wise absolute value of G and ⊙ is an element-wise product operator. In this work, N is set as 300 iterations, and α is set as half of the perturbation degree.

For each attack configuration, including the substitute ASV system, perturbation method and perturbation degree, we generate an “adversary-genuineness” dataset consisting of both adversarial and genuine samples. To make a balanced dataset, for each genuine utterance, we randomly select one trial where that utterance is used to generate an adversarial counterpart according to the attack configuration by Eq. 1. Then there are around 9K utterances in each “adversary-genuineness” dataset, including around 4.5K adversarial and 4.5K genuine utterances.

To evaluate the detection network, we separate the “adversary-genuineness” dataset of each attack configuration into training and testing subsets, with 30 speaker’s data for training and 10 speaker’s data for testing. The speaker partitioning for training and testing is consistent among all attack configurations. This guarantees that source utterances (either a genuine utterance or an adversarial utterance generated from it) in the testing subsets cannot be observed during training.

In this section, we present our proposed system to detect adversarial samples. To detect adversarial samples, we adopt Mel-frequency cepstral coefficients (MFCCs) unfolding in time as the input feature map forwarded to our detection network. A pre-emphasis with coefficient of 0.97 is adopted. “Hamming” window having size of 25ms and step-size of 10ms is applied to extract a frame, and finally 24 cepstral coefficients are kept. Other possible features will be investigated in future work.

Before designing the detector architecture, we notice some issues about adversarial samples: 1) The deviation between adversarial and genuine samples is subtle and localized on feature maps, and we shall adopt convolutional layers at bottom to effectively capture such deviations; 2) The adversarial characteristics exist in the whole utterance, so a pooling layer can be adopted to aggregate the utterance statistics for decision. Based on these considerations, we introduce a VGG-like network structure [nagrani2020voxceleb] to detect adversarial samples. The detailed architecture configurations are illustrated in Table 1. 4 convolutional layers at bottom to capture local feature patterns. A statistics pooling layer aggregates the mean and deviation from the last convolutional layer outputs, and forwards them to dense layers. Finally, 2 dense layers project statistics into a 2-dimensional output space to predict whether the input is genuine or adversarial. The network is trained with the Adam [kingma2014adam] optimizer, along with the initial learning rate as 0.001.

The attack results on the x-vector system are shown in Table 2. The results on the i-vector and r-vector systems have similar trends. From Table 2, we observe that the ASV system performance seriously drops when being attacked by both perturbation methods. Also, the attack effectiveness increases as the perturbation degree increases. However, the perturbations with a higher degree are easier to be detected, which will be discussed in Section 4.3. This suggests a trade-off for attackers to design an effective but cannot be easily detected perturbations.

In this section, we discuss detector robustness against perturbation degree. Adversarial samples crafted from the x-vector system along with BIM and JSMA perturbation methods are involved. The system detection accuracy (DA) under different conditions is shown in Table 3

. The diagonal results are based on in-domain evaluation, which reflects the proposed binary classifier is effective and can distinguish the adversarial and genuine data distribution with an accuracy over 99%. It is also observed that the detector can generalize well from adversarial samples with a small perturbation to a larger perturbation. However, the performance drops greatly in the reverse direction. This indicates that we should craft small perturbations to develop our detector, so that it could defend ASV systems against adversarial samples with equal or higher degrees very well.

This work proposes to defend ASV systems against adversarial attacks using a separate detection network, which offers the feasibility to develop a unified countermeasure against all malicious attacks. A VGG-like network architecture is introduced to determine whether an input is a genuine or an adversarial sample. Our results demonstrate that the proposed detection network is effective on detecting adversarial samples. To investigate detector robustness in a realistic defense scenario where unseen attack settings exist, we give a further analysis on various attack settings. We observe that the detector is relatively robust against substitute ASV systems, while the generalizability among perturbation methods is not symmetric and detector performance could drop greatly in some cases. The weak robustness against unseen perturbation methods shows a direction for developing stronger countermeasures. The utilization of observed perturbation methods to improve detector robustness against unseen perturbation methods will be investigated in future studies.