Reversible deep networks provide useful theoretical guarantees and have proven to be a powerful class of functions in many applications. Usually, they rely on analytical inverses using dimension splitting, fundamentally constraining their structure compared to common architectures. Based on recent links between ordinary differential equations and deep networks, we provide a sufficient condition when standard ResNets are invertible. This condition allows unconstrained architectures for residual blocks, while only requiring an adaption to their regularization scheme. We numerically compute their inverse, which has O(1) memory cost and computational cost of 5-20 forward passes. Finally, we show that invertible ResNets perform on par with standard ResNets on classifying MNIST and CIFAR10 images. 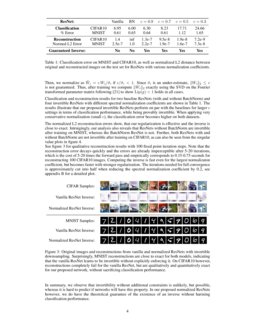 Reversible deep networks are one of the first classes of deep networks that provide statistical guarantees and access to key quantities like densities and gradients for generative modelling. Most notably, they allow for the exact computation of the determinant of their Jacobian, crucial for maximum-likelihood based generative models dinh2016density ; kingma2018glow ; chen2018neural . Further, they provide guarantees on mutual information between input and intermediate outputs, making them a suitable tool to analyze invariants of learned representations jacobsen2018irevnet ; anonymous2019excessive

. The ability to invert deep networks alleviates the need to store intermediate activations during backpropagation

gomez2017reversible ; Chang2018ReversibleAF and offers a promising approach in Inverse Problems (ardizzone2018analyzing, ). However, architectures used to achieve reversibility are typically restricted to have analytical inverses dinh2014nice .

Reversible networks rely on fixed dimension splitting heuristics, but common splittings interleaved with non-volume conserving elements are constraining and their choice has a big impact on performance

kingma2018glow ; dinh2016density . This makes building reversible networks a difficult task, while at the same time, it is unclear how such exotic designs relate to widely used architectures like ResNets (he2016identity, ).

Recently, instead of specifying a discrete architecture, it was proposed to parametrize the derivative of hidden states by a neural network

(chen2018neural, ; ffjord, ). This approach amounts to learning Lipschitz dynamics of an ordinary differential equation (ODE). While the ODE over a finite time interval is invertible (chen2018neural, ), the discretization relies on adaptive ODE solvers to guarantee accurate solutions. This induces computational costs which are hard to control and even get worse during training (ffjord, ). In contrast, ResNets have fixed computational cost. To close this gap, we leverage the viewpoint of ResNets as Euler discretization of ODEs (haberRuthotto, ; ruthottoHaber, ; luODE, ; naisnet, ) and prove that invertible ResNets can be constructed by simply changing the normalization scheme of standard ResNets. This approach allows unconstrained architectures for each residual block, while only requiring a Lipschitz constant smaller than one for each block. We numerically compute their inverse, which has O(1) memory cost. Finally, we show that invertible ResNets perform on par with their non-invertible counterparts on classifying MNIST and CIFAR10 images.

The remarkable similarity of ResNets and Euler-methods from ODEs

which amounts to the implicit backward Euler discretization. In particular, solving the dynamics backwards in time would implement an inverse of the corresponding ResNet. As stated in the following theorem, a simple condition suffices to make the dynamics solvable and thus renders the ResNet invertible.

Since ResNet Fθ is a composition of functions, it is invertible if each block Ftθ is invertible. Let xt+1∈Rd be arbitrary and consider the backward Euler discretization xt=xt+1−hfθt(xt)=xt+1−gθt(xt). Re-writing as a iteration yields

where limk→∞xkt=xt is the fixed point if the iteration converges. As gθt:Rd→Rd is an operator on a Banach space, the contraction condition Lip(gθt)<1 guarantees convergence due to the Banach fixed point theorem. ∎

The condition above was also stated in (anonymous2019information, ) (Appendix D), however, their proof restricts the domain of the residual block g to be bounded and applies only to linear operators g as the inverse was given by a convergent Neumann-series. Note, that the condition is not necessary, e.g. other approaches (dinh2014nice, ; dinh2016density, ; jacobsen2018irevnet, ; Chang2018ReversibleAF, ; kingma2018glow, ) rely on triangular structures to create analytical inverses. After proving above condition for invertible ResNets, we discuss connections to related approaches:

Invertibility and ODEs: While ResNets are only guaranteed to be invertible if each residual block is contractive (Lip(gθ)<1), ODEs given by

with Lipschitz continuous f(x(t),θ(t)) are reversible (chen2018neural, ). By choosing a scaling hgθ (time steps h), such that Lip(hgθ)<1, bijectivity of the ODE is preserved under the Euler discretization.

Stability of ODE: There are two main approaches to study stability of ODEs, 1) behavior for t→∞ and 2) Lipschitz stability over finite time intervals [0,T]. Based on time-invariant dynamics f(x(t)), (naisnet, ) constructed asymptotically stable ResNets using anti-symmetric layers such that Re(λ(Jx))<0 (with Re(λ(⋅))

denoting the real-part of eigenvalues,

ρ(⋅) spectral radius and Jxg the Jacobian at point x). By projecting weights based on the Gershgorin circle theorem, they further fulfilled ρ(Jxg)<1, yielding asymptotically stable ResNets with shared weights over layers. On the other hand, (haberRuthotto, ; ruthottoHaber, ) considered time-dependent dynamics f(x(t),θ(t)) corresponding to standard ResNets. Similarly, by using anti-symmetric layers they induced stability via leveraging the stability theory of time-invariant ODEs. Yet, the applicability of such an approach to non-linear, time-dependent dynamics is unclear as they only refer to kinematic eigenvalues (ascher1995numerical, ) which generalize the theory of linear time-invariant ODEs to some subclassses (e.g. diagonally dominant matrices, Example 3.7 in (ascher1995numerical, )) of time-dependent ODEs. Hence, a full understanding of the asymptotic stability of ODEs associated to standard ResNets remains open. Contrarily, initial value problems on [0,T] are well-posed for Lipschitz continuous dynamics (ascher2008numerical, ). Thus, the invertible ResNet with Lip(f)<1 can be understood as a stabilizer of an ODE for step size h=1 without a restriction to anti-symmetric layers as in (ruthottoHaber, ; haberRuthotto, ; naisnet, ).

with 55 bottleneck blocks on CIFAR10 and MNIST. All experiments use identical settings for all hyperparameters. We replace subsampling of strided convolution layers with "invertible downsampling" operations

jacobsen2018irevnet to allow invertibility, see appendix A for training and architectural details. To obtain the numerical inverse, we apply 100 fixed point iterations for each block. However, this is just to guarantee full convergence, but in practice much fewer iterations suffice. The trade-off between reconstruction error and number of iterations is analyzed in appendix B.

Satisfying Lip(g)≤c<1: We implement residual blocks as g=W3κ(W2κ(W1)), where Wi are convolutional layers and κ

, we directly estimate the spectral norm of

The normalized L2 reconstruction errors show, that our regularization is effective and the inverse is close to exact. Intruigingly, our analysis also reveals that ResNets without BatchNorm are invertible after training on MNIST, whereas the BatchNorm ResNet is not. Further, both ResNets with and without BatchNorm are not invertible after training on CIFAR10, as can also be seen from the singular value plots in figure 4. See figure 3 for qualitative reconstruction results with 100 fixed point iteration steps. Note that the reconstruction error decays quickly and the errors are already imperceptible after 5-20 iterations, which is the cost of 5-20 times the forward pass and empirically corresponds to 0.15-0.75 seconds for reconstructing 100 CIFAR10 images. Computing the inverse is fast even for the largest normalizaton coefficient, but becomes faster with stronger regularization. The iterations needed for full convergence is approximately cut into half when reducing the spectral normalization coefficient by 0.2, see appendix B for a detailed plot.

In summary, we observe that invertibility without additional constraints is unlikely, but possible, whereas it is hard to predict if networks will have this property. In our proposed normalized ResNets however, we do have the theoretical guarantee of the existence of an inverse without harming classification performance.

We use pre-activation ResNets with 55 convolutional bottleneck blocks with 3 convolution layers each and kernel sizes of 3x3, 1x1, 3x3 respectively. In the BatchNorm version, we apply a batch normalization before every ReLU activation function. The multiplier for the bottleneck is 4. The network has 2 downsampling stages after 18 and 36 blocks each and also concatenates zeros to its input, to increase the number of channels of the input by a factor of 4, a strategy initially described as injective iRevNet

We train for 200 epochs with momentum SGD and a learning rate of 0.1, decayed by a factor of 0.2 after 60, 120 and 160 epochs. Weight decay is set to 5e-4 and a dropout of probability 0.1 is applied in the residual block, which is also taken into account when choosing the normalization coefficients. We apply shifts for MNIST and shifts and flips for CIFAR10 as random data-augmentation during training. The inputs for MNIST are normalized to [-0.5,0.5] and for CIFAR10 as well, after preprocessing each image via subtracting the mean and dividing by the standard deviation of the training set.