Inverse of a Special Matrix and Application

The matrix inversion is an interesting topic in algebra mathematics. However, to determine an inverse matrix from a given matrix is required many computation tools and time resource if the size of matrix is huge. In this paper, we have shown an inverse closed form for an interesting matrix which has much applications in communication system. Base on this inverse closed form, the channel capacity closed form of a communication system can be determined via the error rate parameter alpha 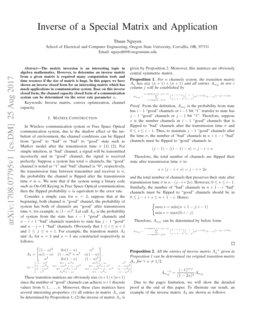 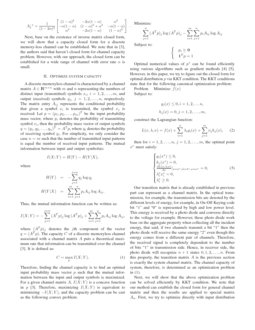 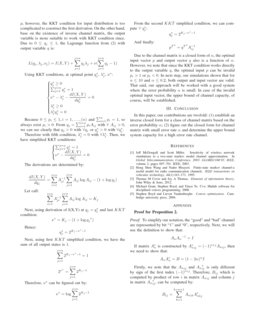 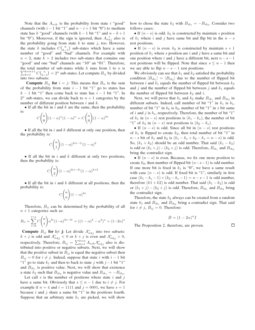 In Wireless communication system or Free Space Optical communication system, due to the shadow effect or the turbulent of environment, the channel conditions can be flipped from “good” to “bad” or “bad” to “good” state such as Markov model after the transmission time

, the probability the channel is flipped after the transmission time

σ is α. We note that if the system using a binary code such as On-Off Keying in Free Space Optical communication, then the flipped probability α is equivalent to the error rate.

Consider a simple case for n=2, suppose that at the beginning, both channel is “good” channel, the probability of system has both of channels are “good” after transmission time σ, for example, is (1−α)2. Let call Aij is the probability of system from the state has i−1 “good” channels and n−i+1 “bad” channels transfers to state has j−1 “good” and n−j+1 “bad” channels. Obviously that 1≤i≤n+1 and 1≤j≤n+1. For example, the transition matrix A2 and A3 for n=2 and n=3 are constructed respectively as follows:

These transition matrices are obviously size (n+1)×(n+1) since the number of “good” channels can achieve n+1 discrete values from 0,1,…,n. Moreover, these class matrices have several interesting properties: (1) all entries in matrix An can be determined by Proposition 1; (2) the inverse of matrix An is given by Proposition 2. Moreover, this matrices are obviously central symmetric matrix.

For n channels system, the transition matrix An has size (n+1)×(n+1) and all entries Anij in row i column j will be established by

Therefore, the total number of channels are flipped their state after transmission time σ is:

and the total number of channels that preserves their state after transmission time σ is n−(j−i+2s). However, 0≤s≤i−1. Similarly, the number of “bad” channels in n+1−i “bad” channels must be flipped to “good” channels should be in 0≤j−i+s≤n+1−i. Hence:

Therefore, Anij can be determined by below form:

All the entries of inverse matrix A−1n given in Proposition 1 can be determined via original transition matrix An for ∀ α≠1/2.

Due to the pages limitation, we will show the detailed proof at the end of this paper. To illustrate our result, an example of the inverse matrix A2 are shown as follows:

A discrete memoryless channel is characterized by a channel matrix A∈Rm×n with m and n representing the numbers of distinct input (transmitted) symbols xi, i=1,2,…,m, and output (received) symbols yj, j=1,2,…,n, respectively. The matrix entry Aij represents the conditional probability that given a symbol xi is transmitted, the symbol xj is received. Let p=(p1,p2,…,pm)T

be the input probability mass vector, where

Thus, the mutual information function can be written as:

where (ATp)j denotes the jth component of the vector q=(ATp). The capacity C of a discrete memoryless channel associated with a channel matrix A puts a theoretical maximum rate that information can be transmitted over the channel [cover2012elements]. It is defined as:

Therefore, finding the channel capacity is to find an optimal input probability mass vector p such that the mutual information between the input and output symbols is maximized. For a given channel matrix A, I(X;Y) is a concave function in p [cover2012elements]. Therefore, maximizing I(X;Y) is equivalent to minimizing −I(X;Y), and the capacity problem can be cast as the following convex problem:

Optimal numerical values of p∗ can be found efficiently using various algorithms such as gradient methods [grant2008cvx] [boyd2004convex]. However, in this paper, we try to figure out the closed form for optimal distribution p via KKT condition. The KKT conditions state that for the following canonical optimization problem:

Our transition matrix that is already established in previous part can represent as a channel matrix. In the optical transmission, for example, the transmission bits are denoted by the different levels of energy, for example, in On-Off Keying code bit “1” and “0” is represented by high and low power level. This energy is received by a photo diode and converse directly to the voltage for example. However, these photo diode work base on the aggregate property when collecting all the incident energy, that said, if two channels transmit a bit “1” then the photo diode will receive the same energy “2” even though this energy comes from a different pair of channels. Therefore, the received signal is completely dependent to the number of bits “1” in transmission side. Hence, in receiver side, the photo diode will recognize n+1 states 0,1,2,…,n. From this property, the transition matrix A is the previous section is exactly the system channel matrix. The channel capacity of system, therefore, is determined as an optimization problem in (1).

Next, we will show that the above optimization problem can be solved efficiently by KKT condition. We note that our method can establish the closed form for general channel matrix and then the results are applied to special matrix An. First, we try to optimize directly with input distribution p, however, the KKT condition for input distribution is too complicated to construct the first derivation. On the other hand, base on the existence of inverse channel matrix, the output variable is more suitable to work with KKT condition since. Due to 0≤qj≤1, the Lagrange function from (2) with output variable q is:

Therefore with fifth condition, λ∗j=0 with ∀λ∗j. Then, we have simplified KKT conditions:

The derivations are determined by:

Next, using derivation of I(X,Y) at qj=q∗j and last KKT condition:

Next, using first KKT simplified condition, we have the sum of all output states is 1.

Therefore, ν∗ can be figured out by:

From the second KKT simplified condition, we can compute ∀ q∗j:

Due to the channel matrix is a closed form of α, the optimal input vector p and output vector q also is a function of α. However, we note that since the KKT condition works directly to the output variable q, the optimal input p can be invalid pi>1 or pi<0. In next step, our simulations shown that for n≤10 and α≤0.2, both output and input vector are valid. That said, our approach will be worked with a good system where the error probability α is small. In case of the invalid optimal input vector, the upper bound of channel capacity, of course, will be established.