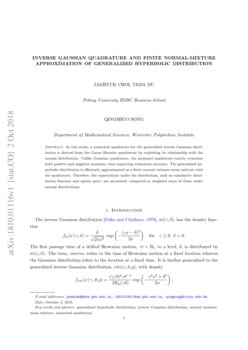 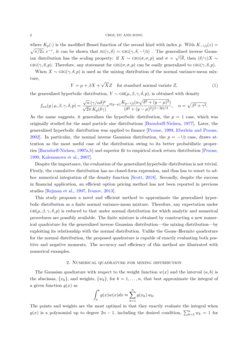 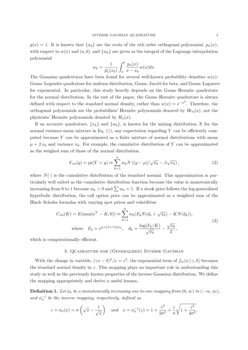 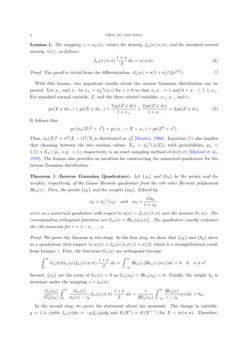 Evaluation of the Gauss integral

We introduce an approach to quickly and accurately approximate the cumul...
Mauricio Nascimento, et al. ∙

The inverse Gaussian distribution (Folks and Chhikara, 1978), \textscig(γ,δ), has the density function

The first passage time of a drifted Brownian motion, γt+Bt, to a level, δ, is distributed by \textscig(γ,δ). The term, inverse, refers to the time of Brownian motion at a fixed location whereas the Gaussian distribution refers to the location at a fixed time. It is further generalized to the generalized inverse Gaussian distribution, \textscgig(γ,δ,p), with density

When X∼\textscgig(γ,δ,p) is used as the mixing distribution of the normal variance-mean mixture,

the generalized hyperbolic distribution, Y∼\textscgh(μ,β,γ,δ,p), is obtained with density

Despite the importance, the evaluation of the generalized hyperbolic distribution is not trivial. Firstly, the cumulative distribution has no closed-form expression, and thus has to resort to ad-hoc numerical integration of the density function (Scott, 2018). Secondly, despite the success in financial application, an efficient option pricing method has not been reported in previous studies (Rejman et al., 1997; Ivanov, 2013).

The Gaussian quadrature with respect to the weight function w(x) and the interval (a,b) is the abscissas, {xk}, and weights, {wk}, for k=1,…,n, that best approximate the integral of a given function g(x) as

The points and weights are the most optimal in that they exactly evaluate the integral when g(x) is a polynomial up to degree 2n−1, including the desired condition, ∑nk=1wk=1 for g(x)=1. It is known that {xk} are the roots of the nth order orthogonal polynomial, pn(x), with respect to w(x) and (a,b), and {wk}

are given as the integral of the Lagrange interpolation polynomial

which is computationally efficient.

With the change in variable, (γx−δ)2/x=z2, the exponential term of f\textscig(x|γ,δ) becomes the standard normal density in z. This mapping plays an important role in understanding this study as well as the previously known properties of the inverse Gaussian distribution. We define the mapping appropriately and derive a useful lemma.

Let ϕσ be a monotonically increasing one-to-one mapping from (0,∞) to (−∞,∞), and ϕ−1σ be the inverse mapping, respectively, defined as

The mapping, z=ϕσ(x), relates the density, f\textscig(x|σ,σ), and the standard normal density, n(z), as follows:

serve as a numerical quadrature with respect to w(x)=f\textscig(x|σ,σ) over the domain (0,∞). The corresponding orthogonal functions are Gn(x)=Hen(ϕσ(x)). The quadrature exactly evaluates the rth moments for r=1−n,…,n.

We prove the theorem in two steps. In the first step, we show that {xk} and {hk} serve as a quadrature with respect to w(x)=f\textscig(x|σ,σ)(1+x)/2, which is a straightforward result from Lemma 1. First, the functions Gn(x) are orthogonal because

In the second step, we prove the statement about the moments. The change in variable, y=1/x yields f\textscig(x)dx=−yf\textscig(y)dy and E(Xr)=E(X1−r) for X∼\textscig(σ,σ). Therefore, using the previous step, the rth moment for integer r≥1 is cast into the integration with the Gauss–Hermite quadrature:

The following comments can be made on the new quadrature. First, the orthogonal functions, Gn(x), are not polynomials of x; therefore, the quadrature is not a Gaussian quadrature. Given below are a few first orders of Gn(x) for \textscig(1,1) obtained from Hen(z):

{zk} with probabilities {hk}, instead of the true normal random variable. This study is originally motivated by this observation.

From the observation of the density functions, f\textscig(x|σ,σ) and f\textscgig(x|σ,σ,p), which are related by

we further generalize the quadrature to the generalized inverse Gaussian distribution.

Note that if α is not an integer, ∑nk=1¯wk=1 is not guaranteed; therefore, it is recommended to scale {¯wk} by the factor of 1/∑nk=1¯wk to ensure ∑nk=1¯wk=1. However, the numerical experiments in the next section show that the amount of adjustment is very small for reasonably large n.

We test the proposed quadrature numerically. First, we evaluate the moments of the inverse Gaussian distribution as a function of the order r. The moment of ¯X∼\textscgig(σ,σ,p) has a close-form expression

against which the error of the quadrature evaluation can be measured. Figure 1 shows the log10 of the relative error of E(Xr) for X∼\textscig(1,1) when evaluated with n=10 and 20. As Theorem 1 predicts, the quadrature exactly evaluates the moments for integer r from 1−n to n. The error for non-integer r is also reasonably small when 1−n≤r≤n. The relative error of E(Xr) can also be interpreted as that of E(¯X0=1)=∑n1¯wk for ¯X∼\textscgig(1,1,r−\sfrac12); thus, the sum of ¯wk is similarly close to 1.

Next, we evaluate the cumulative distribution function of the generalized hyperbolic distribution using Eq. (2). We test the normal inverse Gaussian (p=−\sfrac12) and the hyperbolic distribution (p=1). Figure 2 depicts the errors as functions of the quadrature size n. The exact values are obtained with the GeneralizedHyperbolic R package based on adaptive quadrature integration (Scott, 2018). Despite that the expectation involves ill-behaving terms such as √xk and 1/√xk, the quadrature evaluation shows good accuracy; the error quickly converges to the order of 10−10 around n=55 for both cases although the convergence rate is slower than exponential. The good accuracy is attributed to the accurate handling of both positive and negative moments by the generalized inverse Gaussian quadrature. As previously confirmed, the correction on the weights, {¯wk}, has negligible effect on the error amount.

We believe that this study facilitates subsequent research in a few directions. First, with the efficient option pricing method in Eq. (3

(Karlis, 2002) can be improved as it can be performed in the context of the finite normal mixture with constraints. Third, the generalized inverse Gaussian quadrature, combined with spline interpolation, can be used as a method for generating random numbers for \textscgig(γ,δ,p) and \textscgh(μ,β,γ,δ,p) with p≠\sfrac12, alternative to the method of Dagpunar (1989).