Modern automatic speech recognition (ASR) systems need to be robust under acoustic variability arising from environmental, speaker, channel, and recording conditions. Ensuring such robustness to variability is a challenge in modern day neural network-based ASR systems, especially when all types of variability are not seen during training. We attempt to address this problem by encouraging the neural network acoustic model to learn invariant feature representations. We use ideas from recent research on image generation using Generative Adversarial Networks and domain adaptation ideas extending adversarial gradient-based training. A recent work from Ganin et al. proposes to use adversarial training for image domain adaptation by using an intermediate representation from the main target classification network to deteriorate the domain classifier performance through a separate neural network. Our work focuses on investigating neural architectures which produce representations invariant to noise conditions for ASR. We evaluate the proposed architecture on the Aurora-4 task, a popular benchmark for noise robust ASR. We show that our method generalizes better than the standard multi-condition training especially when only a few noise categories are seen during training. 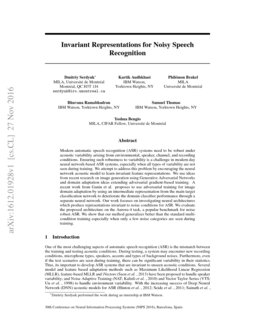 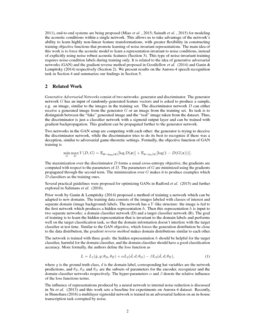 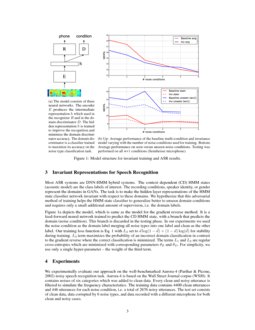 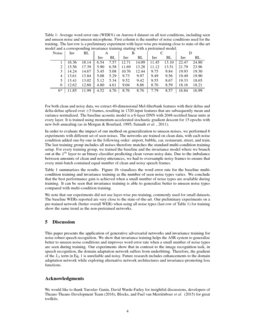 In this work, we investigate the joint use of articulatory and acoustic ...
Emre Yilmaz, et al. ∙

In spite of the recent success of Dialogue Act (DA) classification, the ...
Xuanli He, et al. ∙

One of the most challenging aspects of automatic speech recognition (ASR) is the mismatch between the training and testing acoustic conditions. During testing, a system may encounter new recording conditions, microphone types, speakers, accents and types of background noises. Furthermore, even if the test scenarios are seen during training, there can be significant variability in their statistics. Thus, its important to develop ASR systems that are invariant to unseen acoustic conditions. Several model and feature based adaptation methods such as Maximum Likelihood Linear Regression (MLLR), feature-based MLLR and iVectors

(VTS; Un et al. , 1998) to handle environment variability. With the increasing success of Deep Neural Network (DNN) acoustic models for ASR (Hinton et al. , 2012; Seide et al. , 2011; Sainath et al. , 2011), end-to-end systems are being proposed (Miao et al. , 2015; Sainath et al. , 2015) for modeling the acoustic conditions within a single network. This allows us to take advantage of the network’s ability to learn highly non-linear feature transformations, with greater flexibility in constructing training objective functions that promote learning of noise invariant representations. The main idea of this work is to force the acoustic model to learn a representation invariant to noise conditions, instead of explicitly using noise robust acoustic features (Section 3). This type of noise-invariant training requires noise-condition labels during training only. It is related to the idea of generative adversarial networks (GAN) and the gradient reverse method proposed in Goodfellow et al.  (2014) and Ganin & Lempitsky (2014) respectively (Section 2). We present results on the Aurora-4 speech recognition task in Section 4 and summarize our findings in Section 5.

Generative Adversarial Networks consist of two networks: generator and discriminator. The generator network G has an input of randomly-generated feature vectors and is asked to produce a sample, e.g. an image, similar to the images in the training set. The discriminator network D can either receive a generated image from the generator G

or an image from the training set. Its task is to distinguish between the “fake” generated image and the “real” image taken from the dataset. Thus, the discriminator is just a classifier network with a sigmoid output layer and can be trained with gradient backpropagation. This gradient can be propagated further to the generator network.

Two networks in the GAN setup are competing with each other: the generator is trying to deceive the discriminator network, while the discriminator tries to do its best to recognize if there was a deception, similar to adversarial game-theoretic settings. Formally, the objective function of GAN training is

Prior work by Ganin & Lempitsky (2014) proposed a method of training a network which can be adapted to new domains. The training data consists of the images labeled with classes of interest and separate domain (image background) labels. The network has a Y

-like structure: the image is fed to the first network which produces a hidden representation

The network is trained with three goals: the hidden representation h

where y is the ground truth class, d is the domain label, corresponding hat variables are the network predictions, and θE,θR and θD are the subsets of parameters for the encoder, recognizer and the domain classifier networks respectively. The hyper-parameters α and β denote the relative influence of the loss functions terms.

The influence of representations produced by a neural network to internal noise reduction is discussed in Yu et al.  (2013) and this work sets a baseline for experiments on Aurora-4 dataset. Recently, in Shunohara (2016) a multilayer sigmoidal network is trained in an adversarial fashion on an in-house transcription task corrupted by noise.

Most ASR systems are DNN-HMM hybrid systems. The context dependent (CD) HMM states (acoustic model) are the class labels of interest. The recording conditions, speaker identity, or gender represent the domains in GANs. The task is to make the hidden layer representations of the HMM state classifier network invariant with respect to these domains. We hypothesize that this adversarial method of training helps the HMM state classifier to generalize better to unseen domain conditions and requires only a small additional amount of supervision, i.e. the domain labels.

depicts the model, which is same as the model for the gradient reverse method. It is a feed-forward neural network trained to predict the CD HMM state, with a branch that predicts the domain (noise condition). This branch is discarded in the testing phase. In our experiments we used the noise condition as the domain label merging all noise types into one label and clean as the other label. Our training loss function is Eq.

L1 and L2 are regular cross-entropies which are minimized with corresponding parameters θE and θD. For simplicity, we use only a single hyper-parameter – the weight of the third term.

We experimentally evaluate our approach on the well-benchmarked Aurora-4 (Parihar & Picone, 2002) noisy speech recognition task. Aurora-4 is based on the Wall Street Journal corpus (WSJ0). It contains noises of six categories which was added to clean data. Every clean and noisy utterance is filtered to simulate the frequency characteristics. The training data contains 4400 clean utterances and 446 utterances for each noise condition, i.e. a total of 2676 noisy utterances. The test set consists of clean data, data corrupted by 6 noise types, and data recorded with a different microphone for both clean and noisy cases.

For both clean and noisy data, we extract 40-dimensional Mel-filterbank features with their deltas and delta-deltas spliced over ±

5 frames, resulting in 1320 input features that are subsequently mean and variance normalized. The baseline acoustic model is a 6-layer DNN with 2048 rectified linear units at every layer. It is trained using momentum-accelerated stochastic gradient descent for 15 epochs with new-bob annealing

In order to evaluate the impact of our method on generalization to unseen noises, we performed 6 experiments with different set of seen noises. The networks are trained on clean data, with each noise condition added one-by-one in the following order: airport, babble, car, restaurant, street, and train. The last training group includes all noises therefore matches the standard multi-condition training setup. For every training group, we trained the baseline and the invariance model where we branch out at the 4th layer to an binary classifier predicting clean versus noisy data. Due to the imbalance between amounts of clean and noisy utterances, we had to oversample noisy frames to ensure that every mini-batch contained equal number of clean and noisy speech frames.

We note that our experiments did not use layer-wise pre-training, commonly used for small datasets. The baseline WERs reported are very close to the state-of-the-art. Our preliminary experiments on a pre-trained network (better overall WER) when using all noise types (last row of Table 1) for training show the same trend as the non-pretrained networks.

This paper presents the application of generative adversarial networks and invariance training for noise robust speech recognition. We show that invariance training helps the ASR system to generalize better to unseen noise conditions and improves word error rate when a small number of noise types are seen during training. Our experiments show that in contrast to the image recognition task, in speech recognition, the domain adaptation network suffers from underfitting. Therefore, the gradient of the L3 term in Eq. 1 is unreliable and noisy. Future research includes enhancements to the domain adaptation network while exploring alternative network architectures and invariance-promoting loss functions.

We would like to thank Yaroslav Ganin, David Warde-Farley for insightful discussions, developers of Theano