Blau and Michaeli recently introduced a novel concept for inverse problems of signal processing, that is, the perception-distortion tradeoff. We introduce their tradeoff into the rate distortion theory of lossy source coding in information theory, and clarify the tradeoff among information rate, distortion and perception for general information sources. 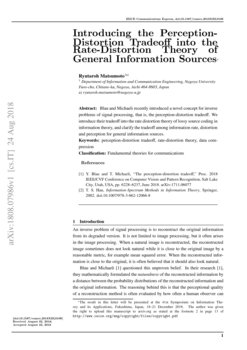 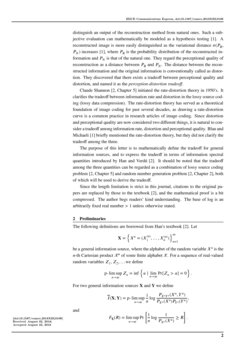 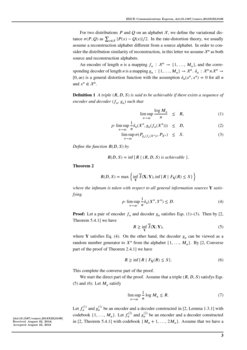 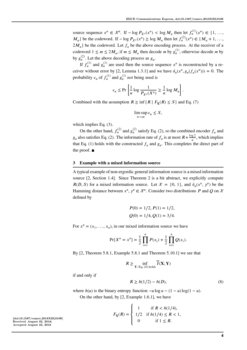 Blau and Michaeli [1] questioned this unproven belief. In their research [1], they mathematically formulated the naturalness

Since the length limitation is strict in this journal, citations to the original papers are replaced by those to the textbook [2], and the mathematical proof is a bit compressed. The author begs readers’ kind understanding. The base of log is an arbitrarily fixed real number >1 unless otherwise stated.

The following definitions are borrowed from Han’s textbook [2]. Let

be a general information source, where the alphabet of the random variable

Xn is the n-th Cartesian product Xn of some finite alphabet X. For a sequence of real-valued random variables Z1, Z2, …we define

For two general information sources X and Y we define

A triple (R,D,S) is said to be achievable if there exists a sequence of encoder and decoder (fn, gn) such that

Define the function R(D,S) by

This complete the converse part of the proof.

Combined with the assumption R≥inf{R∣FX(R)≤S} and Eq. (7)

On the other hand, f(2)n and g(2)n satisfy Eq. (2), so the combined encoder fn and gn also satisfies Eq. (2). The information rate of fn is at most R+log2n, which implies that Eq. (1) holds with the constructed fn and gn. This completes the direct part of the proof.

3 Example with a mixed information source

if and only if

By the above formulas and assuming log=log2, we can see

The author would like to thank Dr. Tetsunao Matsuta for the helpful discussions.