Video-based person re-id has drawn much attention in recent years due to its prospective applications in video surveillance. Most existing methods concentrate on how to represent discriminative clip-level features. Moreover, clip-level data augmentation is also important, especially for temporal aggregation task. Inconsistent intra-clip augmentation will collapse inter-frame alignment, thus bringing in additional noise. To tackle the above-motioned problems, we design a novel framework for video-based person re-id, which consists of two main modules: Synchronized Transformation (ST) and Intra-clip Aggregation (ICA). The former module augments intra-clip frames with the same probability and the same operation, while the latter leverages two-level intra-clip encoding to generate more discriminative clip-level features. To confirm the advantage of synchronized transformation, we conduct ablation study with different synchronized transformation scheme. We also perform cross-dataset experiment to better understand the generality of our method. Extensive experiments on three benchmark datasets demonstrate that our framework outperforming the most of recent state-of-the-art methods. 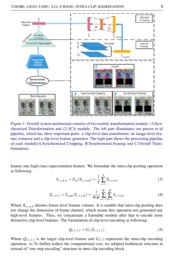 Person re-identification (Re-id) aims to recognize the same person in different images or videos captured by different cameras distributed at separated physical locations. With the emergence of deep learning methods within recent years and their influence on the computer domain, video-based person re-id is in high demand for video surveillance and has driven significant progress. Specifically, video-based person re-id is a generalized image-based person re-id problem. Given a query video of one person and a gallery set which contains a number of candidate videos, the system aims to compute the clip-level distance metric and find the query person.

concentrate on taking full use of inter-clip temporal information to alleviate the spatial noise. Unfortunately, in those method, extracting temporal information between two consecutive frames need much more parameters and lead to an excessively heavy computational complexity. To effective harness the multi-frame information while maintains low computational cost, temporal pooling has been widely used in most existing method as the temporal aggregation scheme, which represent each frame as feature vector and then aggregate them across time using average or maximum pooing

[Farenzena et al.(2010)Farenzena, Bazzani, Perina, Murino, and Cristani, Gao and Nevatia(2018), Li et al.(2018)Li, Bak, Carr, and Wang]. However, directly average of max the frame-level features may destroy the dependency between each feature, which means original feature domains has been changed. Moreover, temporal pooling is a non-parameter operation, which not able to learn rich information from the new domain. Thus the aggregated clip-level features may not be sufficiently discriminative for identifying different persons. In this paper, we propose a Intra-clip Aggregation (ICA) module that aggregate the frame-level features and then use a group of convolution kernels to learn the distinctive clip-level features. Instead of only encoding the whole frame once time, we concatenate a learnable module after temporal pooling operation in order to learn much more information from clip-level feature. To maintain relative fewer parameters, we design the learnable module with a bottleneck structure, following ResNet [He et al.(2016)He, Zhang, Ren, and Sun]. Due to the over-fitting trap, we conduct cross-dataset experiment to prove the generality of our model. Data augmentation is a crucial image-wise initialization technique as well as parameter-wise initialization in networks [He et al.(2015)He, Zhang, Ren, and Sun, Glorot and Bengio(2010)]. In particular, video-based person re-id is essential to clip-level distance metric learning tasks. Handling a sequence of images inconsistently will collapse inter-frame alignment, thus bring in additional noise. To our knowledge, the prior work  [Song et al.(2018)Song, Leng, Liu, Hetang, and Cai, Gao and Nevatia(2018), Li et al.(2018)Li, Bak, Carr, and Wang] employ image-level data augmentation techniques to randomly augmented each frame (e.g.cropping). In order to deal with the unreasonable data augmentation in video-based person re-id, we synchronically augments the inter-clip frames with cropping, flipping as well as erasing [Krizhevsky et al.(2012)Krizhevsky, Sutskever, and Hinton, Zhong et al.(2017)Zhong, Zheng, Kang, Li, and Yang].

The rest part of this paper is organized as follows, We first give an overview of related work in Sec 2, then we introduce the overall system framework for video-based re-id in Sec 3, and describe the proposed approach in details. In Sec 4, we conduct and analyze the proposed method by extensive experiments and comparisons with other methods.

In this section, we describe the temporal data augmentation (temporal Transform) techniques in details. Our scheme expands the image-level augmentation techniques to clip-level, which uniformly transforms all frame of a given sequence, just like artificially cropping or erasing the same patch of each frame. We formulate the random transformation and synchronized transformation as following.

Where Trt and Tst is the operation of image augmentation and temporal augmentation. {fkc}Tk=1 denotes the set of frames of a given sequence. {Ψ3,Ψ2,Ψ1}and {Υ3,Υ2,Υ1} represent three type of image-level and clip-level data augmentation techniques respectively. As illuminated in Figure 1, we implement temporal transform on data processing layer, which incorporates three-part synchronized augmentation techniques: cropping, flipping and erasing. To further analyze the performance of temporal augmentation, we conduct exploratory experiment on Sec.4.2 and present a group of visualization result to support our analysis.

Where Xt,c,w,h denotes frame-level feature volume. It is notable that intra-clip pooling does not change the dimension of frame channel, which means this operation not generated any high-level features. Thus, we concatenate a learnable module after that to encode more distinctive clip-level features. The formulation of clip-level encoding as following:

In this section, we thoroughly evaluate the proposed intra-clip aggregation module and clip-level data augmentation technique on popular benchmark video re-id datasets. Firstly, we introduce the experimental setting and implementation details in Sec 4.1, and then conduct ablation study and present a group of visualization to support the ablation analysis in Sec 2.2. In Sec 4.3, we compare the performance of our method with state-of-the-art. At last, we perform cross-dataset evalution to verify the generalization of the proposed method.

Datasets. We conduct experiments on three commonly used video-based person re-id datasets, including ILIDS-VID, PRID 2011 and MARS. (a) The ILIDS-VID dataset is composed of 600 video sequences of 300 distinct pedestrians observed in two non-overlapping cameras views. The length of each video sequences varies from 23 to 192, with an average number of 73 frames. The train and test set are splited evenly of 150 identities. It is a challenging dataset due to random occlusion, cluttered background as well as drastically variation in illumination and blur. (b) The PRID 2011 datasets is another standard benchmark for video-based person re-id. It contains 400 image sequences for 200 pedestrians from two non-overlapping cameras. Following [Dai et al.(2019)Dai, Zhang, Wang, Lu, and Wang, You et al.(2016)You, Wu, Li, and Zheng]

, video sequences with more than 21 frames are used. Finally, the experimental dataset contains 356 image sequences for 178 identities in total. Compared with ILIDS-VID, PRID 2011 dataset, which collected in uncrowded scenes with relatively clean backgrounds and rare occlusions. (c) The MARS is the one of the largest datasets, which consists of 1,261 different IDs and around 20,000 “tracklets” (image sequence) from 6 cameras. Each IDs, which is observed by at least 2 cameras, has 13.2 tracklets on average. All tractlets are obtained by computer vision algorithm which make the dataset more challenging than datasets above. We evaluate the performance of proposed method on ILIDS-VID and MARS, and perform cross-dataset evaluation on PRID2011.

Evaluation Protocols. In our experiments, we follow the popular evaluation protocol: mean average precision (mAP) score and cumulative matching characteristic (CMC) curve. For the MARS dataset, we adopt mAP score and the CMC curve at Rank-1, Rank-5, Rank-10, Rank-20 to evaluate re-id performance. For both PRID 2011 and ILIDS-VID, Rank-1, Rank-5, Rank-10 and Rank-20 score of the CMC curve are reported. Implementation Details. During training, we adopt Adam [Kingma and Ba(2014)], as the optimizer to minimize the loss function with standard back-propagation, where batch size is set to 64 for MARS and 32 for ILIDS-VID since the last dataset is relatively small. There are PK clips in a batch, we set K=4 (identities), P=16 (clips of each person) and K=4, P=8 for MARS and ILIDS-VID respectively; Where all of P and K are randomly sampled. Each input sequence is augmented with synchronized transformation and re-sized the all frames of a given sequence to 224×112×3. Standard ResNet-50 [He et al.(2016)He, Zhang, Ren, and Sun] pretrained on ImagegNet is used as the feature extractor. We set a smaller learning rate in our experiment, which initialized as 0.0004 and decreases to its 1200

every 200 epochs. The weight of ICA and classifier are initialized the same as ResNet strategy

[He et al.(2015)He, Zhang, Ren, and Sun]. We use both triplet loss and cross-entropy loss [Bishop(2006)] to train out network. During testing, we not use synchronized transformation techniques, except for re-size the input frames to 224×112×3. To calculate the similarity between query and gallery video, we average all clip level feature vector fcp one IDs to represent the IDs feature vector ¯fp, and then compute the metric distance with query feature vector ¯q. To prove the generality of our method, cross-data evaluation is conducted on PRID2011 by utilized the best model trained on ILIDS-VID.

To support our analysis we gives a group of visualization result in Figure 3, which illustrates the frame of ID1 to ID10 after random or synchronized transformation. We use ImageNet pre-trained ResNet50 to extract each frame feature and reduce its dimensionality to visualize

[Maaten and Hinton(2008)]. We selected 2 clips from each ID and each clip contains 16 frames. We can see that the frames of intra-class clip are more assembly after synchronized transformation.

For fair comparisons the performance, we set the sequence length T=4 according to the other temporal aggregation method setting. We use our best result to compare with previous state-of-the-art results in Table 3. The first three methods [Liu et al.(2017)Liu, Yan, and Ouyang, Liu et al.(2018a)Liu, Jie, Jayashree, Qi, Jiang, Yan, and Feng, Su et al.(2018)Su, Zou, Cheng, Xu, Yu, and Zhou] focus on jointly employing frame-level spatial features and frame-wise motion clues from a collection of optical flow to represent clip-level features. The fourth [Liao et al.(2018)Liao, He, and Yang] contributed to use a succession of “one-step" convolution kernel to extract the spatial-temporal features simultaneously from a video-volume. The last five methods [Dai et al.(2019)Dai, Zhang, Wang, Lu, and Wang, Su et al.(2018)Su, Zou, Cheng, Xu, Yu, and Zhou, Li et al.(2018)Li, Bak, Carr, and Wang, Gao and Nevatia(2018), Liu et al.(2018b)Liu, Yuan, Zhou, and Li] concentrate on aggregating intra-clip frames over temporal dimension to represent a clip-level feature. We can see that our best result achieves consistently superior performance over the recent state-of-the-art methods. To verify the generality of our method, we will conduct cross-dataset evaluation with our best model in Sec 4.4.

Due to the over-fitting trap, the model trained on one dataset would exhibit poor performance on another. To better understand the generalization performance of our method, we conducted cross-dataset experiment which where using the best model trained on ILIDS-VID and tested on PRID2011. Table 4 revealed that our results achieves consistently superior performance over other method, which demonstrates our model has certain generalization for the cross-dataset testing.

In this paper, we focus on the problem of unaligned intra-clip data initialization and distinctive clip-level feature representation for video-based person re-id. To handle the above-mentioned problem,we design a novel framework for video-based person re-id, which consists of two main modules: Synchronized Transformation (ST) and Intra-clip Aggregation (ICA). The former module augments intra-clip frames with the same probability and the same operation, while the latter leverages two-level intra-clip encoding to generate more discriminative clip-level features. We conduct ablation study to analyze the effects of each module. Extensive experiments conducted on two benchmarks including MARS and ILIDS-VID demonstrate the synchronized transformation and ICA module are beneficial to intra-clip aggregation. Furthermore, we perform the cross-dataset evalution with our best model to show the generality of our method.